The latest iteration of Schindler’s destination-dispatch elevator technology, myPORT creates a smart-building access system with users’ cellphones. “What started out as a way to get better perfor­mance from elevators has become a sophisticated interface,” says Jeff Blain, manager of destination products for the company. The free iPhone and Android app employs Bluetooth technology to summon an elevator. But it’s able to unlock and open doors, too: a boon for disabled users.

The myPORT app serves as a building key, allowing registered residents to pass security; it then calls an elevator for them. Residents can also send visitors a text message with a unique color video that can be used at a myPORT terminal for onetime entry. Schindler tried QR codes for this feature, says Blain, but the images’ geometry tended to misalign; the video works no matter how a phone screen is held to the scanner. “We couldn’t find the right technology,” he notes, so Schindler developed its own.

Introduced stateside last spring, myPORT is in use at the new ground-floor headquarters of the Independent Living Resource Center of San Francisco (ILRCSF), a disability-rights advocacy organization Schindler had previously partnered with on product development. All ILRCSF employees have some sort of physical or mental challenge, and the system assists them with entry and office doors. The partnership offers the manu-facturer an intimate opportunity to “understand those with special needs,” says Blain. It also gives Schindler a chance to study how myPORT can facilitate independence and seamless movement for all. 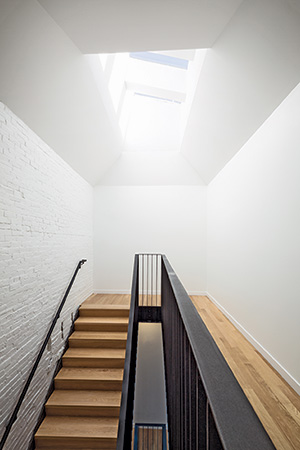 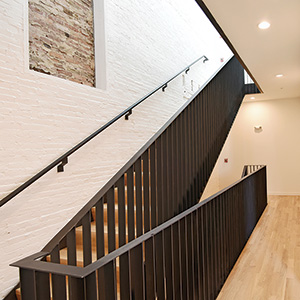 When present architecture undertook the revitalization of 660 Congress Street in Portland, Maine, the boarded-up 1886 building came with a landmarked facade and a burned-out interior. Given this blank slate, firm cofounders Andre Guimond and Evan Erlebacher took every opportunity to showcase their pro­cliv­ity for subdued modernism throughout the building, most notably in the custom-designed, blackened-steel interior stairway con- necting the residences on the second and third floors.

The New York City–based architects settled on a metal balustrade early in the design process. Guimond said their initial ideas, which ranged from “opaque and solid to organic or algorithmic,” reflected the partners’ earlier stints at Toyo Ito (Guimond) and Zaha Hadid (Erlebacher). Yet the final, understated solution—thin but wide balusters that alternate between fine and solid vertical lines—embodies the evolving style of the pair’s five-year-old studio.

Guimond credits the fabricators at Cumberland Ironworks and Larry Wichroski of Engineering Design Professionals with helping Present Architecture understand what was tech­nically and structurally feasible within the client’s $52,000 stair budget ($29,000 of it went to metalwork). Cumberland shop-fabricated the staircase in four pieces, which were then trucked to the jobsite and threaded through the front-door opening. The entire process, completed in one day, proved faster and more accurate than on-site fabrication would have been.

With the stairway, Guimond explains, “we wanted to be sensitive to the existing building.” But the journey to the winning design, he adds, helped Erlebacher and him “better understand where [the firm] was headed ” both stylistically and intellectually. —BA