Architect Jefferson Browne says “awesome” a lot when discussing Space Crab, a treehouse he built for Camp Southern Ground in Peachtree City, Georgia. One look at the 1,000-square-foot domed space reveals why. The structure—a cross between a spaceship and a horse­shoe crab—is a stunning addition to the camp, which is devoted to the educational and emotional growth of children, especially those with disabilities.

Originally envisioned as a 300-square-foot retreat, the treehouse grew in response to calls for “maximum acces-sibility and a barrier-free experience of the outdoors,” says Browne. To that end, the structure’s entrance features two 9-foot-high, nearly 10-foot-wide doorways from C.R. Laurence’s S80 Series Monterey bifold glass wall system. The black-frame doors, which tuck into exterior nooks, offer an expansive view of the surrounding woods, creating a seamless indoor/outdoor connection to the 300-square-foot deck. The doors also facilitate access to the uncovered ADA-compliant ramp that winds from the deck to ground level, at 14 feet below.

Monterey’s top-hung doors and flush threshold, as well as the doors’ ability to disappear, proved essential to the tree­house’s final design. To allow for the largest capacity possible, “we needed to ensure the doors cleared an exterior cantilevered roof beam,” says Browne. So they did. The structure can now accommodate a group of 49 when its entryways are fully open.

The camp currently welcomes children in the fall on a weekend-only basis; the plan is to expand to weeklong summer sessions by 2018. The treehouse, however, is already providing a regular gathering place for adults, whether they’re attending corporate events or training sessions for veterans wrestling with posttraumatic stress disorder. It’s a peaceful, airy retreat for all that is, in a word, awesome. 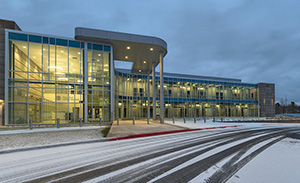 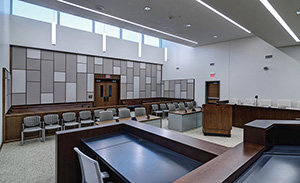 Rooftop clerestories allow sunlight to flow into the courtrooms.

To achieve their aim, the firms opted to make the north face of the low-slung, 81,200-square-foot building, which houses the county’s family courts, almost entirely glass. The structure’s strategically placed rooftop clerestories also bring illumination deep into the structure, courtrooms included. “The concept was to put public and hearing-room entries along that facade,” says Jason Novotny, director of design at TowerPinkster. That way, he continues, instead of being a dark, double-loaded space, the corridor along the facade “would be filled with diffuse light.”

The firm turned to Tubelite when it came to the requisite transparency and security, specifying more than 14,000 square feet of storefront, framing, and other products. The manufacturer’s 400 Series curtain wall, in particular, helped the team realize its design vision, in which the north facade was composed of a series of differently sized rectangles and squares.

Aside from letting the sunshine in, these varied glass shapes mitigate the imposing presence that court build­ings traditionally possess. “Since this was a family court,” TowerPinkster’s Novotny explains, “we wanted to get away from [the usual] daunting hier­archy and provide a softer feel and a sense of clarity and individuality.” You’ll find no objection here. —BA