Sacramento, California, benefits from a temperate cli­mate that encourages outdoor living. Expansive, operable openings are common in the buildings and homes as everyone—the local NBA team included—wants to take advantage of the region’s cooling Delta Breeze. To that end, design and engineering firm AECOM added five lift-strap bifold doors from Schweiss to the primary entrance of Golden 1 Center, a 17,500-seat arena that serves as the home base of the Golden State Warriors.

Each door weighs about 28,000 pounds and measures 41 1⁄2 feet high by at least 29 feet wide. Three lean from the build­ing at an 11-degree angle, allowing them to provide shade and prevent glare. When closed, the doors don’t reach the ground; rather, they sit atop a permanent, conventionally scaled turnstile entryway system.

Figuring out how to produce the canted doors required eight months of effort and numerous customizations.

Where openings of this size would normally require at least 10 straps per door, the architects insisted on only five, says Schweiss owner Mike Schweiss. The client also requested that the fasteners be spaced so they would disappear behind the doors’ vertical mullions when viewed from the exterior. To achieve both aims, the fabricators extended the straps to six inches—double the normal size—and reengineered the lift widgetry to accommodate the larger spans. Glaziers Bagatelos Architectural Glass also added a three-inch-deep aluminum curtain wall to accommodate the doors’ massive expanses of steel-tube framing.

The copious light, fresh air, and natural cooling provided by the Schweiss entryways are some of many reasons that Golden 1 received a LEED Platinum rating, a first for an enclosed arena. Says Schweiss of the project: “It took us out of our comfort zone and tested us in every which way.” 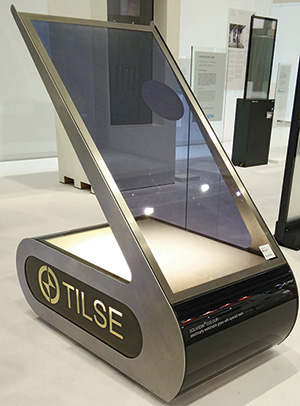 Germany’s Fraunhofer Institute of Polymer Research worked with yacht glazing specialist Tilse Formglas to develop a method of producing electro-chromic glass that allows for pane colors other than the standard blue.

Electrochromic glass is a modern marvel. It goes from translucent to opaque when a charge is added, offering privacy and minimizing solar heat gain, thus eliminating the need for blinds or drapes. This optic effect has historically been created by coating two panes with tin oxide—which makes the glass electrically conductive—and then adding a layer of tung­­- sten oxide to one of them. When voltage is applied, the oxide’s ions undergo a chemical reaction, temporarily turning dark blue. Since tungsten is always used, all activated electrochromic glass is blue. But that might soon change.

In early January, Germany’s Fraunhofer Institute for Applied Polymer Research (Fraunhofer IAP) announced a manufacturing method for electrochromic glass that could allow for multiple color options. The new process replaces the reactive oxide coating with a mixture of organic monomers, resin, and electrochromic molecules. Alter the par­tic­ular monomer, the researchers discovered, and you alter the color of the glass.

Monomers have advantages beyond aesthetics. According to Fraunhofer IAP scientist Volker Eberhardt, they require less energy than oxides to react; their reaction time is also up to 30 times faster. (This new process turns a 13-square-foot pane of glass totally dark in 20 to 30 seconds, rather than the 10 minutes it now takes.) Furthermore, the resin fortifies the electrochromic glass, making it sturdier than current iterations. “A pane comprising just two layers can be used as overhead glazing or in surfaces meant to be walked upon,” says Eberhardt of the new formulation, noting it now takes three or four panes to achieve similar strength. Using less material means cost savings. That’s some shady business we all can get behind. —BA