From its beginnings in the 1920s to the breakup of the Ma Bell monopoly six decades later, Bell Labs—the new-technology division of AT&T—was arguably the most successful corporate research organization in the world. Among its scientists’ achievements were the development of the transistor, the continuously operated laser beam, and cellular networks. The institution’s researchers were so prolific, and their work so consequential, that they garnered six Nobel prizes, including one for a discovery that confirmed the big bang theory.

The site of many of these breakthroughs was an immense mirrored-glass box in suburban Holmdel, New Jersey. The original portion of the structure, designed by Eero Saarinen and Associates and completed in phases in 1962 and 1964, sat on 472 pastoral acres and was surrounded by a rolling landscape created by Sasaki, Walker and Associates, with lagoons, lawns, groves of trees, and 5,000 parking spaces. Expanded in the 1980s by the Saarinen successor firm, Kevin Roche and John Dinkeloo Associates, the 2 million-square-foot complex at its peak hummed with the activity of nearly 6,000 employees. 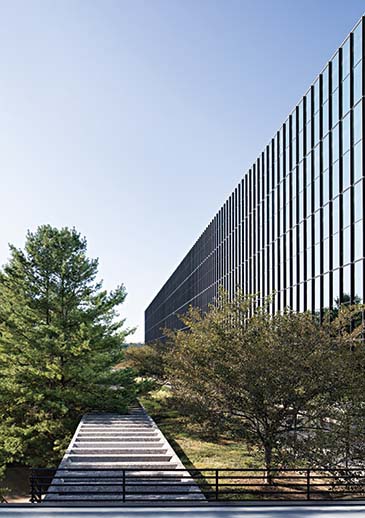 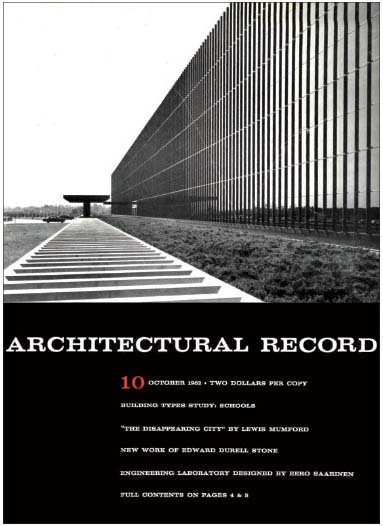 The building appeared on the cover of RECORD soon after the first phase opened in 1962.

But the scientific ferment wound down well before the AT&T spinoff, Lucent Technologies, put the building on the market in 2005. Zoned for a single tenant and too large to appeal to most corporations seeking a suburban location, it was threatened with demolition. Then Somerset Development bought the building in 2013 for $27 million after convincing the town to allow multiple tenants. Now renamed Bell Works, and renovated according to a master plan by New York–based Alexander Gorlin Architects, it has been transformed into a mixed-use facility that ­Somer­­­set president Ralph Zucker calls a “metroburb”—a term he coined. It is a city in microcosm, he says, containing all the elements of a thriving downtown, from workplaces and retail space to art and culture, but in suburbia.

The transformation was made economically viable by selling some of the original site’s outlying property for a subdivision of neocolonial houses arrayed around cul-de-sacs. But despite the unfortunate architectural disconnect, Zucker’s metroburb idea seems to have legs. Bell Works is now 90 percent leased, with office tenants such as software developers, law firms, and investment com­panies as well as shops, several eateries, a yoga studio, a hair salon, and a branch of the county library. The project benefited from historic-preservation tax credits, because the building and primary portion of the site and its landscape earned national landmark status, in 2017.

Saarinen, who died in 1961 before the building was finished, conceived the research facility as four discrete but conjoined laboratory blocks within its then-novel reflective enclosure. He arranged the concrete-framed structures so that they define an immense five-story-tall cross-shaped skylit atrium spanned by bridges and wrapped with cantilevered walkways. He also placed circulation routes at the building’s perimeter, where they separate the laboratory boxes and the mirrored skin, through which users could look at the landscape. The expansion by Roche and Dinkeloo (who had worked for Saarinen) extended the ensemble by relying on the same DNA, adding four more blocks, this time framed in steel—two at each end of the atrium’s main axis.

The resulting central space is impressive for its architectural expression and its scale, achieving what Gorlin terms a “rectilinear grandeur.” Including the 1980s additions, the atrium’s main axis, punctuated with a pair of stalwart concrete vertical circulation cores, is more than 1,000 feet long. Gorlin points out that the atrium’s 100-foot width comes with a strong legacy of awe-inspiring spaces. It can be found in the nave of St. Peter’s Basilica, the central barrel-vaulted portion of Paxton’s Crystal Palace, and the courtyard of a roughly contemporaneous project—Louis Kahn’s Salk Institute for Biological Studies (1963). 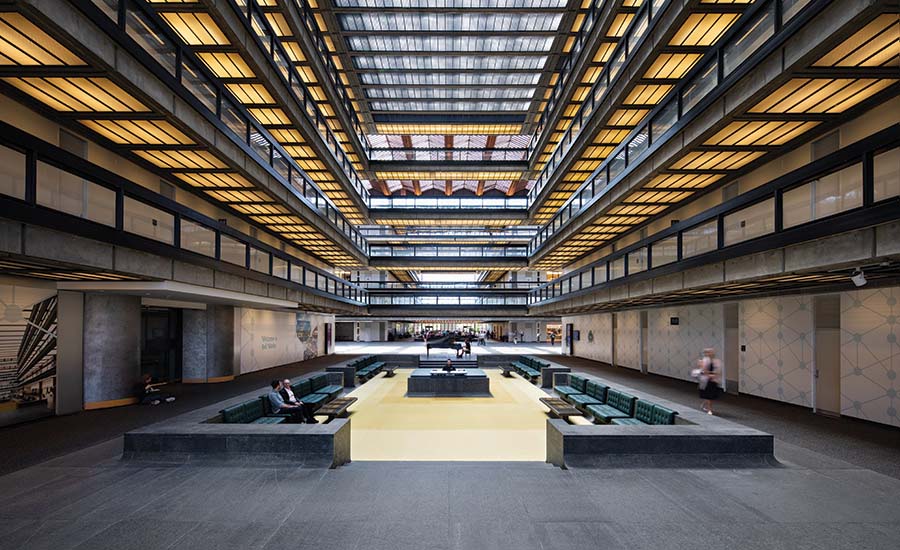 Visitors encounter the five-story atrium immediately upon walking into the lobby. In the sunken reception area, a carpet scheme that replicates the original bears a striking resemblance to a well-known series of Josef Albers paintings. Photo © Eric Petschek

At least while engaged in their work, the Bell scientists were shut off from this spectacular space, which then included elaborate plantings. The individual lab blocks were clad almost entirely in metal panels, making them mostly opaque, and the environment within highly controlled with air-conditioning and electric illumination. Quoted posthumously in the October 1962 issue of RECORD, Saarinen painted a picture of someone emerging from deep concentration in a laboratory and encountering “a sweeping view of the countryside or the formal planting of the winter garden interior court,” predicting that the researcher would “feel ­refreshed by his encounter with nature.”

Since such insular workspaces would probably not appeal to today’s office tenants, Gorlin recommended swapping the majority of the metal panels enclosing the labs for glass. He won approval from the National Park Service, which administers the landmarks program, by arguing that the blocks’ structural grid was their defining element, not the cladding material. And—to give the boxes’ atrium-facing elevations a uniform appearance—the project team created design guidelines for tenants; these include a 3-foot drywall soffit and a lighting cove just behind the atrium-facing glass and specifications for cubicle placement and signage.

Gorlin’s contribution includes two piazza-like areas near the atrium crossing, delineated in various gray tones of porcelain floor tile and based on Josef Albers’s works on etched glass from the 1920s. Vaguely resembling overlapping and layered columns and beams and the shadows they might make, the compositions serve to anchor the vast space, which hosts events such as holiday parties and a farmers and craft market. Varying shades of yellow carpeting in a sunken reception area replicates what had originally been there and bears a striking resemblance to the artist’s Homage to the Square series. 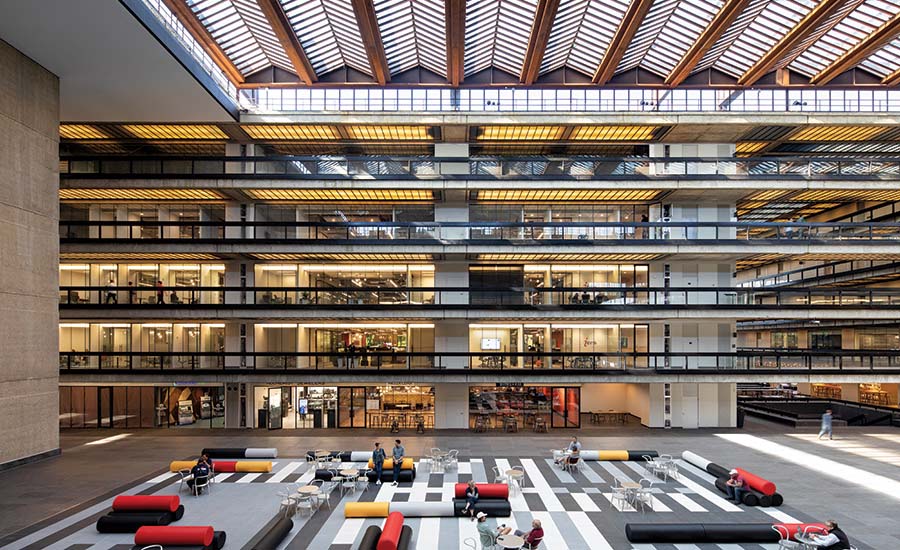 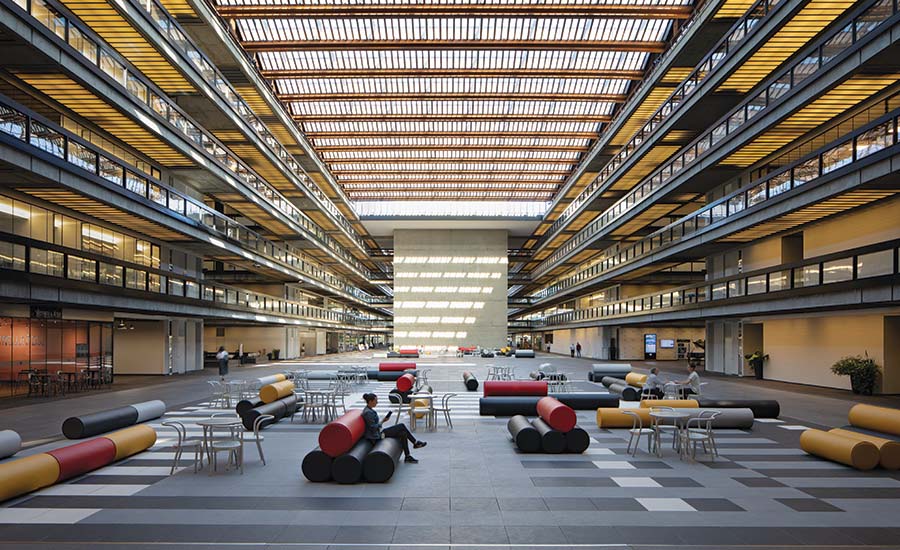 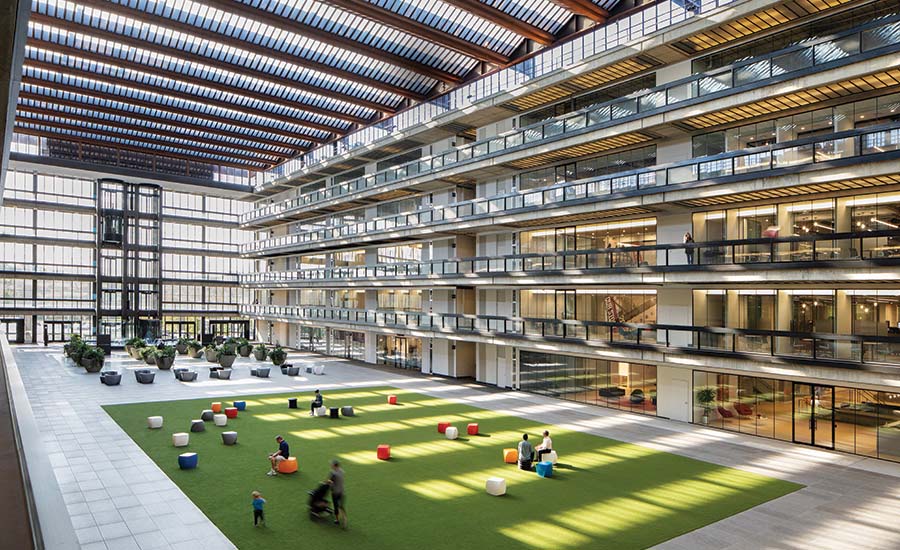 Within the vast balconied atrium, piazza-like areas have been created with different floor treatments, including ceramic tile in gray tones and artificial turf. The covering of the skylight is photovoltaic glass. Photos © Eric Petschek

Some of the most critical modifications are practically invisible. The original HVAC infrastructure for the labs included a dual-duct variable air volume (VAV) system enclosed in vertical shafts that divided the floors into several long and skinny bays. This has been replaced with a variable refrigerant flow (VRF) system coupled with a dedicated outdoor air system (DOAS) and energy recovery. Not only is the new infrastructure more efficient, but it provides occupants with more control, and it allowed the opening up of the previously compartmentalized floor plates, maximizing rentable square feet. It also meant the client could build the system in phases, as spaces were leased, explains Eric Collins, a division manager at Becht Engineering, the firm that developed the conceptual mechanical design for the renovation.

The atrium infrastructure was also updated to comply with current smoke-evacuation requirements. It now has a DOAS for ventilation and fan coils for space conditioning, while 28 exhaust fans in the upper reaches of the atrium can vent the smoke from the voluminous space. Such a setup would normally include facade louvers for drawing in fresh air. But at Bell Works, because the mirrored skin was considered essential to the landmark status, engineers modified the building’s 42 entry doors so that they open in the event of a fire to supply so-called “makeup” air. 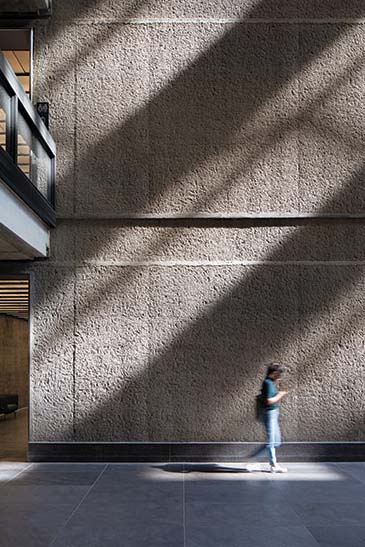 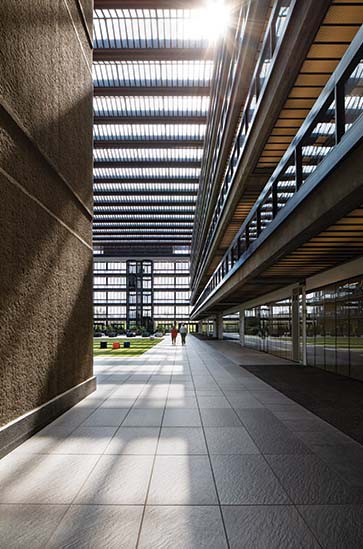 Unlike the facade glazing, the glass of the skylight was not considered critical to the building’s landmark status. Relying on the original weathering-steel structure and framing, its 3,200 panes have been replaced with clear silicon-film photovoltaics (PVs) sandwiched between safety glass. The PVs are invisible but generate 60 megawatt hours of electricity annually, which offsets about 25 percent of the energy consumed by the lighting in the building’s common areas. Zucker plans a 170-room hotel on the roof, surrounding the skylight, using prefabricated pods. The scheme already has town planning-board and National Park Service approval. It would complement the conference facilities on the building’s concourse level, provide accommodations for out-of-towners visiting Bell Works office tenants, and supply the retail establishments with additional customers.

The developer is in the process of expanding to the Chicago area, where, with Gorlin’s help, he is transforming a 1990s-era former AT&T campus in Hoffman Estates, Illinois. It remains to be seen if the metroburb formula can be successfully exported to other markets. But it offers an intriguing model for repurposing America’s many vacant office parks—some of which have thrilling architecture—while bringing a bit of the city to suburbia. 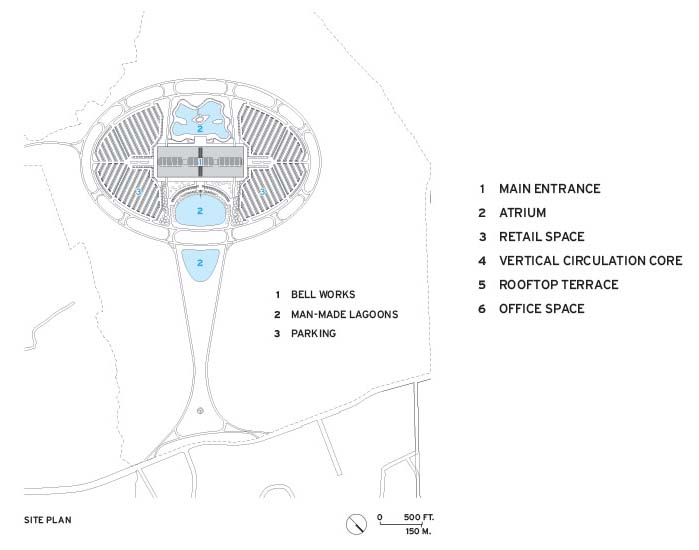 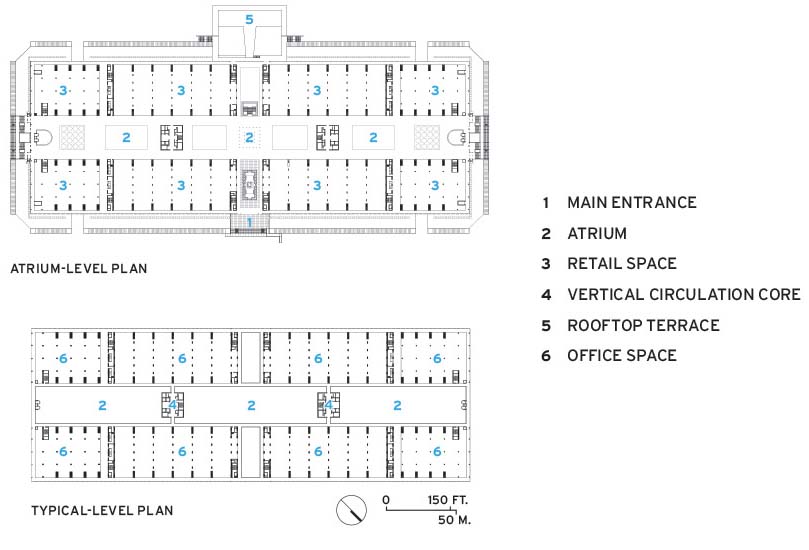