“Everyone should live in a dignified house,” says architect Alexander Gorlin. The challenge, he explains, is that developers of affordable and supportive housing don’t always emphasize design as a criterion. But Joan Beck, director of housing and development at New Destiny Housing, a New York nonprofit, was looking for more than just an adequate apartment block when she asked the Manhattan-based Gorlin to create a building in the South Bronx that would serve as a permanent address for survivors of domestic violence leaving the shelter system and other low-income families. She wanted him to imbue it with a sense of home. Completed last year, the brick-clad nine-story multifamily residence, punctuated by pastel-hued window grills inspired by Andy Warhol’s Flowers, is an uplifting addition to a neighborhood once considered a poster child for urban blight. 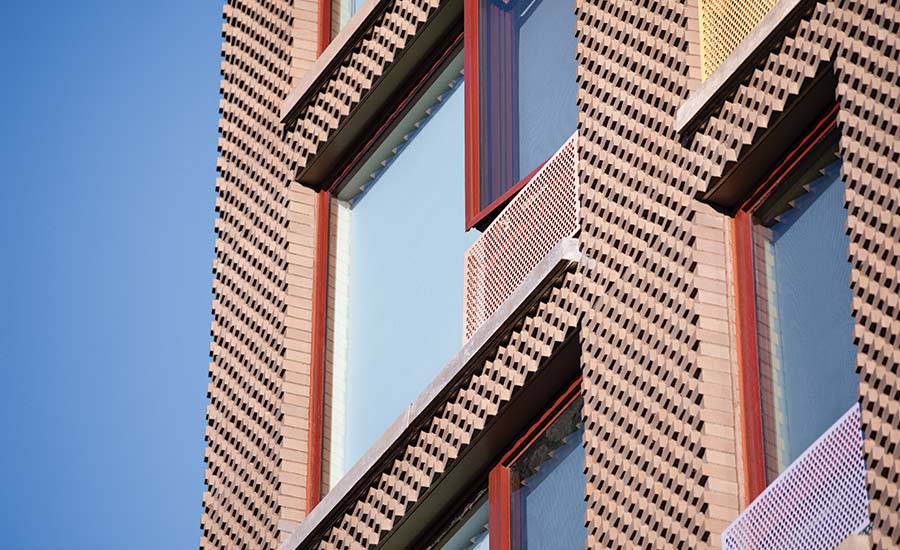 The mid-block property faces a tight three-way intersection at the apex of a street that President Jimmy Carter visited 43 years ago to view an area devastated by disinvestment, arson, and neglect—with subsequent tours by presidents Reagan and Clinton in the 1980s and ’90s to survey its gradual reconstruction. Gorlin had been there too, in 1978, when, as a Yale graduate student, he explored ways to “suburbanize” the Bronx in a class taught by Robert A.M. Stern. Given this personal connection, the site’s provenance resonated with him, and he wanted to give the building a strong identity and presence.

Gorlin, whose practice ranges from similar housing and public schools to homes for the wealthy and work such as the reimagining of Eero Saarinen’s Bell Labs, says he enjoys developing economical strategies with big impact for people. Here he employed massing, color, and the judicious use of quality materials to augment the basic block-and-plank structure. First the architect established an L-shaped plan, which maximized the specified number of units and left room for a front garden. This arrangement led to a welcoming building that opens to passersby with a tall, slender tower on the west thrusting toward the street with a protective loggia, and a broad, lower volume stepping back behind the garden. The design team then elevated the facade by cladding insulated CMUs with modular bricks in two gray hues, articulating the tower’s front elevation with an angled, corrugated pattern that reflects the grid of the street with a visible heft. The colorful window grills soften this rigid skin and conceal high-efficiency air conditioners. 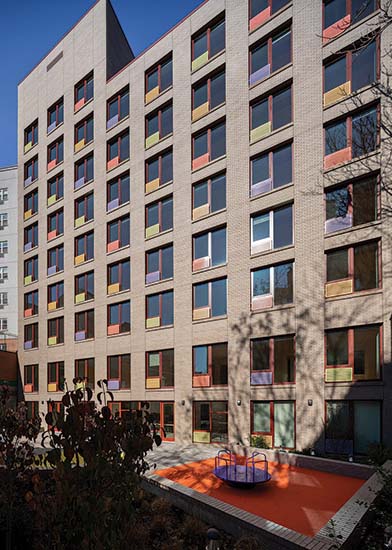 Designed under Enterprise Green standards, the subsidized 54,000-square-foot rental complex has 42 one-, two-, and three-bedroom apartments ranging in size from 550 to 950 square feet. Twenty-three units are reserved for the survivors of domestic abuse, while 19 are for the general low-income population. All are constructed with sustainable materials, energy-efficient systems, and such distinctive components as large windows with integrated shading, radiant-heat panels that sit flush with the ceiling, and air-conditioning enclosures that double as seating and storage. “It is very different from what most people associate with affordable housing,” says New Destiny’s Beck. This is especially apparent in the lobby, she adds—a daylit space with oak-veneer walls, a porcelain-tile floor, and a fragmented ceiling interrupted by strips of warm LED lighting. The LEDs continue alongside a prominent concrete stair, intended to encourage physical activity. Another gracious feature in this common space is an expansive window flanked by accessible mailboxes and a glazed laundry room, which looks out to a second garden and play yard behind the building. 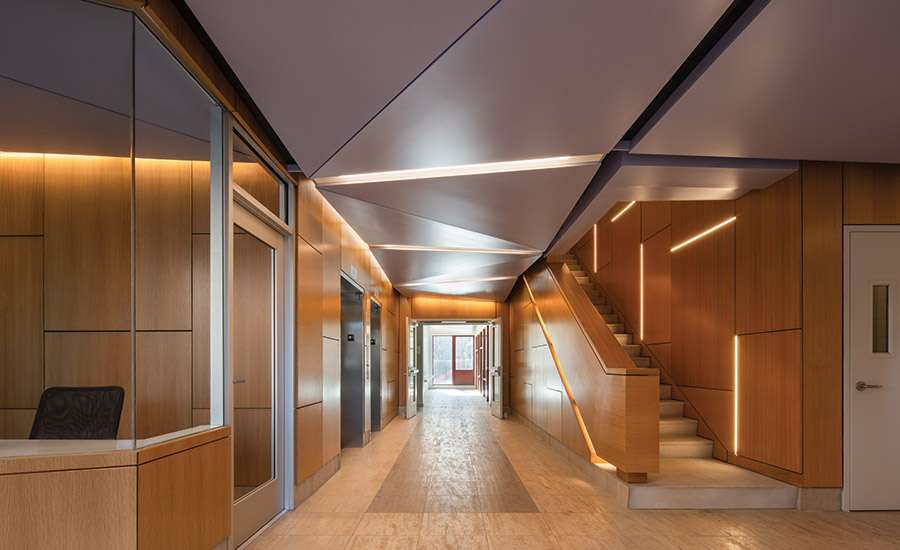 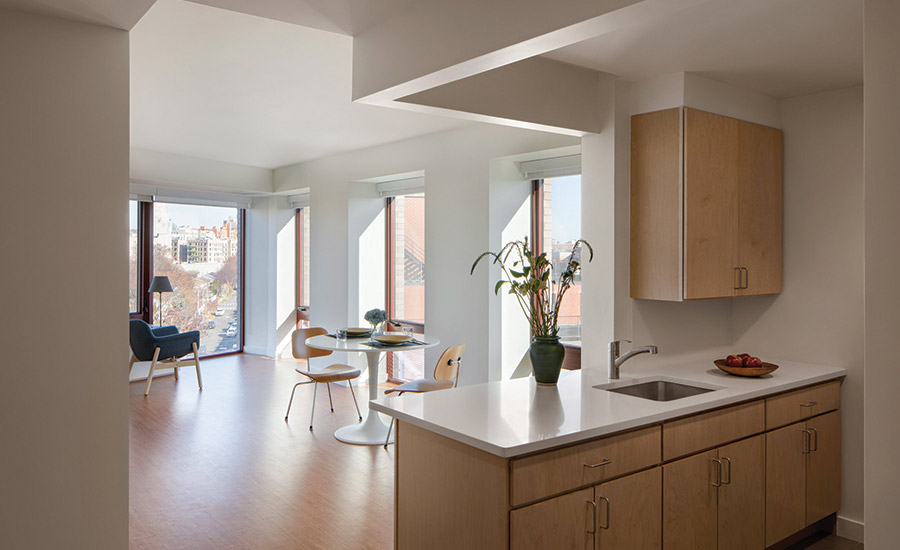 This rear outdoor area borders the basement, a surprising space with 9-foot-high ceilings, tall windows, and glass doors. Making the most of an existing slope, the crew excavated to level the back of the site for the required play yard, resulting in the daylit lower floor that houses multipurpose and computer rooms for residents, plus offices for New Destiny’s social services. The nonprofit not only builds and maintains its projects, it provides on-site counseling to assist tenants so they remain housed, safe, and on the road to economic independence.

Located on one of the last plots of land where a rubble-strewn urbanscape has been transformed into a bustling community, the project overlooks one of the earliest redevelopments here—a tree-lined cluster of subsidized suburban-style houses built in the 1980s to enable homeownership. “The setting is so family-friendly and pretty,” says Beck. “I was lucky to find this site.” Her satisfaction extends to the collaboration with Gorlin. “We asked him for a sense of home, and we got it.”