In addressing the gnarly question of how to add onto a building in a cemetery that is a historic landmark, architects William Rawn Associates of Boston came up with a well-known modernist, but still timeless, answer: glass. Bigelow Chapel, an early 19th-century Gothic Revival structure in Mount Auburn Cemetery, on the edge of Cam­bridge, Massachusetts, needed an extension to accommodate memorial services, weddings, receptions, meetings, and a crematory. But because it is perched on a small plot on the top of a hill overlooking the 175-acre landscaped garden and burial grounds, created in 1831, any new construction threatened to obscure its picturesque architecture, which is distinguished by its stolid Quincy-granite walls and minaret-like spires.

The original 6,300-square-foot building, realized in 1846, was designed by Dr. Jacob Bigelow, a physician and botanist and Harvard professor who was one of the founders of Mount Auburn (although the architectural drawings were executed by a local practitioner). Its 12-foot-diameter stained-glass rose window above the south-facing entrance and its simple groin-vaulted interior awed visitors attending services throughout the decades. But by 2016, it was clear that the chapel, which seats 75 people, could use more space, as well as benefit from upgraded acoustics, accessibility, and lighting, not to mention the construction of a more energy-efficient crematory. 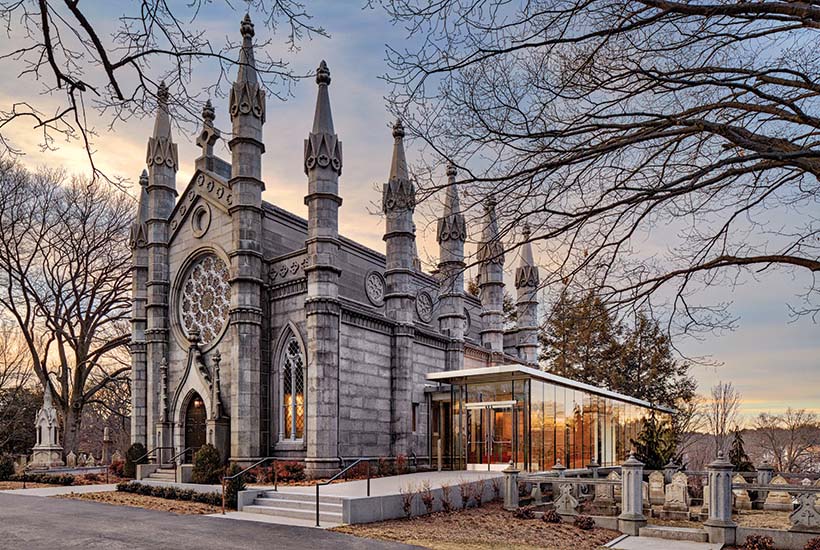 Bigelow Chapel now has a new public entrance through a glazed pavilion on the east. Photo © Robert Benson, click to enlarge.

Since Rawn Associates had been preparing a master plan for the cemetery, the firm’s principal for design, Samuel Lasky, suggested going after the commission for revitalizing the chapel. The solution is a new square-U-shaped addition that wraps around the east, north, and west ends of the chapel. Its most visible portion is a one-story butt-jointed steel-framed glass pavilion jutting out into the pastoral landscape above a blue­schist foundation wall. The low-iron glass emphasizes the sense of transparency, while a skylight separating the addition from the chapel’s stone wall illuminates the pavilion’s new east entrance and accessibility ramp.

Most striking for visitors to the new extension, with its beech floor and stainless-steel lally columns, is the extraordinary panorama it affords of the surrounding gardens, forests, and lawns, marked by monuments and tombstones for such notable figures as Henry Wads­worth Longfellow and Buckminster Fuller buried beneath.

On the northwest corner of the 4,100-square-foot expansion, new schist walls enclose the state-of-the-art crematory. While the blue schist’s color is similar to the original gray granite, the architects changed the scale of the stone coursing to help distinguish old from new construction. 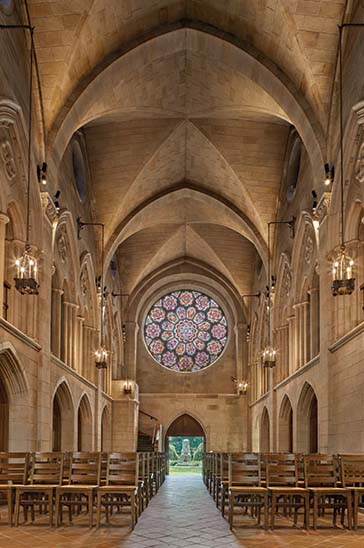 Although visitors enter the east leg of the U, the funeral personnel use a glazed vestibule to the west of the original south entrance (and its newly restored rose window) to reach the crematory. “Separating the public from daily operations is an important advantage of the new scheme,” says Gus Fraser, vice president of preservation and facilities at Mount Auburn.

The crematory is not a new feature of Bigelow: the original was installed in the chapel’s basement in 1899—the first such facility in a cemetery in New England—when Willard Sears, the architect for the Isabella Stewart Gardner Museum in Boston, renovated the chapel. (In 1898, he also designed the cemetery’s larger, 160-seat Joseph Story Chapel, of reddish sandstone, near the entrance.)

While cremations were unusual at the turn of the 20th century, over the years the acceptance of the practice increased, so that today Bigelow’s facility performs 1,200 annually. Since the “retorts,” as the furnaces are called, had not been replaced since the 1970s (when the crematory was moved from the basement to the main floor’s northwest corner), Rawn Associates installed computer-controlled ones that require less natural gas and less time for the process. 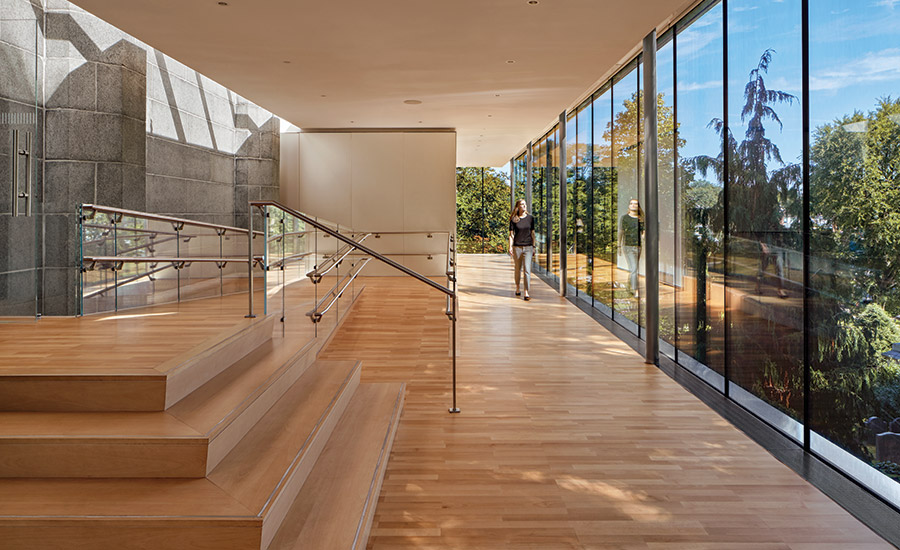 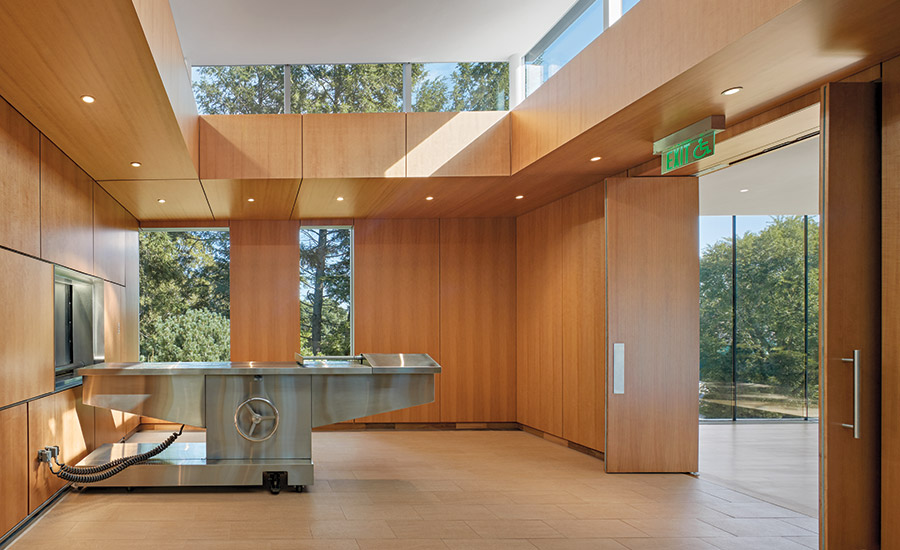 The team also created a viewing room, where family and friends can gather before the coffin—placed on a stainless-steel-tablelike “charger”—is rolled into the stainless-steel-clad furnace that is embedded in an anigré wood–clad wall.

Anigré covers most of the intimately scaled viewing room, where windows provide glimpses of the trees, and a glass wall reveals an interior garden inserted between the chapel’s altar and the viewing room. Clerestory windows admit additional daylight, resulting in a luminously calm space.

“Mount Auburn has always been forward-thinking,” Lasky notes, referring to its significance as the first parklike cemetery created in the U.S. and one at the forefront of dignified venues for cremations. “It was important for us to convey this vitality with a highly contemporary design, while not covering up the older structure or dominating the landscape,” he adds. And the architects succeeded: the recent renovation and expansion underscore the progressiveness of Mount Auburn’s mission with suitable elegance, grace, and aplomb.