Opened in 1965, the Carnegie Main Library building, later known as the Ben West Library, was a rare Midcentury Modern gem in downtown Nashville. It fell into disuse by the turn of the 21st century when, in 2001, a much larger Neoclassical structure, designed by Robert A. M. Stern Architects and located a couple of blocks away, replaced it. Mainly abandoned since then, apart from a brief period when it housed the mayor’s offices and city council members’, the former library, unlike other buildings of its era in the city, narrowly escaped the wrecking ball. A landmark designation in 2015 saved the 42,000-square-foot modernist marble pile—for which its architect, Bruce Crabtree of the once-prominent local firm Taylor & Crabtree, had held particular affection. But a cumbersome ownership arrangement of the ¾-acre property, involving both the city and private entities, as well as its new historic status—which scared away developers but attracted creative enterprises and nonprofits that couldn’t afford it—complicated its sale for years.

In an ironic turn of events, Hastings Architecture, which had advised a potential buyer early on, ended up purchasing the building in 2017 for $4 million. “At one point, we were looking at it and I laughed, ‘This would be a great building for us,’ ” recalls Dave Powell, who, along with his partners David Bailey and William Hastings, made the surprising decision to move their design firm (now 85 people) into the rescued real estate, which is set among several government buildings, including the SOM-designed Tennessee Tower (1970) across the street. 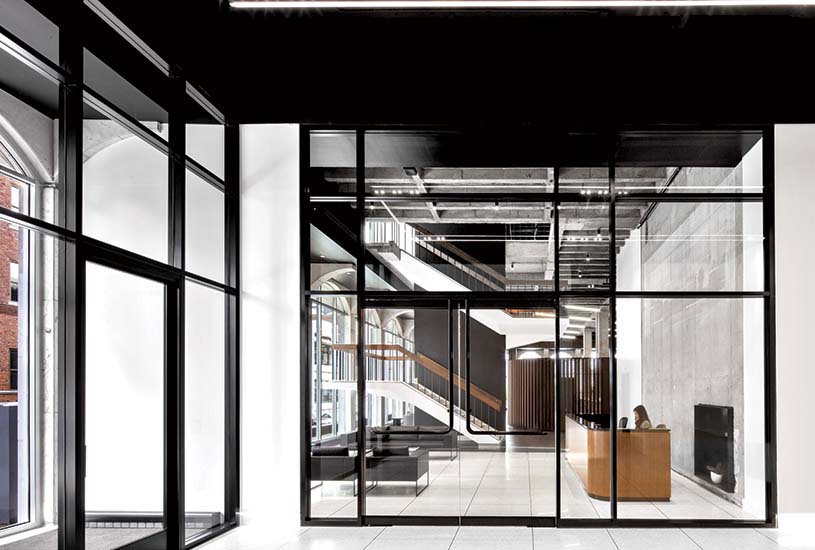 Since 2003, Hastings had maintained its office in an 1895 warehouse near the Country Music Hall of Fame, an area that has developed into a boisterous entertainment district. In recent years—coinciding with Nashville’s construction boom—the rapidly growing firm could no longer comfortably fit in that space, and was happy to leave the traffic and noise behind.

As architects who had previously renovated older buildings, including Nashville’s storied Ryman Auditorium, the partners knew to expect some surprises with the restoration, but even they did not anticipate how big and long a project—construction lasted 14 months and cost $11 million—this would turn out to be. The city had already remediated the structure for hazardous materials during its temporary tenancy from 2007 to 2008, but not much else had been done to the building in more than 50 years. The architects had to replace a greater number of the ½-inch-thick Cherokee white marble curtain wall panels than they had foreseen—up to 75 percent on the pilasters and 30 percent overall. “We started to notice a lot of bowing,” says Bailey. Previously load-bearing, the new panels, from the same quarry in Georgia as the originals, now are ¾ inches thick and supported by stainless-steel clips. Panels that were not replaced, as well as the original terrazzo floors, were cleaned and repaired. 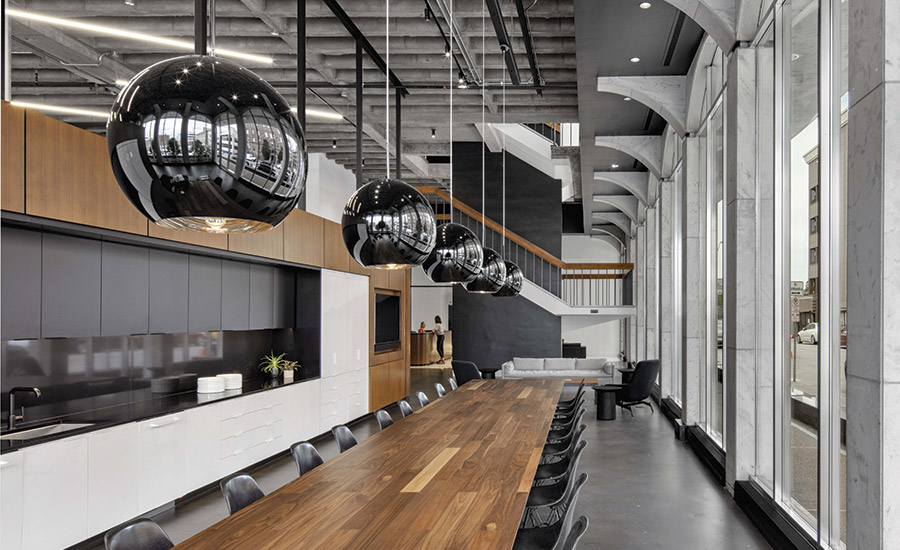 The staff dining area, which includes a custom 30-foot-long wood table, is situated by the windows along Polk Avenue and is visible to passersby. At one end of the café-like space is the main staircase, which was an original feature of the library. Photo © Eric Laignel

The building’s most notable feature, a series of full-height arching windows that wrap the main level, also needed to be replaced. The openings along the south facade originally contained precast concrete infill panels to obscure a nightclub across the parking lot from view of library visitors. The landmarks committee was not initially onboard to have Hastings substitute those infill panels with glass. “We eventually found a clever detail on the original drawings that allowed for doing just that in the future,” says Powell, which convinced the committee that it was fulfilling the vision of the original architect, who died in 2014, before the landmark designation. Both the main level and top floor above it now feature double-glazed high-performance insulated glass. Below them—what Hastings refers to as “the dungeon”—are parking, mechanical and electrical equipment, archives, and a future model shop.

In renovating the interior, the architects gutted the entire building and removed plaster that had been applied to the concrete. “We stripped it to the bones and only put back what was necessary,” says Powell. They reconfigured the floor plan to open up the core and create: a gallery-like central lobby that leads to the firm’s office, which occupies the southern half of the building; a 1,500-square-foot community room, called the Athenaeum, that is often used by government agencies as part of the purchase agreement; and two tenant spaces—another, smaller architecture studio on the top floor, and a large talent agency on the north side that is in the process of moving in. 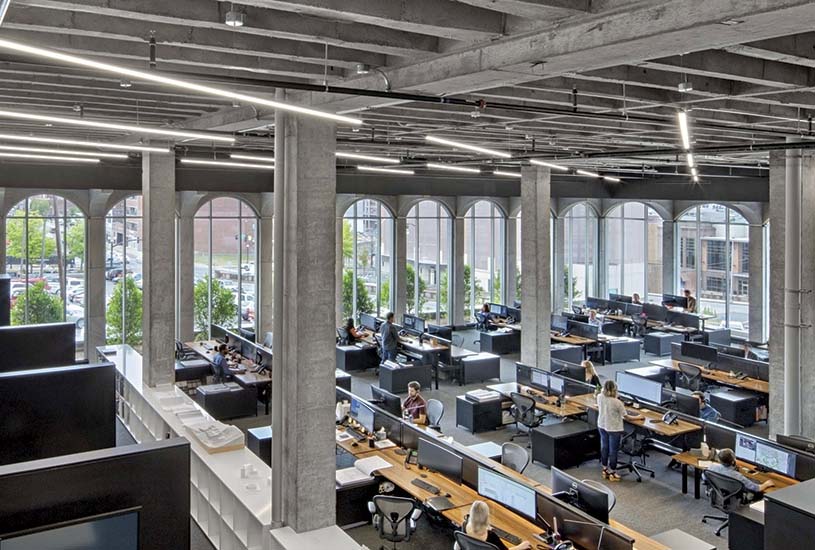 The open studio on the main level is a 20-foot-high daylit space with carpeted floors. 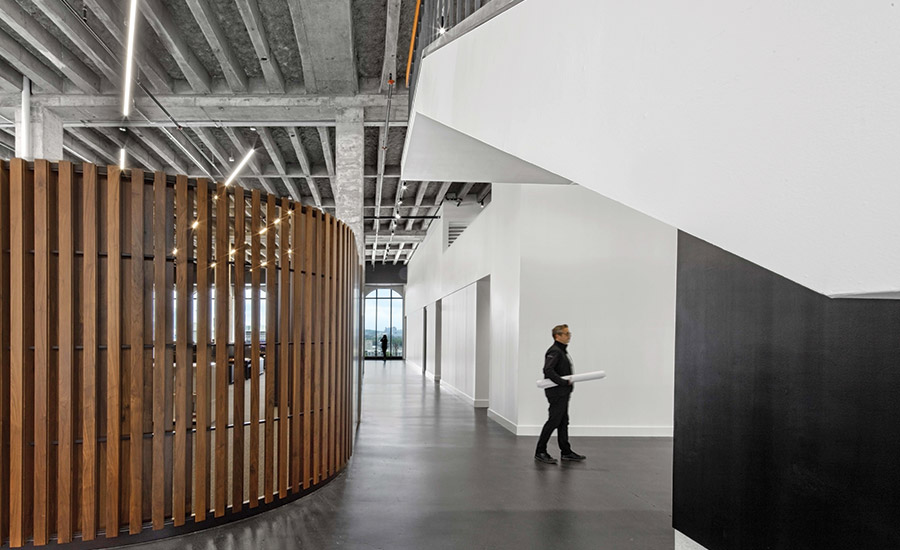 A curving wall features walnut salvaged from an auditorium in the original library.

The 20-foot-high, daylight-filled main level is now a soaring studio space, its ceiling exposed and streaked with long LED tubes, diagonally positioned to mimic the arrangement of the original book stacks. More studio space, meeting rooms, a material library, a virtual-reality room, and private offices for Hastings are located upstairs on the top level, where occupants can escape outside to a balcony encircling the building.

Both levels offer panoramic views over Nashville, since the building sits on a hill. But what’s most noticeable in the cityscape these days are the construction cranes. Within just feet of Hastings’s new home are future buildings for Amazon and Nashville tech giant Asurion. Those developments will no doubt transform the area, a change that the partners at Hastings—having already disrupted the existing fabric of the stodgy neighborhood by introducing creative offices—welcome. And while Hastings may be an agent of change in this part of town, it became so by preserving its past. 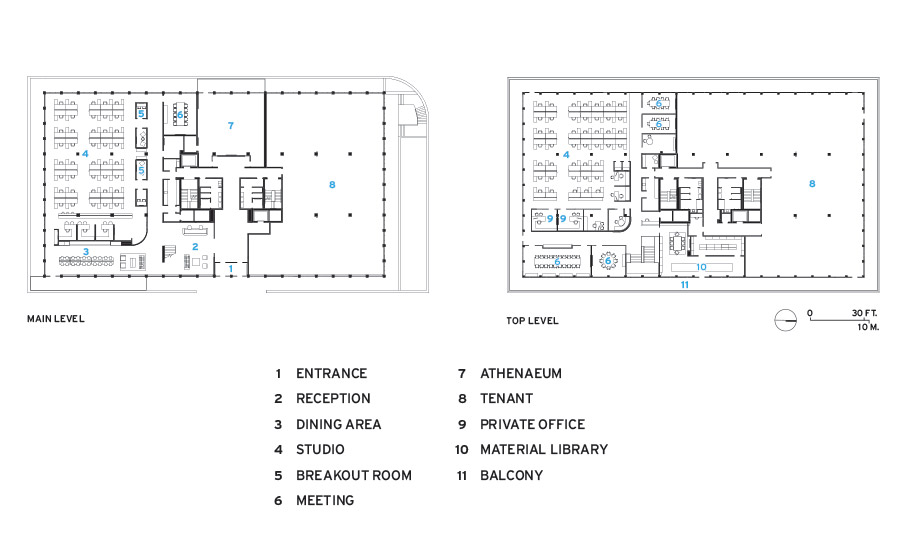