When a young Manhattan couple learned they were expecting their first child, they set their sights on Brooklyn’s Greenpoint neighborhood to settle in. They commissioned local firm STUDIOSC to combine two adjacent units—one a duplex—in a condominium near the East River. Merging the apartments allowed the architects to create “wings”: a private family zone on the top level and a public-facing one, anchored by the kitchen and living area, on the bottom.

To achieve this programmatically, the architects removed the existing kitchen in the standard unit, transforming it into a den, and then gutted the duplex’s lower-level kitchen to “craft something more solid,” says firm principal Stephen Conte. “The goal was to create a very minimal but warm environment that would also be a little contextual, given the space’s double-height window with views to the river.” Conte says that the biggest challenge of executing this vision was smoothing out the numerous bumps and soffits that scarred the walls and ceilings to create a clean canvas: “The push and pull of leveling out the surfaces—sometimes inches, sometimes feet—really drove a lot of our thinking and strategy.”

The architects kept the layout of the kitchen—which opens to the voluminous living space—and focused on details and materials that would give it a more substantial yet subdued presence. “It wasn’t a bad kitchen,” he says, “but the standard fixtures and built-ins didn’t reflect the clients’ personality.” Solid oak for the millwork and curved vertical handles balance any hard edges, and white marble for the backsplash and island countertop lend gravity while remaining visually light. 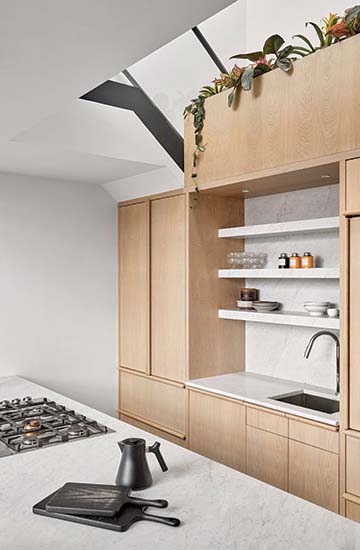 Planters incorporated into the millwork allow for a pop of color and texture. Photo © Garrett Rowland, click to enlarge.

Beyond materiality, the architects finessed some dramatic moments, such as the island’s cantilevered countertop. “The clients were drawn to the idea of having a thin, floating marble slab,” he says. “It was this type of subtle move they were looking for.” Taking advantage of the abundant natural light, STUDIOSC incorporated planters in the millwork atop the cabinetry. The resulting touch of greenery, which can be viewed from both above and below, transforms an otherwise empty surface into a vibrant focal point.

The kitchen sets the tone for the rest of the space. Oak ties everything together: a recessed wall, clad in wood slats, forms an alcove for the couch and marks the transition from kitchen to living room. This arrangement opens up a dialogue between the two spaces, converting a cookie-cutter developer kitchen into a generative design element for a growing young family. 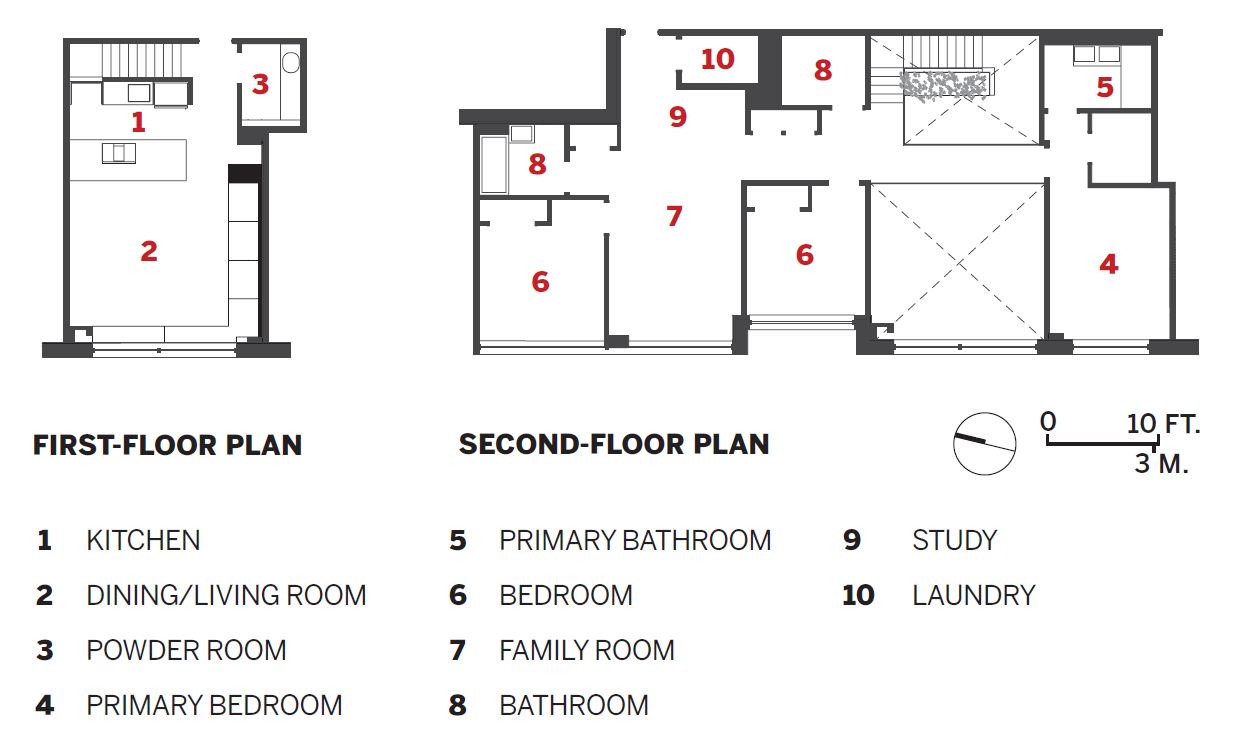