Rem to the Rescue: Review of 'Countryside, The Future'

As Rem Koolhaas explains in the introduction to this exhibition, over the last 20 years he had noticed changes in a Swiss village he often visited. In a “Rem” van Winkle mode he seemed to awaken finally to find his pastoral retreat despoiled: First it was finding  a bad  post-modern addition to a beloved old barn. Then it was the discovery of a charming 1909 photograph of Russian peasant farmers along with another of the alienating, red-lit space of a contemporary Dutch greenhouse growing tomatoes. He wonders “What happened?”

Highly energized, Rem summons trusty students at the Harvard Graduate School of Design; the Central Academy of Fine Arts, Beijing; Wageningen University, Netherlands; and the University of Nairobi. Working with lots of live ammo from AMO (the research group of his Office for Metropolitan Architecture), his posse takes off to four continents; north, south, east, and west, to study ways to save Mother Earth.

The result is a torrent of words, images, and artifacts—including farmer Barbie dolls—unspooled along the great Guggenheim ramp on the walls, floors and ceilings. Don’t expect any conclusions or answers, since Rem and team struggled mightily, Laocoon-like with the material, ultimately drowning in the writhing serpents of data. In a time when statistics indicate that most people occupy cities, Koolhaas seeks “to construct a composite picture of the current condition of ‘countryside’—a glaringly inadequate term for all the territory that is not urban.”

This hot mess of a show is at once provocative, fascinating, enraging, disturbing, barely hopeful, and contradictory. Signage is inscribed on both the ribbon-like parapets and walls of Frank Lloyd Wright’s rotunda evoking Jenny Holzer’s digital art or a Bloomberg financial display. But for a show that presents itself as research and reportage, it has curious lacunae in its historical perspective and contemporary context. For example, global warming is dealt peripherally with examples such as the melting Siberian permafrost. But is not given its own section, even though it is the single most important issue confronting the “countryside” now and in the future.

The exhibition starts off auspiciously enough with a discussion of two ancient concepts of the countryside, the Roman otium or leisure, and a similar idea in China of xiaoyao. Then in rapid succession, we skip to Marie Antoinette’s notorious hameau, where she could pretend to be a shepherdess, and on to 1960s hippies, then to the current boom in the wellness industry. 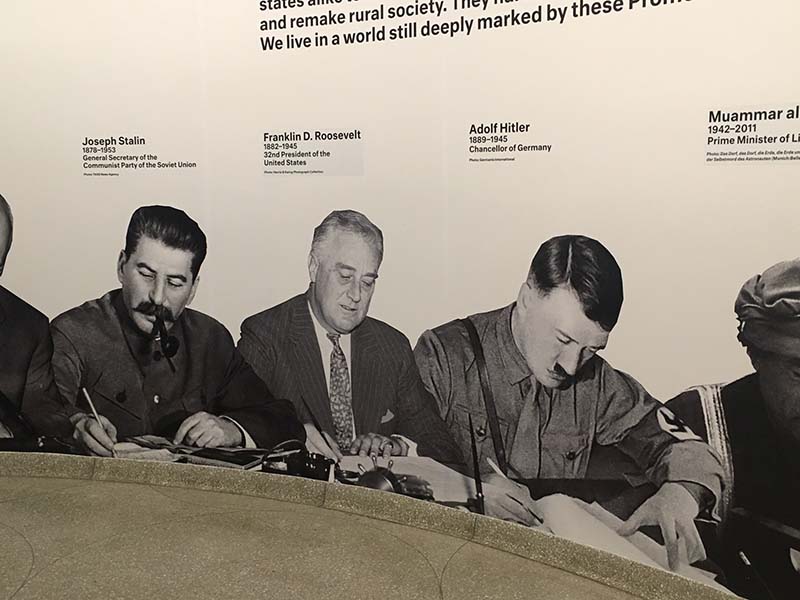 All hell breaks loose in the political section.  Here we are confronted by a newly constructed photoshopped collage on a curving wall of “the future of the world prepared in smoke-filled rooms by mostly white men…” Sitting at a desk between Hitler and Stalin is Franklin D. Roosevelt—implying some sort of a collaboration or affinity. Then we are treated to the 19th-century thinker Charles Fourier and his Phalanstery as a utopian community in the countryside. Along come the grand projets of the twentieth century: the most fascinating of which is Atlantropa, a German engineer’s idea to dam the straits of Gibraltar, draining the Mediterranean to connect Europe with Africa and irrigate the Sahara.  Needless to say, it got nowhere, but this is the scale of a project Koolhaas admires.

Hitler's autobahn appears as part of his "Blood and Soil" German countryside renewal along with Stalin’s and subsequent Soviet leaders attempts to reverse Siberian rivers to create more farmland. The United States section notes the imposition of the Cartesian grid by Jefferson across the west irrespective of geography or Native American lands. Abraham Lincoln is cast as the villainous author of the 1862 Homestead Act, selling off indigenous lands to white settlers.  On the other hand, Mao Tse -Tung’s “Great Leap Forward” in China, an agricultural revolution and staggering failure that resulted in tens of millions of deaths by starvation, is noted merely as a “harsh modernization campaign.” The “Cultural Revolution” an internal Maoist purge, destroying libraries, closing schools and universities, burning books, killing as many as two million, and ruining the economy, is described by Koolhaas as a “true disruption” as if it were a positive way of describing a new Silicon Valley product. Whoa.

Happy Chinese people propaganda posters are presented uncritically and there is even a rural village council setting installed on the ramp as it were representative of a New England town hall. China comes off quite favorably in Rem’s treatment of the countryside. Perhaps he admires the Chinese system where there is, let’s say, no community involvement to slow down projects.

The African countryside is noted mainly as the beneficiary of Chinese largesse in the presently suspect “Belt and Road” initiative, without mention of the Kenyan artist Michael Soi’s critical “China Loves Africa” series. A curiously large section is devoted to the endangered gorillas of Uganda, the Congo, and their interaction with local villagers as well as tourists. Overheard on the ramp from a young man to his parents, “I learned more about monkeys than architecture at this exhibition.”

At the top of the rotunda, the show peters out. There is no dramatic conclusion worthy of the expected promise that you are going to find ultimately what this show is about. In the last section called “Extreme Experiments,” we have Japanese exercise robots for the elderly, high-tech fish farms, big box computer cloud servers in the Nevada desert, and more greenhouses complete with insecticide-spraying drones. Descartes is invoked in a short film, mainly to confirm that the Dutch grid is the source of all countryside wisdom.

Strange that a great thinker, as Koolhaas has proved to be over the years, has abdicated his role of providing solutions to the problem of the countryside, given the stage prepared by Frank Lloyd Wright. The gigantic model of Broadacre City, Wright’s solution to the same situation, was a futuristic idea from 1932 to disperse the city into the rural parts of the U.S. In fact we are given virtually no modernist background for this display, despite the recent exhibition at MoMA of “Le Corbusier: An Atlas of Modern Landscapes” (2015), curated by Jean-Louis Cohen, or the landscape urbanism movement now advocated by professor Charles Waldheim at Harvard’s Graduate School of Design.

Is Countryside, The Future Rem’s own On the Road, a la Jack Kerouac, recounting his globetrotting adventures? Is it journalistic reportage, or is it a garbled polemic? Or is it simply Rem’s latest enthusiasm that somehow works its way into the extraordinary buildings OMA produces? In any event, as you depart, don’t forget to visit the robust gift shop with “Countryside” themed hats, key chains, tote bags, T-shirts, pencils and cups.