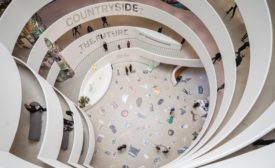 Rem to the Rescue: Review of 'Countryside, The Future' 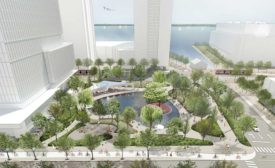 Claude Cormier et Associés, wHY Architecture, and Brook McIlroy have been selected for projects at York Street Park and Rees Street Park, both along the city's waterfront. 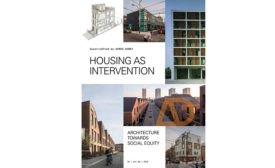 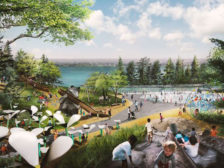 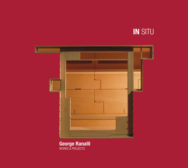 At a time when bookstores are a nostalgic throwback to the past, and Rizzoli, known so well for its architectural monographs, has just published Kim Kardashian West: Selfish, these six serious tomes present a brave face to the future.

Alexander Gorlin, FAIA
No Comments
The controversial restoration of the interiors of a sacrosanct cathedral elicits a call to action. Among modern architects, Chartres Cathedral, largely built in the first half of the 13th century, holds a special place. Philip Johnson famously said, “I would rather sleep in Chartres Cathedral, with the nearest toilet two blocks away, than in a Harvard house with back-to-back bathrooms.” (He first visited Chartres at age 13 with his mother, but the comparison came after he attended Harvard.) Much later, Johnson remarked, “I don't see how anybody can go into the nave of Chartres Cathedral and not burst into tears.”
Read More

Alexander Gorlin, FAIA
No Comments
By Caroline Rob Zaleski. W.W. Norton, 2012, 336 pages, $80. This fascinating book is as much a social history as a documentation of architects working on Long Island during the period of “high Modernism,” when ideology was considered as important as space and form. Organized in chapters devoted to individual architects, rather than in a coherent thematic order, the book includes a surprising number of well-known architects who built on Long Island, such as Ludwig Mies van der Rohe, Antonin Raymond, Frank Lloyd Wright, Richard Neutra, Paul Rudolph, and Marcel Breuer. Disappointing, although not entirely unexpected, is the almost total
Read More

Does size matter when it comes to design offices and quality?

Alexander Gorlin, FAIA
No Comments
Today, it’s different for architects such as Gehry, whose late work has been compared to sculpture and who has been called the Michelangelo of his age. Such comparisons imply that he alone is the final arbiter of each curve and arc. His late work recalls James Stirling’s calling Ronchamp “a masterpiece of a unique and most personal order.” As opposed to Mies’s right-angled vocabulary of construction, which created a school of followers, Gehry’s work even now is untouchable in its hermetic formulas, however open and approachable it is for the public. After the enormous success of the Guggenheim in Bilbao,
Read More

Does size matter when it comes to design offices and quality?

Alexander Gorlin, FAIA
No Comments
Once upon a time, Le Corbusier sat in his single-room office alone, pencil in hand, solemnly pondering an architectural problem, “face to face with himself, the wrestling of Jacob and the Angel within the human soul,” as he explained in volume eight of Oeuvres Complètes. About one project he wrote, “This took a long time to develop, the design worked upon and caressed in days of perfect calm.” His famous dictum was “creation is a patient search.” Each new edition of the Oeuvres Complètes was eagerly anticipated, and although it would come out only every few years with a limited
Read More
Subscription Center
More Videos