The modern, minimal rigor of the Pebble Beach house on Northern California’s coast should be expected in the work of the San Francisco architect Jim Jennings, in practice since 1975. Jennings, known for an elegant precision of line and clarity of planes and volumes in his residential projects, such as his Carmel House and the Visiting Artists House (PDF, page 149), is the consummate architects’ architect: His colleagues admire the age-old principles of proportion, balance of mass and void, and unity of composition in his design. Add to that a contemporary functional ethos and a commitment to new materials and technologies and it is clear why he has gained his solid, albeit quiet, reputation.

Of course, Jennings needs the right clients who share his values and understand the effort that goes into realizing his ideas. Fortunately, he found them, once again, with Stephen and Maryan Ackley. Not only do they collect abstract art and admire modern architecture, but Stephen is a cofounder of a real estate development company, near San Francisco, where Maryan is an accountant. Both are familiar with the ins and outs of residential design and construction. With a full-time residence in the Bay area, the Ackleys had a weekend home for some years in Carmel before deciding to move nearby to Pebble Beach and its striking setting. 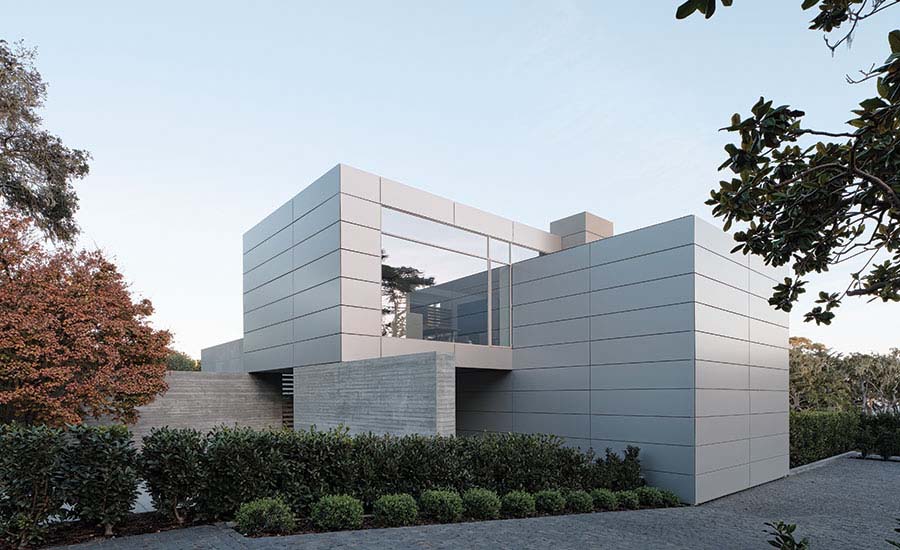 At one end is a parking area and the garage. 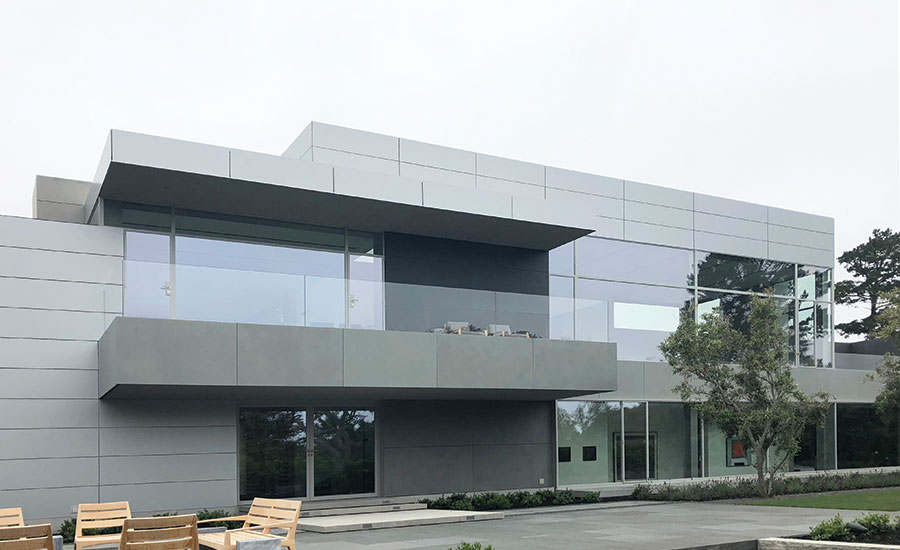 The entrance vestibule also opens to a large terrace on the east.

Like Carmel, the Pebble Beach area is known for its craggy shores, where windswept cypress trees jut up against the sky and deep blue waves crash onto rocks. Yet its verdant hills, and its public and private golf courses, distinguish it from the picturesque village of Carmel, known for its storybook architecture and the lack of traffic lights.

Since the architectural review board of the community of Pebble Beach not only restricts size and height for new construction but votes on the compatibility with the Spanish Mediterranean and California Contemporary styles of its dwellings, Jennings was fortunate: his spare, aluminum-and-stone-clad solution found a persuasive advocate on the review board who convinced some skeptics that it would fit right in.

The garage’s hydraulic bifold doors are clad in aluminum panels (closed and opening) with the upper portion concealing another terrace. Photos © Joe Fletcher

To reduce the mass of a 6,700-square-foot house on its narrow half-acre site, Jennings nestled the three-level, steel-frame structure into the sloping property and submerged the lowest floor (which holds the media room, wine storage, and a guest bedroom) belowground. A perimeter skylight extending along the eastern edge admits daylight into these spaces. Above it, at grade, is a level designated for the master bedroom and bath, along with two smaller bedrooms, all of which have their own outdoor terraces. On top of this floor is the main living level, where the family room and kitchen, plus the dining and living area, open onto terraces facing north, east, and south. 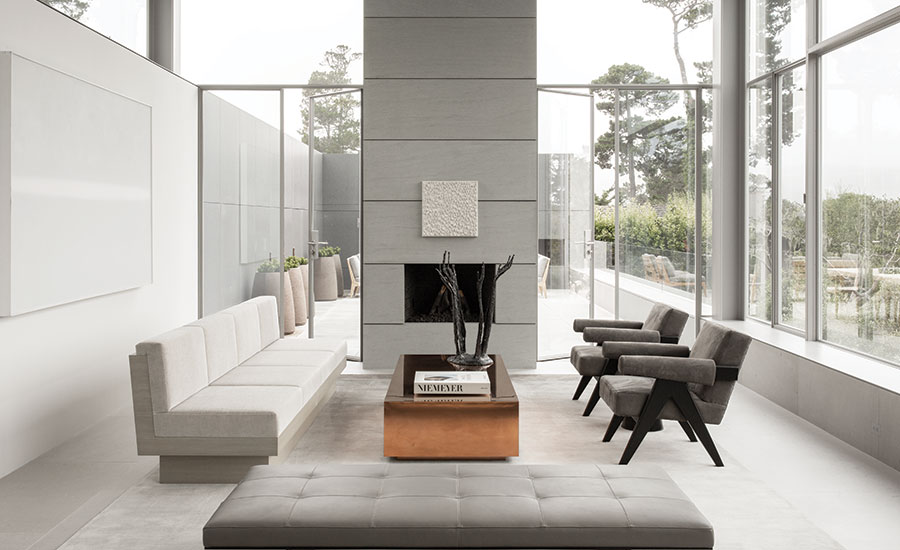 The crisp linearity of the living area on the house’s upper level leads to an outdoor terrace. Photo © Shade Degges

To further break up the massing of the dominant rectangular volume, Jennings pulled out the kitchen and the family room on the upper level at the back of the house. On the ground level underneath, he extended the cross walls of board-formed concrete, partially enclosing the bedroom terraces. On the other side, facing the lawn, Jennings pushed the main level’s terrace out from the strong, horizontal facade—a volumetric expression that recalls Le Corbusier’s garden elevation at the Villa Stein in Garches, France, of 1927. Jennings’s version appears softer, however, owing to the muted gray tones of the aluminum and pietra serena sandstone rainscreen cladding. These panels follow a 24-inch module, whereas the concrete walls at the base, poured in Alaskan yellow cedar boards, each three-inches deep, foster “a delicacy of scale,” in Jennings’s words. 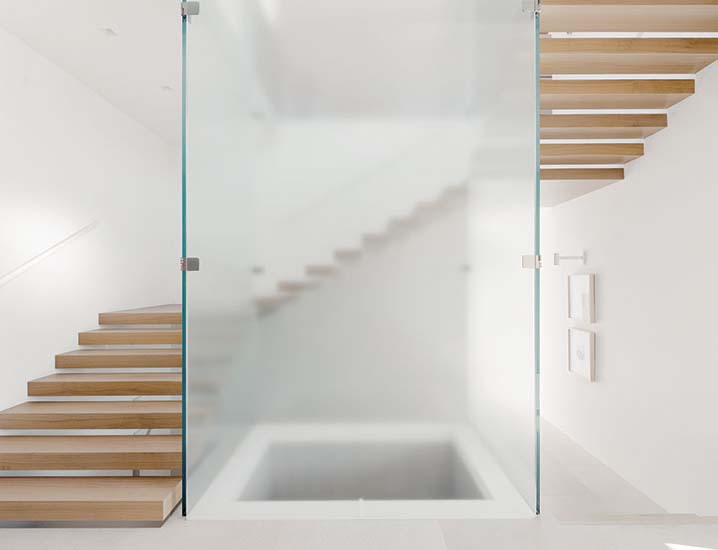 Aside from its formal qualities, the house, of course, needed to be livable. The Ackleys enjoy entertaining and having their grown children visit, so they wanted flexible living spaces that could accommodate (and offer privacy for) varying numbers of guests. Jennings’s multilevel parti addresses such concerns with a variety of indoor and outdoor spaces. To connect the three levels, Jennings placed a central stairwell near the entrance, which is at the south end of the house, easily accessible to the parking area.

The entrance is discreet. You go down some steps from the outdoor parking area, and find yourself in a porte-cochère of sorts, under the main volume of the house. Entering the house into a vestibule, you encounter the central stair where wood treads cantilevered from steel-framed walls wrap around a freestanding glass tower. This central stair Jennings describes as the “the heart of the house.” (A second, smaller stair near the kitchen area leads up to the roof deck.) The tower acts as a light well, a solution found in houses in Minoan Crete (1600 BCE), although this one is glazed at the top and is enclosed by triple-laminated glass panels on four sides that softly illuminate the interior. Constructing the light well was not easy. Because of the translucent panels’ large size (they are 15 feet long and each one weighs about 1,000 pounds), the pinned connectors joining them at the corners needed to be carefully engineered. 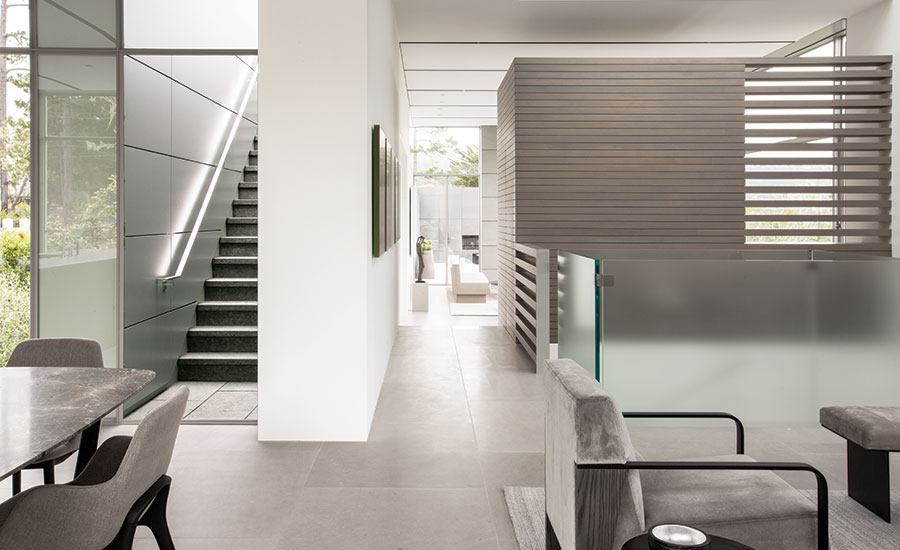 The stair extends from the lower level to the upper living spaces (1), where another smaller stair leads from the kitchen area to the roof. Rift-cut walnut cabinetry separates the dining and living area from the family room (2). Photos © Shade Degges 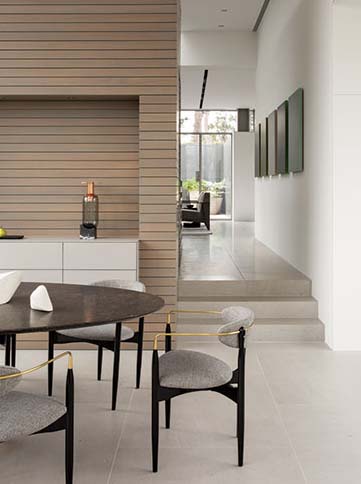 In reaching the main upper level, you feel you are in the trees as you move from kitchen and family room at one end to the living and dining area at the other, with abundant views and access to the terraces. The serenity is palpable. The interiors, executed with Leverone Design, depend on a palette of misty gray and soft taupe, including rift-cut walnut for the cabinets. The simplicity and linearity of the furniture and related objects evokes classic modern prototypes.

Outdoors, the sculptural, abundant planting by Andrea Cochran Landscape Architecture offers a counterpoint to the house’s crisp rectilinearity. Olive trees and Japanese maples are combined with boxwood, hydrangeas, anemones, and iris. The interaction with the landscape is just more evidence that Jennings is a sympathetic collaborator with other design professionals. That fact, as well as the way he combines classical and modernist principles—and executes them with great finesse in the handling of details and materials—is why he has long proved he is an architect’s architect. 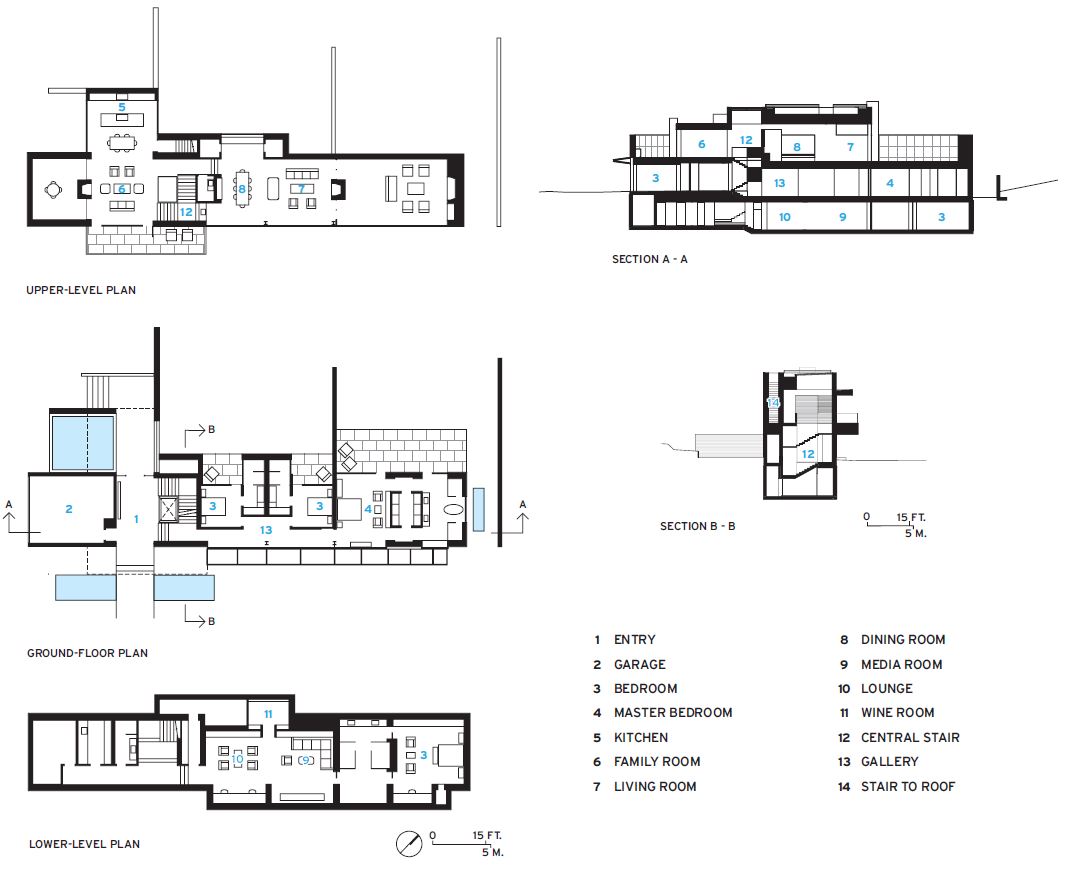