Bar Harbor is the busiest venue on Maine’s idyllic Mount Desert Island, known for its 31,000-acre Acadia National Park and for the island’s history as a summer colony for the Rockefellers, Astors, and Vanderbilts. While the village of Bar Harbor teems in the summer with tourists crowding T-shirt shops and ice cream parlors, calmer enclaves exist outside the village, such as the 38-acre College of the Atlantic (COA) on Frenchman Bay. For this small private undergraduate institution, Susan T. Rodriguez | Architecture • Design of New York collaborated with OPAL Architecture of Belfast, Maine, to create a crisply tailored, sustainable, 28,000-square-foot, two-story classroom building. The polished result, dedicated in September, meets remarkably high standards of sustainability with a design distinction often missing in energy-efficient efforts.

Founded in 1969, the college’s mission, shaped by the era’s counter-cultural values and growing ecological concerns, led to the creation of an interdisciplinary program focusing on the environment and on community service. All students graduate with a B.A. in Human Ecology (except for a few pursuing master’s degrees). Says COA’s president, Darron Collins (class of ’92), “We were a small, scrappy institution, but we have grown over time in size and recognition.” 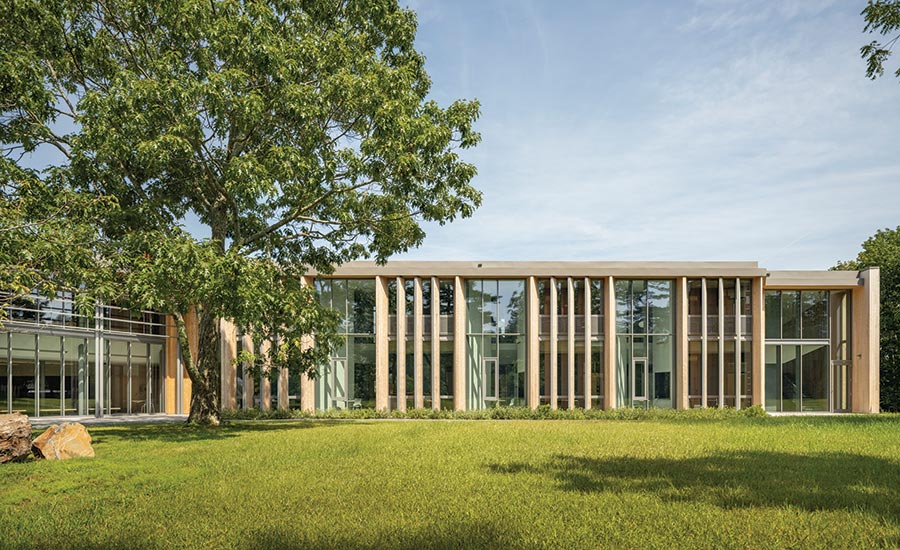 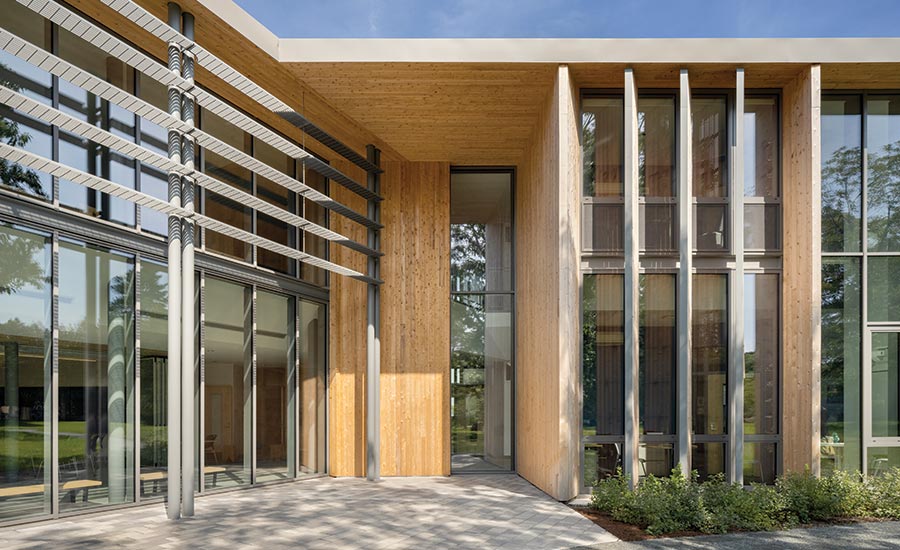 Located on a bluff overlooking the bay, the college began in a cluster of farmhouses, vacation retreats, and a granite French Renaissance–style manse designed by Bruce Price in 1895. A garden by Beatrix Ferrand is next door. And, while the school added other structures over the years (including a rambling barnlike performing-arts center by Turner Brooks in 1993 and an expansive Postmodern shingle-style library and dining hall by Daniel V. Scully in 1988), it needed a new classroom building that would express the sensibility of the school today. 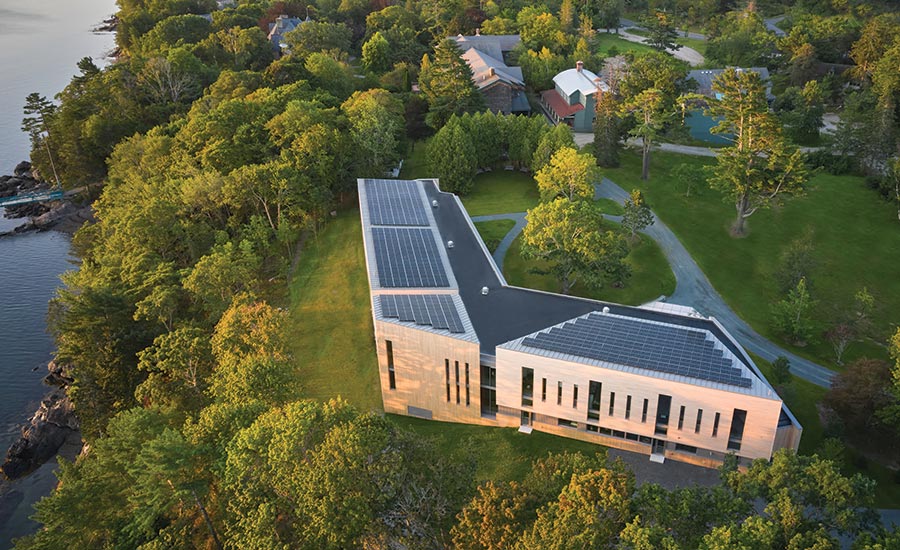 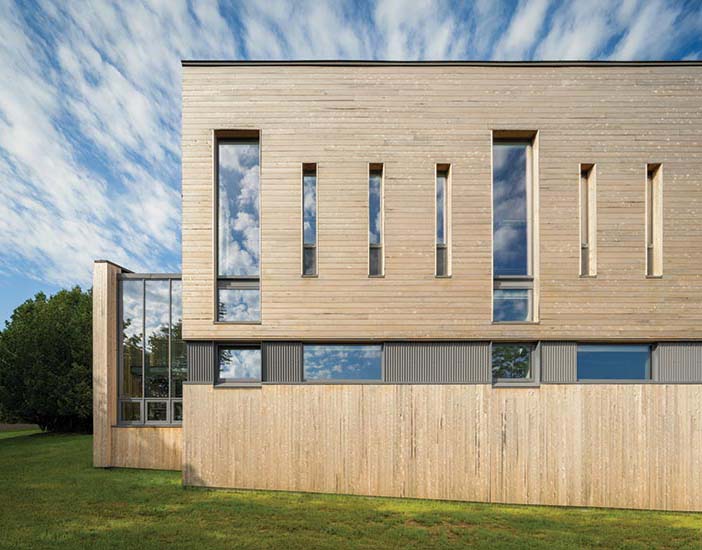 “We didn’t want to just build a box that was sustainable—we wanted design quality,” says Collins, and, to that end, students, faculty, and staff were all involved in the selection of the architect for what is called the Davis Center for Human Ecology. “That meant we had 400 clients,” jokes Susan Rodriguez, who won the commission.

Rodriguez, a longtime summer resident whose off-the-grid cluster of cabins on a nearby island was a Record House (April 1997-PDF), well knows Maine’s obsession with the outdoors. She felt the architecture should “capture the ethos of the place and make a building truly about a grass-roots community.” Sited at the north end of the campus, the two-story L-shaped building, with wings that meet at a 120-degree angle, follows the promontory overlooking the bay. “It’s not an ‘object’ building,” says the architect. “It is more about the memorable experience and generating the framework for that to happen.” On the land-facing side, the L shape encloses a protected space, which is the point of arrival, with a greenhouse next to the entrance and open area where students can gather around a giant oak tree. 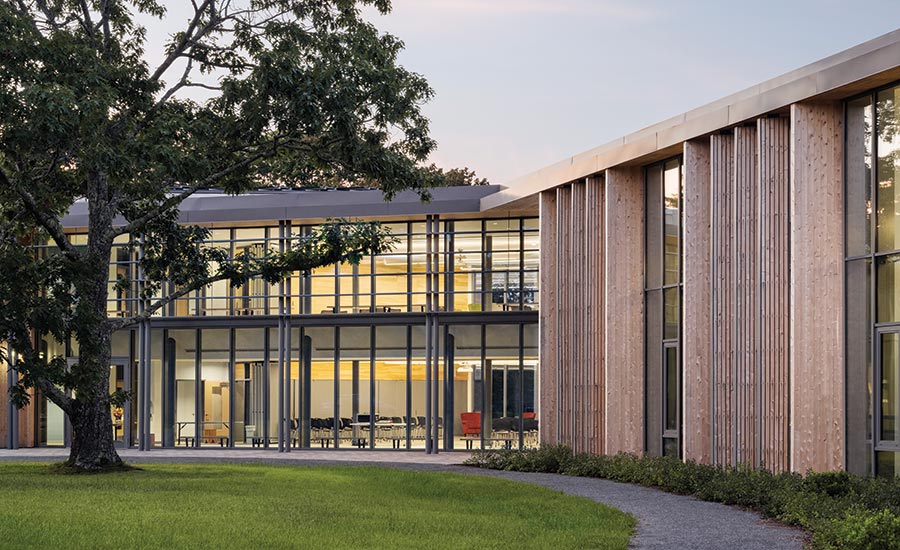 The L-shaped building creates a point of arrival and a protected public space. Photo © Trent Bell

Inside the interdisciplinary Davis Center, both floors are devoted to studios for painting and printmaking, and labs for botany, chemistry, geology, and physics, as well as classrooms, faculty offices, and meeting spaces. Labs and classrooms on the second level have ceilings with a gentle pitch upward, so that the tall windows reveal stunning views of the water and trees. At the juncture of the two arms, wedge-shaped spaces on each floor accommodate lectures.

In one wing, Rodriguez and her team cut through the two floors to create light wells that alternate with faculty offices. On the ground floor, these vertical shafts become alcoves for study; on the second level, they are flanked by narrow bridges that link offices to the main hallway. (On a sunny day, the play of light and shadow generated by this sectional exercise is memorable.) 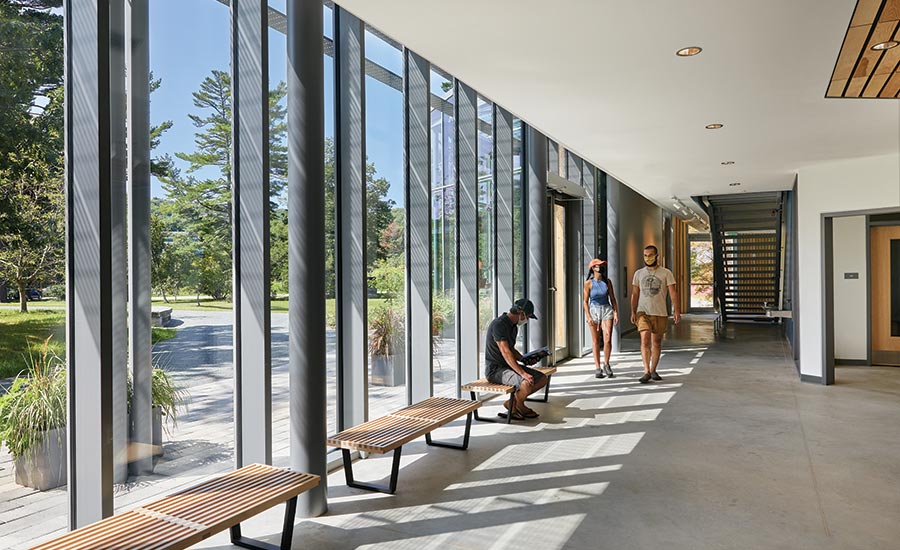 The entrance opens into an expansive hallway (5), which angles around to a wing with vertical spaces used as study alcoves. (6). Photos © Jen Holt (5), Trent Bell (6) 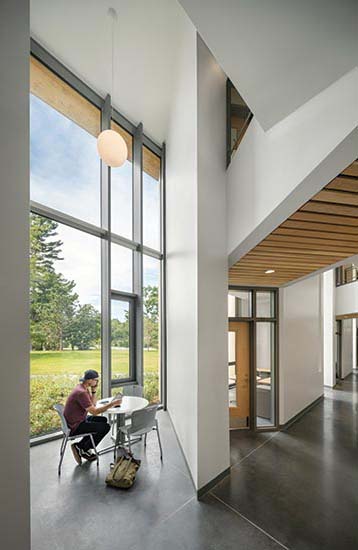 Of course, the $10 million building was designed to be a model of sustainability, using 80 percent less energy than a normally code-compliant classroom or lab. While the college is not seeking certification, it is following the Passive House standard, which requires a thermally robust, airtight envelope for heating and cooling, so that energy use intensity (EUI) is no more than 12k BTUs per square foot per year. A typical building with art studios and labs is 10 times the EUI of the Davis Center, notes Timothy Lock, OPAL principal. 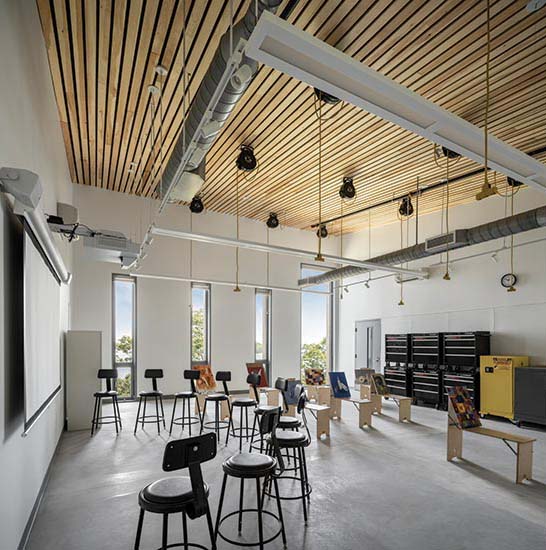 In a painting studio, an acoustical pine ceiling tilts up to take in light and views. Photo © Trent Bell

Almost all of the structure is wood, with its carbon-storing properties, including glulaminated beams and posts (the latter concealed behind gypsum board), and structural floor decking of local spruce. On the exterior, local northern white cedar, with ship-lapped joints in a horizontal and vertical pattern, acts as a rainscreen.

The building is insulated with dense-pack cellulose in all wall and roof cavities, and the exterior walls above grade are built with 5½ inches of continuous, rigid wood-fiber insulation board.

The architects minimized expanses of glass at the back of the building to afford protection against the strong winds coming off the water from the north and east. All windows are triple-glazed and treated with a UV-reflective coating perceptible to flying birds but not humans.

The wings facing to the south deploy larger expanses of glass, to take advantage of the sun’s light and warmth in winter, but a brise soleil of horizontal metal grating mitigates solar load, while deep vertical cedar fins alternate with vertical steel framing on the west-facing wing. 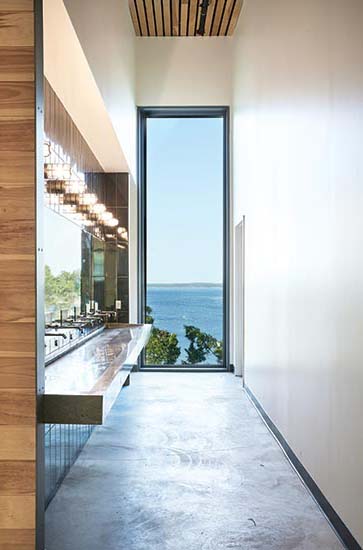 A gender-neutral restroom has a spectacular view of Frenchman Bay. Photo © Jen Holt

Inside the center, natural materials, such as local eastern white pine for the beams, ceilings, and wall paneling, add texture and warmth. For heating and cooling, the design emphasizes passive measures, with only a simple mechanical system supplying 100-percent outdoor air. On the roof, the array of solar panels is expected to cover 75 percent of the total EUI, in accordance with COA’s requirements for all new buildings on campus.

The Davis Center conforms admirably to the college’s goals for sustainability, as well as being a place where students can meet and pursue programs that take advantage of the outdoors, including the study of agriculture on two farms owned by the school and marine life on two offshore research stations. The school-year weather can be challenging, with gusty sea air and the occasional nor’easter—and sometimes a blinding blizzard as early as Thanksgiving. Yet the students find much to do after the summer people have gone home. And now they have the new Davis Center to help them interact with each other, enhance their academic investigations, and bond in a new way with nature. 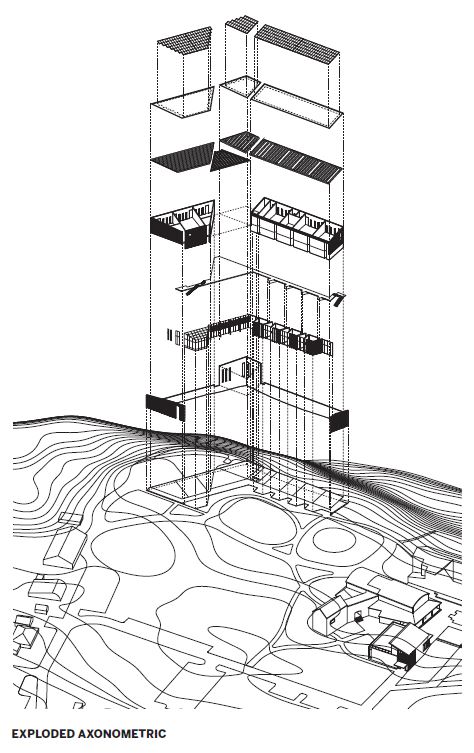