A new house in Mexico City is defined as much by light and shadow as it is by the brick, concrete, and wood that give it form. Architects Sebastian Mariscal and Alfonso Frade designed the four-bedroom, 4,700-square-foot suburban residence for a family of four in Las Águilas, an upscale neighborhood on the southwest side of the city. With generous connections to the outdoors, the dynamic structure presents a private but intriguing face to its surroundings. 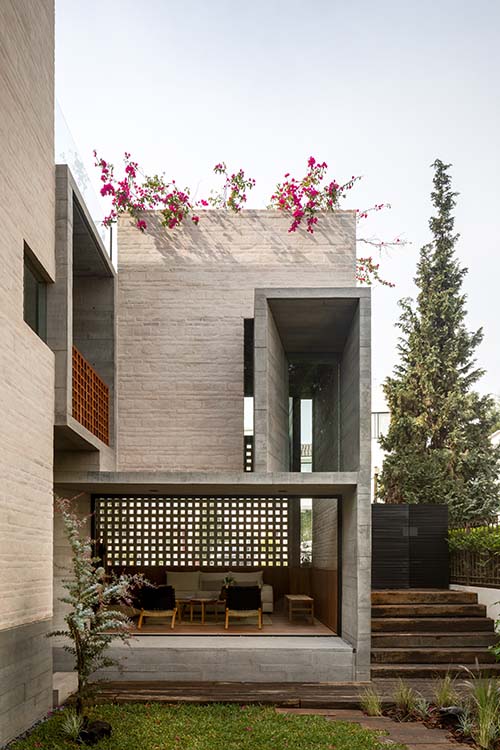 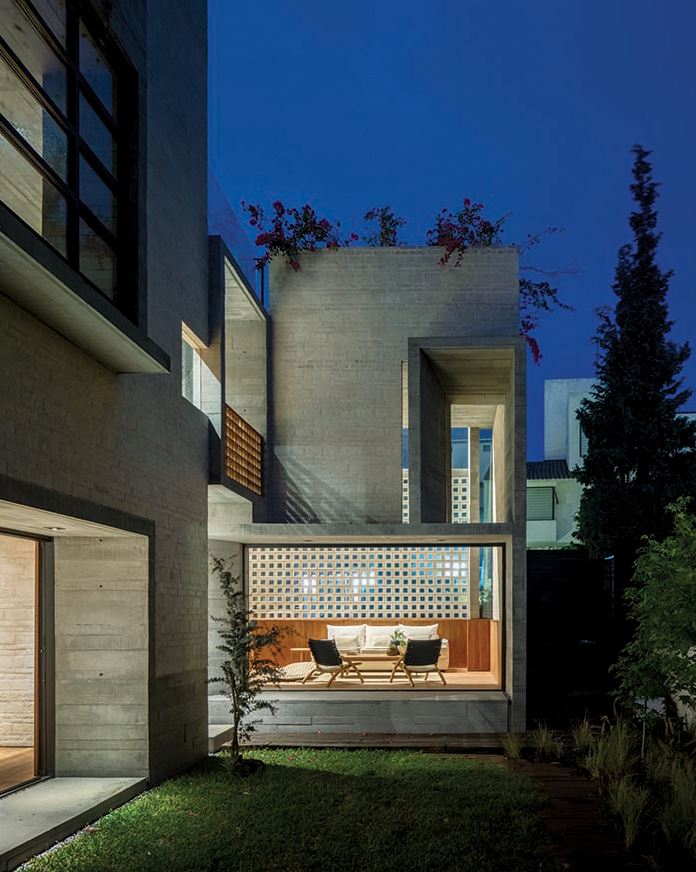 The clients—a businessman, a photographer, and their two teenage children—came to Mariscal, a family friend, with programmatic requirements and priorities but an open mind regarding the design. “They were just excited to live in a modern house that was at the same time very warm and pleasant,” says Mariscal, a Mexico City native whose practice is now based in Boston. He helped the clients identify the site—an empty sloping lot in a gated community with nearly 90 homes—and pinpoint their priorities: togetherness, intimacy, and comfort. Frade, who previously worked for Mariscal in San Diego, where the architect’s practice was formerly based, collaborated with Mariscal on the design, providing local expertise and also acting as general contractor.

A screen of 4-inch-square hollow concrete boxes, each including a pane of glass, make up the house’s facade, imparting a sense of privacy despite its porosity. Shocks of bright pink bougainvillea spill over the top edge from planters on a roof terrace. And although the house abuts another residence, it seems to stand alone. “I wanted to create a feeling of mystery about what is within the house,” says Mariscal. “You don’t see much from the street—how big it is, or even how many stories it is.” Anticipation and curiosity build as you approach the deep ­wood-wrapped entryway—which, at just 7 feet high, is intentionally compressed. It presents a surprising contrast as you step into the double-­height foyer where, as the architect puts it, “You begin a journey of discovery.” 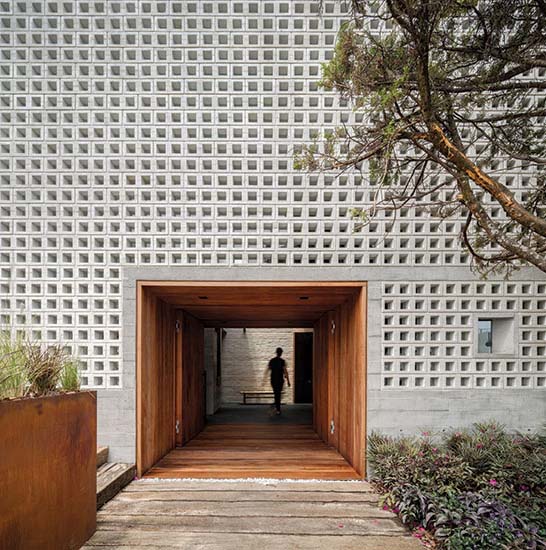 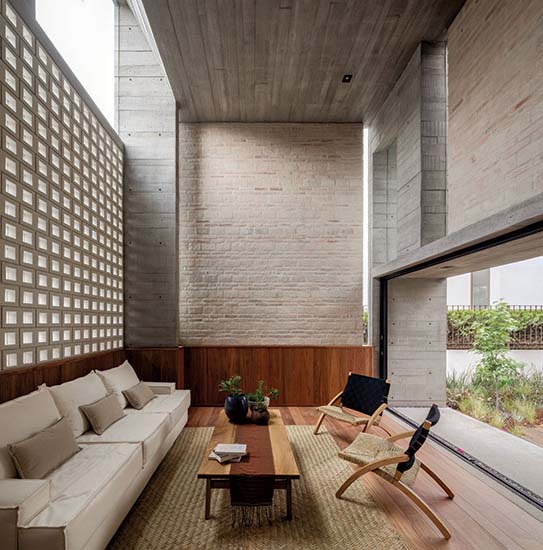 A glazed wall in the living room fully opens to the garden.

Inside the poured-in-place-concrete structure, the lively complexity of the section begins to come to life. Overhead, a bridge connects the client’s home office, placed along the front edge of the residence, with the bedrooms of the second floor and a staircase up to the third and top floor. To the left of the entryway, the living room opens to the back garden via a movable glazed wall. In the afternoon, the square frames of the concrete facade cast a checkerboard of sunlight, above the generous glazing, onto the concrete upper walls of the double-height room. Walking further into the ground level, spaces become increasingly private; you first reach a formal dining room, which also opens to the garden, followed by a daily-use dining area, and finally the kitchen. As the more intimately scaled passageways open up to spacious rooms, varied ceiling heights differentiate each area—a strategy Mariscal employed to break up the volume of the structure, while responding to the sloping topography of the site. “You can get lost inside some larger homes, because the spaces are not contained,” he explains. “Here, I wanted you to flow through the house, and be hugged by it in a different way from one place to the next.” Slight changes in floor elevation, such as the three steps you descend from the entry hall to the dining room, also heighten the awareness of traveling through different zones. 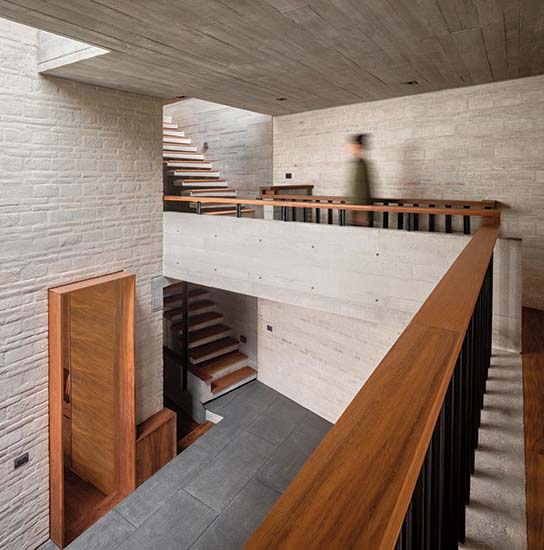 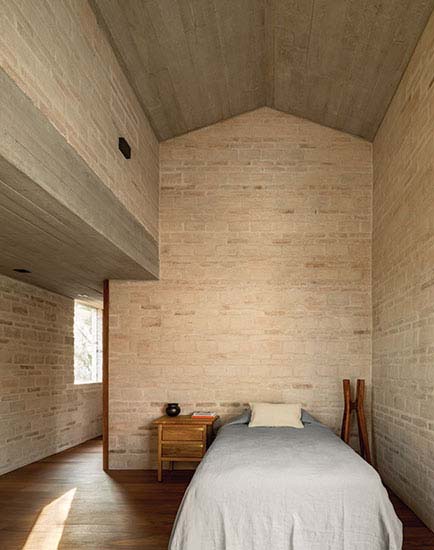 Suspended above the entry vestibule, a concrete bridge (1) connects the home office to the second- and third-floor bedrooms (2). 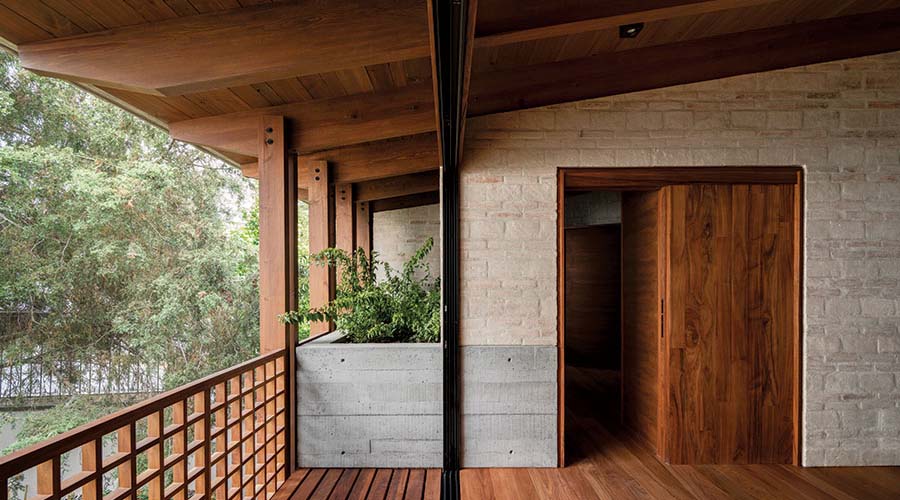 A wood balcony overlooking the garden spans the full length of the master bedroom.

From the back garden, the home appears almost as a cluster of volumes, each with their own character: the double-height street-facing living room, topped by a garden overlooking the roof terrace; a three-story tower, housing the children’s upper-floor bedrooms beneath a gabled roof that bears a photovoltaic array connected to the municipal grid; and a two-story volume at the back, where a wooden screen encloses the second-floor balcony of the master suite. Throughout, generous windows allow for easy access to enjoy Mexico City’s mild climate, while the clever and unexpected placement of skylights and other glazed openings pulls daylight deep into the interiors. 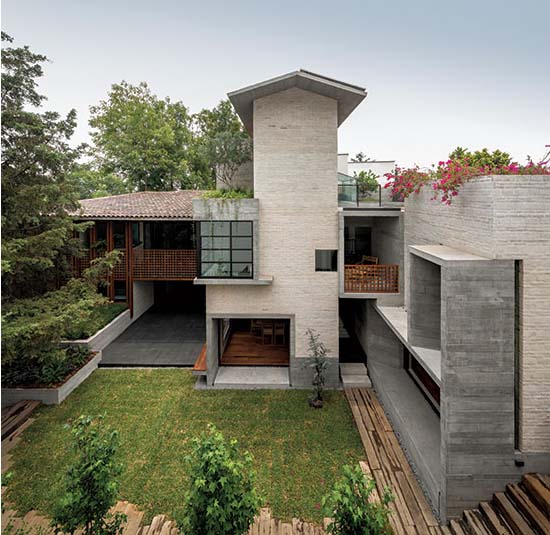 The top bedroom of the central three-story tower looks out at an olive tree, planted in an elevated bed, and opens to the roof terrace. Photo © Rafael Gamo

Despite the focus on differentiating spaces, a limited material palette unifies the house, providing continuity and rooting it firmly in its context. “It celebrates Mexican craftsmanship in every corner,” says Mariscal. At its base, masonry clads the concrete structure—a locally produced red brick, painstakingly coated with a mixture of sand, mortar, and white cement. “The artisanal finish had to be done by just one person to look consistent,” explains Frade.

Between the gleaming warmth of tzalam wood, the diffuse ­brightness of the treated brick, and the pleasing roughness of the board-formed concrete, the house offers a study in contrasting textures. Add to these the constant, subtle changes in light and shadow, and the quality of light within the residence, which oscillates between luminous, dramatic, and moody, depending on time of day. 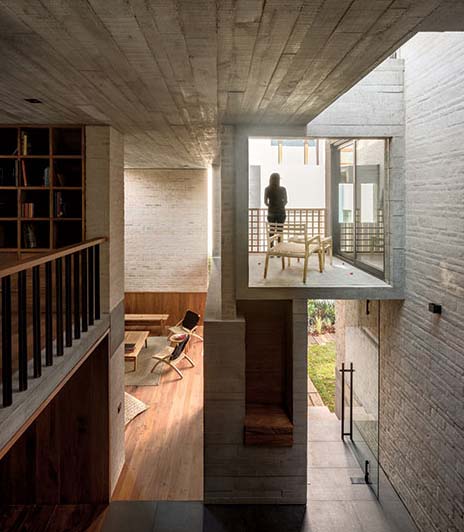 A skylight and second-floor patio pull natural light into the entryway, which connects to the backyard. Photo © Rafael Gamo

The architects designed the landscape, which extends beyond the ground-level garden to lush elevated planters on the second and third stories of the house, with the cascading bougainvillea as well as vinca, and even an olive tree. “Vegetation softens the building and creates a dialogue, a dance between construction materials and organics,” says Mariscal. A rainwater catchment and filtration system provides water for the landscaping.

The house has no mechanical cooling system, but instead depends on its plentiful openings for cross ventilation and thick walls for insulation. Even during Mexico City’s rainy summer months, windows and doors can remain open, thanks to deep thresholds that shelter the interiors. Year round, Casa Zenteno invites occupants to truly live in the landscape of their suburban oasis. 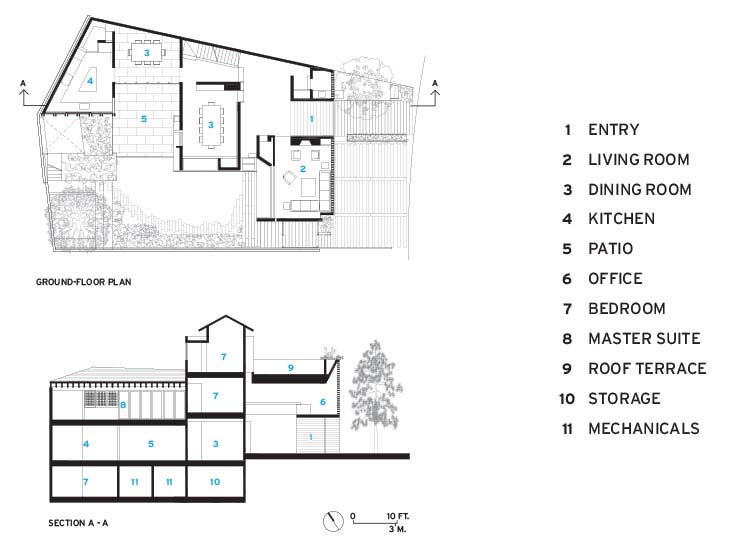