Sweden’s capital city has ambitious twin climate goals: fossil-fuel-free operations and net zero greenhouse-gas emissions by 2040. And the construction sector is critical to its success: to meet these targets, more than half of its emissions reductions must come from buildings. The greatest building-related savings will come from heating, as an already efficient citywide district heating grid (covering 80 percent of Stockholm’s structures) shifts to renewable-energy sources. At the individual-building scale, a key strategy requires almost all new construction to achieve net zero carbon by 2030. One indicator of progress to date is the city’s meeting its 2020 emissions milestone two years ahead of schedule, achieving a maximum of 2.2 metric tons per resident in 2018 (down from 2014’s 2.7 ton benchmark). “So, yes,” says Björn Hugosson, Stockholm’s chief climate officer, “the target will be achieved.”

Getting a head start on the 2030 deadline, Stockholm instituted a requirement eight years ago that new residential and commercial buildings on municipal land operate at a maximum 55 kWh/m2, an energy use intensity (EUI) equivalent to the Passive House standard. More than 60 percent of the city’s geographical area is owned by the municipality, and Stockholm Royal Seaport, a 585-acre brownfield development on publicly owned waterfront, represents a leading edge in sustainable urban development worldwide.

Begun in 2009, with completion anticipated in 2030, Royal Seaport will comprise at least 12,000 new homes and 35,000 workplaces, all designed to comply with the EUI 55 limit. The project’s 20-year timeline allows for iterative learning, and each building’s energy performance is assessed when two years of post-occupancy data have accumulated. “We are not just setting an ambitious standard, but we are also following up with verification,” says Christina Salmhofer, the development’s sustainability strategist. Discrepancies between the project’s predicted and actual energy consumption demonstrate the importance of that commitment. Measured performance values of completed buildings are averaging 73 kWh/m2, and, while that’s still 15 percent below Sweden’s nationally legislated target, it’s well above the EUI 55 limit that modeling shows the buildings, as designed, were capable of achieving.

The shortcomings result mainly from construction quality-assurance issues, especially in regard to thermal bridging in facades, and from inadequate testing and refinement of building systems to operate as designed, complicated by insufficient metering. “It’s really sad,” says Salmhofer, “because there was so much capacity-building during the design processes.” That capacity-building, or training, focused on developers and designers, however. So, while developers understand the effort involved and the importance of the standard, and architects and engineers are capable of designing to it, more education is needed for the construction and operations phases of projects, she says. “This is the challenge facing the industry right now.” 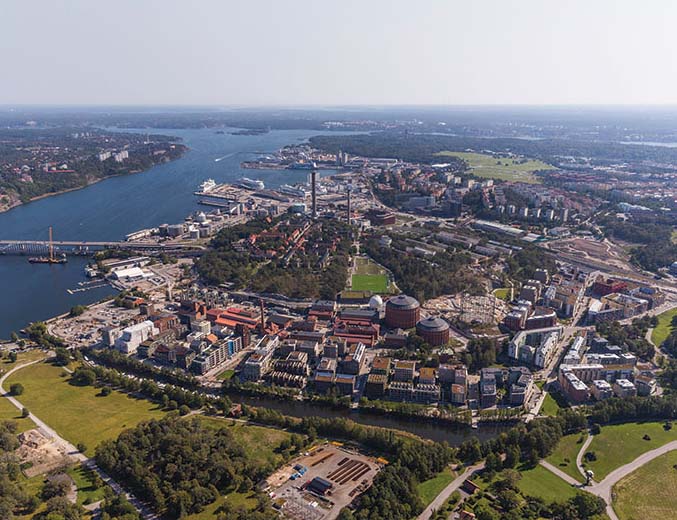 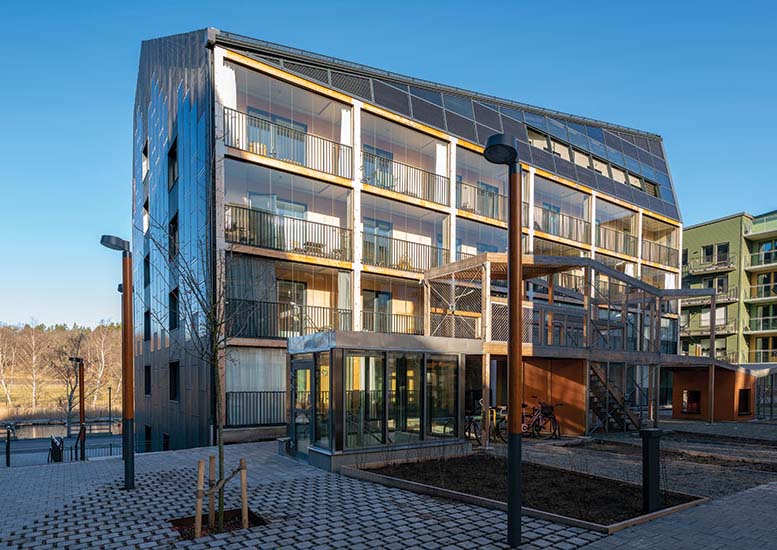 One large-scale development on 585 acres of city-owned property is the transformation of Stockholm's seaport into 12,000 residences and 35,000 workplaces (1). The latest phase of the project includes apartment buildings by DinellJohansson (2), designed to produce more energy than they consume. In addition to high levels of insulation, a compact form, and effective daylighting, the buildings’ balconies have a separate, self-supporting structure—a strategy that minimizes thermal bridging. Photos © Lennart Johansson (1) ; Eric Cung Dinh (2), click to enlarge.

Meanwhile, the fourth phase of Royal Seaport’s build-out is under way and features residences designed to an even higher standard, net positive energy. Completed in 2019, a pair of buildings designed by local architecture firm DinnellJohansson, with energy consultant InCoord, contains 43 dwelling units with a design EUI of 14.8. Building-integrated solar panels generate 16.1 kWh/m2/year, supplemented with wastewater and ventilation heat exchangers and geothermal energy. In addition to high levels of insulation, effective daylighting, and a compact form, the project’s balconies are integral to its energy strategy while serving as an amenity for residents. As self-supporting elements that are separate from the building’s structure (thereby eliminating thermal bridging), the balconies wrap each building in its own microclimate, which can be adapted using operable external screens to take advantage of the prefabricated concrete structure’s thermal mass.

The Plus Energy houses were already complete when performance metrics from earlier buildings became available, so it may turn out that the newer buildings also suffer from construction-phase shortcomings, but the project team is working hard to control the operations and maintenance variables those earlier tests highlighted. Data will be reported after one year, with a more reliable assessment expected after two.

Looking ahead, Salmhofer says Royal Seaport’s next priority is the creation of regenerative systems throughout the development, such as heat extraction from graywater and agricultural-nutrient extraction from blackwater. “Moving from the building level to the city level—with more integration and more connection—is definitely the next step,” she says.