Like other cities with strong commitments to combating climate change, Vancouver, Canada, is targeting citywide carbon neutrality by 2050. Because half of the metropolis’s existing building stock is expected to have been replaced by then, emissions limits apply to new construction first. “Everything that’s not a solution today becomes a problem later,” says Doug Smith, sustainability director at the City of Vancouver.

Within the overall 2050 limit, the municipality’s Zero Emissions Buildings Plan (2016)  establishes a finely sliced series of deadlines reflecting the degree of challenge faced by various building types. Commercial and residential projects have the lowest hurdle in reducing emissions, with plenty of successful precedents. As of 2025, zero emissions buildings—those that are highly efficient and meet their energy needs from renewable sources—will be the only new construction permitted in these two categories. More specialized buildings, such as schools, hospitals, and industrial facilities, will have a little longer to achieve the target—until 2030. “It’s important to set those limits far in advance so that industry understands what they are and when they’re coming,” says Smith, “so there are no surprises.” To date, emissions from new buildings in the city have dropped by 43 percent compared to a 2007 benchmark.

In addition to regulating, the municipal government is also leading by example. As Vancouver’s single biggest landlord, with a portfolio of over 600 buildings, the city began imposing a zero-emissions requirement on its own new construction—including libraries, fire stations, community centers, and police stations—two years ago, and is now working to bring its existing buildings to zero emissions before 2040.

For all other existing buildings, the city is developing a plan in consultation with residents and industry for a target deadline of zero emissions by 2045. Achieving zero emissions presents a bigger challenge for older buildings—and a more delicate one, says Smith. “You don’t want to create an equity issue where wealthier homeowners can afford to meet the new standards, and people just getting by can’t.”  The initial approach will focus on raising awareness of emissions levels through reporting on energy consumption and encouraging the integration of reduction measures into scheduled maintenance and replacements. “Our strategy for the next three or four years is to start educating existing building owners,” says Smith. The plan is expected to go before council in October this year.

As well as setting limits, providing leadership, and catalyzing change (with available tools such as regulations, funding, and density incentives), Vancouver sees education as critical. “Everything we’re doing now, we’ve never done before,” says Smith, “so we need to work with industry, to help them reduce their learning curve.” The municipality subsidizes training for trades in the techniques of zero-emissions construction, such as tight building envelopes and blower door testing. It has also instituted a Zero Emissions Building Exchange (ZEBx), which pays the developers of cutting-edge projects to hire technical and engineering students to document the process, including notes, photography, videos, and site tours, all concluding with a published report of successes and lessons learned. “The role of ZEBx is to bring together members of what’s otherwise a very competitive industry,” says Smith, “and have them learn from each other.”

As of this past February, zero-emissions projects in the city’s pipeline included 344,000 square feet approved for building permits, 909,000 square feet approved for rezoning or development, and 3.91 million square feet in inquiries and applications. Most of these projects are designed to the Passive House standard, with the remainder designed to the net zero criteria of such programs as the Living Building Challenge and Natural Resources Canada’s R-2000. 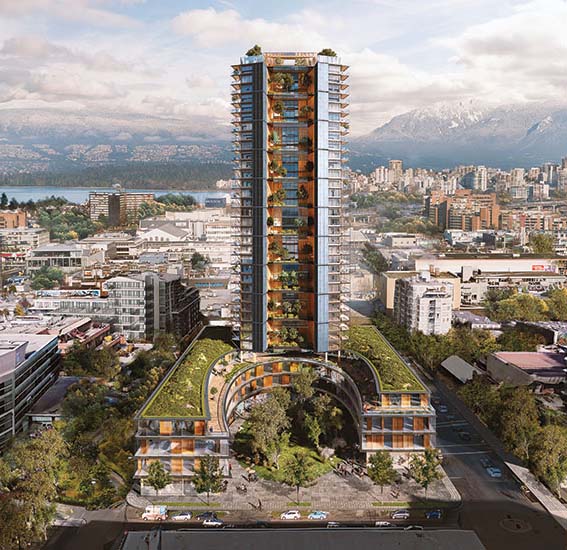 Canada’s Earth Tower, which rises from a U-shaped podium (1) and includes coworking space (2) and 200 apartments, has such features as multistory winter gardens (top). The project is targeting Passive House certification and is helping inform the development of the Canada Green Building Council’s forthcoming Zero Carbon Building Standard. Images Courtesy of Perkins and Will, click to enlarge.

As an example of the type of project waiting in the wings, a 40-story hybrid mass-timber tower now in design at the local office of Perkins and Will is helping to inform the development of the Canada Green Building Council’s forthcoming Zero Carbon Building Standard. In addition to its zero-emissions operation, Canada’s Earth Tower, as the planned mixed-use building is called, will sequester carbon in its wood structure. “Timber buildings built to the Passive House standard are absolutely what we all should be doing to address climate change,” says Derek Newby, a Perkins and Will associate principal. With a growing number of built examples in Vancouver and worldwide, he says, “both strategies are well understood and achievable now.”