Advocates of New York’s Local Law 97 refer to it as the most ambitious climate legislation for buildings enacted by any city in the world. The claim might sound like hyperbole, but John Mandyck, CEO of the Urban Green Council, a nonprofit that helped shape the regulation, points to its scope and scale. It applies to 50,000 existing buildings—any that are 25,000 square feet or larger. These structures amount to 60 percent of the city’s floor area and are responsible for 40 percent of total greenhouse-gas emissions. By 2030, the law is expected to reduce emissions from large buildings by at least 40 percent compared to a 2005 baseline, which means cutting 5.3 million metric tons of carbon dioxide from current levels, the equivalent of San Francis­co’s citywide emissions.

The most consequential piece in a package of bills known as the Climate Mobilization Act, the law was passed by the City Council in April last year. It sets increasingly stringent limits for the amount of CO2 facilities can emit based on building type. The first set of regulations go into effect in 2024, targeting the most carbon-intensive 20 percent of buildings, while the 2030 limits target the most carbon-intensive 75 percent. (Subsequent limits will be set by the Department of Buildings to achieve an 80 percent reduction in emissions citywide by 2050.) These thresholds are not aspirational but statutory, points out Mandyck: owners who fail to meet the limits face steep fines.

How can owners bring underperforming buildings into compliance? They can put new operating strategies in place, implement energy-saving retrofits, or buy green power. Work can be financed through a special low-interest loan program. Some building types—income-restricted housing or places of worship—can opt instead to complete a prescribed set of low-cost energy-saving measures, including insulating pipes, installing boiler sensors and controls, and fixing heating-system leaks.

Although the measure is aimed at upgrading existing structures, a year after a new building is completed, it is subject to the law’s stringent reporting requirements and emissions limits. Some proponents maintain Local Law 97 isn’t strict enough for new construction or projects that involve significant renovation or expansion. “New buildings should have different requirements,” says Stas Za­krzewski, principal of ZH Architects, who sits on an advisory board helping guide the law’s implementation. He points to two of his firm’s recent projects: a five-story condo building in Brooklyn that incorporates a three-story existing structure and an all-new 55-unit rental residential tower in Manhat­tan. The smaller building, at only 7,000 square feet, is not subject to Local Law 97. Nevertheless, it is expected to meet the anticipated 2050 emissions limits for residential construction—offering an example that other projects could emulate, with its highly insulated, airtight building envelope, triple-glazed windows, and minimized thermal bridges. Many of these strategies have been deployed on the tower, which has projected emissions far below the 2050 limits. 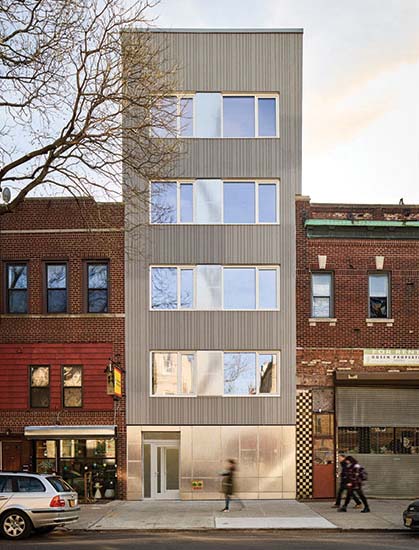 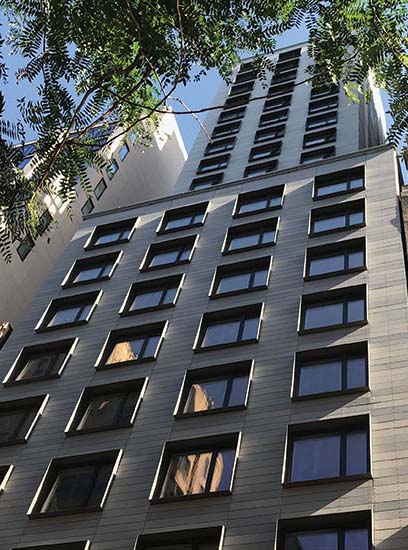 Some advocates of the law worry that it does not deal well with carbon-intensive uses, ­including those of trading floors and data centers. “This is a legitimate concern,” says Mandyck. “The carbon metric is straightforward, but it is a blunt instrument.” He suggests that a cap-and-trade scheme like Tokyo’s could be a remedy; his organization is involved in developing the carbon-­trading implementation plan that the law requires. It would allow a building with justified high-energy uses to buy credits from another building with emissions below its target.

It is too early to know how many out-of-­compliance owners will perform retrofits, buy offsets, or simply pay the fine, notes Richard Yancey, executive director of the nonprofit Build­ing Energy Exchange. But he is optimistic about the language of Local Law 97, which includes placeholders for programs like carbon trading and allows for other future adjustments in order to meet its reduction targets. It’s “critically important” to get these modifications right, says Yancey: “Cities all over the world are looking to New York.”