When the San Sa Village hotel opened last September in Beigou, a village about two hours northeast of Beijing, near the Mutianyu section of the Great Wall of China, “coronavirus” had yet to enter the popular lexicon, and the term COVID-19 did not exist. It was the pre-lockdown era, and Chinese people were still traveling for leisure in unprecedented numbers.

Domestically, tourism increasingly meant heading to the countryside. And with its 16 rooms spread among a cluster of low brick buildings, San Sa Village joined a mini-spate of homestays and guesthouses that were opening in Beigou, a small enclave otherwise known for its chestnuts, walnuts, and picturesque views of the mountains and the Great Wall. 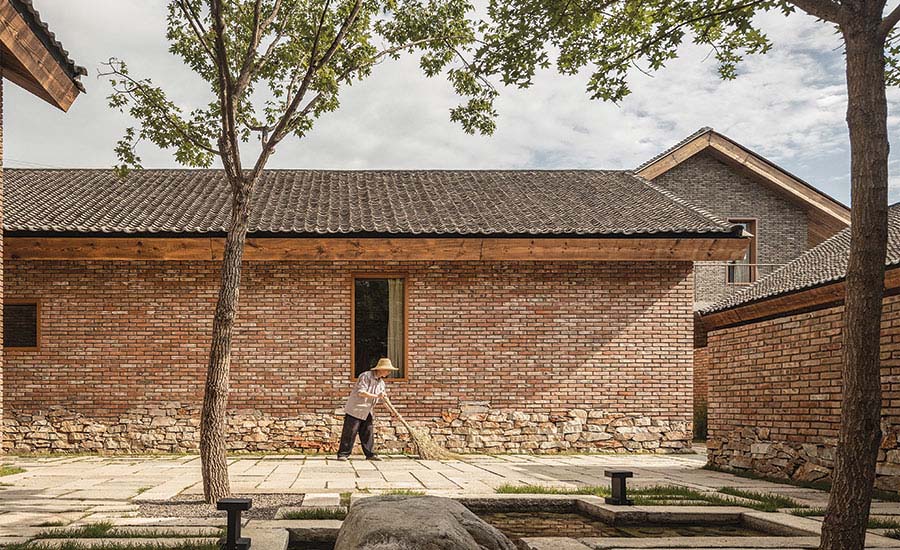 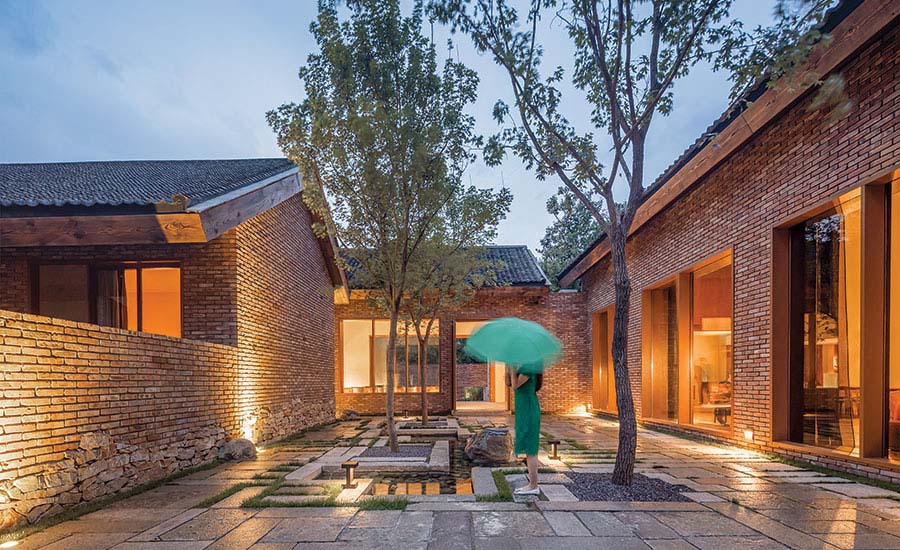 The 16-room hotel is a neighborhood-like cluster of low-slung buildings connected by courtyards and terraces (top and above). Locally sourced wood and fieldstone, as well as red and gray brick, lend the complex a rich texture. Photos © Fernando Guerra, click to enlarge.

Before COVID-19 brought travel and so much else to a halt, China was experiencing a boom in rural architecture as the government unleashed a raft of initiatives aimed at narrowing the country’s yawning rural-urban economic divide. Following in the footsteps of Wang Shu, Liu Jiakun, Zhang Lei, and others, a generation of younger architects was transforming the ­countryside with new guesthouses, community centers, museums, housing, workshops, and other projects that combined local materials and knowhow with a sensitivity to site, scale, rural life, and the people who comprise it.

In fact, when the Shanghai office of llLab. first got the San Sa Village commission in 2015—“This project took four years, a very, very long time in China,” says llLab. partner Liu Hanxiao—it was a different era in China’s rural development too. The client, a developer, had previously hired another architecture firm whose proposal for the site was somewhat banal: “a three-story hotel with a driveway entrance; a big lobby with a fireplace and water feature in the middle; and guest rooms around it, all under one roof,” Liu recalls. “Think of the most typical thing you can imagine—that was it.” Sensing the shift in architectural tides, the client approached llLab. (pronounced “el-el-lab”) for an alternative, and the studio came up with what it calls a “village within a village.” 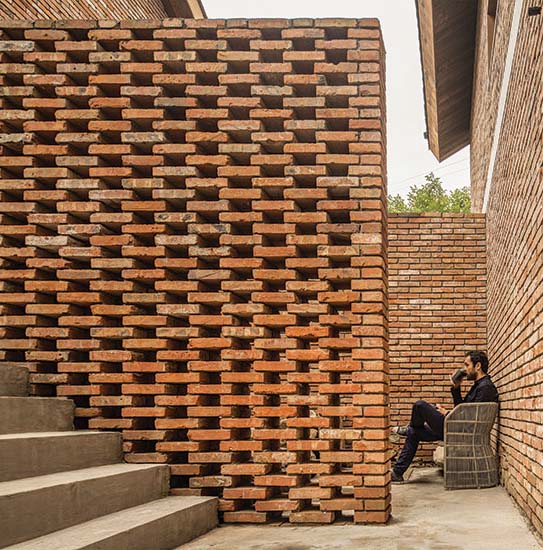 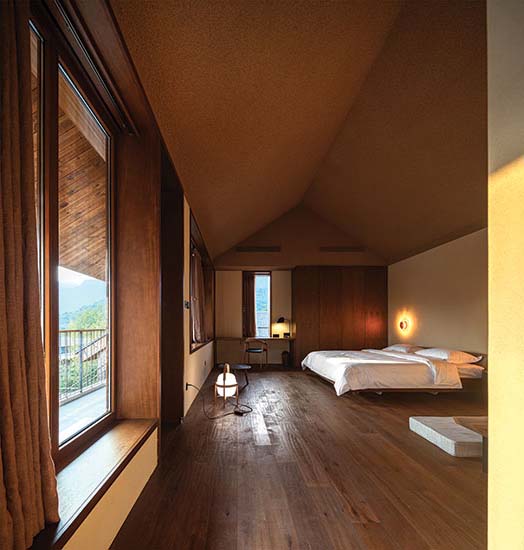 Ample outdoor spaces and serene guest rooms, with strong connections to the mountainous landscape and the Great Wall beyond, offer opportunities both for gathering and solitary contemplation. Photos © Fernando Guerra

Located on the southeastern edge of town, where a gas station once stood, San Sa Vil­lage’s 10 one- and two-story brick pavilions, housing guest rooms, a dining hall, multifunctional room, and reception area, huddle on a 25,000-square-foot site. In determining their arrangement, Liu and his team looked to traditional typologies, but opted against the rigid formality of the orthogonal courtyards that are endemic to northern China. Instead, they went for a more irregular, southern-Chi­nese-inspired configuration that creates a sense of intimacy while giving each building its own sight lines and views. “Each has its own private corner that you can enjoy,” says Liu.

At the same time, large windows, outside spaces, and the structures’ close proximity encourage interactions “in a neighborhood-like condition, where you know your neighbor and can chat, and still see each other from the balconies,” Liu says. Meanwhile, instead of walls or other barriers, the team employed different paving patterns and grade changes to more subtly demarcate semiprivate outdoor areas like guest room terraces. Indeed, throughout, llLab. sought to create ambiguous boundaries that delicately negotiate the public and personal—a means of spatially fostering both community and solitude in a way that’s now tempting to think of as social distancing. 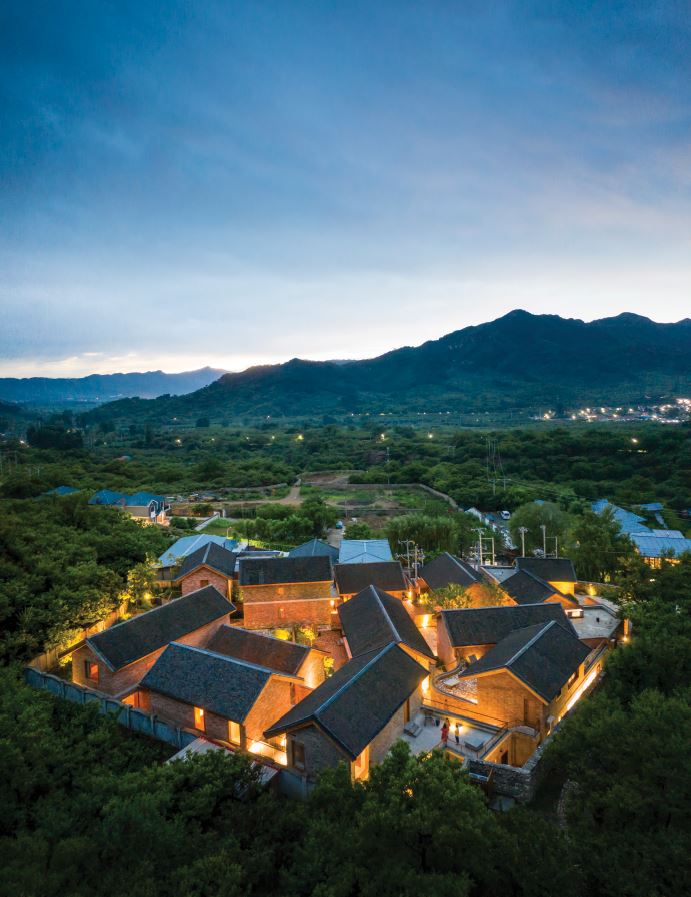 The architects also wanted the hotel to have a porous relationship with the village. While llLab. had no choice but to retain existing walls that belonged to adjacent properties, as many openings were kept as possible. In fact, the project’s relatively long timeline was the result, in part, of an extended process of engagement with local residents. “It took us a long time to understand the village,” Liu says. “We wanted to get to know how people live there, their sense of intimacy, and really make this project part of the village.”

On a practical level, that meant understanding local construction techniques, ranging from concrete framing to brickwork. Fieldstones gathered nearby were used for paving and building plinths, and locally sourced varieties of wood help fill the interiors. A fair amount of improvisation was also required. For example, llLab. initially intended to fully clad the structures in the village’s ubiquitous red brick. However, toward the beginning of construction, the local kilns were shuttered—part of Beijing’s pollution-control efforts—leaving only gray bricks from further afield to make up the difference. Attempts were made to mix red and gray in pixelated patterns but, unsatisfied with the results, Liu elected to simply clad lower floors in red and upper ones in gray. “It was a mutually inspiring process,” he says, referring to the village workmen.

This February, having only just opened, San Sa Village closed its doors—and remains closed, as of this writing—as the coronavirus began taking hold across China. But that doesn’t mean it’s been empty. According to Liu, local residents have enthusiastically taken to using the hotel’s courtyards and other outdoor spaces for their morning exercises and other routines. In this sense, the project has succeeded. “I think the villagers are enjoying this moment, being there by themselves,” he says. 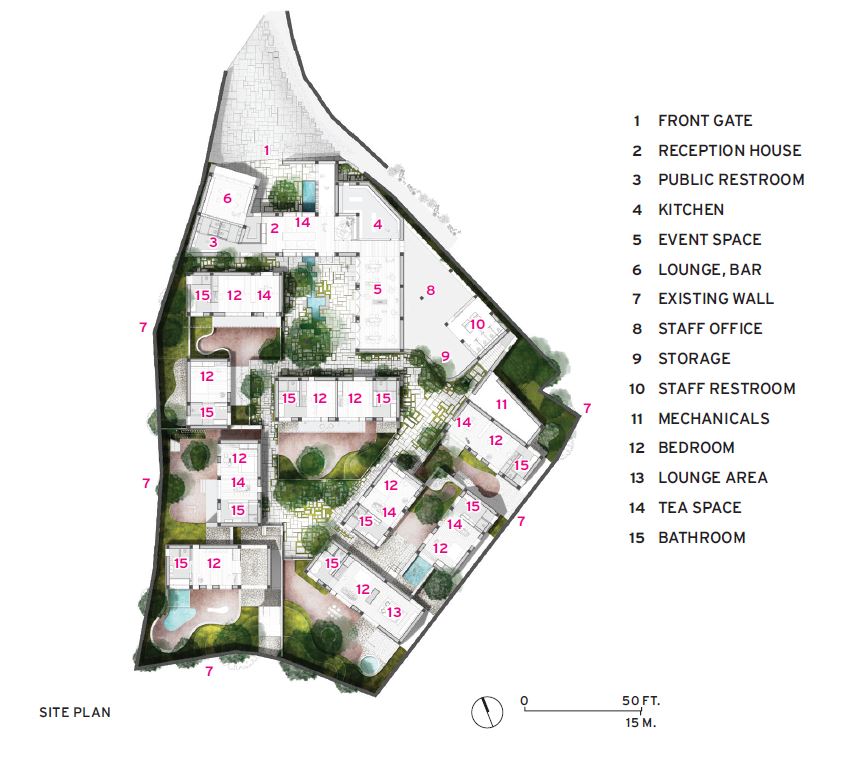