In 2015, the Chinese government designated the village of Zhang Yan, on the western outskirts of Shanghai, as a pilot site for revitalizing the country’s rural areas. Last year saw the completion of a centerpiece of that initiative: the Zhang Yan Cultural Museum, a complex that was a pilot project for its Shenzhen-based designer, Ju Bin, as well.

Dating to the Tang dynasty (618–907 C.E.), Zhang Yan was once a prosperous trading hub, sitting on a bend in the Zhangyan Jin River. Having long ago lost its commercial importance, the village’s location on what’s now the edge of Shanghai made it a convenient testing ground for rethinking China’s yawning rural-urban divide. 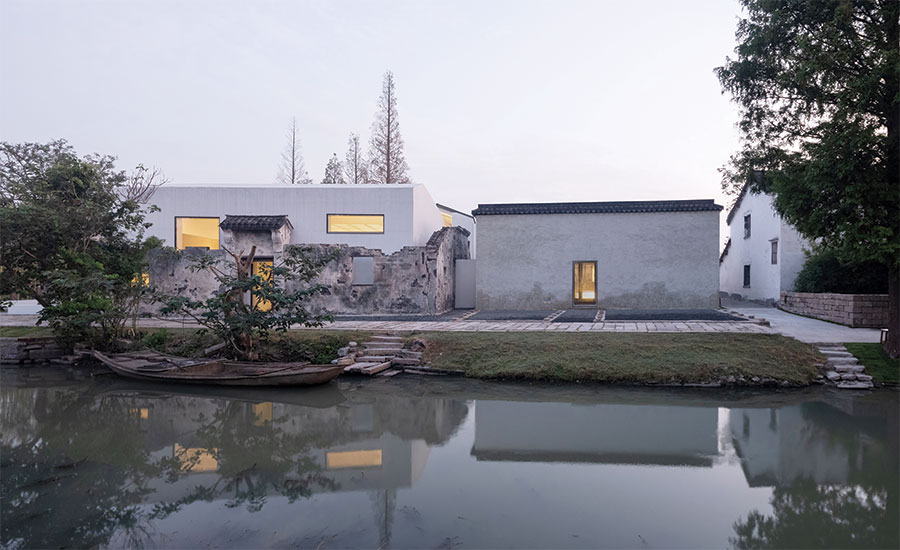 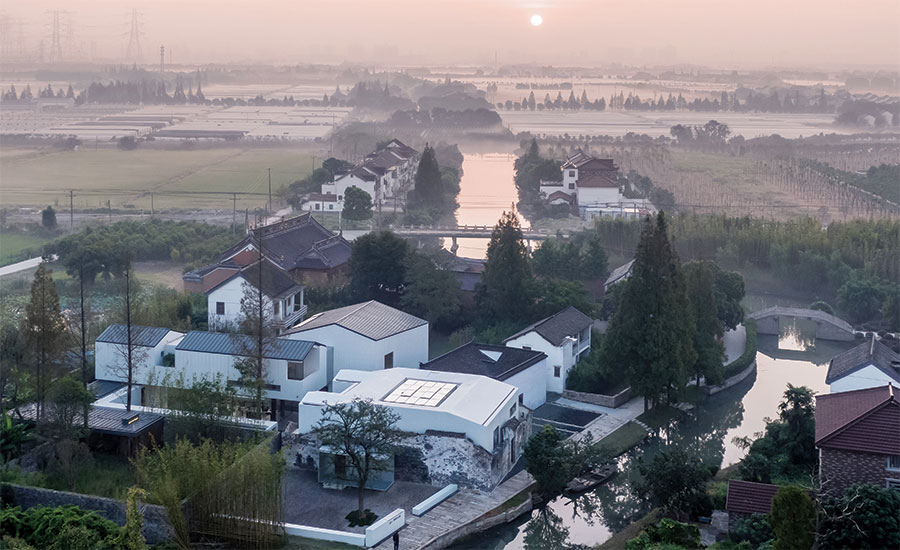 For Ju Bin, the museum is his first ground-up architectural project. Through his firm, Horizontal Design, Ju has become one of China’s most prominent interior designers, known mostly for high-end hospitality projects that give modern syntax to a design vocabulary drawing from traditional Chinese culture, crafts, and typologies. “Until now, as an interior designer, I mostly concentrated on details,” he says. “But this project was a chance to use the same logic between interior and exterior, and work more intensely with the site and its history.”

About an hour’s drive from central Shanghai, the city’s high-rises yield to tree nurseries, fields, and stands of bamboo. In an otherwise bucolic setting, now punctuated by small-scale construction sites, one arrives at the Zhang Yan Cultural Museum by crossing a stone footbridge. (Plans for the village call for an agriculture park, a commercial zone, wellness center, villas, and new housing for current village residents.) Adjacent to a Qing-dynasty (1644–1912) temple, Ju’s complex emerges on the riverside as a kind of three-dimensional stratigraphy: part ruin, partly preserved, partly pristine.

Indeed, the complex’s two front buildings, both late Qing-dynasty residences that formed the genesis of the project, were dilapidated, verging on collapse. In front of the eastern house—whose timber framing had to be restored—an existing structure was beyond salvaging, so Ju cleared it while retaining its granite column bases “to preserve the memory of the place,” he says. The move opened up views to the western building, where only the exterior brick walls, mottled with eroded plaster, remained retrievably intact. Within those walls, Ju inserted a white-finished concrete volume—the museum’s main gallery—whose construction required reinforcing the surrounding historic walls and, in some parts, disassembling and rebuilding them. “That was the most difficult part,” he says. 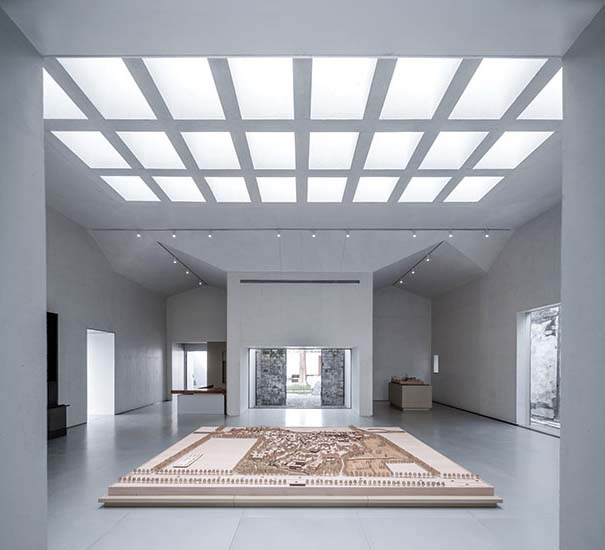 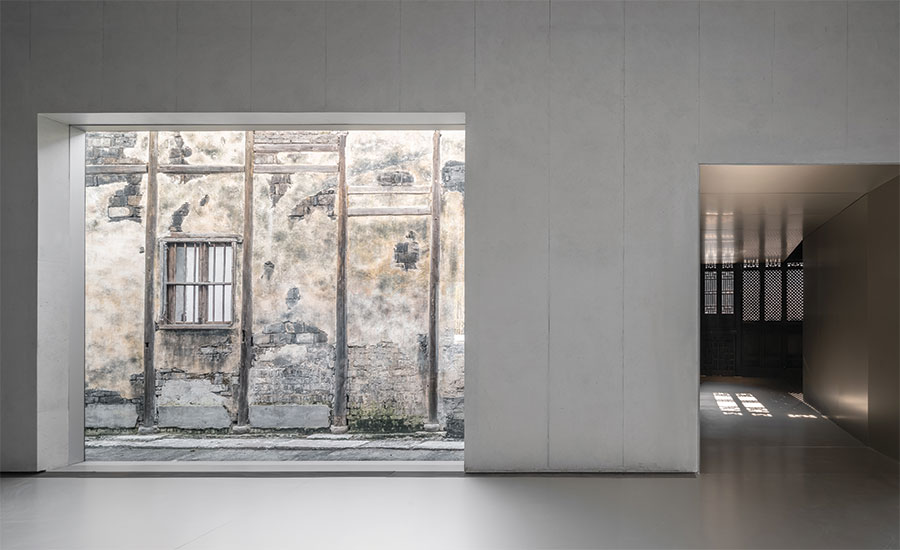 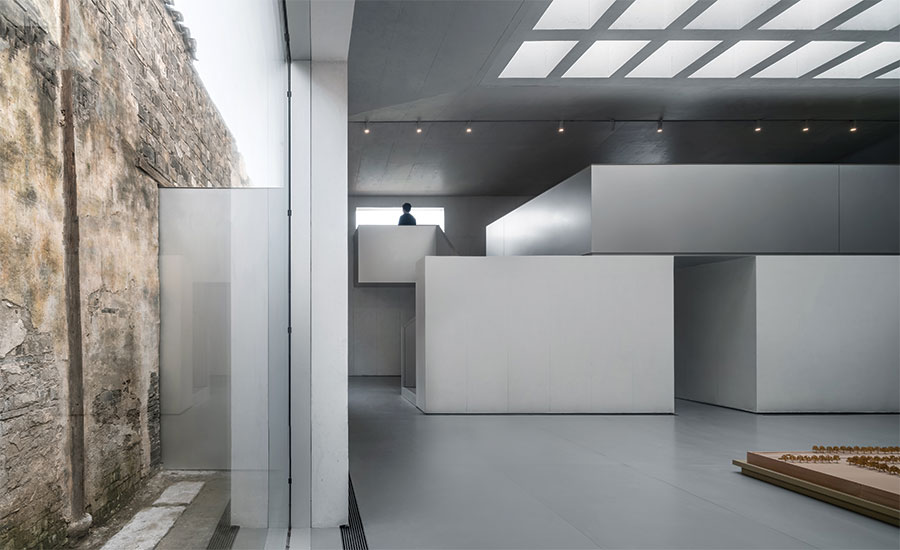 To create a more generous arrival, Ju reoriented the complex’s main entrance to the side of the western house, creating a plaza paved in reclaimed granite, with a preserved locust tree at its center. From there, one enters the double-height main gallery, where daylight filters through a grid of skylights reflecting off floors of anodized aluminum. Extending into a local-history gallery that now occupies the eastern, timber-frame house, the metallic floors are more ethereal than jarring; they put everything in a pleasing soft focus. “A space is not just a space, but a gathering point for the five senses,” says Ju, who’s known as something of a designer-poet. “I wanted this place to inhale and exhale as a form of revival.” 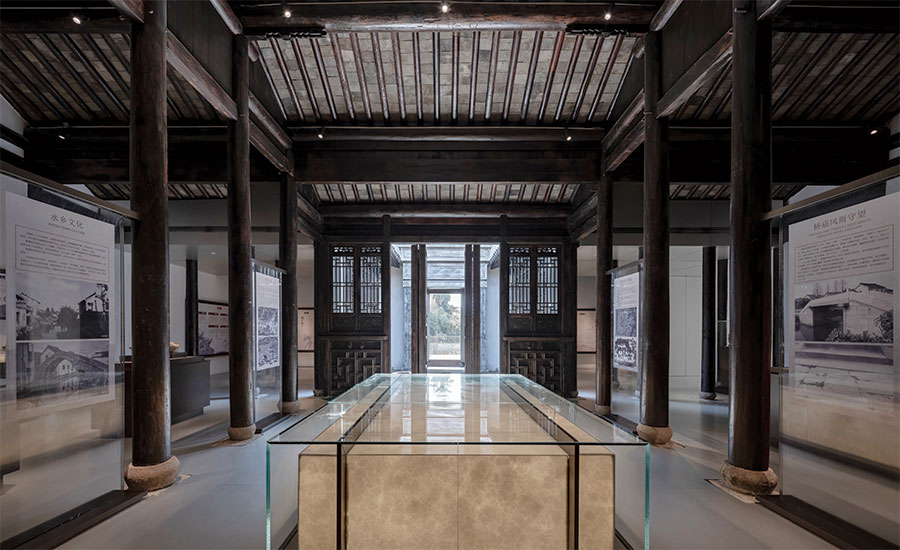 A LOCAL-HISTORY gallery occupies the timber-frame house (6), while a lounge is completely new-build (7). Photos © Su Shengliang 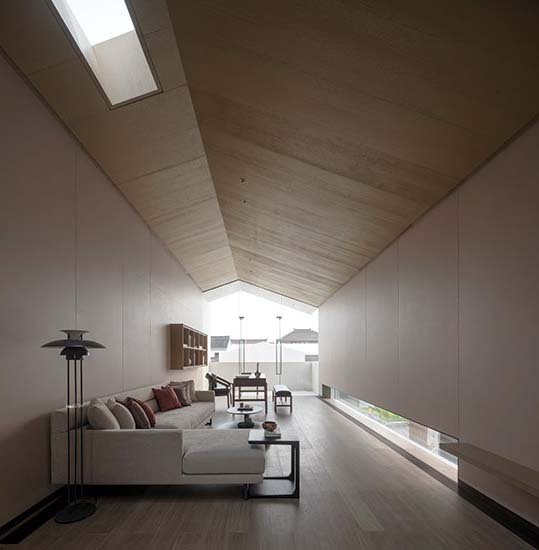 Taking a strategy of “preservation, growth, and renewal,” as he puts it, Ju extended the complex behind the two historic buildings to new, immaculate, white concrete structures that help fill out the 16,000-square-foot site. While maintaining a continuous circulation path, a third gallery—roughly following the footprint of a building that, Ju learned, once occupied the site—was added behind the local-history gallery, connecting to a two-story L-shaped structure (housing tearooms, VIP rooms, and other facilities) that acts as the complex’s spine. On the latter’s ground level, a glass-enclosed café-lounge creates only a transparent barrier between a garden on one side and a reflecting pool on the other. 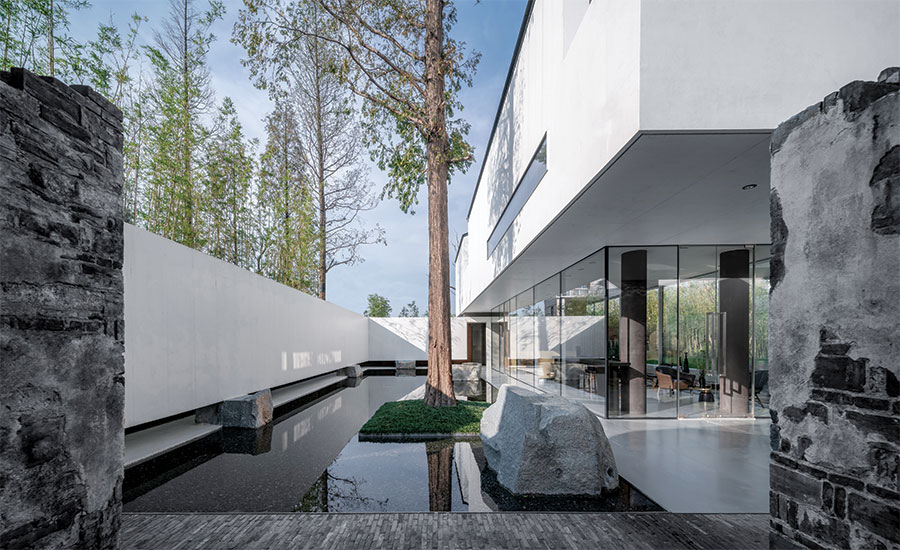 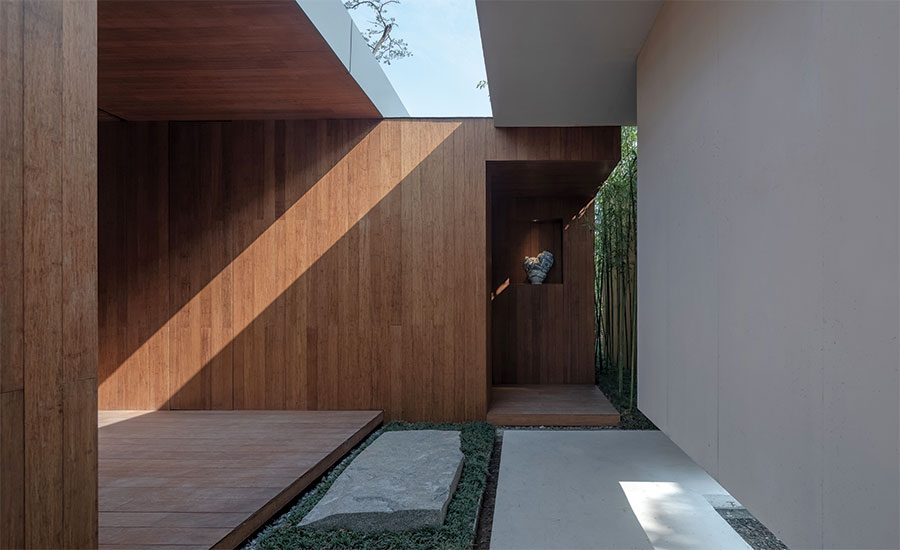 The glazed café looks over the water court (8). Dark wood frames a view into the reading room and tearoom (9). Photos © Su Shengliang

It wouldn’t be a cliché to say that Ju’s design evokes the spatial strategies of Chinese gardens, with their multiplicities of meticulously constructed views. Here, mezzanines, stairs, and walkways seem timed in sequence with cutouts, overhangs, and sight lines. Openings in the interior’s white concrete walls perfectly frame contrasting rustic surfaces behind. A viewing platform “floats” in the pool, which is edged by an 80-foot-long wall that, propped up on granite boulders, appears to float itself. Throughout the project, every joint, reveal, gap, and detail was impeccably thought out and executed, while carved-out volumes and voids deftly manipulate light and shadow. Overall, the complex accomplishes Ju’s goal of juxtaposing the historic with the contemporary through fragmental gestures that come together as a compelling whole. If one had to find fault with the project, it would only be that it exhibits an overabundance of pent-up ideas.

Naturally, Ju designed the interiors—which included selecting the books and teacups that help furnish the VIP rooms—down to the tea that’s served. “It was important to me that everything be integrated,” he says. “My main concern is creating an atmosphere.”

Watch a short subtitled video about the museum and its context. 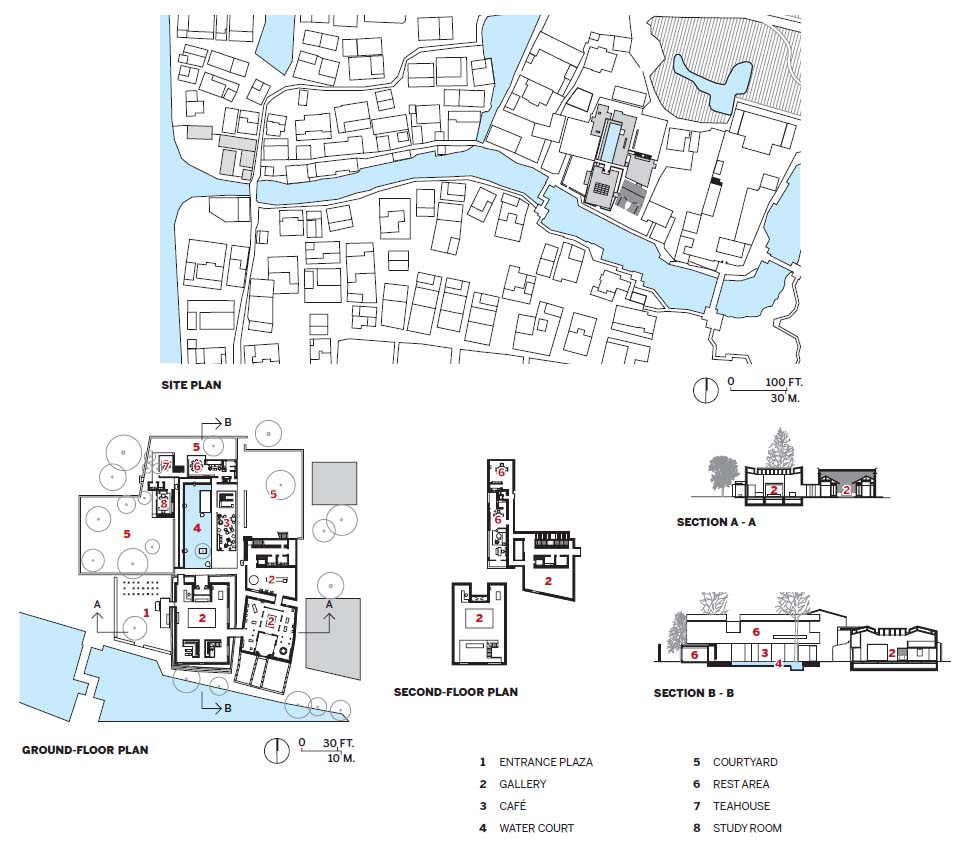