The roofline, with its three wide gables, gives only a hint of what lies within the rammed-earth and copper-clad building recently completed by Shanghai-based Neri&Hu in the southern Chinese city of Fuzhou. But, inside, a Qing-dynasty (1644–1912) timber structure—once framing the house of a high-ranking official—stands like a forest of richly carved wood, dappled by natural illumination as it emerges from the shadows of the interior. 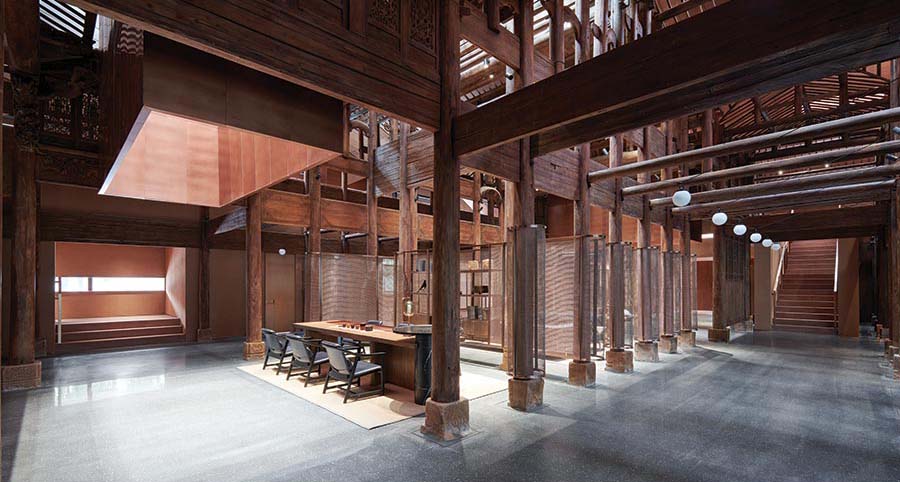 The restored timber frame of a Qing-dynasty house is the main hall’s centerpiece. Photo © Hao Chen, click to enlarge.

The name the architects have given the project—Relic Shelter—indicates its intended effect. The building’s carefully choreographed pathways, rippling water features, and shafts of light washing wood carvings and dark gray terrazzo floors serve as a high-polish exercise in creating an architectural aura around the striking historic construction.

Not bad for a real-estate salesroom.

The building will eventually function as a teahouse. But for the moment, its semiprivate nooks and elegant seating areas are where home buyers and sales reps haggle over finishes, appliances, and unit prices for the two luxury high-rises under construction next door.

“All developers now are given a mandate to do a library, a park, a community center,” explains firm cofounder Lyndon Neri. Under pressure to provide social, recreational, and cultural amenities, but starved of funds, local governments throughout China often rely on land sales—one of their primary sources of revenue and leverage—to require developers to provide them instead. (This helps explain, for example, why so many museums in China are built and run by real-estate companies.)

These public-private facilities have a mixed record of success. However, “the government got involved and told us we should really do this, because it’s not just a showroom,” Neri says of the project. “After this is done, the developers—Yango Group Fuzhou—will give it back to the city.” And in Fujian, a province famous for its tea culture, where Fuzhou is the capital, “it made sense to give back a public teahouse,” he adds.

Located in an older part of town, the Relic Shelter stands out from its context of concrete apartment towers and tree-lined streets. Its reddish rammed-earth base—borrowing a construction method that’s traditional to the region—is reinforced with concrete and crowned by a copper-clad upper level set slightly askew to reveal tantalizing views of the interior. A dark gray terrazzo path zigzags through a reflecting pool by the entrance, leading to the moody double-height main hall enveloping the relic’s spatial grid. 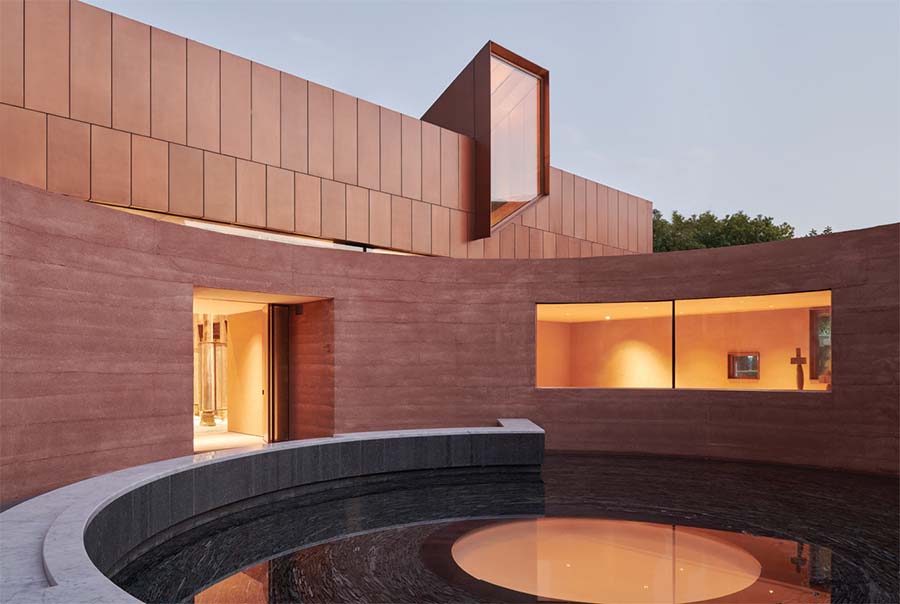 A courtyard acts as a fulcrum for the multifunction rooms, main hall, and apartment towers. Photo © Hao Chen

The old structure, taken from Anhui province, would have originally been a Hui-style house of whitewashed walls organized around wood-framed courtyards. It was probably dismantled a number of years ago by a private collector when such buildings, usually in a severely dilapidated state, were plentiful throughout the countryside, preservation policies were lax, and, often, dismantling was the only option short of demolition. (The situation has improved since then.)

Yango Group acquired the wooden pile midway through design work and asked Neri&Hu to incorporate it. “At first, I thought it was crazy,” Neri recalls. “There’s no roof, no walls, it’s just the structure itself. But then we had an epiphany with the team one night. We realized we could leave it as a relic while using architecture as a way to shelter it”—a building within a building.

The architects have done a delicate, sensitive job utilizing the historic structure as an organizing element. Its bared bones, having now undergone eight months of painstaking restoration, form a cathedral-like nave and side aisles while new skywells, pools, copper-mesh screens, seating groups, and other devices evoke the building’s original courtyard configuration. 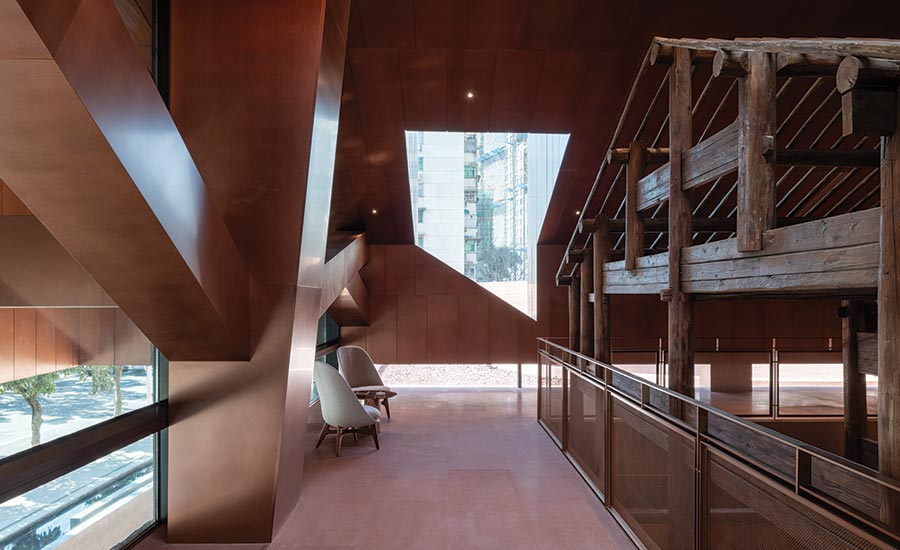 As in other Neri&Hu projects—going back as far as their Waterhouse hotel in Shanghai—the building is punctuated by strategic gaps, reveals, and openings that frame interior and exterior views. Meanwhile, a sense of procession is heightened by level changes leading to a mezzanine that offers views both down into the historic structure and, closer up, onto its elaborately carved brackets and beams as you circumambulate them. 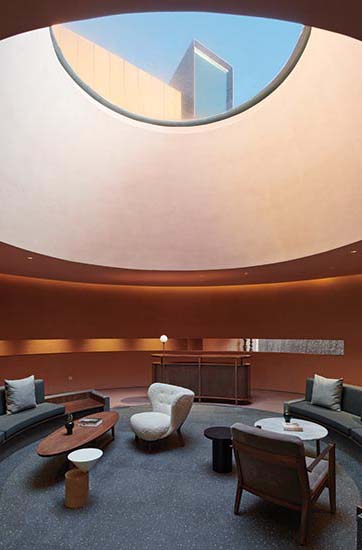 A lower level connects parking to a wine-tasting room, where an oculus offers views to the sky and a curve of slender glazing reveals a sunken waterfall. Photo © Hao Chen

Outside, a circular courtyard acts as a fulcrum among the main hall to the east, multifunction rooms to the west, and access to the apartment towers to the north, with a gap in its perimeter wall offering a glimpse over a reflecting pool out toward the street. Similarly, in the basement, an oculus connects underground parking to wine-tasting rooms that look out to a sunken waterfall trickling down from the pools above.

Neri&Hu have long been known for their fashionable interiors, impeccably detailed spaces with all the “right” touches. In recent years, they have also built a body of projects, ranging from a chapel in Suzhou to an art center in Qinhuangdao, that embed moments of Platonic monumentality within sequences of meandering routes and oblique sight lines, often to sublime effect. In the still frenetic, build-it-first-and-figure-it-out-later context of architectural production in China, this is no easy task. Yet in projects like the Relic Shelter, it can seem that what Neri&Hu are in fact preserving is that old-fashioned notion of architecture as an art form that elevates whatever it engages—whether an historic artifact, a culture of tea, or a real-estate deal. 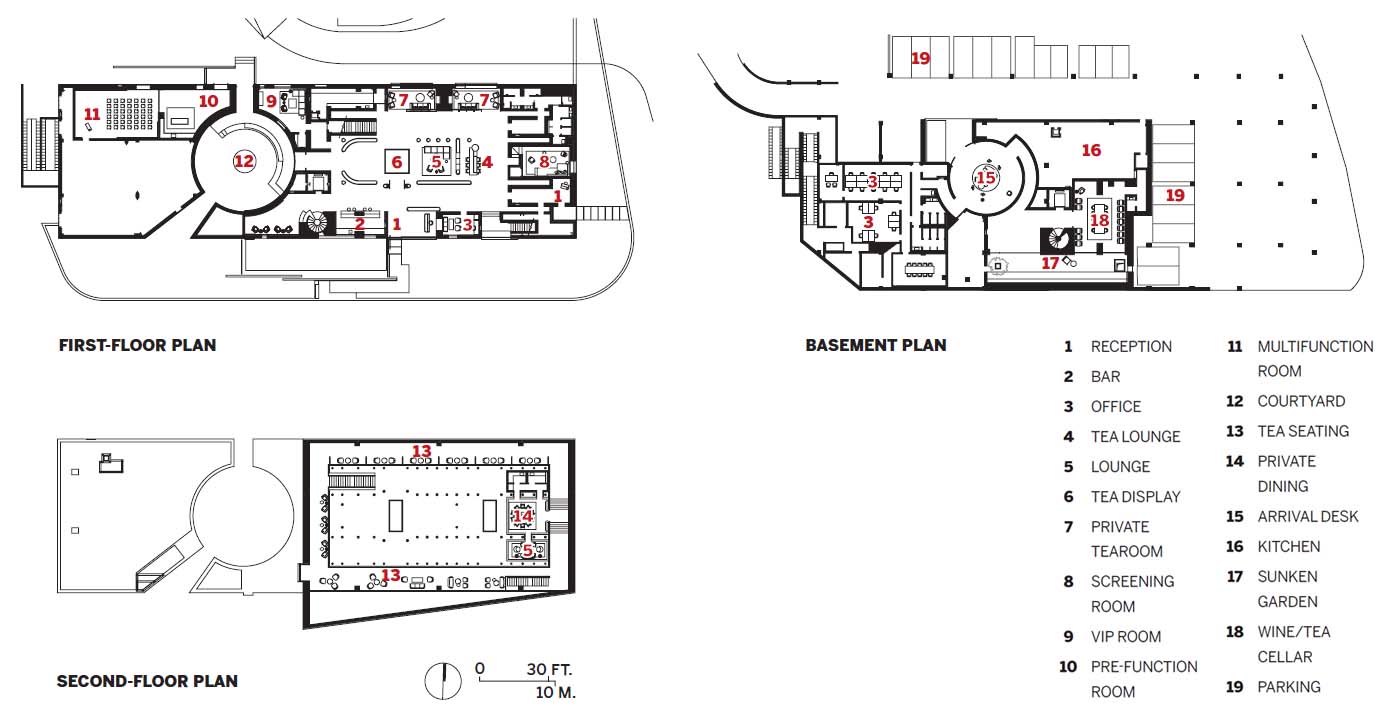