Texas is one of those places where it’s still possible to have land, lots of land, close by a major city. Such is the case with Springwoods Village, once a 2,000-acre forested property on the northern edge of Houston, now being transformed into a mixed-use community, including office, residential, retail, recreation, and greenspace. And the developer, CDC Houston, has added a natural water-management system to its agenda. While the parent company, Coventry Development Corporation, had acquired the land in the 1960s, it wasn’t until after 2000, when ExxonMobil bought 400 acres of the property for its main North American campus, and a beltway (Grand Parkway) was constructed around much of Houston’s outskirts, that Springwoods Village took shape. In 2010, CDC embarked on a master plan to develop a $10 billion project on the remaining 1,600 acres, with 4,000 to 5,000 houses and apartments projected to be built within commuting distance of downtown Houston, 25 miles away. 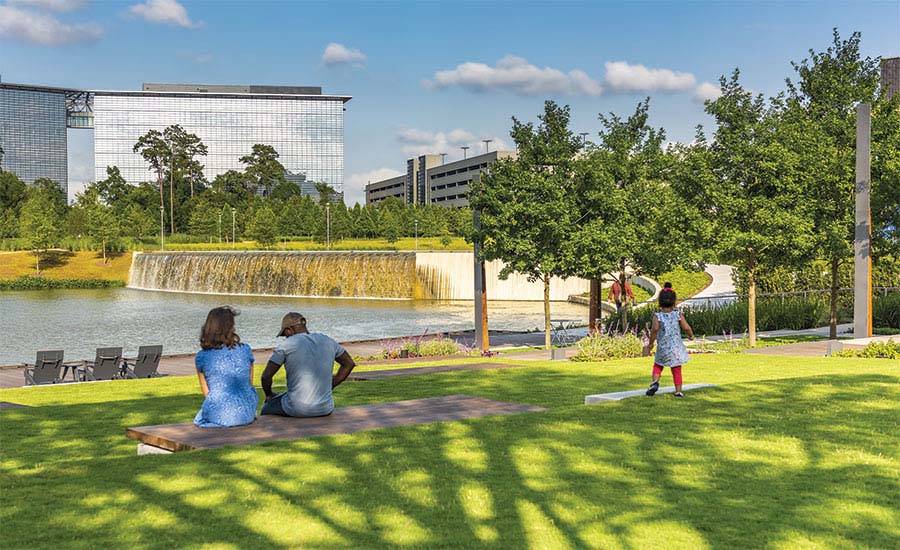 A waterfall attracts visitors in CityPlace’s plaza, where the elevation drops naturally, descending gradually to the man-made pool of the drainage system. Image by G. Lyon Photography, click to enlarge.

One significant aspect of Springwoods Village is the inclusion of large swaths of landscape. In a recently completed area in the eastern portion of the development, CDC commissioned OJB Landscape Architecture to design and construct a landscape component, finished in 2016, that provides recreational features and aids in stormwater management. The 32-acre CityPlace Park is composed of waterfalls, bridges, and trails, with ipé boardwalks threading through a landscape planted with buffalo grass, prairie wildrye, and Texas cupgrass, as well as cypress, water oak trees, and loblolly pines. Included within this park is an entity given the evocative name of Drainage Corridor-1 (DC-1) and composed of a string of eight man-made ponds to mitigate flooding. “We wanted to make sure our stormwater-management system would be seen as an amenity, so we combined it with the large park,” says Warren Wilson, executive vice president of Coventry Development. To its credit, the drainage corridor not only does a lot of invisible work during extreme weather “events” but looks as if it has always been there. 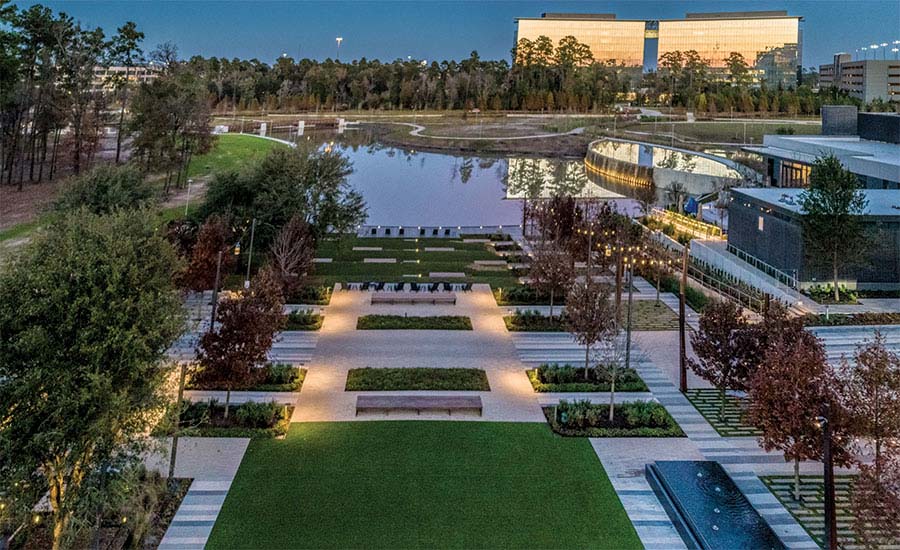 CityPlace is a residential, office, and hotel enclave organized around a linear plaza. Image Courtesy Slyworks

Contrasting with CityPlace Park, which comprises DC-1, is a second component, the urbane 60-acre enclave called CityPlace, whose infrastructure was finished in 2019. Here a mix of office buildings, hotels, multi-family residences, retail shops and restaurants are open or in construction, organized around a large linear plaza that gradually descends east to meet DC-1 and its lush environs.

While Houston-based OJB was in charge of all the landscape design, as well as the master plan for the drainage corridor and park, the firm worked with Gensler on CityPlace’s overall master plan. This component features a grid of 250-by-400-foot blocks and the stretched-out plaza, softened by vegetation. Grass energetically sprouts up in the 7-inch joints between limestone pavers. Along with rectangular stainless-steel fountains, the pavers reinforce a rational design scheme—its artificial character contrasting nicely with the biomorphic park. 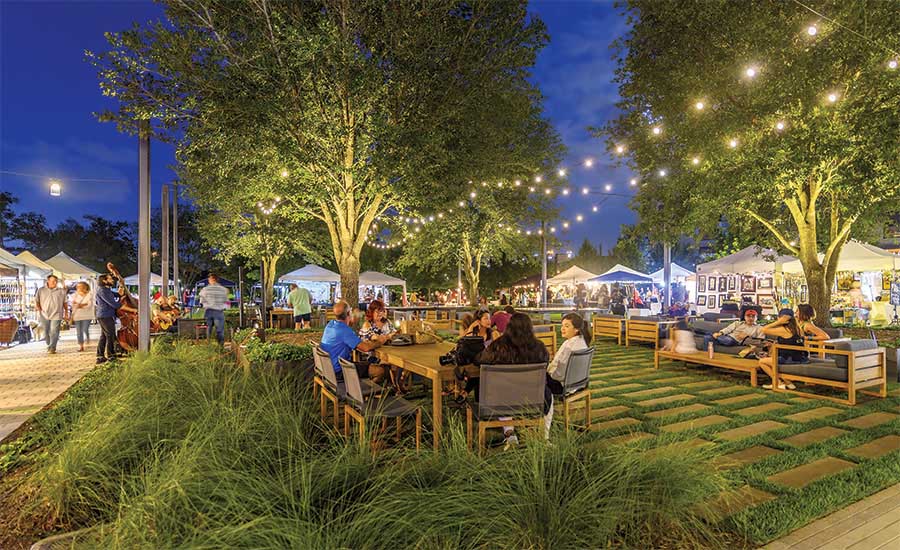 The plaza features plantings of local species along with seating, and tents put up for various festivities. Image by G. Lyon Photography

Yet the most important element of this two-part complex is the infrastructure of the drainage system, especially since its purpose is hidden and designed to look natural. CDC was crucially aware of the need to have strong stormwater management: the region is famous for its flatness and flooding, and climate change means not only a warmer but also a wetter future. While the developer had initially cleared land for Springwoods Village’s unfolding, the company wisely embarked on a green initiative that includes planting over 2,200 trees in CityPlace Park and CityPlace as part of a reforestation effort.

Springwoods Village as a whole complies with county requirements for low-impact development and green infrastructure practices, but also benefits from a designation as an improvement district, which enables the county to collect property taxes to construct and operate the infrastructure for storm drainage, wastewater treatment, and water supply.

The timing was crucial. DC-1 and CityPlace Park were already in place when Hurricane Harvey hit in 2018, so the area impressively survived 30 inches of rainfall that spilled down in four days—FEMA called it the largest amount of rainwater from a single storm documented in the U.S.—without serious flooding of the development’s businesses and homes.

In addition to DC-1, four more drainage corridors serve the entire Springwoods Village area. When flooding occurs, corridors detain the water and gradually discharge the overflow into Spring Creek, which runs into the man-made Lake Houston. “We wanted to avoid putting water into pipes,” says Chip Trageser, OJB’s design lead on DC-1. “We just needed to slow it and let it gradually drain into Spring Creek.” 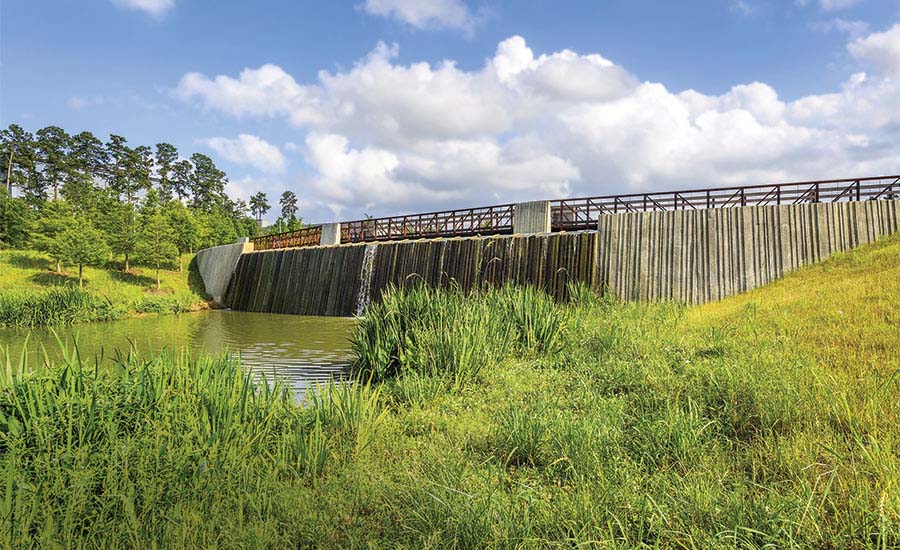 The weir structures (above) mark the drop in elevation between the ponds, generating waterfalls, while storm overflow is drained into Spring Creek. Image Courtesy G. Lyon Photography

DC-1 is the most dramatic piece of the stormwater-infrastructure system in the Springwoods Village development. Its ponds altogether hold about 50 million gallons of water normally, but can accommodate 126 million gallons during a storm. This system also decontaminates, desilts, and moves treated effluent from the drainage area to Spring Creek. And the ponds and weirs do welcome the occasional kayaker.

As part of the decontamination effort, the landscape architects installed aquatic plants that take out impurities such as fertilizers and help prevent algae growth. Shrubs, native grasses, and wild flowers planted between impermeable surfaces and the ponds help filter out heavy metals, oils, and other pollutants. And the slowing of the flow of water by the vegetation helps it infiltrate into the ground. 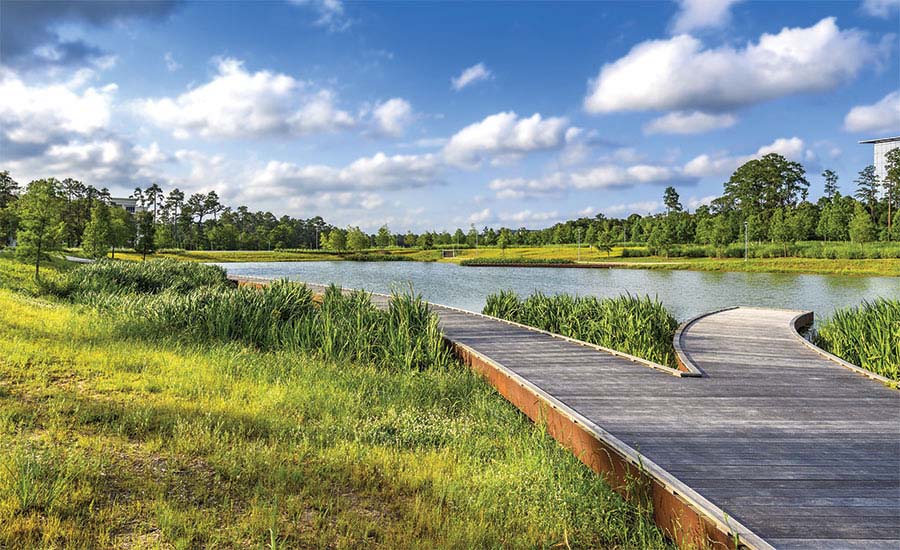 As part of the park, boardwalk and trails take visitors past the ponds. Image by G. Lyon Photography

The vast green acres of the parks and open spaces attract the public from the metropolitan area outside Springwoods, says Wilson, acting as a magnet to outdoor activities. The bridges over ponds and trails invite the experience of “nature,” where visitors can escape the hot, sticky Texas weather: Trageser points out that the tree canopy causes the temperature to drop as much as 10 degrees Fahrenheit. Depending on the season, the wild flowers and native grasses add touches of color and scent.

In CityPlace’s plaza, people like to sit beneath the trees, or explore open-air festivities set up under tents. This is a more social idea of connecting to the outdoors. Yet in both of these two man-made landscapes of Springwoods Village, OJB has given a strong hand to nature with its environmentally sound design. The land may be plentiful, but it does benefit from a judicious intervention. 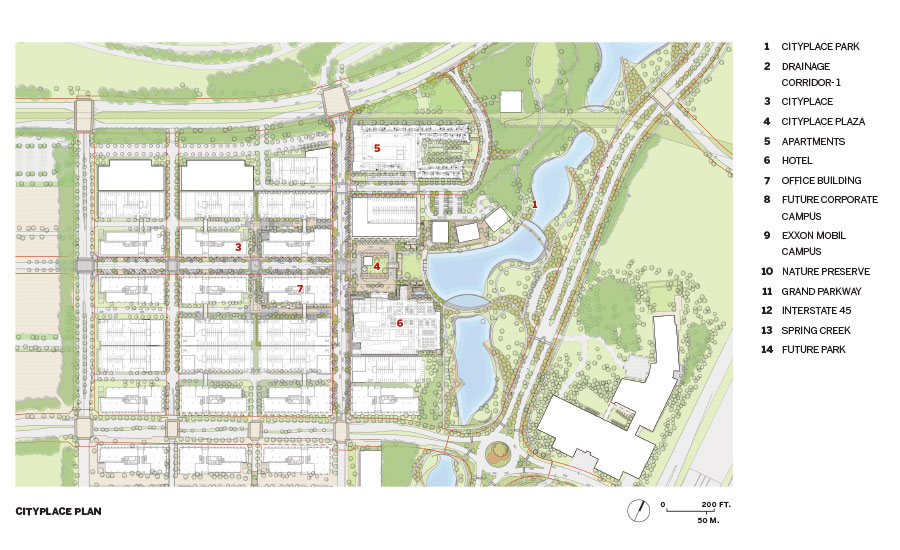 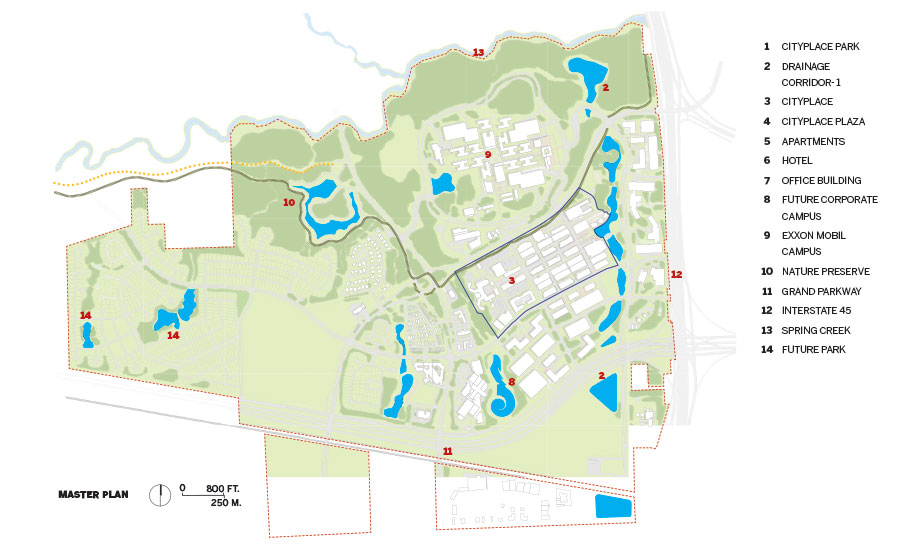 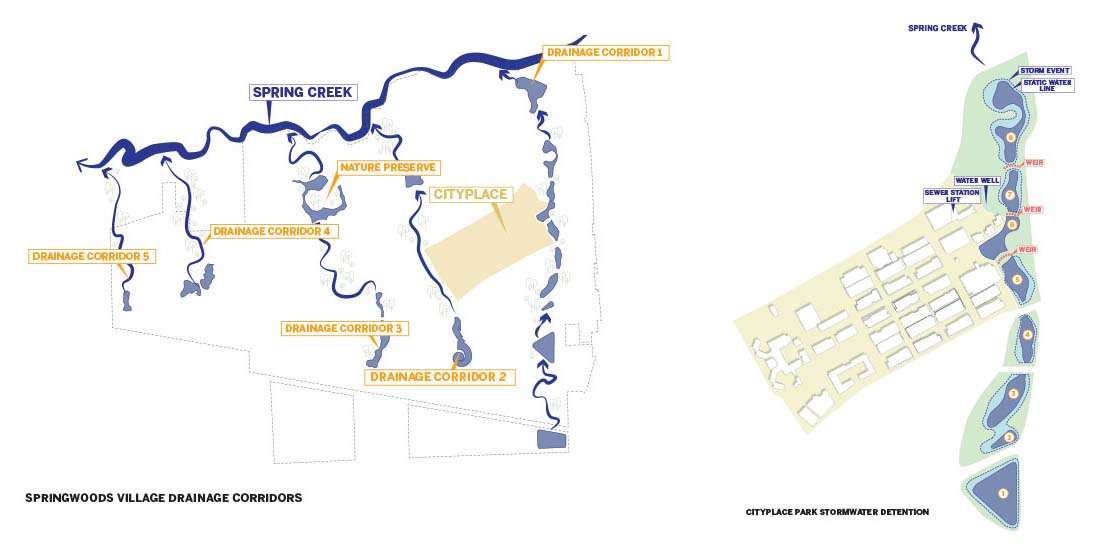 Architect of Record for CityPlace:
Gensler