Like other French luxury brands, Celine has moved the manufacture of its leather goods to the Italian countryside. Skilled craftsmanship still thrives amid the hillside towns and vast vineyards of Tuscany, for example. There—a cradle of couture companies both French and Italian—a number of new production facilities have been built in recent years, including the latest for Celine.

Fabio Barluzzi and Barbara Ponticelli, the husband-and-wife team behind Florence-based MetroOffice Architetti, have created a niche working within the fashion world. After completing an earlier project for Celine in the Chianti region of Tuscany, which included the renovation of two warehouses connected by a bridge, they were invited to compete for the design of a much larger commission, a new 47,000-square-foot building to house 250 artisans and office workers. 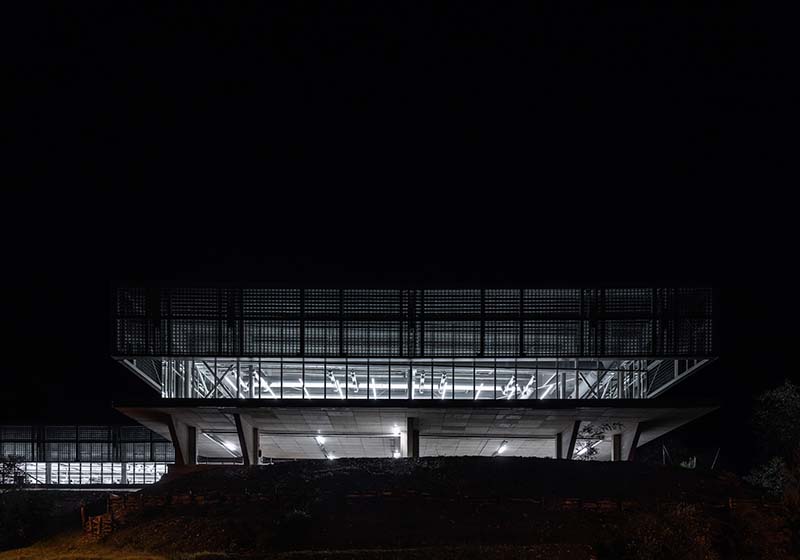 Seen from the main road (top), an overhanging volume accommodating the production area is wrapped in glass block that, at night (above), filters the interior light to the outside. Photo © Marco Cappelletti, click to enlarge.

The company spent three years finding just the right spot—not too close to other factories producing similar goods—in Radda in Chianti, a small town about 20 miles southeast of Florence. In that time, MetroOffice secured the job to design a structure, called “La Manufacture” by Celine, that would replace a long-abandoned, and slightly larger, warehouse on the site.

“Our task was to transfer the identity of the brand to the production facility,” says Barluzzi—a straightforward exercise in someone else’s hands, but MetroOffice took a nuanced approach. The resulting building, like the company’s edgy clothes and accessories, is a sleek-meets-classic concoction, eschewing glamour for industrial chic. “We wanted to recover something that was there before,” explains Ponticelli, referring to the earlier shed that was demolished. 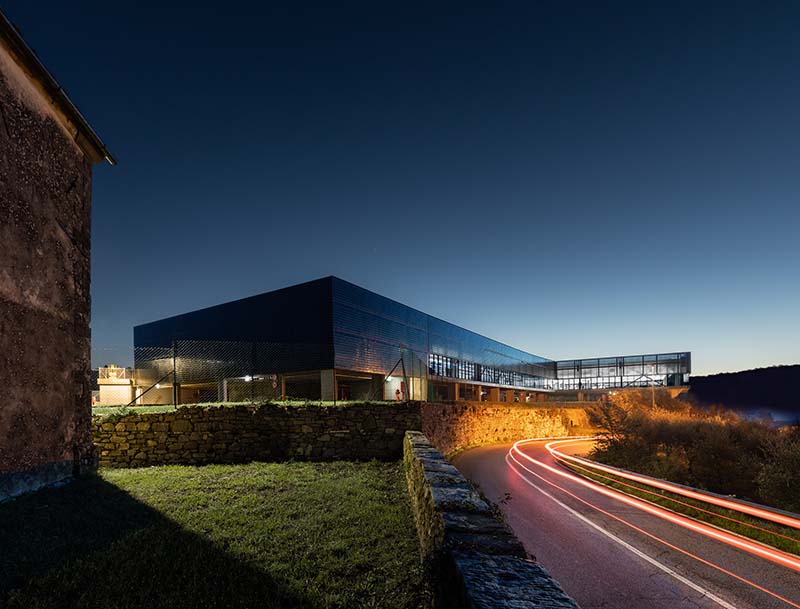 The crystalline L-shaped building is nestled in the countryside. The ground level features an open parking area. Photo © Marco Cappelletti

The couple also jokes that they were often reminded by the client, “It’s not a museum, it’s a factory.” They took inspiration from the old manufacturing and storage buildings of the area, combining two of the common components of those, brick and large windows, into the signature element of their structure—glass block. The east, west, and south facades of the new L-shaped building are covered in 33,000 such blocks.

The swaths of gray glass block are suspended over the upper half of the three-story building, several feet in front of the clear glass curtain wall, and several feet above the floor level of the main production area, opening up unobstructed views of the surrounding countryside while providing filtered sunlight throughout the 18-foot-high work zone. (The ground level mainly comprises an open parking area and employee changing rooms.) 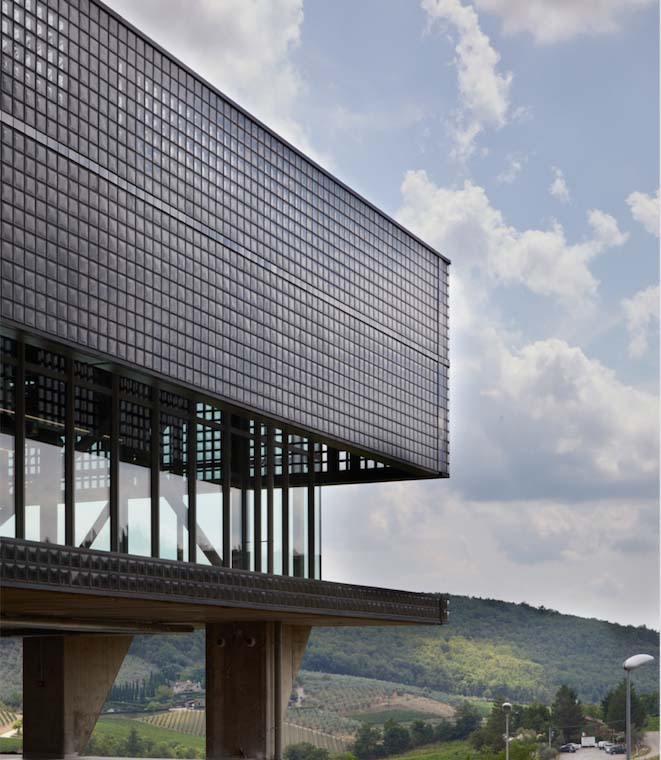 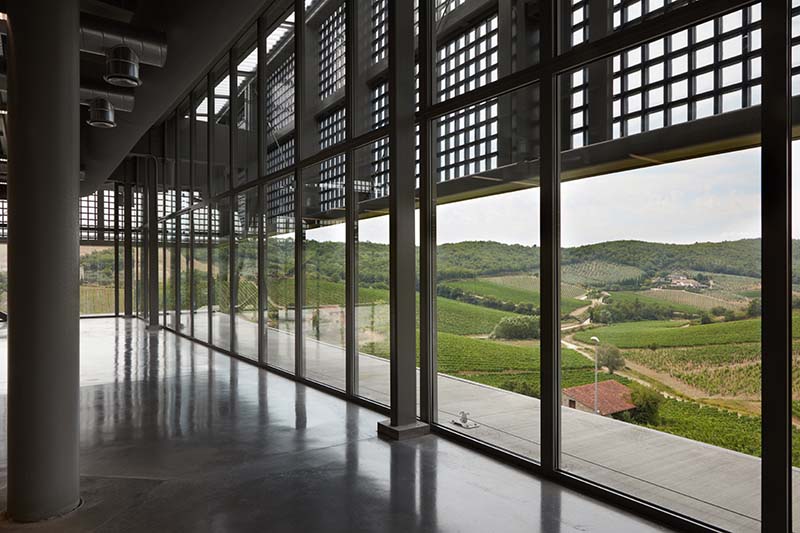 The glass block, supported by a grid of metal rods, is suspended several feet in front of the clear glass curtain wall, producing a double facade Photos © Margherita Caldi Inchingolo

The architects made several visits to Spain, where the glass blocks were manufactured, reviewing countless samples before arriving at ones with just the right curvature and tint, based on the solar modeling MetroOffice conducted. “This is the largest glass-block facade that facility has produced,” Barluzzi says.

Though the structure is rather uncomplicated—poured concrete slabs, steel columns, composite-wood roof beams topped by a metal roof and 4,300-square-feet of solar panels—the installation of the individual glass blocks that were shipped to the site, much like the fashioning of an intricate leather bag, required a rare kind of skilled labor. “They were mounted by hand almost entirely by one man,” recalls Barluzzi. The blocks are arrayed in a grid, separated by ¾-inch mortar joints and supported by a combination of wood and metal rods to form large panels. “The technology is simple, but the aesthetic is just what we were looking for.” 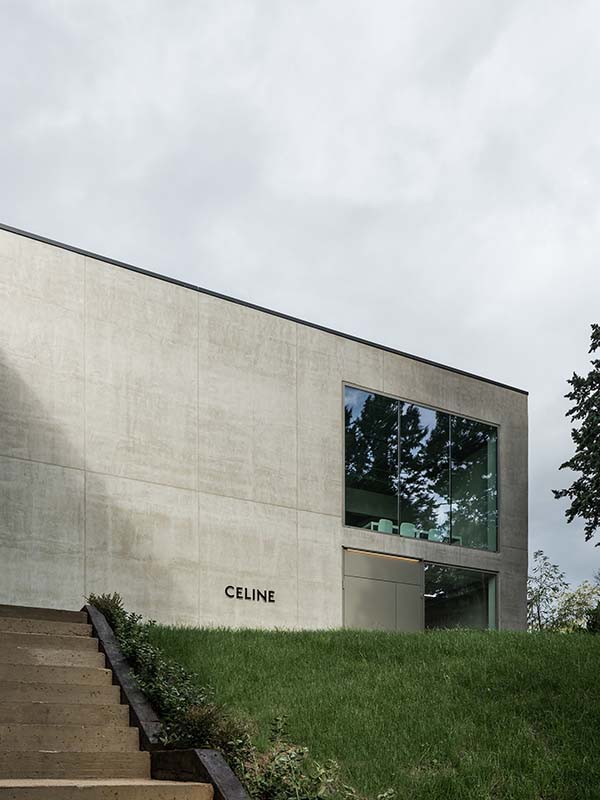 The double facade also offers an old-fashioned way of naturally heating and cooling the building for most of the year, allowing air to rise through its gap into openings within the operable portion of the curtain wall. “They only needed to turn on the heat seven times last winter,” Barluzzi points out of the passive system in combination with other sustainable strategies. “It was a bit of a gamble, since we had never done anything like that before, but thankfully it worked out.”

The industrial aesthetic is carried over to the interiors, where concrete floors are polished and exposed, and colors and finishes are kept to a minimum, letting the large machinery used for cutting and sewing leather take center stage. As in most workplaces in Italy, a generous dining area is part of the work culture, and here, on the north side of the building where concrete and clear glass make up the facade, the cafeteria has expansive views to the lush green landscape beyond. 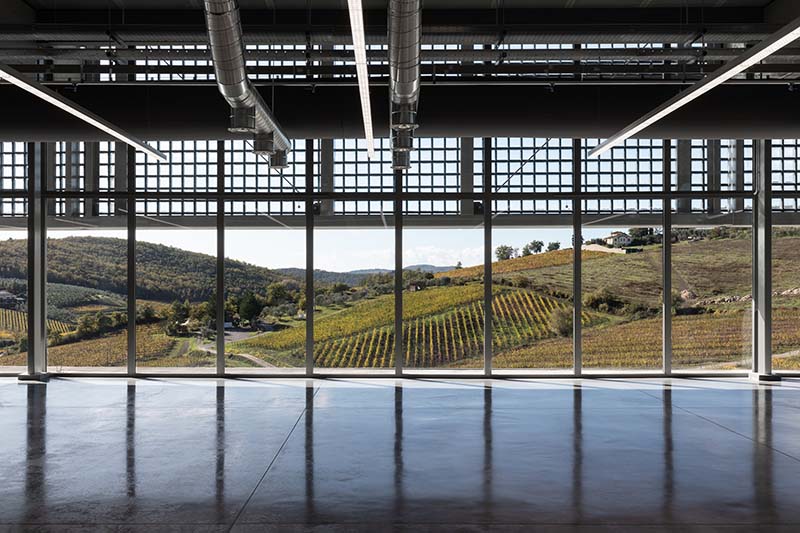 Workers in the production area have unobstructed views over the Tuscan landscape. Photo © Marco Cappelletti

The open floor plan of the L-shaped production area also gives each of the workers astonishing vistas in multiple directions over the terraced vineyards for which Chianti is famous. According to Ponticelli, “We wanted to create a seamless connection with nature and the unique surroundings.” The factory, which only opened late last year, had slowly been building up to capacity when Italy was hit hard by the coronavirus in March. After a month-and-a-half-long shutdown, it has slowly resumed production of those coveted leather bags and accessories with more than enough socially distant space for the 130 workers currently on-site.

As most companies rethink the workplace in the wake of Covid-19, La Manufacture offers a few simple lessons for making great employee spaces—high-quality craftsmanship, natural light and ventilation, and unobstructed views. A hillside location in Tuscany also helps. 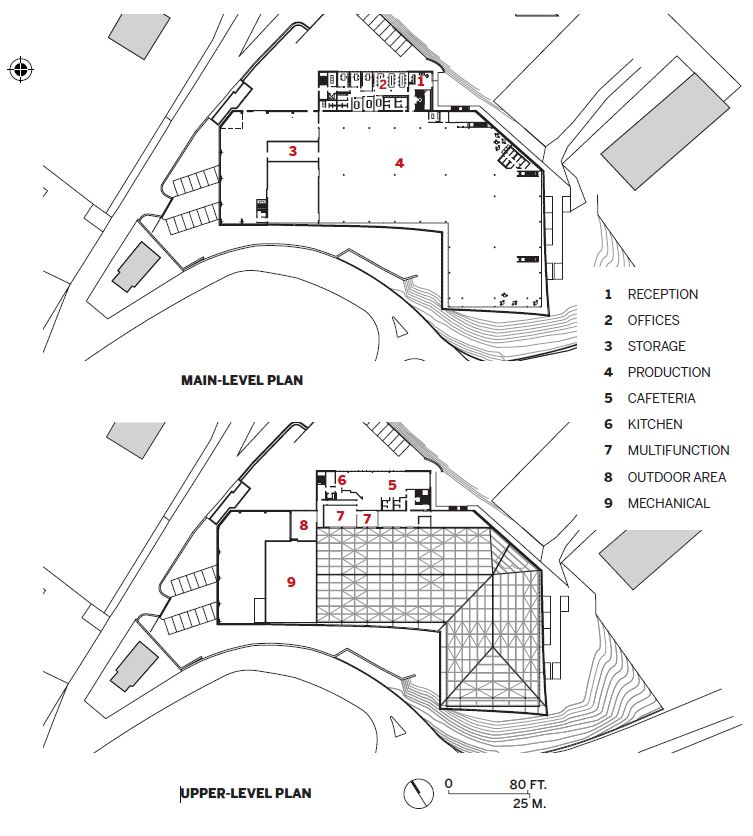