The Edge by Dub Architects

In a commercial market, you don’t usually think a developer of a spec office building will value design quality over the most expedient solution. But it can happen. In the case of a 10-story high-rise in Edmonton, Alberta, Gene Dub, principal of Dub Architects, owns the development company—Five Oaks—that constructed it in accord with his firm’s design. The skinny, 52,000-square-foot tower, which sits on a narrow 50-by-150-foot site in downtown, displays an elegance in its proportion and detail, yet the glass-and-concrete structure is economical—costing barely over $11 million (U.S.)—and ultra-sustainable, with reputedly one of the largest solar-paneled vertical walls in Canada. 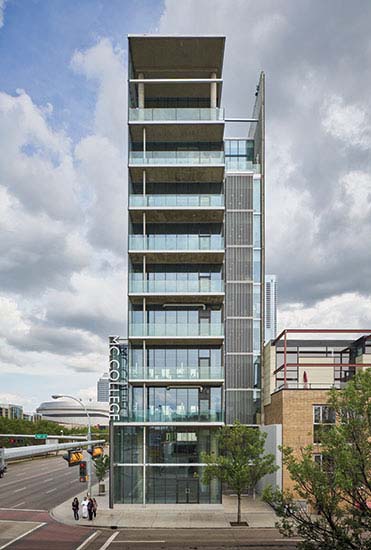 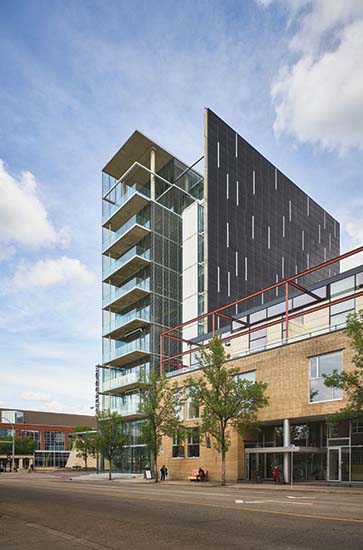 The narrow entrance facade is on the west, 50-foot-wide end of the corner site (1). It is flanked on the south by a wall of solar panels that rise above a four-story building next door (2) renovated previously by Dub. Photos © Doublespace, click to enlarge.

While Dub and Five Oaks were building the Edge, as they call it, the architects received a separate commission for a new facility for MC College, a school that trains hairdressers, fashion designers, and beauty specialists. But as MC (once known as Marvel College) saw the Edge going up, the institution decided that was the place to be. A corner lot and the lean profile of the tower lent the school a visibility for its varied programs, which include offering inexpensive haircuts by student clippers to the outside world. Since MC only needed eight floors, it bought the building and leased back the top two floors to Dub Architects, who had decided to move in.

Dub took advantage of the low height of a warehouse next door to install solar panels on the south wall of the new building’s upper floors.The 560 photovoltaic panels, which feed into the city’s electrical power grid, provide 80 percent of the electrical load for the building. To avoid the visual monotony of a dark wall clad with conventional solar panels, the architects organized the PVs in a random pattern interspersed with slivers of aluminum. While the vertical solar wall is not tilted at the usual 50-degree angle and may look less efficient for gathering the sun’s rays, Gene Dub points out that its perpendicular position has the advantage of being self-cleaning by way of precipitation. 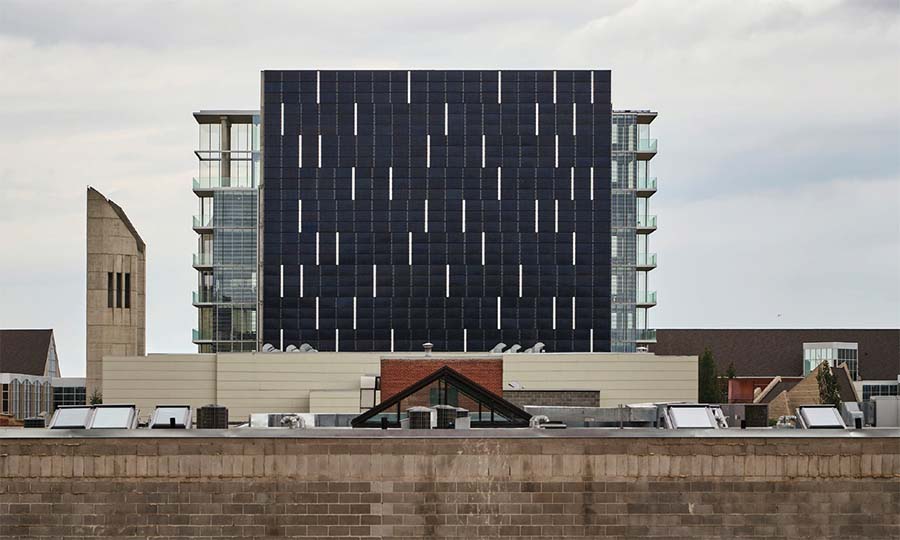 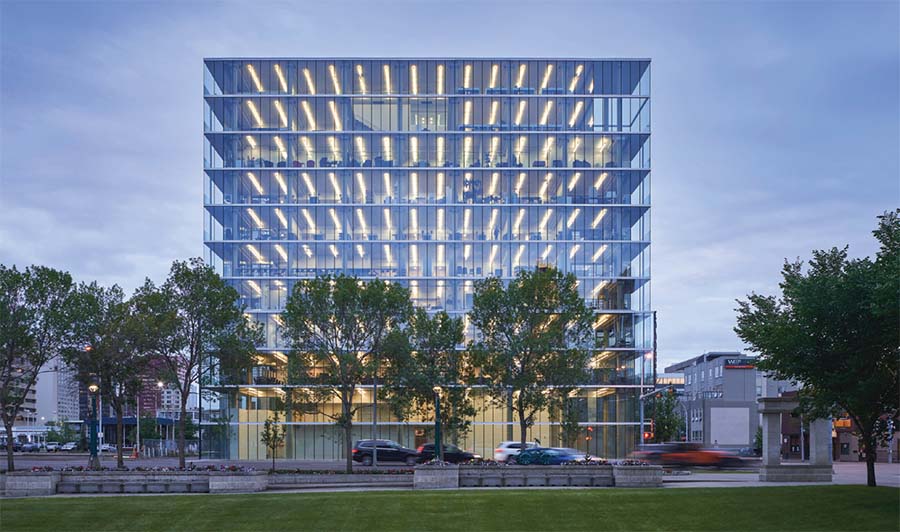 THE SOUTH-FACING PV-paneled wall (3) and and the north-facing glass expanse (4) present two different aspects of the sliver-like building. Photos © Doublespace.

Since Dub had previously remodeled this adjoining 1950s brick warehouse for work/live lofts for apartments, with two floors added on top, some of its architectural vocabulary relates well to the new structure. Specifically, the proportion and linearity of the steel framing elements, Dub says, influenced the architectural treatment of the larger tower next door. This connection shows most dramatically on the west end, where the entrance facade bears the sign of the school. Here the architects emphasized its narrow width by means of vertical aluminum grilled louvers and drainpipes that give the elevation an attenuated linearity reminiscent of Howe and Lescaze’s unbuilt-sky scraper designs for New York’s Museum of Modern Art (1931–33). 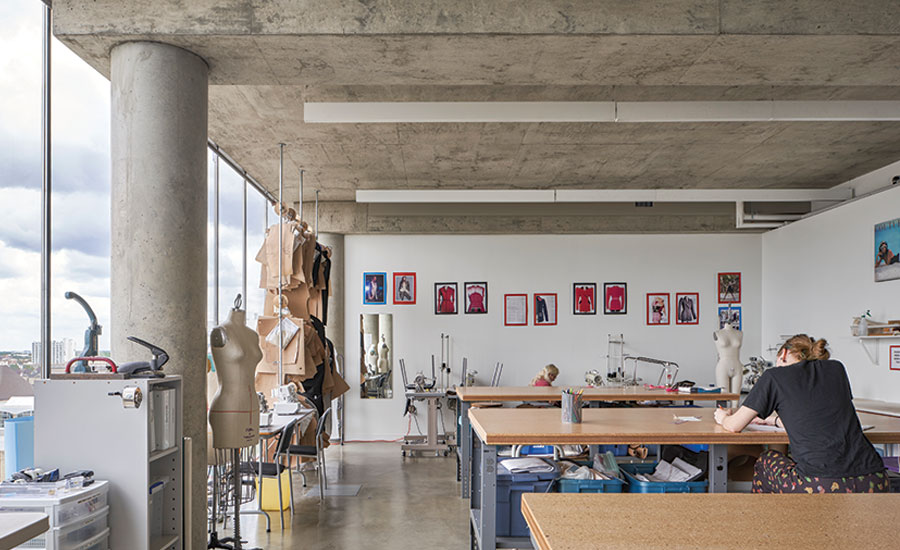 While the architects have recessed the glass walls behind balconies on both the west and east ends, they pushed out the shimmering, planar glass expanse on the north face to the edge of the building envelope. Here it presents a strong luminous face to the city and allows ample daylight to permeate the shallow open-plan interiors of the concrete column-and-deck structure. 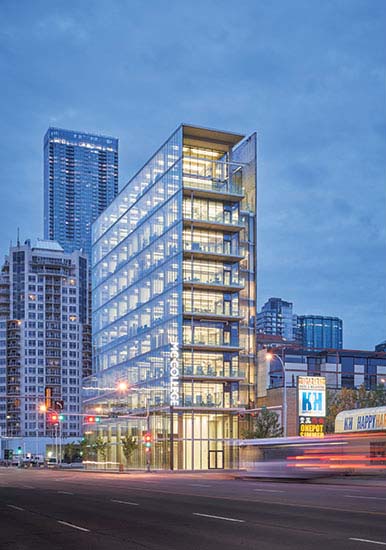 On the north face of the Edge, glass is pushed to the building envelope (left) but recessed behind balconies on the west and east ends. At night, the illuminated concrete column-and-deck structure acts as a beacon for the school. Photo © Doublespace

Visitors arriving at the entrance find a spacious ground-floor lobby, 23 feet high, which accommodates school events, student exhibitions, and sales of student fashion work. A mezzanine overlooking the area is connected by an evanescent cable-supported stair with steel treads. On the top two floors, Dub carved out an atrium within his office’s duplex and connected the floors by another airy cable-supported, open-riser stair.

To amplify the sense of space throughout, the architects exposed the ceilings, leaving a 12-foot floor-to-floor height, and then placed heating and cooling ducts on the edges of the concrete beams. Because of the cold, often subzero winters, they used both insulated triple and quadruple glazing, butt-jointed to cut down on heat loss, and designed the balconies with thermal breaks. Used as outdoor meeting rooms in warm weather, these perches on the two ends of the building mean that doors can be opened to permit fresh air to flow through the entire floor. 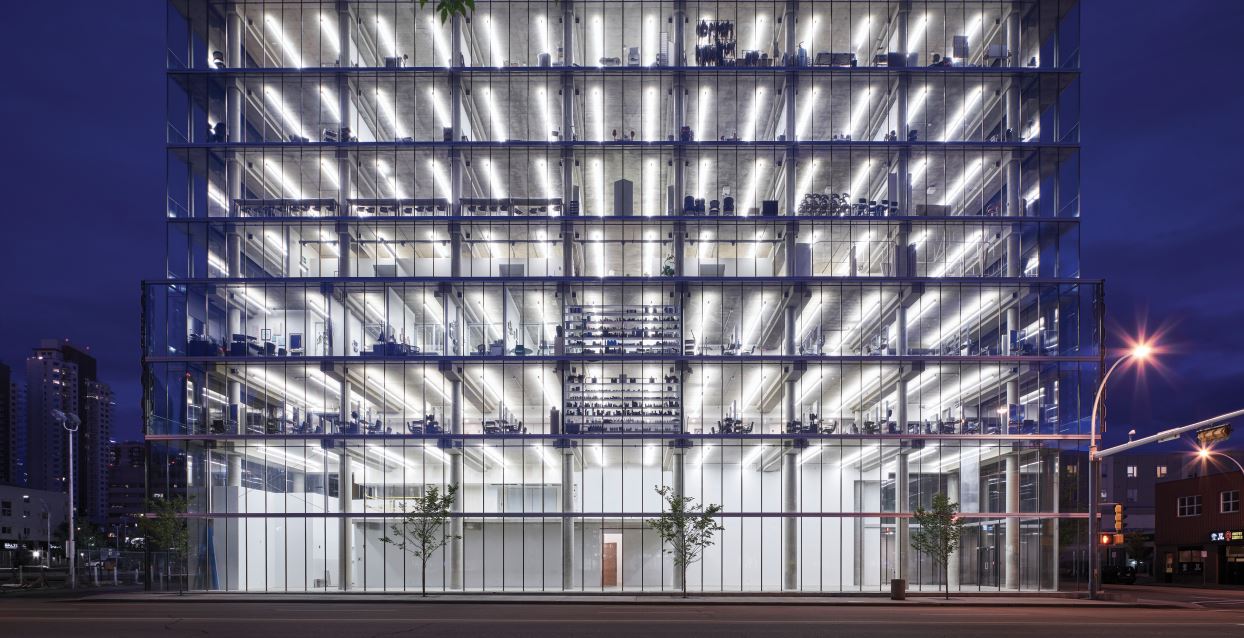 Not surprisingly, the Covid-19 pandemic has required certain changes in the school’s program: MC cut its enrollment from 250 to 120 students this fall, and elevators carry no more than two persons at a time. Some of the plumbing for beauty treatments was altered, but most modifications are minimal. Already each floor had its own HVAC system, and the sense of space and light prevails, along with the ability to social-distance in an open plan subdivided by modular wall systems.

From the vantage point on top, Dub says, “we have been surprised to be here and watch the weather change during the day.” Since founding his firm in 1975, Dub has often worked in historic buildings he has renovated. So this is a bit different, and it’s also convenient, since the commute is short: Dub lives in one of the apartments next door, which are joined to the tower by underground parking. While it is no doubt ironic that the “reward” for designing a spec building so well was losing the commission to design a separate building for the school, both parties seem to be quite happy with the result.