In 2015, soon after winning the bid to develop 8.4 desolate acres of city-owned land in the once-grand Detroit neighborhood of Brush Park, the developer Bedrock began a national search for architects to transform the site—vacant except for four abandoned redbrick Victorian mansions—into a vibrant mixed-income, mixed-use community. Bedrock was looking to showcase small firms with experience in infill housing. “But we didn’t want to duplicate projects from a different part of the country,” says Melissa Dittmer, the company’s chief design officer. “We wanted to interpret the neighborhood’s urban fabric and its history into modern form.” 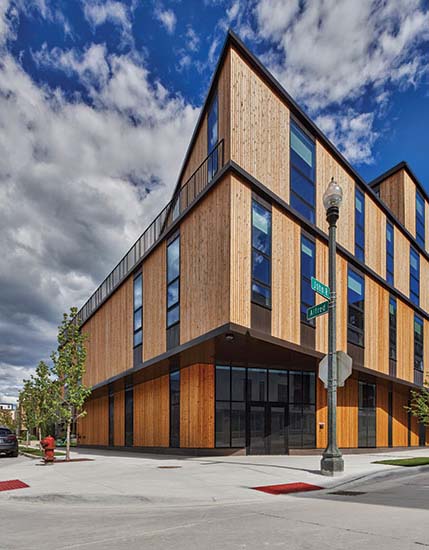 The new apartment building designed by LOHA for City Modern, and the four others planned by the firm, sit on prominent corner sites. Photo © Jason Keen, click to enlarge.

One of five architects Bedrock selected for the development, called City Modern, was Lorcan O’Herlihy Architects (LOHA), a Los Angeles firm known for its imaginative handling of LA’s multifamily typology. LOHA’s portfolio includes the 32-unit Mariposa1038, with bowed facades and a dramatic elliptical void at its center, and Cloverdale749, a 6-unit building inventively sheathed in corrugated and perforated metal panels. For City Modern, Bedrock gave LOHA the plum job of designing four residential buildings for the plot’s prominent corner lots. Each of these five- and six-story “anchors,” as the firm’s principal, Lorcan O’Herlihy, refers to them, has different massing and a distinct cladding material—including black brick, red metal, and fiber cement panels. Tenants have begun moving in to the first LOHA-designed project to be completed. Wrapped in tongue-and-groove cedar panels, its four wood-framed levels on top of a poured-in-place concrete podium enclose 35 market-rate apartments and a ground-floor retail space. 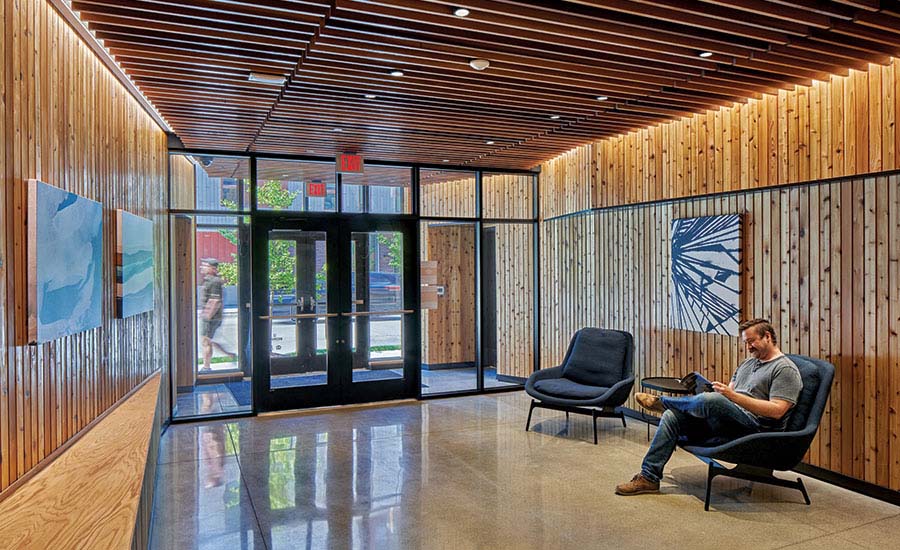 The cedar cladding extends into the lobby. Photo © Jason Keen

City Modern is said to be Detroit’s largest multiunit housing development since Mies van der Rohe’s Lafayette Park was built in the middle of the last century. Eventually it will comprise 410 residential units in apartment buildings, townhouses, duplexes, and the renovated Victorian mansions, including rentals, of which 20 percent will be designated as affordable, and condos. In addition to LOHA, the complex’s designers are Boston-based Merge, Studio Dwell of Chicago, and the local firms Hamilton Anderson Associates (HAA) and Christian Hurttienne. The new neighborhood, about one mile from downtown, is emerging in a part of Detroit that was once known as the “little Paris of the Midwest” for its elegant mansions built largely in the late 1800s. But Brush Park began to decline in the early 20th century, when streetcars and automobiles allowed its well-heeled residents to live farther from the city’s center.

The development rising now, slated for completion in 2022, is organized under a master plan and form-based guidelines created by HAA. (The firm also has designed two apartment buildings for the complex.) Those plans establish the outlines of the dense but low-rise neighborhood, with criteria for building heights, setbacks, and materials, among other details, and designating streets, alleyways, and a string of pocket parks. The aim, says Mark Farlow, HAA principal of design, is to create a neighborhood with the richness of one that has evolved over time but that is distinctly of the present. The master plan and guidelines “set the limits of the sandbox within which each architect would operate,” he adds. 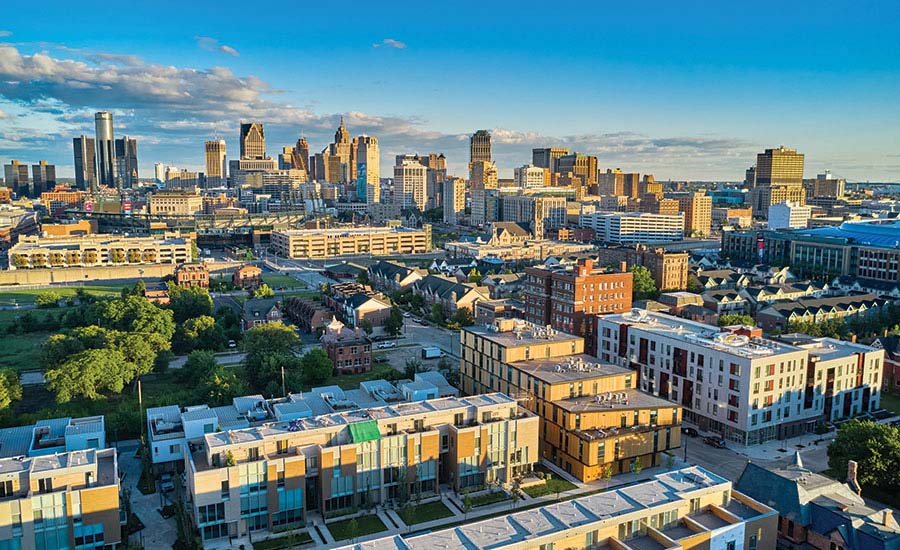 City Modern (foreground) is only about one mile from downtown Detroit. Photo © Jason Keen

The selected architects describe the design process as highly collaborative, with the project teams regularly gathering virtually and meeting in person monthly in Detroit to align their schemes. O’Herlihy says his firm’s just-completed building was shaped by this dialogue and by its neighbors. The roughly rectangular volume outlined for him by the master plan was carved so that it steps down from five stories at one end to two at the other, to be compatible with the scale of the future adjacent townhouses and, in particular, with the historic mansion across the street. “We didn’t want to turn our back on it,” he says. 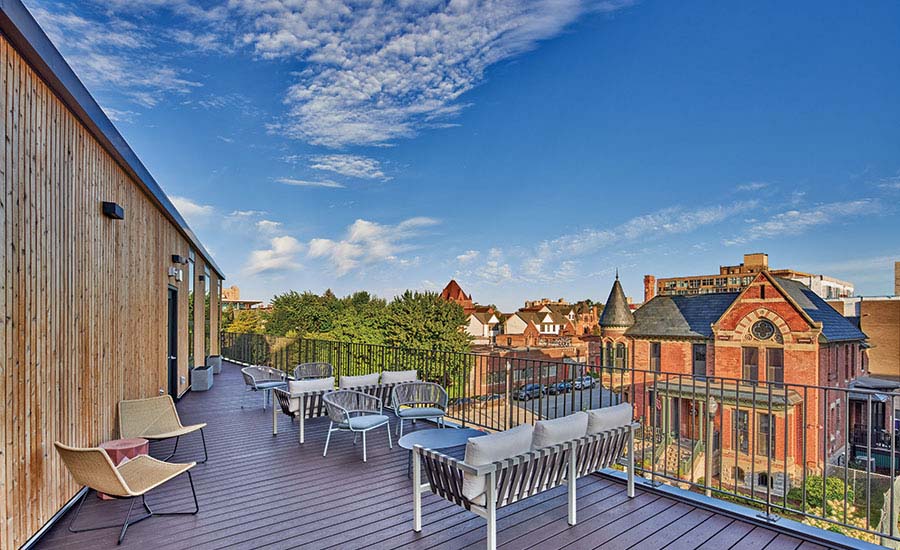 The multiple flat roof areas that resulted from this stepping, combined with further sculpting of the building’s volume, also provided for angled terraces in the early design process. But over the course of the project’s evolution, due to budget constraints, the angles grew more regular and the roof areas smaller, in favor of creating more apartments. “The scheme became more developer-friendly,” says Dittmer. For now, only the roof at the third floor is a terrace—but one open to all the building’s tenants. Despite these changes, LOHA has maintained a strong architectural expression with exterior details such as horizontal coping in dark metal between floors, which contrasts with the cedar, and a first-floor enclosure with subtle bends and folds. Both serve to accentuate the stepping form and make the building appear to slightly skew. 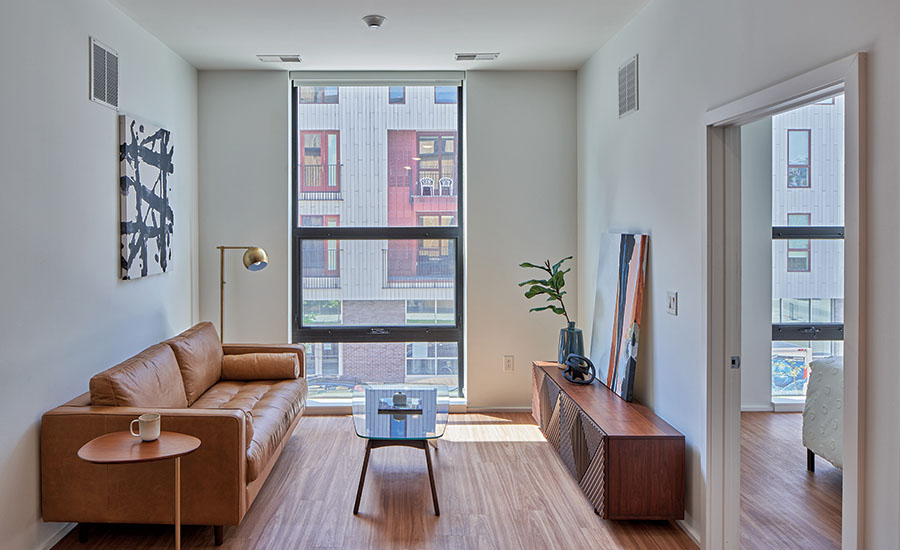 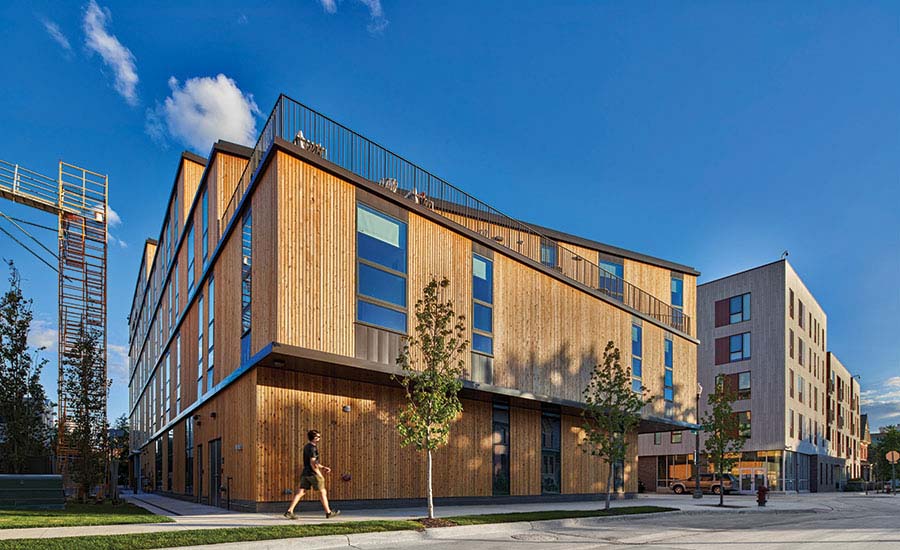 The windows run the full height of the units (1) and appear even taller on the exterior due to the use of spandrel panels (2). Photos © Jason Keen

Inside, the building’s apartments range from studios, renting for $1,200, to two-bedroom/two-bath units starting at $2,300. They have sensible layouts and wood-laminate floors, quartz kitchen countertops, and stainless appliances, and are organized around a central interior corridor—a departure from LOHA’s multifamily projects in LA, where the mild climate allows for outdoor circulation and access to daylight and air from two directions. But O’Herlihy compensates for the necessary double-loaded configuration with windows that extend to the apartments’ full 9-foot 6-inch height. This arrangement allows daylight to wash floors and ceilings, explains O’Herlihy, lending the interiors an unexpected “freshness.”

The appeal of the building’s contemporary form and crisp interiors is clear. Bedrock has rented about 25 percent of its units since the spring—a performance that Dittmer says is strong given that the company paused active leasing efforts due to Covid. Of LOHA’s three remaining buildings, one is nearing completion, while the other two are in the early stages of construction. As a whole, 12 of the 20 ground-up new buildings planned for City Modern are finished, and about 68 percent of those available for rental are leased or occupied. It seems that Bedrock’s vision of a modern, dense urban environment that nods to history has legs, even with the uncertainty surrounding the future of cities post-pandemic. 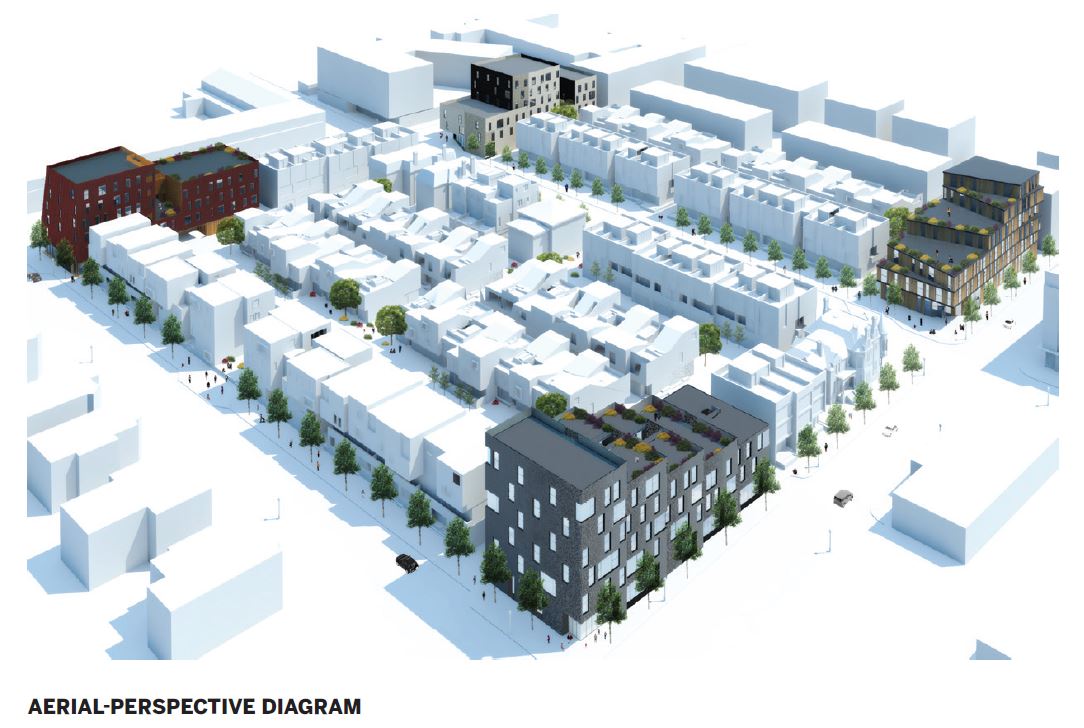 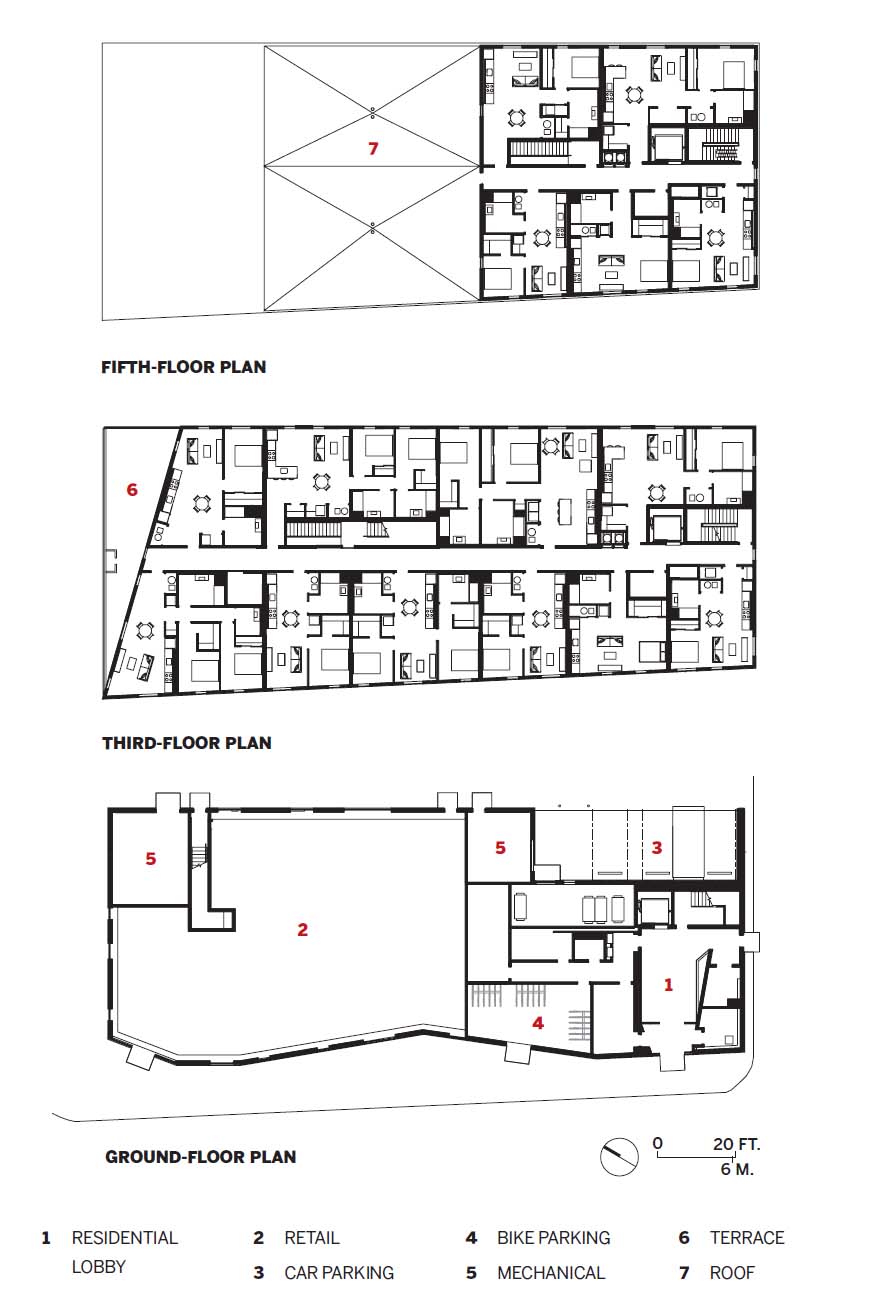