The Continental by Jonathan Segal, FAIA

In the 1920s and ’30s, when San Diego’s Little Italy was known for the gritty fishing fleets and tuna canneries that lined its waterfront, modest studio apartments were not unusual here. But that option largely disappeared as this once-industrial quarter became extremely desirable, full of hip eateries, bars, shops, and increasingly high-end residential structures. “The neighborhood ended up with very few studios, and typically in the worst parts of buildings—crammed in back, at the bottom, with little daylight and no views—but still really expensive,” says architect Matthew Segal, chief of staff at the San Diego firm Jonathan Segal, FAIA. Given those slim pickings and the limited supply of affordable housing, Matthew and his father, firm owner/architect Jonathan Segal, saw the need and opportunity to introduce a whole tower of micro-units, at below-market rents. The Continental, the 8-story building they envisioned and completed last January—with 42 mostly south-facing studios, two commercial storefronts, and a four-story owners’ townhouse—offers abundant sunlight, outdoor space, and distinctive architecture for every tenant. 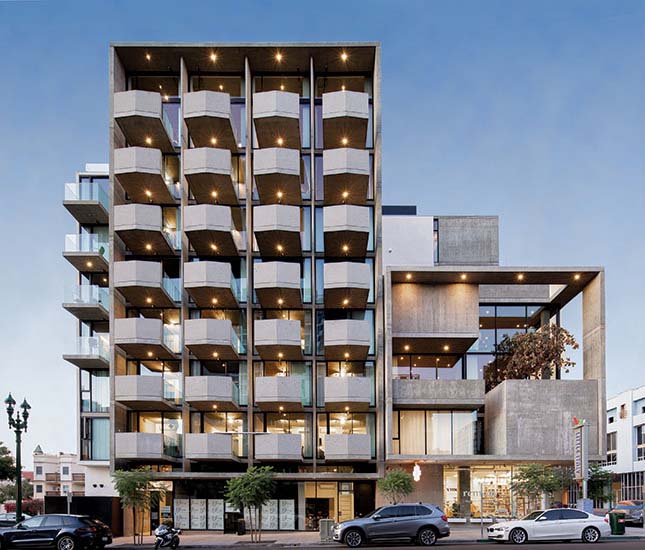 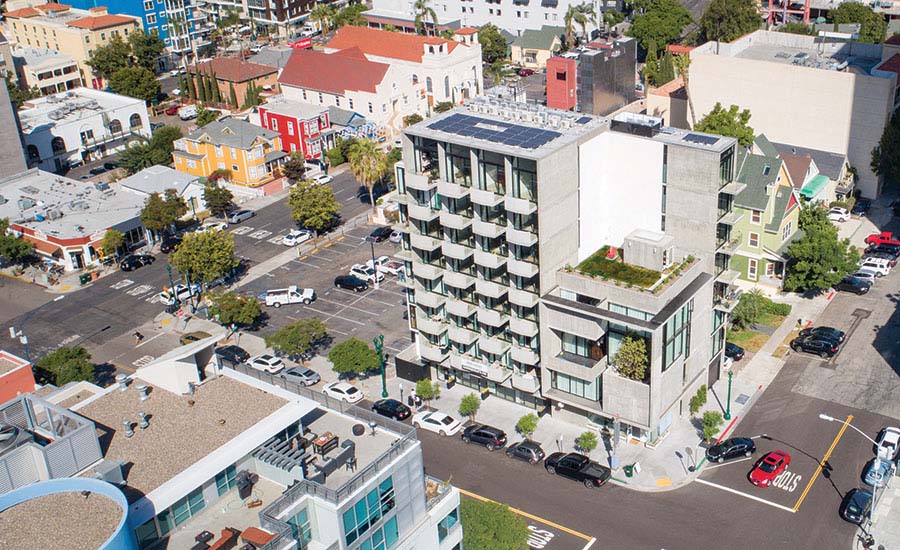 While keeping rents below market, the team offers tenants generous sunlight and outdoor space (1 and 2). An owners’ cubic, four-story townhouse occupies one corner of the site. Photos © Matthew Segal, click to enlarge.

So, how did they achieve that—and keep rents low? The answer lies in the ways this family-owned-and-run architecture-development company has always built and done business, as well as key design decisions and trade-offs about what amenities to exclude, or include, at the Continental.

In a daring move, the team sought to eliminate tenant parking (except for the townhouse component), capitalizing on the neighborhood’s walk score of 98—and banking on people’s willingness to forgo garage space and square footage in order to live in a cool area at relatively modest rents. Dispensing with parking would have required a local planning variance, but community pushback ultimately forced the Segals to carve out 11 underground spots. That added $1 million to the budget (the company declines to disclose the total cost) and increased the intended rents by 10 percent. Nonetheless, the 27,000-square-foot Continental still undercuts Little Italy’s mean studio rents by 10 to 20 percent, with 37 apartments, averaging 395 square feet each, at monthly rates from $1,595 to $1,995. Five of those units are available as steeply discounted state-regulated low-income rentals. Additionally, the Continental has five studio penthouses, priced from $2,195 to $2,995, each with 15-foot 6-inch ceilings, a balcony and bonus loft space, skyline views (and indoor parking). Adjacent to the tower, the townhouse—a cubic form with its own entrance, elevator, and parking—is home to Matthew, the project’s lead designer, and his wife, whose holistic-and-traditional pharmacy occupies the retail space below them. 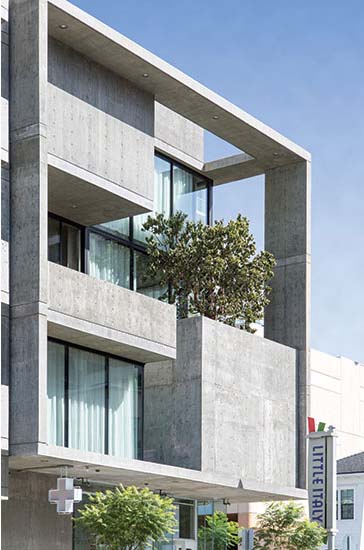 The owners’ townhouse sits above a pharmacy. Photos © Matthew Segal

While minimizing the car’s role, the Continental—like most of the firm’s buildings—takes inspiration from the automotive realm. “Even if we don’t believe you need to drive in this environment,” says Matthew, “we still love the beauty of great design and engineering.” His father owns 15 sports cars, including vintage classics. That sensibility may factor into the allure of their buildings, in this case the name that is borrowed from the Lincoln Continental and its facade composition—rendered as a projecting grid of concrete-faced chevron-patterned balconies—from the grilles of 1958 Buicks and Lincolns.

Exposed concrete, often favored by the Segals, emerges in both exterior and interior walls—cost-effectively giving the studios an industrial-chic aesthetic. The primary structural system is post-tensioned concrete, allowing for relatively thin slabs and long spans. Eliminating interior soffits and chases to economically maximize space and ceiling heights (which rise to 9 feet 3 inches in the ordinary studios), the architects embedded plumbing and electrical lines in the bare slab wherever possible, exposing the pipes and conduits where necessary. 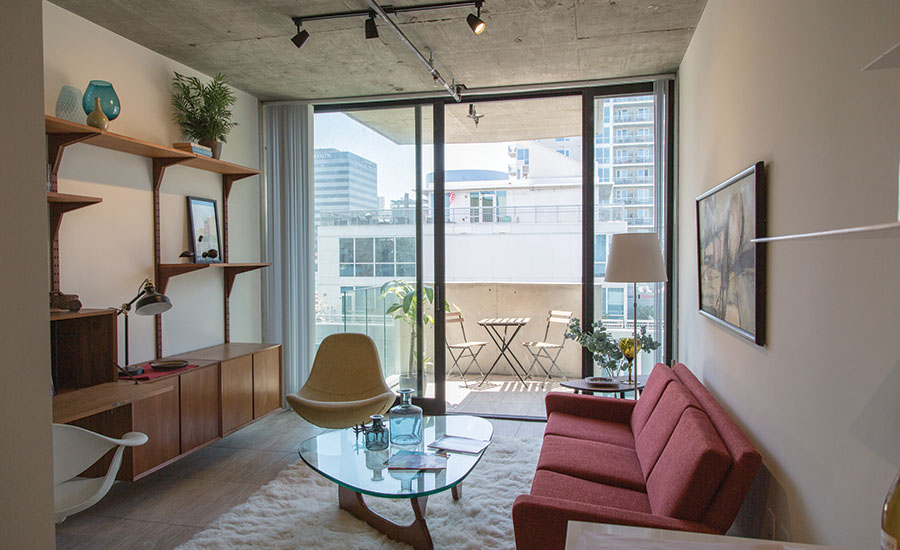 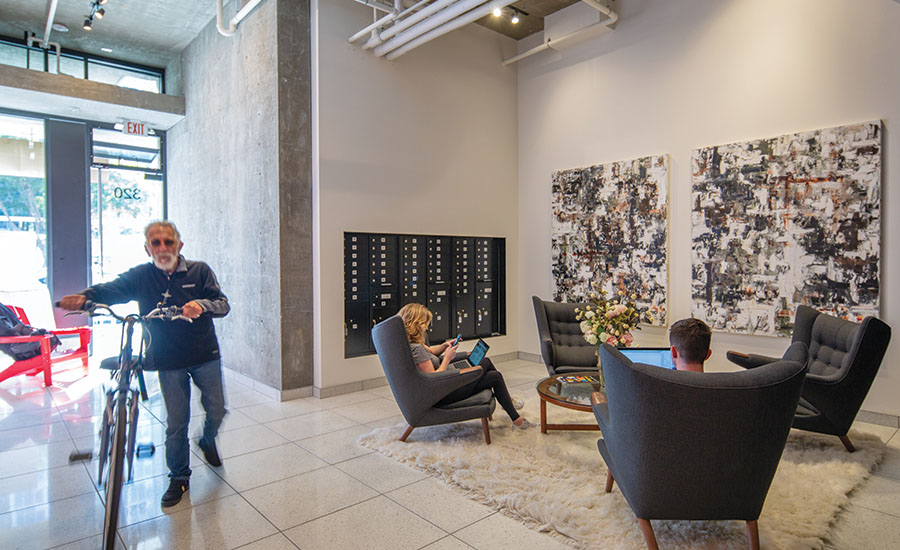 The architects invest in the long term with durable materials, such as exposed concrete and tile in the studios (3) and lobby (4). Photos © Matthew Segal, click to enlarge.

The Segals always design, develop, construct (or adaptively reuse), own, and manage their buildings (this is their 23rd multifamily project in San Diego), allowing them to undercut the market. Their guiding principle is to bypass the conventional architect-owner-contractor triangle, with its inefficiencies, middlemen, and conflicting incentives. They work without general contractors (or realtors to rent out the units), claiming savings for themselves and their tenants. Wearing so many different hats, says Matthew, gives them nimbleness and flexibility “to make decisions and modifications on the fly without racking up costly change orders.” Unlike developers who finish construction and move on, his family takes a “build-and-hold” approach, motivating them to achieve easy maintenance, streamlined operations, and durability.

So, instead of vinyl planking, with its limited lifespan, the Continental’s apartment floors are tiled: a long-term investment. Often appearing more sophisticated and contemporary than traditional choices, other cost-savers include open powder-coated steel kitchen shelving in place of upper cabinets.

As local luxury rentals amp up amenities, the Segals have chosen to limit them. The Continental has no pool or gym. “For those extras, you’d pay $400 to $500 more every month—and might not even use them,” says Jonathan. They also dispensed with a front desk and full-time security guard but offer other perks: the laundry room borders a communal roof deck with panoramic views, making clothes-washing a potentially relaxing and social activity.

Initially, prospective tenants questioned the lack of parking, but the building soon filled up. “About 75 percent don’t own cars, while others leave them at work and walk,” Matthew reports. “I expected mostly millennial residents, but the Continental’s demographic is really diverse,” including college students, middle-aged professionals, and pied-à-terre retirees.

Although the Segals’ approach to garage space was hotly contested, local authorities have since relaxed neighborhood parking requirements for new residential projects. “What can I say?” muses Jonathan. “We’re often ahead of the curve.” 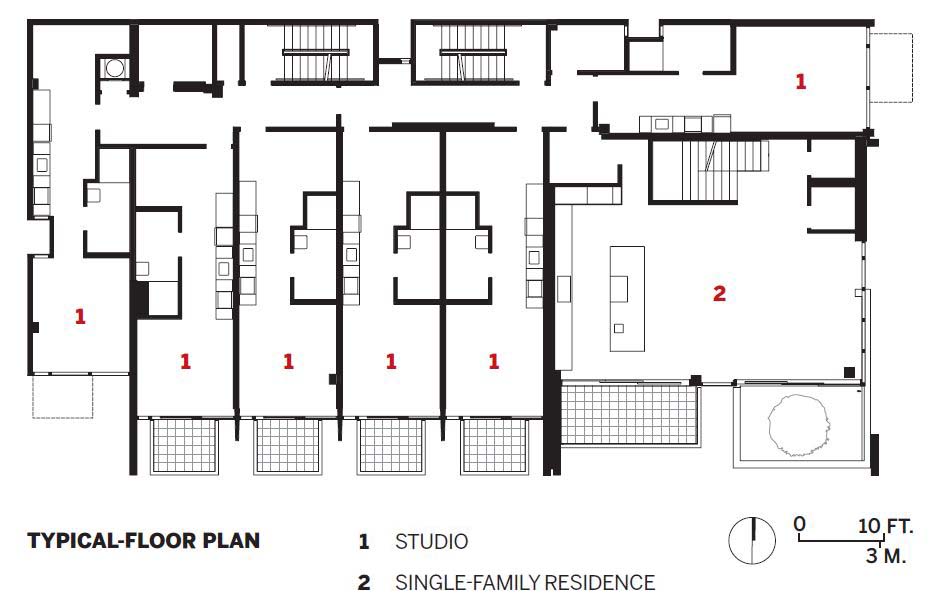