This website requires certain cookies to work and uses other cookies to help you have the best experience. By visiting this website, certain cookies have already been set, which you may delete and block. By closing this message or continuing to use our site, you agree to the use of cookies. Visit our updated privacy and cookie policy to learn more.
Home » Jacques Chirac School By Saad El Kabbaj, Driss Kettani, and Mohamed Amine Siana
ProjectsBuildings by TypeK-12 School Design

Working from a shared office in Casablanca, Saad El Kabbaj, Driss Kettani, and Mohamed Amine Siana have developed a distinct approach to practice that has served the young architects well. They each take on smaller independent projects, mainly high-end residences, but come together for large commissions, which have included several university buildings in the south of Morocco, a result of competitions they won not long after finishing architecture school, where they were classmates.

A more recent competition win led to their first K–12 project, the Jacques Chirac school in Rabat. While those earlier university buildings were spread out across large campuses and drew from the vernacular tradition of their region, this new private school sits on a prominent boulevard, and refers to the postcolonial architecture of the capital city. “Rabat has a beautiful modern heritage,” says Siana, a 2016 Record Design Vanguard, about the work of a generation of French and Moroccan architects who came of age in the 1960s. “They created simple, elegant buildings with sober volumes. That is what we wanted to do here.”

But, as Kettani points out, “it was a lot of program with not a lot of space.” So the design process became an organizational one, with the architects trying to optimize the tight, 2.75-acre urban site while maintaining the low horizontal lines and open green spaces of the surrounding context of private villas and embassies.

The 156,000-square-foot, three-story building stretches just over 400 feet to the limits of the previously empty plot, and contains within that one structure kindergarten, primary-, middle-, and high school classrooms for up to 1,500 students. The younger children occupy the southern end, the older ones are to the north, and support functions and common spaces—including a 250-seat theater and indoor and outdoor sports facilities on the ground floor, a large cafeteria and a library on the third floor, and offices on each level—are housed in the middle. 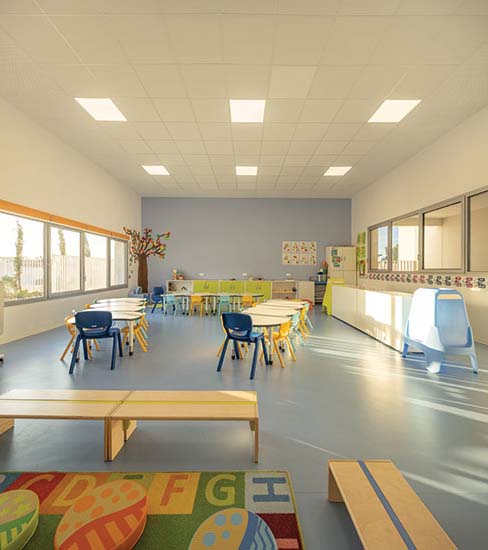 Splashes of color enliven the primary school (1), particularly where Moroccan tiles are used (2). Other interiors, like the theater (3) are more sober. Photos © Fernando Guerra, click to enlarge. 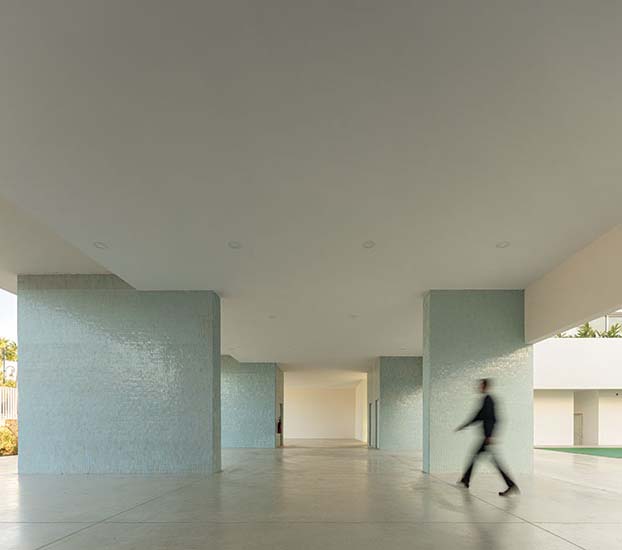 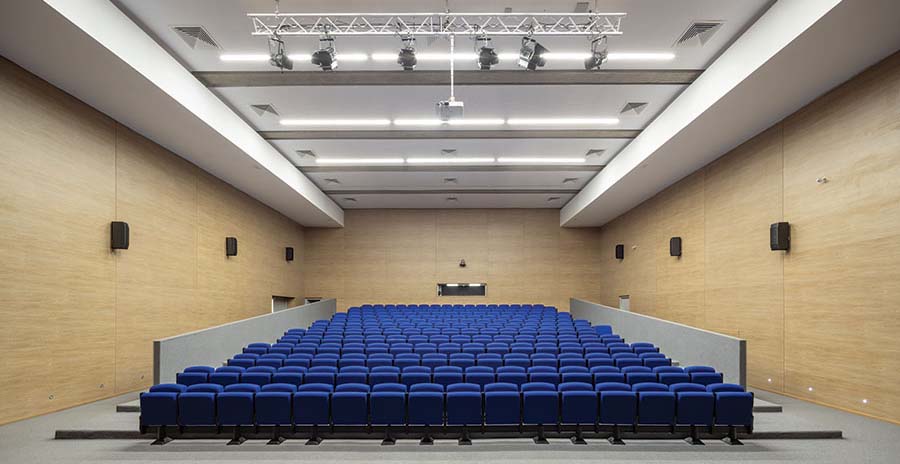 The upper portion of the brick and poured-concrete structure—which includes some precast elements over long spans in the auditorium and gymnasium—are dressed in a smooth white stucco typical of the area. In a similar fashion to the schools built in the city in the 1960s, the architects clad the ground floor in a rough local stone.

The sheer size of the building, and its overall abstract nature, make it monumental, especially within its residential neighborhood, but the architects did not want it to be monolithic. They broke down its massing by introducing a number of setbacks and terraces, many of which are planted, along the exterior walls and inner courtyards, and varied the height of the roof (which is also planted and contains solar panels to generate electricity for heating water). A series of mostly vertical one- and two-story-high brises-soleil, which not only mitigate solar gain but serve as acoustic baffles against the busy road, adds a vibrant, graphic quality to the composition. “It’s many ideas mixed into one big idea,” says Kettani. 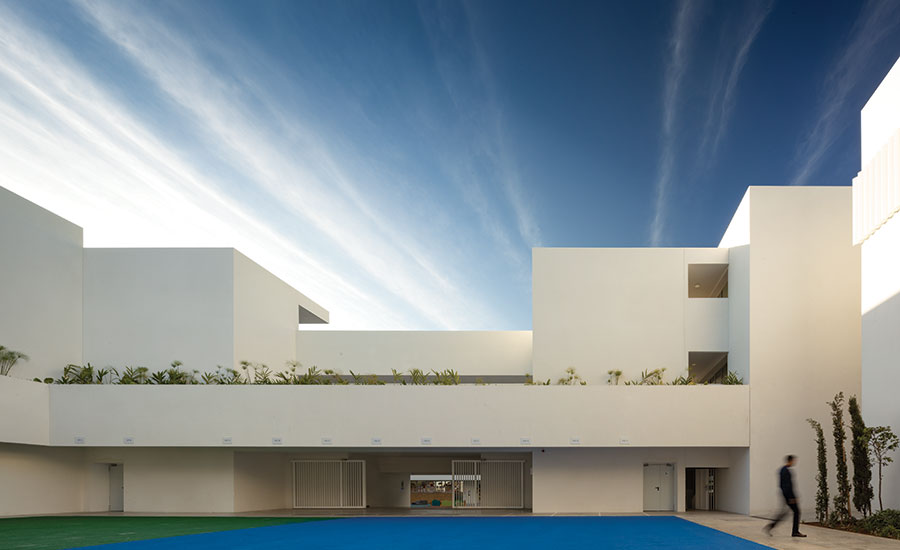 Due to the dense program, the interior logic, according to the architects, mimics in some ways the layout of a medieval medina, where narrow paths open up to the large voids of the courtyards. Taking advantage of the mild climate, the architects planned for covered outdoor corridors to access most teaching spaces—they used a similar strategy in their university buildings—and gave classrooms two orientations for cross ventilation. Only some common areas and offices have air-conditioning and mechanical heating. The 14-inch-thick insulated brick walls suffice to temper any extreme weather throughout the year. Stairwells, marked on the exterior by the horizontal brises-soleil that shade them, are left open to the elements.

Within the area of the primary school, the interiors of the pure white volumes are enlivened with color. Most notably, the architects used traditional Moroccan zellige tiles on architectural elements there to “add a sense of joy,” says Siana.

Over time, El Kabbaj, Kettani, and Siana have developed a design process in which they each contribute to every aspect of the design rather than tackle different parts of the whole. This project presented a particular challenge by compressing that process to less than six months, with construction of the school completing within a year and a half after that. Despite the fast-tracking, by looking to the past, the trio managed to create a design that is timeless. 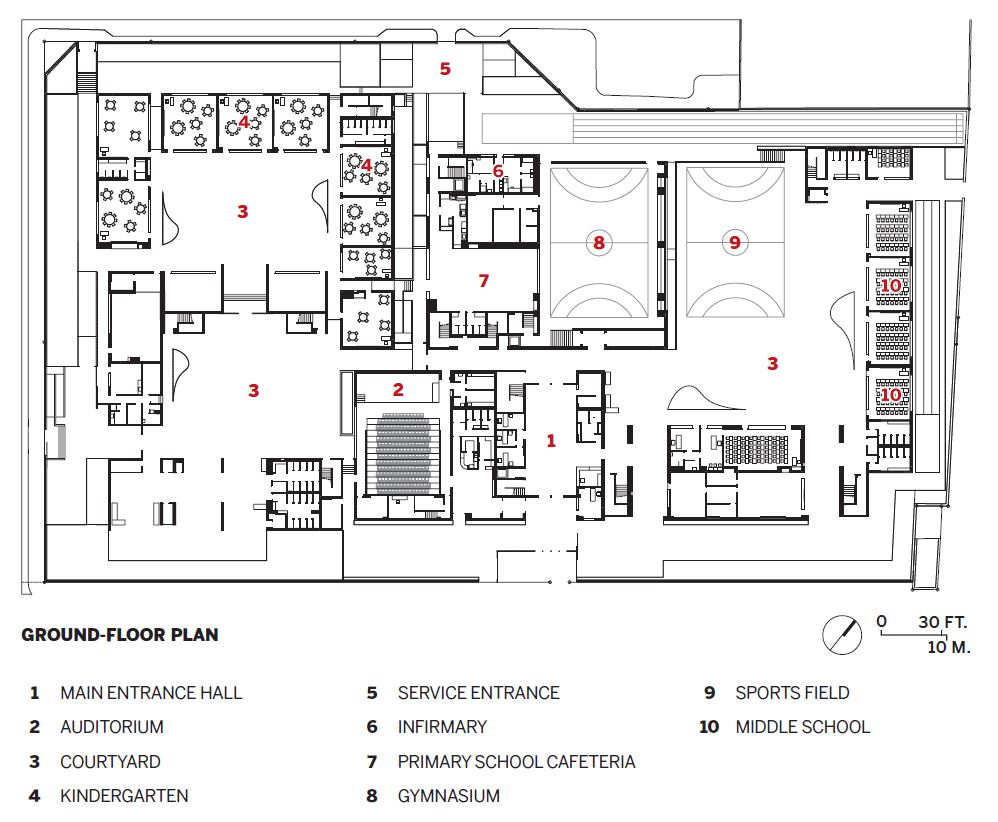