This website requires certain cookies to work and uses other cookies to help you have the best experience. By visiting this website, certain cookies have already been set, which you may delete and block. By closing this message or continuing to use our site, you agree to the use of cookies. Visit our updated privacy and cookie policy to learn more.
Home » Moynihan Train Hall Expands New York’s Penn Station
ProjectsBuildings by TypeReuse and RenovationTransportation Architecture

Named after Senator Daniel Patrick Moynihan, who championed it from the early 1990s until his death in 2003, the $1.6 billion project designed by Skidmore, Owings & Merrill (SOM) features a central skylit hall occupying the space that had originally been the 31,000-square-foot mail sorting room for New York City’s main post office. The enormous Farley Building was designed by McKim, Mead & White in 1913 as an architectural mate to Penn Station, which the firm had designed three years before on the other side of Eighth Avenue between 31st and 33rd streets. The pair of imposing Beaux-Arts buildings represented the grand ambitions of a rapidly growing city asserting itself as the nation’s commercial and cultural capital. 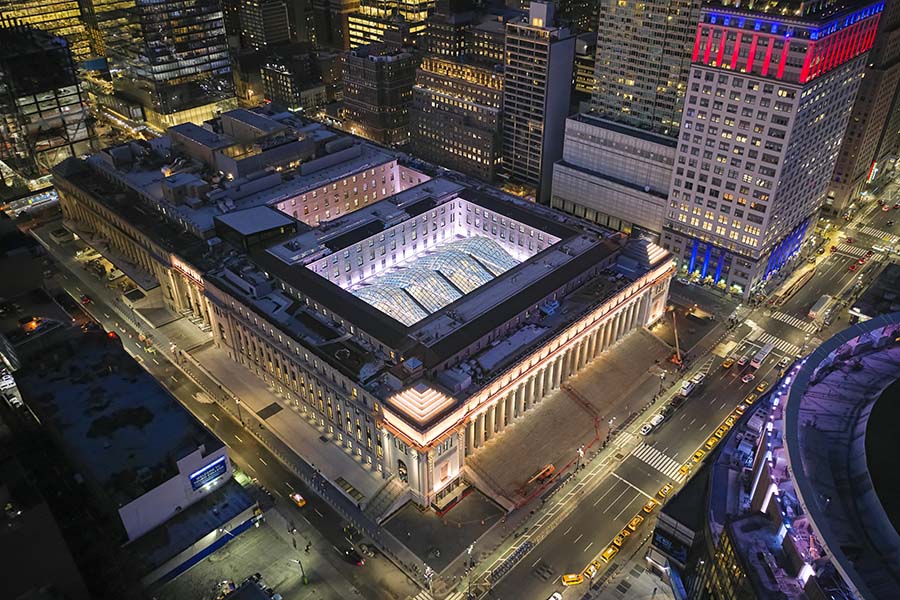 When Penn Station was razed in 1963 and replaced by a dreary underground station with a new Madison Square Garden above it, the Farley Building was widowed and in later years became increasingly irrelevant as the Postal Service moved most mail sorting operations to facilities west of Ninth Avenue. Meanwhile, the new Penn Station, which opened in 1968 to serve 200,000 riders each day, was being swamped by 650,000 people on weekdays before the Covid-19 pandemic struck in early 2020. So when Senator Moynihan proposed expanding Penn Station into the Farley Building the idea was greeted with applause all around. But getting a contentious group of stakeholders (Amtrak, the LIRR, the Metropolitan Transit Authority, the USPS, the federal government, the NY state government, the city government, civic organizations, and a continually shifting array of real-estate developers and investors) to agree to any particular plan proved elusive for decades.

As soon as all the pieces seemed to be in place to move forward, someone would back out or the economy would fall into recession or some bright person would propose making the project even more complicated by moving Madison Square Garden, for example, and using that space too. Every few years, the key players would announce major plans, starting in 1993 with a grand arched-roof design by Hellmuth, Obata & Kassabaum, followed in 1998 by a scheme by David Childs of SOM that received a lot of attention for its 150-foot-high, glass vaulted element nicknamed the “Potato Chip.” In 2005, HOK teamed up with Jamie Carpenter for another shot at the project, only to be replaced again by SOM a few years later. As time passed, architects ranging from SHoP, Diller Scofidio + Renfro, and Vishaan Chakrabarti’s Practice for Architecture and Urbanism offered unofficial schemes for the project. 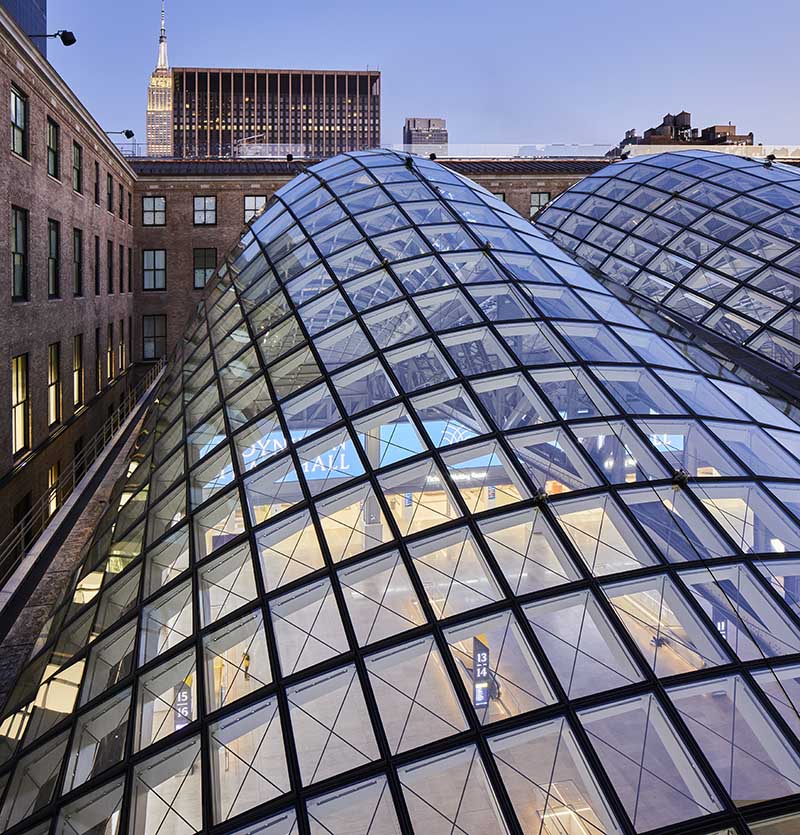 Each of the four catenary vaults is composed of more than 500 glass-and-steel panels that come together to form a moiré effect.. Photo © Lucas Blair Simpson, SOM

What finally got built is less ambitious than many of the earlier plans and lacks the kind of dramatic gesture found in some earlier iterations. Designed by an SOM team headed by partner Colin Koop and now retired partner Roger Duffy, it weaves together old and new—revealing important aspects of the Farley Building, while introducing a modern vocabulary of glass vaults and sleek marble surfaces. For example, the architects restored a trio of old steel trusses that spanned the mail sorting room, but had been hidden from view. Now the trusses separate four new catenary vaults made of glass-and-steel panels that are deeper at the base where structural loads are greatest and get lighter as they reach their apex 92 feet above the floor. Seeing the bolted connections of the original trusses next to the cable-stayed glass vaults, visitors to Moynihan Hall get a visual lesson in changing construction technologies and a demonstration of history as an ongoing narrative.

A similar experience unfolds for those who climb the grand stairs of the Farley Building’s newly renovated colonnaded façade on Eighth Avenue, buy stamps at one of the bronze-grille-fronted windows in the post office still operating there, and then walk into Moynihan Hall with its rippling modern skylight.

On the east side of the hall, a quartet of Amtrak waiting areas designed by Rockwell Group are tucked below a second floor where visitors will find dining and retail options, as well as Amtrak’s business-class lounge designed by FX Collaborative. On the north side, SOM designed a waiting area for LIRR passengers, who can place laptops on counters and access wi-fi. Sometime in the fall, a food hall designed by Elkus Manfredi will stretch out to the west on both the main and upper levels. Wrapping around Moynihan Hall and looking down into it are four floors of office space that are being renovated for Facebook. The social media giant is also renovating space in the Annex, which was built in the 1930s as a western extension of the Farley Building.

To provide public access to a building that had been used mostly by postal workers, SOM created five new entries—two on Eighth Avenue on either side of the stairs leading up to the post office, a pair on 31st and 33rd streets halfway between Eighth and Ninth avenues, and one on Ninth Avenue. For the Eighth Avenue entries, SOM eliminated a moat that had separated the building from the street and designed gentle ramps inspired by those at Grand Central Terminal to take visitors down to the main level of Moynihan Hall. The entries at 31st and 33rd streets and the glass-vaulted hallway connecting them are less dramatic than the tilting glass “Potato Chip” envisioned in 1998, but they serve as an attractive passage through the enormous building. “Transportation facilities are about the interconnections of modes of transit and the spaces between them,” said Duffy during a recent tour of the project. “The size of these places is so big that singular architectural gestures get lost.”

An ambitious public art program has been integrated with the architecture at Moynihan Hall, including stained-glass panels by Kehinde Wiley on the ceiling at the 33rd entrance, an installation of upside-down building models by Elmgreen & Dragset on the ceiling of the 31st Street entry, photo-murals by Stan Douglas on the walls of the Amtrak waiting rooms, and a clock by Pennoyer Architects hanging from the central truss in the main hall.

It may be ironic that Moynihan Hall opened at a moment when few people are taking mass transit due to the Covid-19 pandemic. Koop, though, says that the project is all about “relieving congestion and providing more space for commuters to spread out,” which will remain important even after the virus releases its grip on the region.

In separate projects, SOM is now working on renovating the unloved LIRR concourse in the existing Penn Station on the east side of Eighth Avenue and recently completed a new glass canopy and entry on Seventh Avenue leading to that concourse and the city’s subway system. There is also talk of renovating the space under Madison Square Garden that had served as Amtrak’s main hall and still functions as a waiting area for the railroad.

With Facebook moving into the Farley Building, other tech companies renting space nearby at Hudson Yards and Manhattan West, and major developers such as Vornado Realty Trust and Brookfield Properties busy with new and renovated office projects, the Penn Station area may soon emerge as an upscale commercial location. If it does so, Moynihan Train Hall will play a valuable role in that transformation.