The interiors look like the cellars of a modernist mansion or freakishly rectangular caves, made almost comfortable by a cushion or mattress. With glimpses of nondescript farmland outside, the appearance is at once modern and primitive. But this unorthodox habitat is the work of the Madrid- and Boston-based practice Ensamble. Known as Ca’n Terra, meaning “House of the Earth” in Catalan, the series of spaces is another fascinating experiment in the fundamental principles of dwelling, as pursued by the firm’s two partners: Antón García-Abril (RECORD 2004 Design Vanguard page 132) and a professor at MIT’s School of Architecture and Planning, and Débora Mesa, who holds the Ventulett Chair in Architectural Design at Georgia Tech.

Established in 2000, Ensamble has pursued two divergent tendencies in construction. On one side, the architects are technologically avant-garde. They built a factory to make prefabricated housing in the Madrid suburbs, but have also explored man’s primitive relationship to nature and human habitation.

For a project they call the Truffle, in 2010, they poured concrete around an orthogonal mold of hay, which they then covered with earth. Once cured, excavated, and cleaned, they converted this rectilinear cave inside a shed-sized artificial boulder into a guest room. For the 2016 inauguration of the Tippet Rise Art Center in Montana, they created a series of primeval sculptural works which were made from casts of the land beneath them to explore the intersection of earth technology and human culture. Their architecture is either technologically sophisticated and quick to erect or primeval and slow. “These are two sides of the same coin,” says Garcia-Abril. 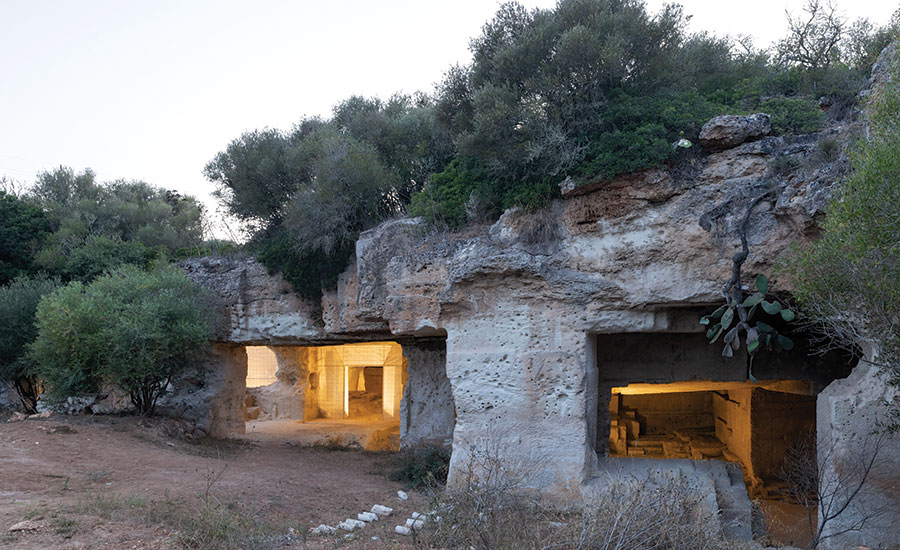 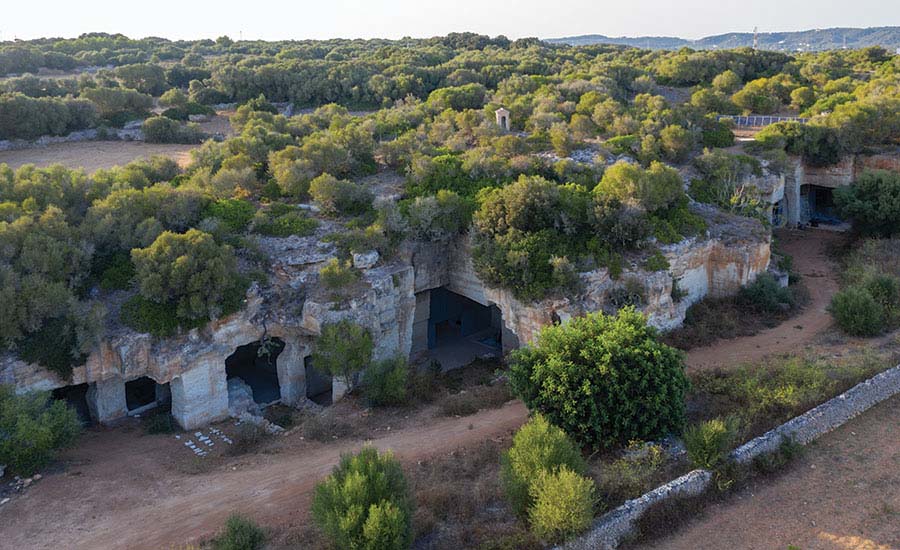 Ca’N Terra is an adapted quarry, open along much of its perimeter and covered with wild olive trees. Photos © Iwan Baan, click to enlarge.

It was while on vacation with Mesa, who is also his life partner, on the Mediterranean island of Menorca that Garcia-Abril, scanning a real-estate website, saw a series of what looked like caves on the periphery of a property. He had to take a look at them. But rather than caves, he had discovered a small quarry for Marés stone, a sandstone from which nearly all the preindustrial—and some more recent—buildings on Menorca have been built. He and Mesa were intrigued.

“What we know about the place is that it was exploited by industry in the 20th century. In the 1930s, after the Spanish Civil War, the military used the quarry as an ammunition warehouse,” he says. It had even been partitioned and installed with a kitchen. Garcia-Abril believes that the quarry itself is more ancient. The site is adjacent to a Bronze Age megalith known as a talaiot (a stack of Marés stone), though there is no proof that the stone for that structure originated from the quarry. 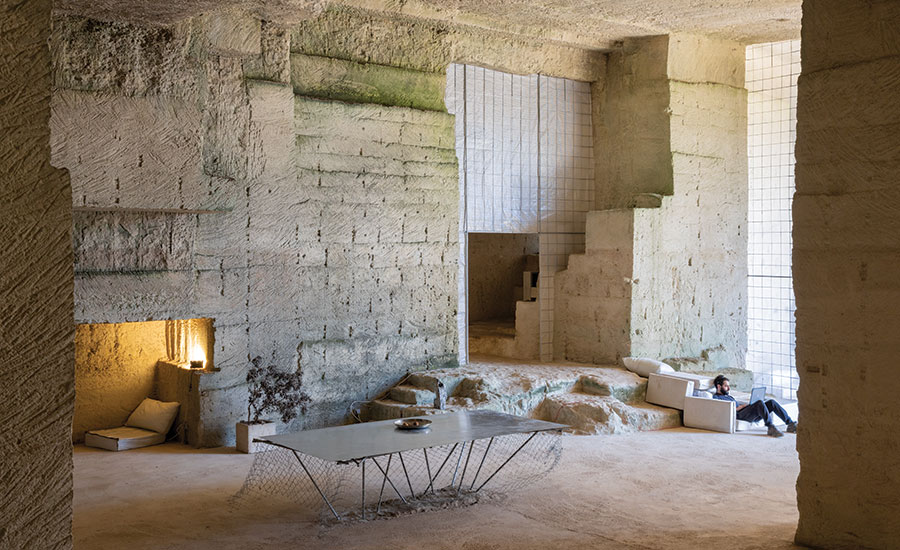 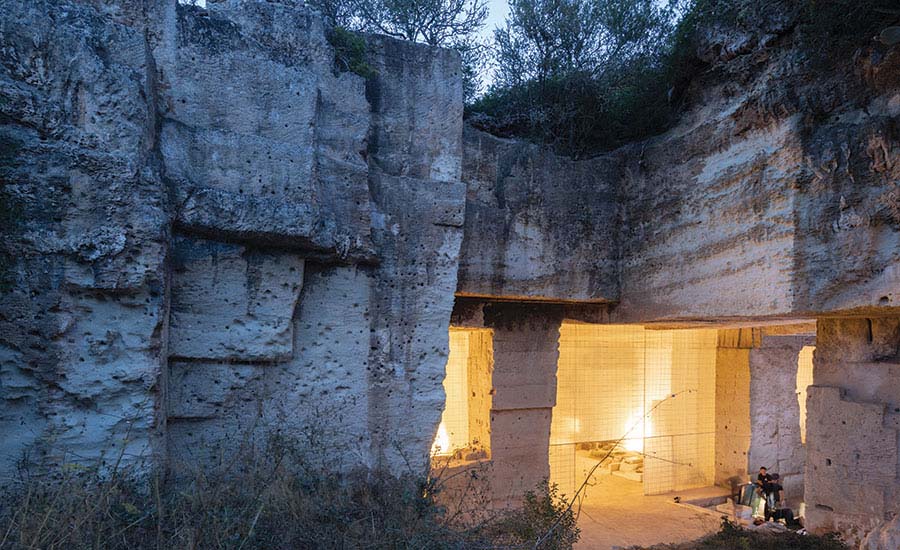 Ensamble has ascribed uses to spaces. This room is a kitchen/dining area. Translucent plastic sheets prevent dust and animals from entering, while allowing daylight in. Photos © Iwan Baan

The front elevation of the Ca’n Terra is, in appearance, neither anthropological nor industrial. It is a 60-foot-high bluff of rock sporadically covered in thickets of wild olive and cacti, which shade several entrance points, some as high as 30 feet, leading to a complex of quarried “rooms.” Inside, the walls are roughly hewn, giving a stark, primordial effect, although the spaces they contain are legible as generous modern rooms, even if haphazardly connected. The chambers, where stone was carved out long ago, reach as far as 150 feet deep into the rock, with an area of around 300 feet stretching out across the front. “It was already architecture when we found it,” says Garcia-Abril. “Hidden architecture, unpolished and raw.”

Although Ca’n Terra was not really built, the process of creating what it is now took place over the last three summers. Garcia-Abril, Mesa, and their team bulldozed and shoveled out “tons and tons” of rubble, and removed partitions and walls that had been erected when the site was a munitions dump. Then they pressure-washed the walls to reveal the striking and surprisingly bright Marés stone, marked with the scars and curlicues of a thousand acts of excavation. They also created a 3-D map employing LIDAR (Light Detection and Ranging) technology, a form of laser scanning used in archaeology and mining, to determine the true scale of the space they had literally unearthed.

Since they bought the land in 2017, the process of adapting and inhabiting Ca’n Terra has been incremental and the interventions as minimal as possible. There was no desire to create a program as one might for a conventional building, although they decided to put a kitchen where one had previously been. After the debris was cleared out, the major additions have been concrete floors in spaces close to the exterior, as well as the creation of an extra skylight through an incision in the rock. While Ca’n Terra is a shelter, it is not a conventional dwelling by any stretch of the imagination but, instead, a place for camping. Water comes from an existing well. An aerobic septic system deals with wastewater, and solar panels provide limited power. Those in the Ensamble team vacation there and bring students for field trips. 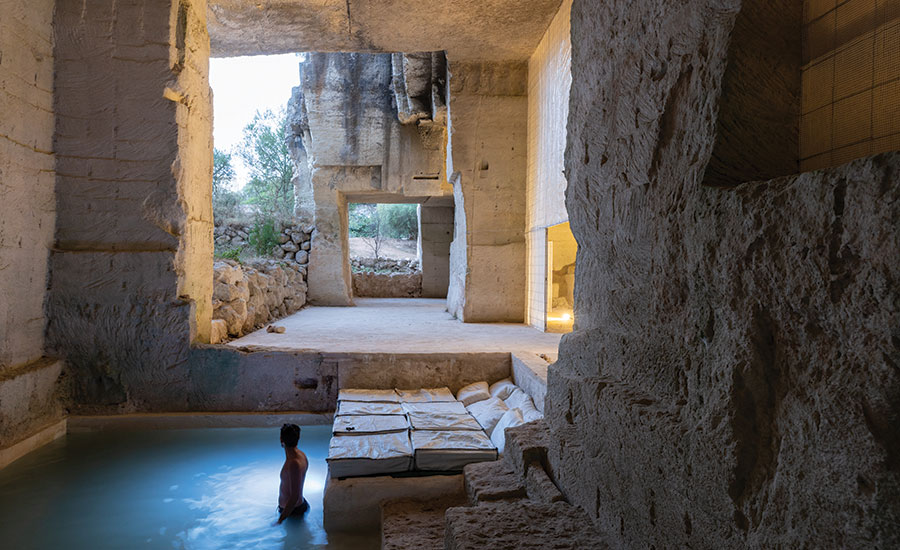 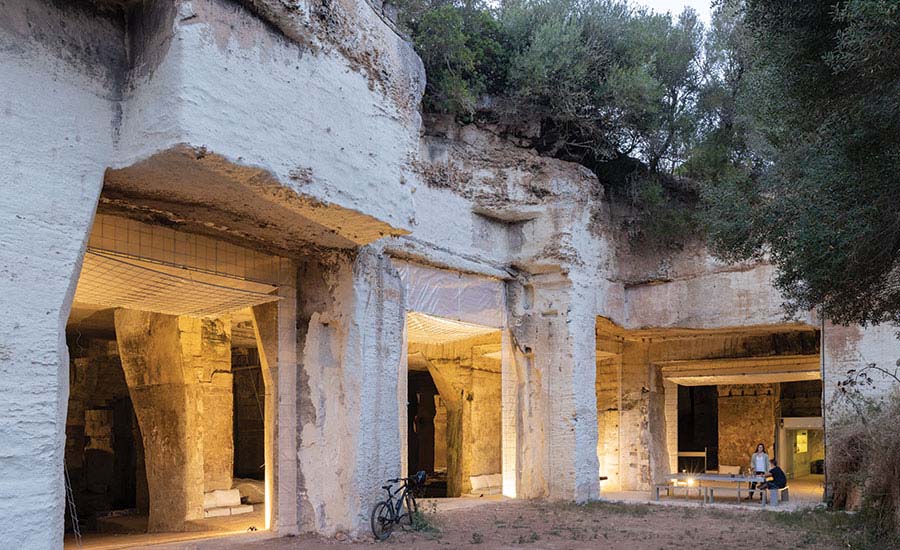 This off-grid experiment in living simply is blessed with a rainwaterfilled pool, which has been furnished with lounge cushions (1). In the evening, the screens are raised on an armature for fresh air (2). Photos © Iwan Baan

Primarily, it is an experiment in how to occupy the earth through minimal gestures. Reinforced plastic sheeting, hanging from metal tracks recessed in the stone, delineate an entrance space at the southern end of the quarry. Balancing humidity is as much a reason for this addition as establishing a barrier to stop animals from wandering in, the way they used to when the space was abandoned. The pool at the southernmost point of the complex is simply a cistern that was already in the quarry to collect rainwater. Cushions on a flat piece of rock create lounges. Steel benches have been attached to the rock in the adjacent space, creating tables and seating. Other parts of the habitat, deeper into the former quarry, are completely untouched and can be read as art—sculptural voids or anti-monuments. The various areas are all lightly inhabited.

“We wanted to silently go through the space and make communion with it,” says Garcia-Abril. “That’s exactly the project.” 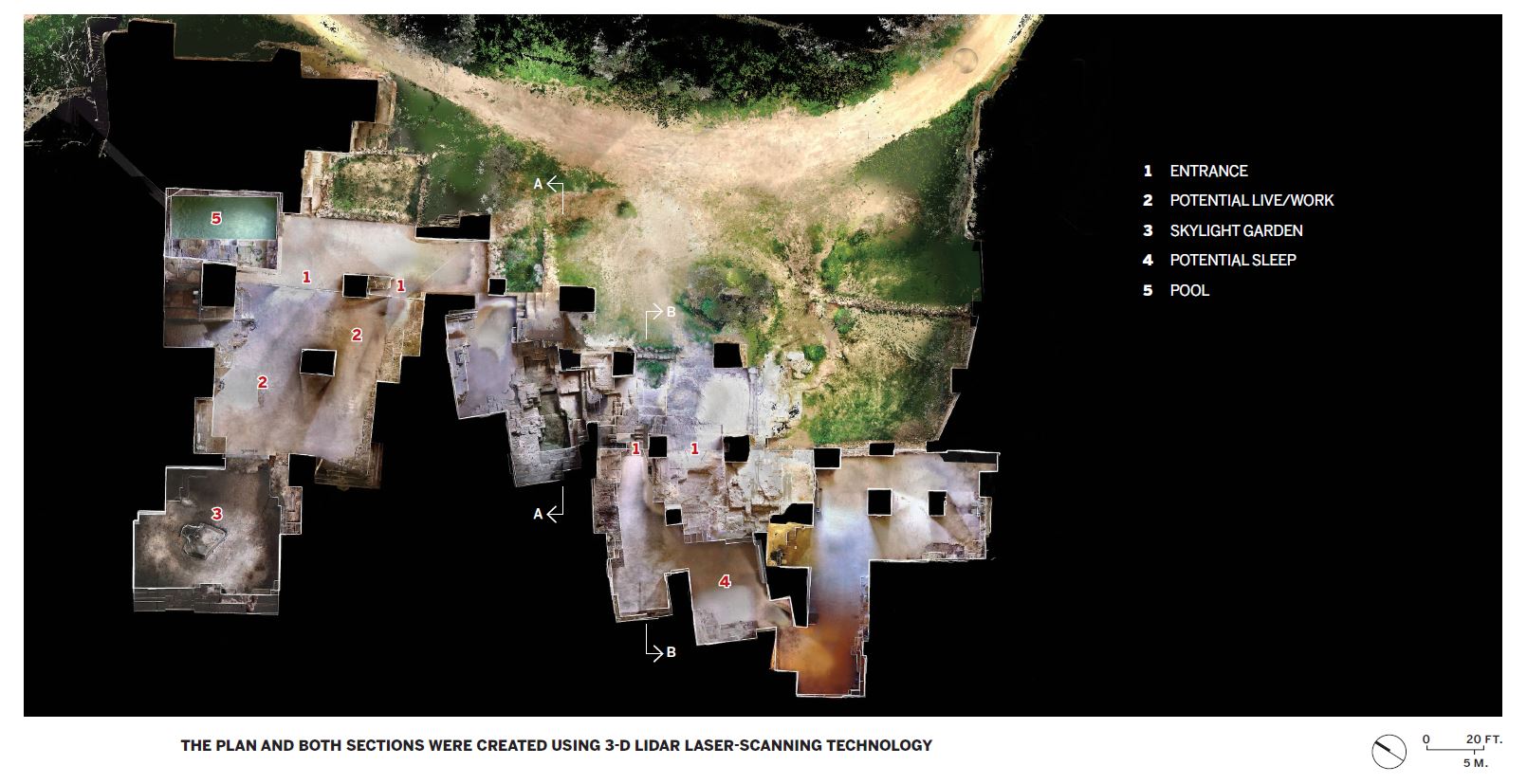