Syracuse University has unusually strong ties to the U.S. military, going back to World War I when it established a Student Army Training Corps and then expanding significantly after World War II, when it waived admission requirements for returning servicemen. By 1947, a rush of 9,000 veterans tripled the size of the student body, shaping a campus culture that welcomed their involvement rather than marginalizing it. The new National Veterans Resource Center (NVRC), designed by SHoP Architects, builds on that legacy by bringing together military and civilian students, as well as the public and the university.

The center serves as a home for a broad range of veteran services—including counseling, which requires privacy—while drawing in civilian students and the public to attend events in its 750-seat auditorium or enjoy meals in its banquet space. The architects needed to create a large building that would occupy the width of a full city block and work on the urban scale while at the same time crafting a place that would engage people who wanted to grab a snack at a canteen or view art in a modestly sized gallery. 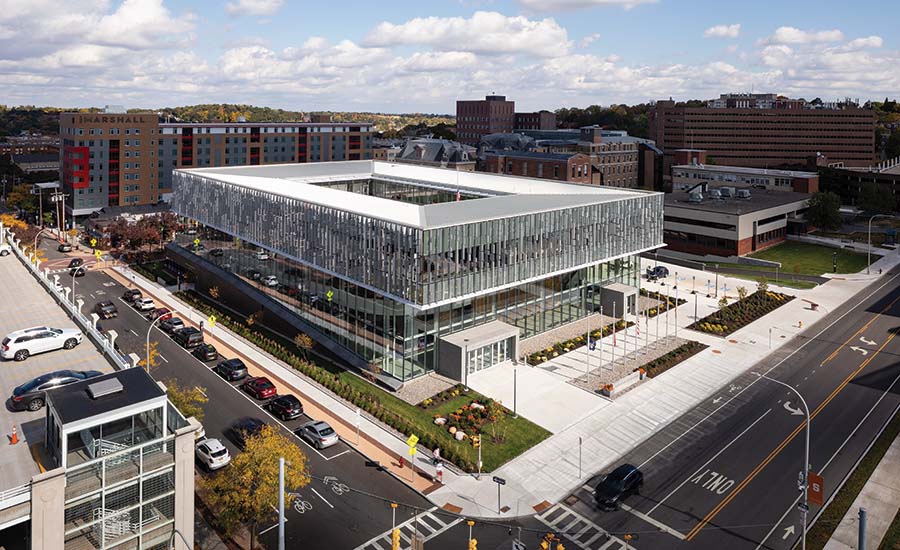 Aluminum fins bent at different angles give the upper portion of the building a cloudlike character that contrasts with the more public and transparent lower floors. Photo © James Ewing/JBSA

Set at a pivotal location between the school’s historic campus to the south and the city to the north, the 126,000-square-foot building— owned and operated by the university—is a new gateway between town and gown. To break down the bulk of the four-story box, SHoP split it in two: the firm wrapped the lower floors in clear glass to invite the public inside, and on the upper floors installed reflective glass studded with projecting aluminum fins to ensure privacy for the offices, conference rooms, and teaching spaces used by veterans and their families. By pushing the upper floors out past the lower ones, the architects could fashion colonnaded porticoes on three sides of the building’s base. “We wanted the upper portion to float like a cloud and reflect the sky,” says Christopher Sharples, a founding partner of SHoP. The vertical fins extend beyond the glass by 10, 12, 14, or 16 inches and bend at different angles—a strategy inspired in part by Isamu Noguchi’s Wind Catcher galvanized-steel sculptures from the 1980s—to animate the upper facade. 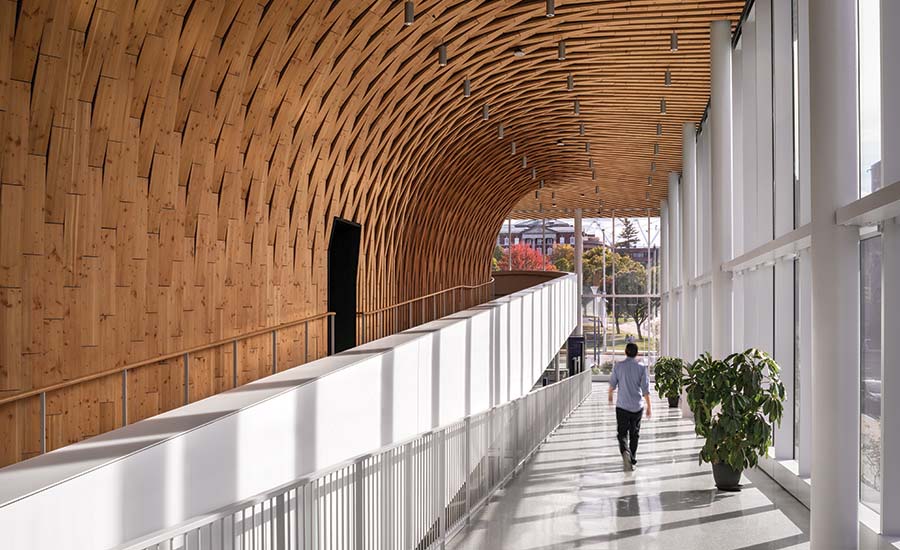 Visible from the street, a digitally fabricated wood “wave” serves as a civic gesture (top), inviting people inside where Douglas fir curls over a ramp (above) leading to an auditorium. Photo © James Ewing/JBSA

To lure people inside, SHoP designed a curving wood element that snakes from the entrance on the south through the building, guiding visitors up a gentle ramp to the balcony level of the auditorium or down to a lower floor with a small canteen, art gallery, and classrooms. SHoP has long employed digitally controlled fabrication of simple materials, such as engineered-wood products, to make organic forms that crest like waves or spread out like tree branches. In Syracuse, the firm set the latest iteration of this signature approach behind the building’s clear-glass base, giving it visibility from the street. “It’s a civic gesture,” says Christopher Sharples. Speaking of its branching, carefully crafted form, his twin brother and fellow SHoP principal William Sharples says it has “a certain Gothic quality.” 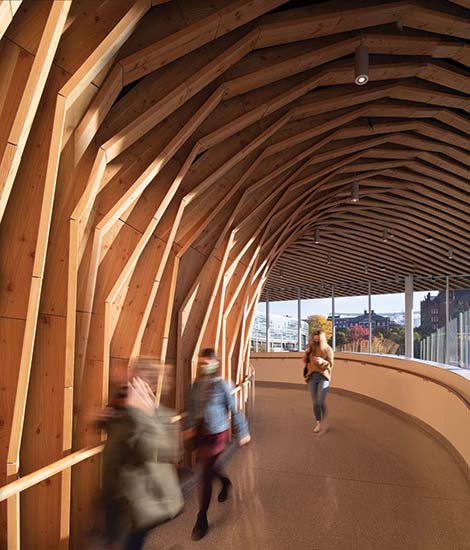 Made from cross-laminated timber, the wave is both suspended from above and attached to walls on the side. Photo © James Ewing/JBSA

The building is meant to raise the profile of veterans on campus among all students, so the ramp down to the lower level was designed as a Hall of Honor, with displays of important military figures and events at the university. The center also serves as a dedicated hub for students in Reserve Officer Training programs and those who are veterans, as well as their families. SHoP balanced the needs of these main constituencies, creating two entries on the south side of the building—a large one for everyone attending events in the auditorium or banquet space, and a smaller one for those using the veterans’ facilities. The upper two floors are reserved for military and veterans organizations, with the top one featuring the Parade Ground, a central courtyard for outdoor exercises and gatherings. “We thought of the Parade Ground as a cloister, a controlled landscape out of view from the public,” says John Barrett, a SHoP project director. 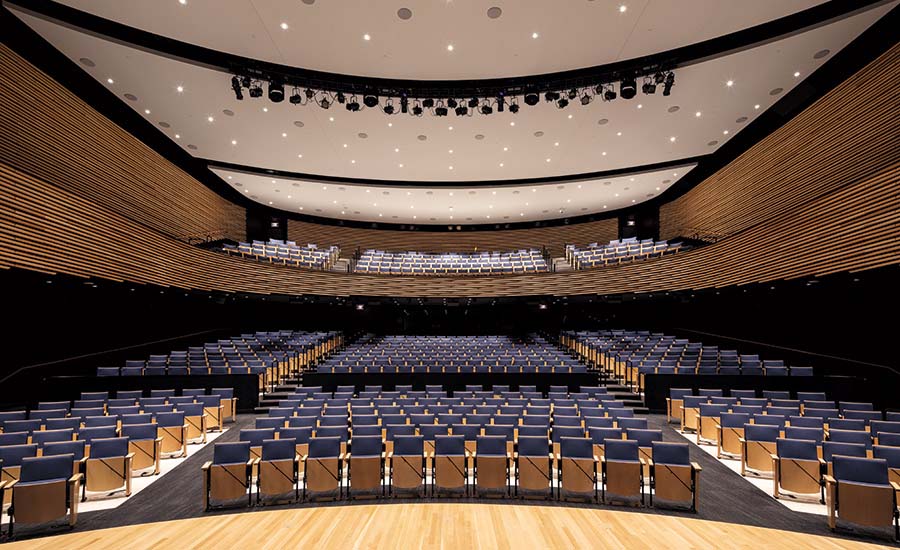 Acoustic panels of ash wood wrap around the balcony in the 750-seat auditorium. Photo © James Ewing/JBSA

Because many veterans using the building have been injured during their service, accessibility was a critical concern. The gently sloping ramps to the lower level and the auditorium balcony are treated as featured elements in the overall design—not code requirements that must be met—and are 10 feet wide, so two wheelchairs can move comfortably side by side. The auditorium itself has about eight times the usual number of spaces for wheelchairs. SHoP wrapped its interior with undulating ash-wood panels that give the impression of a basket weave and embrace the audience. Designed to accommodate a variety of functions—from talks to performances—the auditorium is meant to be a flexible space; Dana Getman, a SHoP principal, likens its adjustability to that of “a Swiss Army knife.”

Opened during the Covid pandemic, the center has functioned at limited capacity. But its auditorium has helped the university adapt to hybrid learning, acting as a spacious classroom even though it was not intended for that use. The multipurpose project, serving disparate communities, is an architectural hybrid that knits together the distinct identities of public, academic, and military. 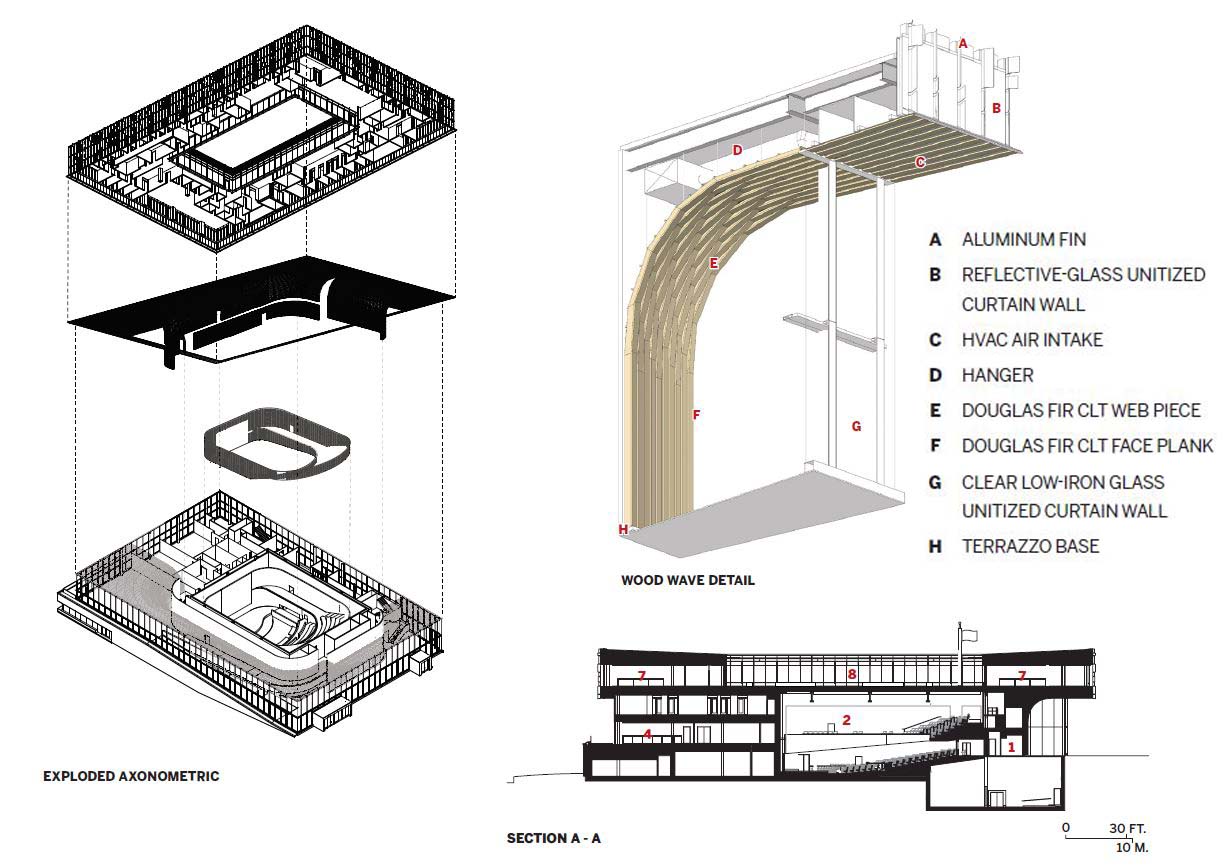