Michelle Depass, the CEO of the Portland, Oregon-based Meyer Memorial Trust, the state’s largest private foundation, thinks the label “civic building” is less about the architecture than action. She would argue that the Trust’s new headquarters fits the definition: “Building democracy isn’t about four walls. It is a participatory practice.”

Conceived and built by a local team that included a developer called Project^, LEVER Architecture, and O’Neill/Walsh Community Builders, the Trust’s new headquarters, in the Lower Albina neighborhood, is in the historic heart of Portland’s Black community, near many of the Black-oriented organizations Meyer is investing in. A trio of peaked roofs, eccentrically angled to accommodate solar panels, recall the gabled houses once plentiful in the area. The wrap of custom-profiled corrugated metal echoes the industrial environs, while the mass-timber construction, exposed in the building’s public spaces, imbues it with a civic sturdiness. It’s vying for LEED Platinum. “The headquarters,” says DePass, “is the embodiment of our goals for sustainability, but also for inclusion and economic development.”

Seeded by the estate of the regional supermarket magnate Fred Meyer, 39 years ago, the $840 million trust has undergone a dramatic transformation in the past decade. From a traditional grant-maker largely steered by white men it has evolved into a dynamic BIPOC-led pioneer in social-impact investing that delivers grants and technical assistance statewide.

Five women led the development, design, and construction team, including Anyeley Hallová, who oversaw the development of the new headquarters while she was partner at Project^, and Chandra Robinson, a LEVER principal. It was a “very robust process,” according to Hallová. The trust’s 44-member staff weighed in on “every design iteration” of the building, landscape, programming, and interiors, says Robinson. Meyer’s goal of being a community anchor drove the selection of the site—a former tow-truck storage lot—to try to reclaim the once-bustling Black neighborhood that was destroyed by urban renewal and the construction of a freeway, as has happened in so many American cities. Among its many initiatives, Meyer and its partners are working to “re-root” those pushed out, anchoring the community that remains while attracting a new generation of African-American residents and businesses. 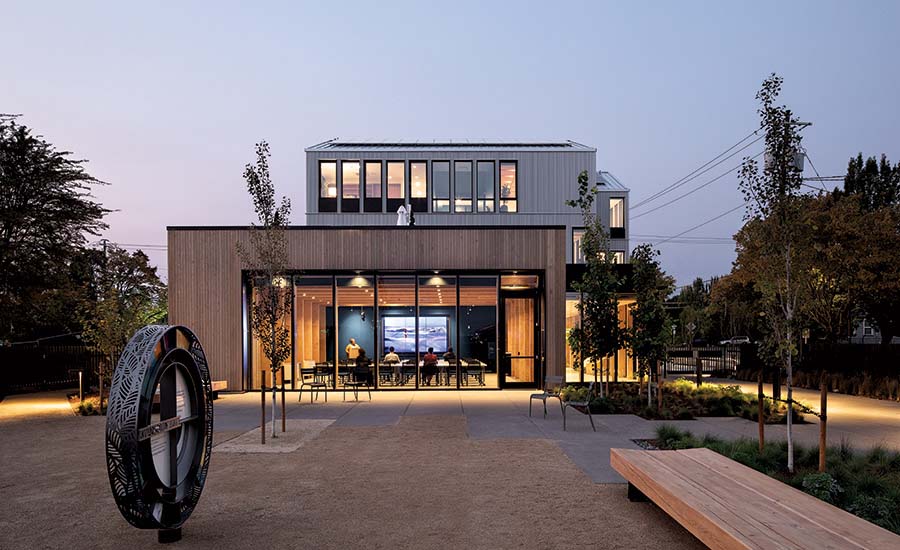 The new headquarters is pushed to one edge of its site to allow for a garden at the opposite end. Photo © Jeremy Bittermann/JBSA, click to enlarge.

The $10.8 million, 19,800-square-foot three-story building’s parti reflects the district’s past, present, and hoped-for future. Clad in glass and cedar, the building’s ground floor houses the organization’s more public interface of lobby, flex space for coworking, and the “Center for Great Purposes” (CGP)—a meeting room with a capacity for 105 seated (162 standing), named after a phrase from Meyer’s will. The building is pushed to the site’s north edge, offering space at the south end for a garden and preserving sweeping views of the city and the Willamette River from the street—one of the city’s major bike/transit thoroughfares. Set back 8½ feet from the property line, the building’s base creates a “front porch,” with plants and seating that welcome visitors or just someone waiting for the bus. The metal siding catches the changing light with a soft glow, making the structure stand out from a distance. 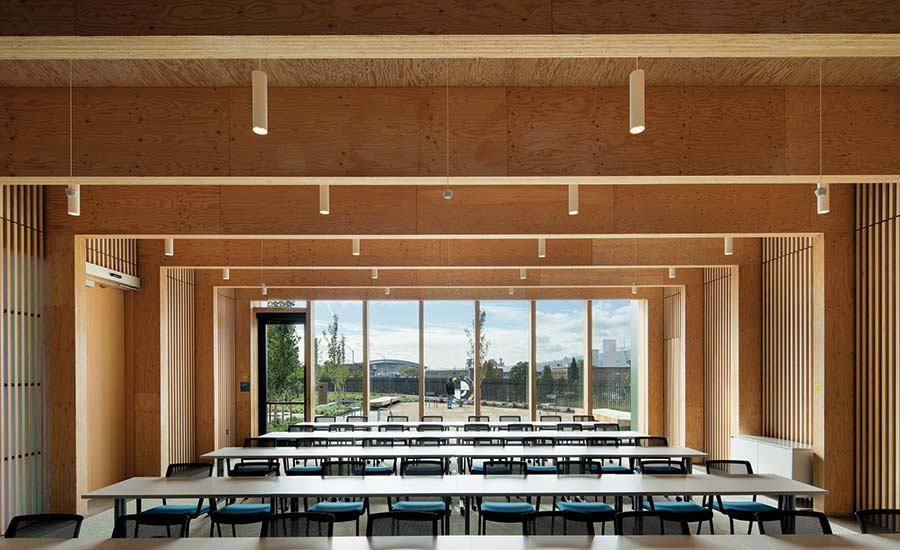 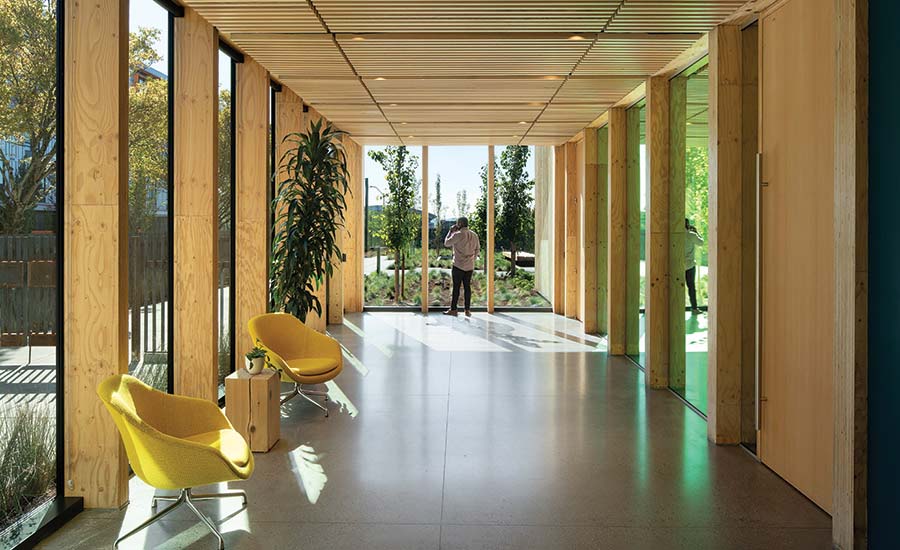 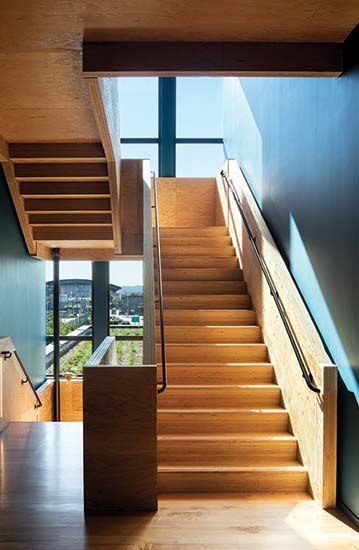 The structure of mass-plywood panels is exposed throughout much of the ground floor, including a convening room known as the Center for Great Purposes (1), its adjacent pre-function area (2), and the main stair (3). Photos © Jeremy Bittermann/JBSA.

Inside, details are bold but spare. Muscular mass-timber panels shape the central stairwell and surround the CGP in thickly plied columns, beams, and floor slabs, lightly coated with a whitewash to cool the wood’s natural orange. Hemlock slats, coupled with floor-to-ceiling dichroic glass, transform one side of the CGP into a constantly changing light show. Throughout, walls painted in a deep blue, with works by local artists, denote public and circulation spaces. 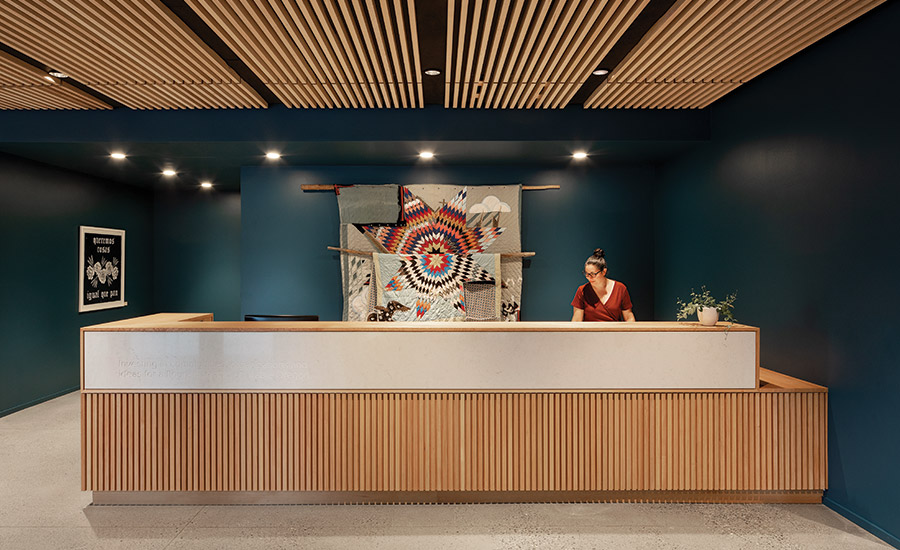 Walls painted a deep blue, such as those surrounding the stair and the reception area (3 and above), denote circulation spaces. Photo © Jeremy Bittermann/JBSA

The two upper office floors express the Trust’s internal equity goals. Whether open or enclosed, all work spaces enjoy the same natural light and views. Corners are reserved for conference rooms, a dining area, and a library. Restrooms are all-gender. A scattering of skylights illuminate the conference areas as well as a nursing room. The staff selected the eclectic array of seating, in a variety of widths, heights, and styles, with an eye to comfort for those of various physical abilities and body sizes. 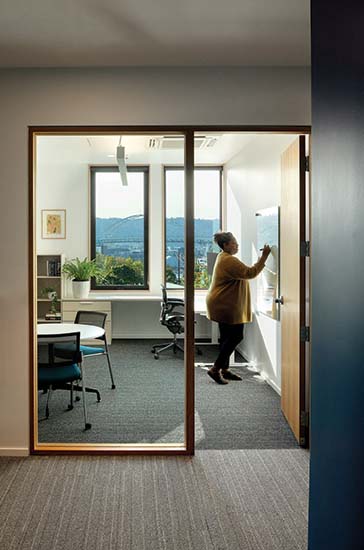 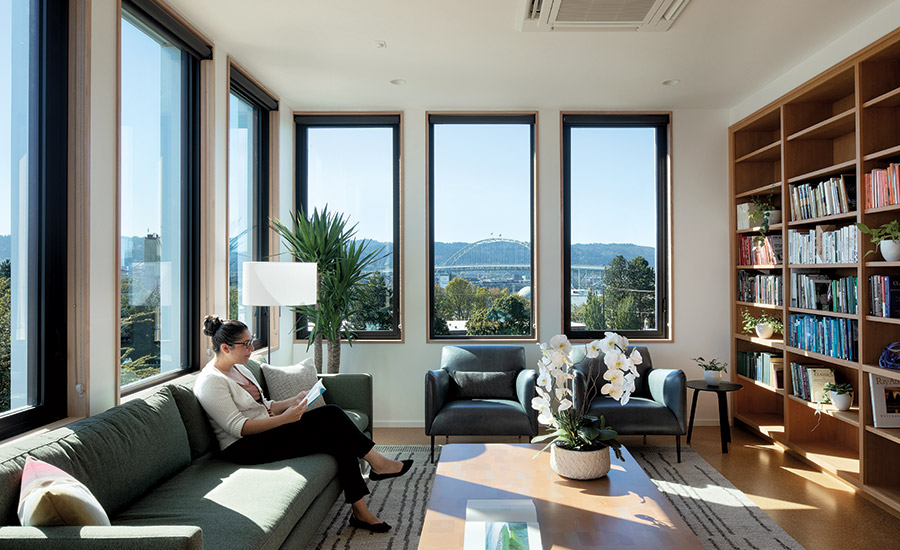 The workspaces on the upper floors, including the offices (4) and a library (5), have generous windows, providing daylight and views, and a variety of seating types to accommodate staff preferences. Photos © Jeremy Bittermann/JBSA

In particular, Meyer applied its equity lens to material selection and contracting. Working with the nonprofit Sustainable Northwest, the team developed new timber specification guidelines in which the Forest Stewardship Council (FSC) certification was weighed equally with proximity of sourcing, innovation, and minority, female, and indigenous ownership, as well as cost. The project recently won an FSC Leadership Award, with 85 percent of the wood meeting the new criteria. For example, the building’s mass-plywood panels are a patented composite lumber product invented and made only in Oregon. Of all the suppliers, 47 percent were minority- and women-owned businesses. Of the contractors, 20 percent were small companies that had never worked on a such large, prominent project. The mandate, Hallová notes with a smile, forced LEVER at times to modify their details. “Rather than design and then let the subcontractors figure out how to build it,” Hallová says, “the question for the architects became, how should they design so the subcontractors can more easily build?”

Sustainability benchmarks often come at a cost premium (the custom, certified timber was 3 percent more expensive than anticipated)—and so can design for equity and inclusion. O’Neill/Walsh did charge extra to provide shop drawings for the novice subcontractors, according to Hallová. But, says Robinson, “it was a learning process, and our passion.” She adds that, in her 14 years as an architect, she had never worked with a leadership team that was all female and majority Black. Construction can sometimes be a combative blame game but, on this project, she notes, “We were like, ‘Dang, this is cool. We’re all women.’ It became about supporting one another.” 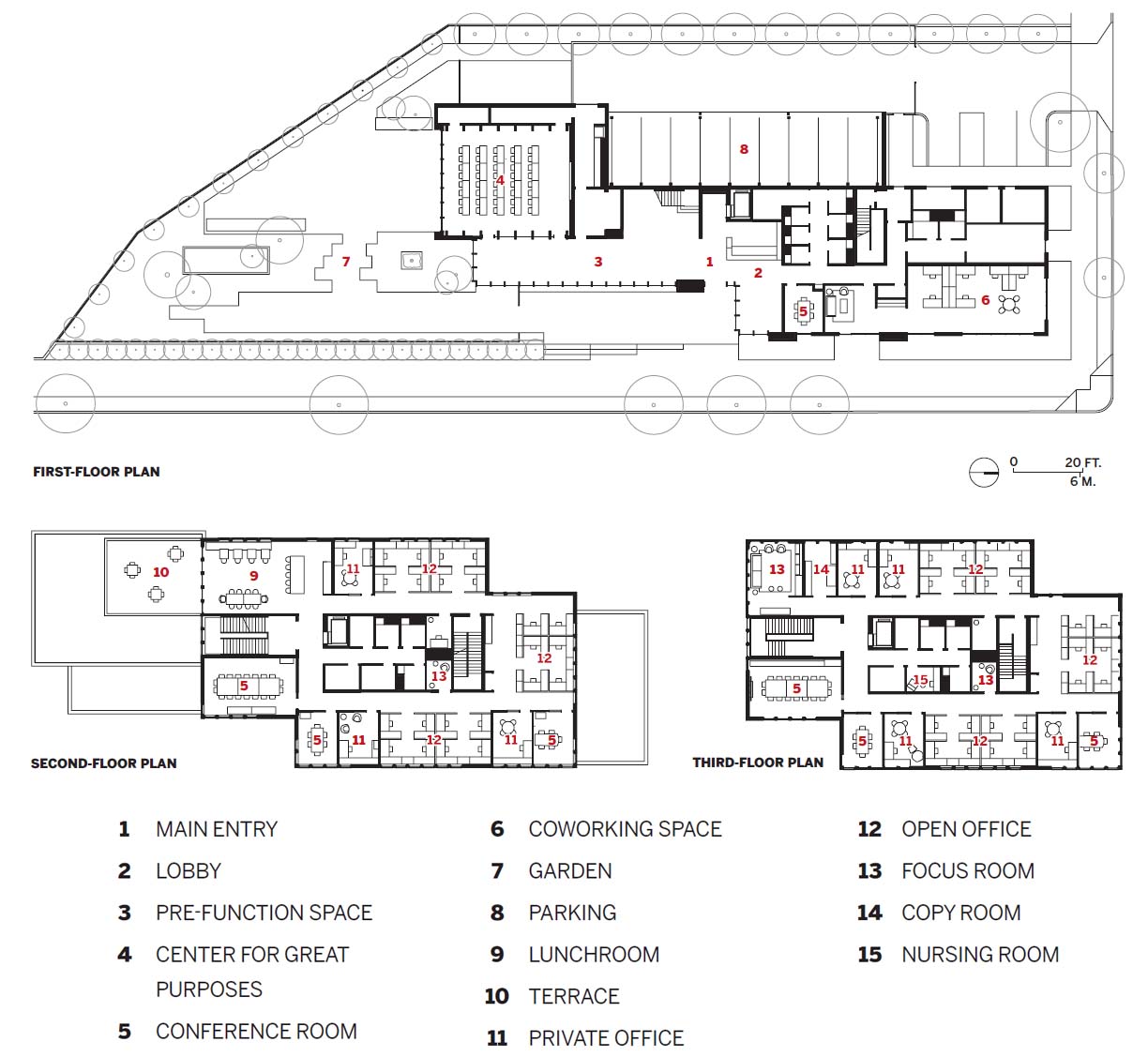