California freeways have long inspired a legendary car culture. But classic fixtures of that lifestyle are primed for change. Last fall, the state’s governor, Gavin Newsom, set 2035 as the year by which all new cars and passenger trucks sold in California must be zero-emission, or electric, vehicles (EVs)—a decade and a half ahead of the current federal deadline of 2050. (The UK has since revised its own target dates, which are now similar to California’s.) In late January, General Motors upped the ante, announcing that, by 2035, it will sell only EVs worldwide. This profound transformation will have implications well beyond the natural environment. For example, what will happen to gas stations? It may not make sense simply to convert them into charging venues, which, with current technology, demand time and space far exceeding that of traditional fueling. Though innovations with batteries and re-energizing methods continue to emerge, a full recharge still takes anywhere from 40 minutes to, more typically, an entire night. This means the process requires places for cars to sit, making home charging and parking lot plug-ins the most likely alternatives for the immediate future. So, what will become of the ubiquitous gas stations—more than 107,000 across the United States and over 7,000 in California alone—that punctuate neighborhoods and roadways with their logos and sweeping canopies, beckoning like great 3-D billboards?

“I think there’s a real commercial opportunity here—and potential to increase community amenities,” says architect (and longtime electric-car owner) Craig Hodgetts, of Mithun | Hodgetts + Fung, in Culver City, California. “There’s probably a gas station within walking distance of most homes throughout the country, making them a natural fit for another kind of chain, like coworking spaces or small parks or gyms.” Though the canopy (and even the entire site footprint) might be too small to harvest sufficient solar energy for daily recharging of one vehicle after another, it could provide enough power for another type of business to operate at net zero. Modifiable elements of branding consistency would already be in place. And, since the original structures tend to be “industrial products with standardized prefab components,” Hodgetts adds, “they offer a kit of parts that could be readily (and economically) repurposed.”

The filling station has a long history of adaptive reuse, dating back to the latter half of the 20th century when mom-and-pop operations gave way to multi-pump mega-stations. Over the years, decommissioned fuel stops have become auto body, muffler, or tire shops, as well as everything from one-off hair salons and clothing boutiques to law offices. Many have re-emerged as snack shacks or restaurants—turning pumping areas into outdoor dining patios—including the B Bar & Grill in New York (a Gulf station, converted in 1993), Kellys Pub ABQ in Albuquerque (originally a 1939 Deco-style Ford dealership/Texaco station, rendered in white-stuccoed concrete block), and Afters ice-cream parlor in Pasadena, California (formerly a quaint 1929 gas stop, whose three vintage pumps remain today as props). Starbucks restored a vacant 1935 Streamline Moderne gem in Hollywood, California, six years ago—swapping one kind of refueling for another. (The rare gasoline vendor that has converted entirely to electric charging includes one in Takoma Park, Maryland, which switched over in 2019—but strategically retained its bustling auto-repair business on the same property.) Service stations often occupy corner sites at major intersections, which—coupled with the fact that two-thirds of the profits typically come from their mini-marts (selling snack food, cigarettes, groceries, lottery tickets, beer, and other beverages)—suggests the viability of these locations for non-fueling enterprises.

The Hollywood filling station that’s now a Starbucks had already been designated a Los Angeles Historic-Cultural Monument. Such protections are not entirely unusual. Across the country, at least 142 classic stations are on the National Register of Historic Places and/or locally landmarked (including one by Frank Lloyd Wright, from 1958, in Cloquet, Minnesota, and still selling gasoline today). “There’s a nostalgia for these vintage structures and the ‘glory days’ of the great open road,” says architect Antoine Predock (a motorcyclist who has switched completely from gasoline to electric-powered bikes). “Cool examples—like the one that became a burger stand along Route 66 near Albuquerque—seem to get saved through ‘natural selection.’ It’s been happening for a long time—I don’t think we have to worry about losing the most iconic ones.” 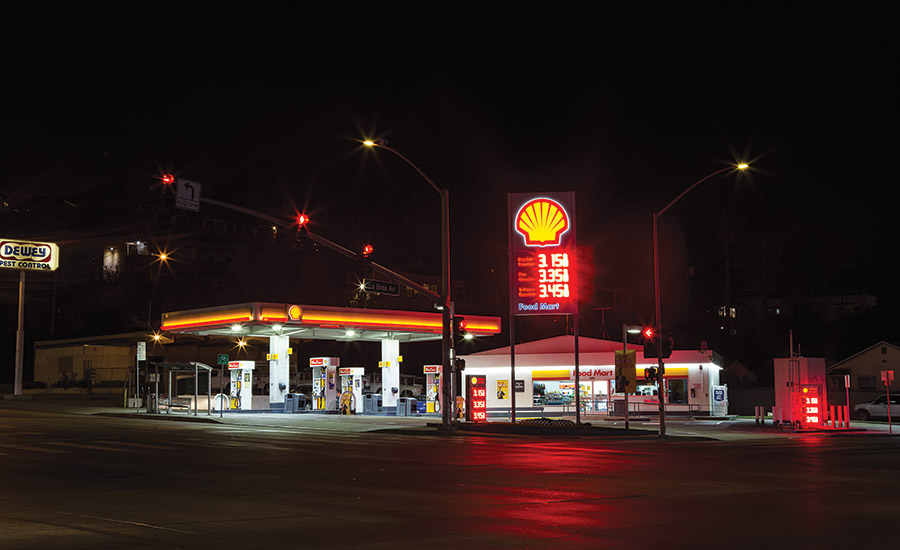 That said, “it’s easiest to make a preservation case for the ones shaped like pagodas or airplanes,” says Paul Lusignan, a historian with the National Register of Historic Places. “And Route 66, in particular, has a loyal public following, committed to the preservation of its roadside structures of all kinds.” Of course, not all former gas stations are visually or culturally remarkable. And many have languished, deserted for decades, often due to costly toxin-remediation demands for aging underground storage tanks. As far back as 2004, the Environmental Protection Agency (EPA) estimated that, of 200,000 petroleum-contaminated vacant sites in the U.S., most were former gas stations. Some states offer funding for certified cleanup, but often with significant hurdles. Another reuse challenge, especially in dense cities, can be small and awkwardly shaped lots.

Yet architect Jeffrey Inaba of Inaba Williams sees value in keeping old gas stations, particularly in poorer neighborhoods, where they tend to double as ad hoc social hubs. He presented his firm’s “Station to Staytion” proposal last December at “Pump to Plug,” a virtual symposium at the University of Southern California, hosted by Christopher Hawthorne and focused on designing for the transition to EVs. “Station to Staytion” would further develop filling stations as community gathering spots for underserved areas, with integral retail and connections to municipal bicycling and mass-transit infrastructure. (By not breaking ground, or otherwise disturbing the soil, the architect believes, such a project would legally bypass California’s remediation requirements.) These venues could offer healthy resources, such as produce markets, to low-income populations, potentially “turning an environmental threat into a wellness amenity.” (In its fitness and well-being focus, the proposal recalls “Getting Pumped,” a 2018 scheme by Gensler, with Reebok, for transforming defunct gas stations into workout facilities, with rooftop running tracks, spas, farm-to-table dining, and more—but Inaba’s ideas for such sites go further in their social purpose.)

In financially struggling neighborhoods, Inaba points out, “most people may need to defer the expense of replacing their gas cars as long as possible. So it will be important to keep the stations operating longer to help sustain those communities” and their mobility. Fuel pumping would remain at these spatially flexible hybrid and reprogrammable sites, gradually getting phased out as the need diminishes.

The complete switchover to EVs—and total obsolescence of fossil-fuel stations—will take years, and drivers of functional combustion-engine cars, from many sorts of backgrounds, will lack the means or desire to upgrade right away. “But, eventually, it will become harder to get gas the way it’s now harder to get charging,” says Hodgetts. “The tables will turn, increasing the incentive to switch over to electric vehicles.”

With rapidly evolving technology, extremely fast charging (XFC)—able to refill a battery within 10 minutes—is on the horizon. For now, powering venues need to remain adaptable. When a full charge becomes as quick as a gasoline fill-up, the conversion of existing stations to electric might actually become a good fit.

“You need to look at all the emerging companion technologies and lifestyle changes—like ride-sharing, declining car ownership, and even automated vehicles—that are developing simultaneously,” observes Hodgetts. So much is in flux. Meanwhile, the automotive industry is revving up for a major turn in the road—but America’s love affair with the car (and its trappings) may be far from over.