Hugh Newell Jacobsen grew up wanting to be a painter, which may explain the almost surreal flatness of much of his architecture. On the outside, his buildings lacked overhangs; on the inside, there were no moldings, baseboards or trim. Yet their familiar forms—often suggesting Monopoly houses—made traditionalists happy, helping Jacobsen, who died on March 4 at 91, find a middle ground between the modernism of his mentor, Louis Kahn, and the older architecture he admired. “You must never flex your muscle to destroy the progression of the street,” he told his son John, in a 2010 video interview. “Good architecture never shouts at its neighbors.”

That’s one reason he broke large houses into smaller volumes, sometimes grafted onto each other in ways that would never have worked without his extraordinary attention to detail. A house in Lancaster, Pennsylvania, completed in 1981, consists of portions of seven idealized Georgian dwellings, each slightly bigger than the next, arranged in a continuous, telescopic form. (If that wasn’t surprising enough, the largest gable end was a mirrored glass window, 42 feet high at its peak.) 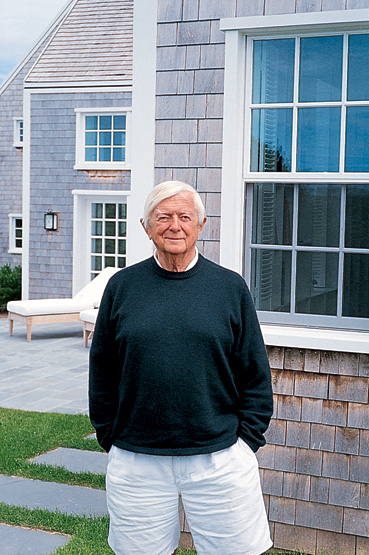 Over the years, his instantly identifiable dwellings were featured in Record Houses at least 19 times, often making the cover of the magazine as well. He certainly was not (as he was sometimes called) a postmodernist, given that his approach was already evident when he opened his office in the Georgetown neighborhood of Washington in 1958. He was, however, a regionalist. When designing in a part of the country that was new to him, he would identify the local vernacular, which he would then, he said, “clean up” and “abstract.”

Though their forms were modest, the houses were luxurious. His clients included Jaqueline Kennedy Onassis, for whom he designed a compound on Martha’s Vineyard (“It was bizarre; the plumber held a press conference,” he said in a 1984 interview); philanthropist Rachel “Bunny” Mellon; King Hussein and Queen Noor of Jordan; and Meryl Streep.

He also renovated the Renwick Gallery and the Arts and Industries Building of the Smithsonian, and created office space under the West Terrace of the U.S. Capitol. Among his university projects, the 2005 addition to the Fred Jones Jr. Museum of Art at the University of Oklahoma consisted of 10 pavilions with pyramidal roofs, each 30 feet square and clad in Texas limestone. Its tight organization and application of luxurious materials to basic forms owed debts to Kahn and Philip Johnson.

Born in Michigan, Jacobsen grew up in Washington and studied art at the University of Maryland. But his father talked him into trying architecture and he enrolled at Yale, where  Kahn was the teacher who influenced him most. “When I’m trying to make something out of nothing I can hear him,” he said in the 2010 interview. He said he never presented clients with alternative schemes, citing Kahn’s pronouncement that “if you have two designs you don’t have one design.” After  a stint at the Architectural Association in London, he went to work for his Yale thesis advisor, Philip Johnson. But Johnson fired him, his son Simon said, because he wasn’t good at producing construction drawings. He returned to Washington and tried working for several firms there but quickly went out on his own. Deeply opinionated, in 1965 he published A Guide to the Architecture of Washington, D.C., omitting several prominent buildings because they didn’t meet his standards.

Early on, he worked on renovations of historic buildings, including, eventually, more than 100 houses in Georgetown. Then, commissions for new houses started rolling in. Jacobsen, a bon vivant, loved the work and the life it afforded him. As he said in the 2010 interview, “I feel sorry for anyone who’s not an architect.”