A selection of projects in progress from around the world provides a glimpse of what’s next for the skyscraper. Read on to learn about eight tall buildings on the rise in Amsterdam, China, Malaysia, the Middle East, and across the U.S.

Adrian Smith and Gordon Gill, architects of some of the world’s tallest buildings, are lowering the height but not their sights with Una, in Miami’s Brickell neighborhood. The 47-story waterfront residential tower is Brickell’s first in over a decade, slated for completion in 2023. The architects have designed the interiors as well as the exterior, inspired by the curves and opulent materials of classic yacht design. “It stands contrapposto, where one side of the building is holding its full weight and the other side is relaxed, looking at you. I like that attitude,” said Gill in a press statement. 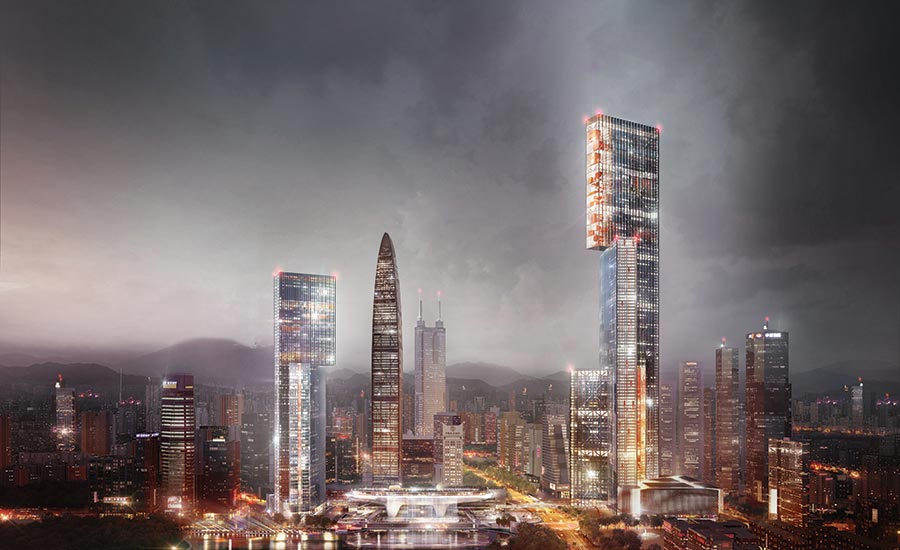 Work on the Nexus, in China’s Pearl River Delta, designed by London-based PLP Architecture, is paused, but the hope is that it will resume soon. The 1,969-foot-tall 124-story office and hotel tower (at far right in photo)—part of a complex of four PLP buildings in Guangzhou’s central business district—consists of three slab volumes of different heights, balanced on top of each other. The lower volume responds to the park nearby; the middle zone faces the urban context; and the upper component, perched dramatically askew, is oriented to the mountains beyond the city. 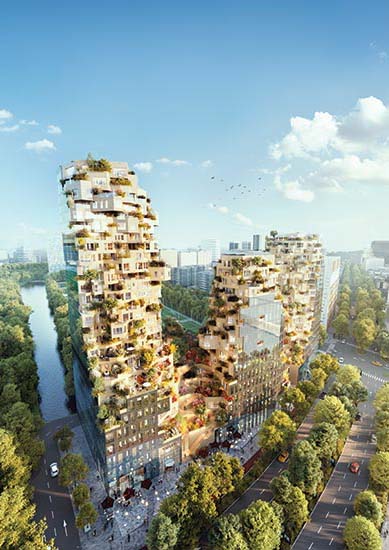 The three “peaks” of MVRDV’s mixed-use Valley in Amsterdam look as if they were carved out of a mountain of glass, stone, and steel. Topping out at 338 feet in December 2020, Valley should be completed by the end of this year. Containing retail, offices, and apartments, it has a pedestrian path that winds around the exterior of the central tower, while the buildings’ inner facade features craggy terraces and gardens (right) by Piet Oudoulf. 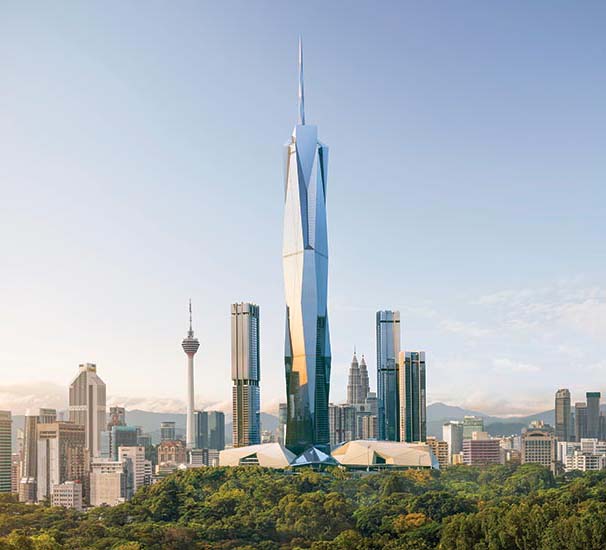 As of this March, the concrete core of this 118-story tower in Kuala Lumpur, Malaysia, had reached its peak, and the diamond-shaped, faceted glass facade was completed to level 101. Designed by Melbourne-based architect Karl Fender of Fender Katsalidis, Merdeka 118 will be the world’s second-tallest tower at 2,113 feet, behind Dubai’s Burj Khalifa (2,717 feet) and will surpass the height of its fellow city resident, Petronas Towers by Cesar Pelli (1,483 feet). Arup, which has led the structural, civil, and geotechnical engineering, conceived three multistory-deep outrigger zones to achieve structural stiffness with high resistance to wind loads. 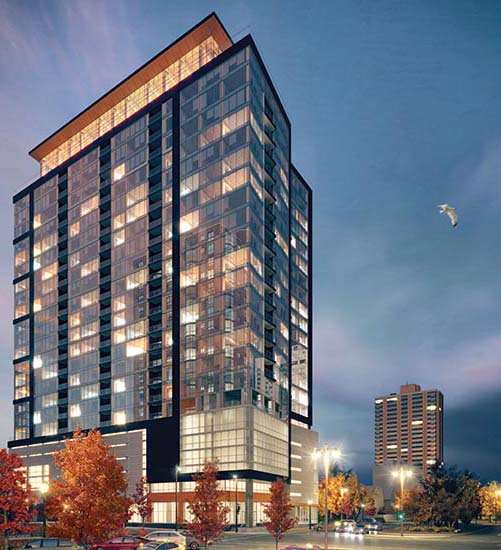 For perhaps one hot minute, this 25-story residential building in downtown Milwaukee will be the tallest mass-timber tower in the world when it is completed in 2022. Wood structures have been on the rise for several years, due in part to new technology that uses cross-laminated timber (CLT) and glulam to create fire- and earthquake-resistant structures that store carbon and can be prefabricated off-site, slashing construction time. Designed by Korb + Associates Architects, with structural engineering by Thornton Tomasetti, the base, elevator core, and stair shafts of the 259-unit building will be concrete. 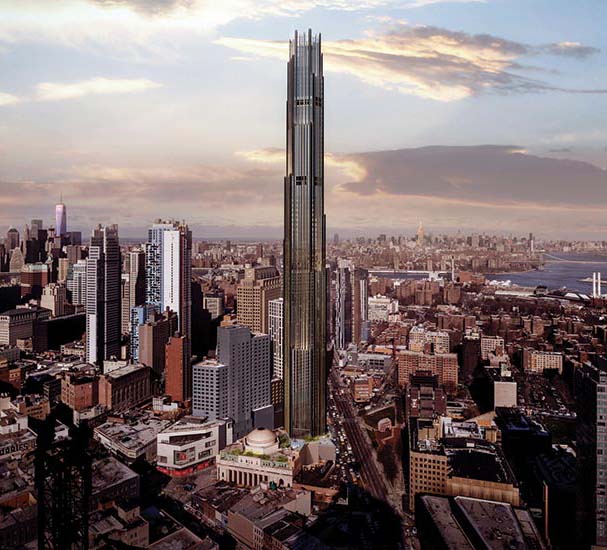 At 1,066 feet, SHoP Architects’ 9 DeKalb will be Brooklyn’s tallest building when it is completed in 2023. The residential supertall will reach 73 stories, containing 425 rental apartments and 150 condominiums. The hexagonal glass tower, which tapers as it reaches skyward, is clad in repeating vertical architectural profiles made of bronze, creating a gothic look that complements the Brooklyn Dime Savings Bank, an adjoining landmark of the City Beautiful era. SHoP is also restoring the bank as part of a new midblock connection for pedestrians between busy Flatbush Avenue and Fulton Street. 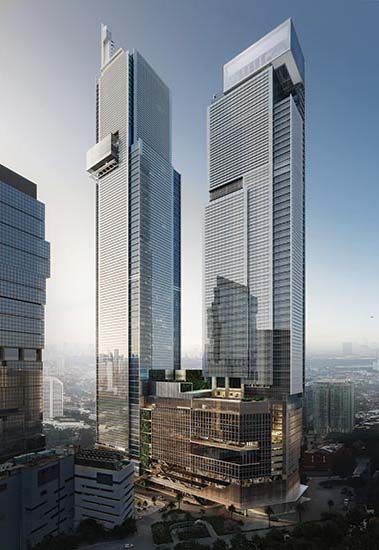 When completed later this year, the 1,256-foot-tall Autograph Tower, designed by Kohn Pedersen Fox (KPF), will be Jakarta’s first supertall, and the tallest building in the Southern hemisphere. Located in a mixed-use development between Old City and the central business district, the Autograph features offices, apartments, and a hotel. It shares a podium with the KPF-designed Luminary tower (to the right in photo), slated to be operational in 2022. Both buildings have pinwheeling glass planes and observation decks. 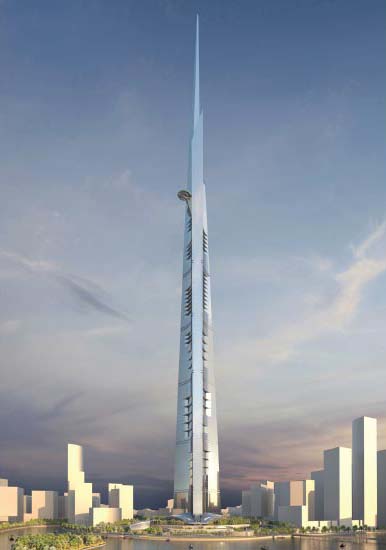 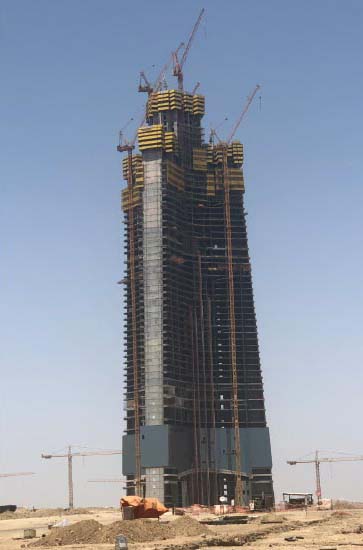 With the Jeddah Tower in Saudi Arabia (formerly known as the Kingdom Tower), Adrian Smith of Adrian Smith and Gordon Gill Architecture was set to steal the crown for designing the world’s tallest building—from himself. Smith was in charge of the current record holder, the 2,717-foot-tall Burj Khalifa, in Dubai, while a partner at SOM. But construction of the 3,280-foot-tall Jeddah project stalled in 2018, at about 60 stories. In a talk hosted by the Skyscraper Museum in early March, Smith said the pandemic caused another setback. “We hope it gets going. We’ve been told it is going to happen. It is just a matter of time and circumstances,” he said.