The Way They Sway

What causes billionaires to get dizzy in supertall and megatall towers? Is it the price tag or the side effect of dwelling so far off the ground? Is the public smirking about the correlation between price and altitude? Here is a deep backgrounder for those architects, urbanists, and the concerned public who wonder about the up and down sides of this race to the top of the world.

Historically, skyscrapers have been mostly commercial buildings, where companies lease space and build it out for their needs. But in the past decade, residential towers have started to rise to staggering heights in Midtown Manhattan and other parts of the city—and the globe—but with repercussions. The New York Times recently reported big problems and angry rich people at 432 Park Avenue, designed by Rafael Viñoly Architects and currently the tallest occupied residential building in the western hemisphere, according to the developers. Residents there have complained of mechanical malfunctions and acoustical discomfort—creaking walls, whistling sounds—as well as swaying and even stalled elevators, all because of the wind.

Dampers are not required by code (although 432 has two) but are considered essential: supertall towers can sway as much 3 feet in on each side.

When the late Leslie Robertson, the structural engineer for Minoru Yamasaki’s 1,368-foot-tall World Trade Center (1973), found out that sway caused motion sickness for occupants of tall buildings, he and his team installed viscoelastic dampers between columns and floor trusses. These dampers reduce unwanted vibrations by converting kinetic energy into heat. (Hat trusses on top of each twin tower promised stiffness.)

Now dampers have become an invisible amenity, after wine cellars and dog showers, as potential buyers begin to seek assurances that their lofty perches will not sway in the wind. While that problem can be reduced, the publicity has increased awareness of the drawbacks of living high on the hog.

So why aim for the stratosphere? The short answer: Profit. The longer answer: continued profit. In recent decades, the evolving economics of building tall began to influence real-estate, financing, regulatory, and planning decisions. Scarcity of large plots and escalating land prices forced developers to recalculate their business models. The logic is straightforward: buildable lots are fewer, smaller, and more expensive. To be profitable, developers have to sell units at an exorbitant price per square foot, which isn’t appealing to commercial tenants, who lease rather than buy. But ownership is supposedly an investment for wealthy buyers. And having a $100 million penthouse in a supertall with a view of everywhere has a cachet only money can buy. Helpful to business is certifiable height.

The Council on Tall Buildings and Urban Habitat (CTBUH), founded in 1969, developed international standards for measuring tall buildings and is recognized as the arbiter for bestowing such titles as the “World’s Tallest Building.” For the CTBUH, “supertall” is defined as 300 meters high (almost 1,000 feet) or more, while “megatall” rises about 600 meters (almost 2,000 feet).

Aggressive advancement in the fields of materials science and engineering have offered developers new opportunities to reach higher. The strength of steel and concrete has increased dramatically, which means, for example, that the thickness of concrete walls can be reduced. This new era of extreme height and thinness so far has been applied mostly to residential rather than commercial towers, at least in the United States, although countries in the Middle East and Far East are betting on extravagant mixed-use towers.

While developers’ fixations on height supremacy still dominate, they are now incorporating the slender quotient, known as the Aspect Ratio Challenge. Simply put, the slenderness of a tall building is the quotient of its width to its height. Structural engineers generally consider a skyscraper to be slender if the ratio exceeds 1 to 10 or 1 to 12. 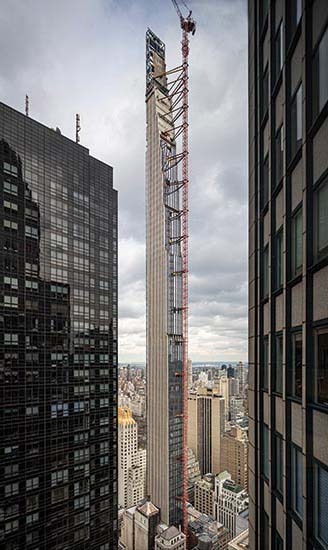 But you can never be too rich or too thin. The residential tower at 111 West 57 Street in New York, enabled by the developer’s purchase of the air rights from the landmark Steinway Hall (designed in 1925 by Warren & Wetmore) will have a width-to-height ratio of 1 to 24. Surpassing the previous tallest residential tower, 432 Park Avenue, which has a ratio of 1 to 15, it will be one of the highest in the U.S. and also the thinnest skyscraper in the world. Conceived by New York-based SHoP Architects, the tower’s northern elevation rises directly up to the pinnacle. But the southern elevation “feathers” its setbacks as the tower rises, shrinking the tower’s footprint on higher floors. Because of the stepped profile of the pinnacle, 111 West 57th Street is nicknamed “Stairway to Heaven.”

The engineering firm WSP, a global leader in delivering super-slender towers, has worked on many of the new generation, including SOM’s One World Trade Center (2014), 432 Park Avenue (2015), as well as the soon-to-be-completed 111 West 57th Street. Obviously, a stiff and strong structure is needed to endure wind and seismic forces. 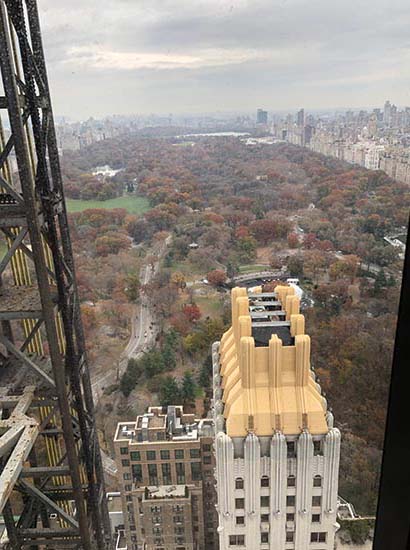 By designing two shear walls on the east and west elevations, WSP has achieved the necessary stiffness, while allowing clear views to Central Park on the north and lower Manhattan to the south. The tuned mass damper is located above the highest occupiable floor of the concrete structure and below the lighter steel cage that supports the tower’s classic Manhattan finial.

Will the goal of megatowers still be “the sky’s the limit” after the Covid pandemic shut down the planet? CTBUH reports a 20 percent decline in 2020 for buildings 200 meters and taller. And yet, optimism (or ambition) does not appear to be dampened. In the end, limitations will come from issues regarding livability. What are the political, social, and economic ramifications of having it all or having only a small piece of it? Is anyone thinking about it?