In an age of flat business organization and collaborative work environments, the imposing office lobbies of 1980s-era Washington, D.C., feel as dated as big hair. At 1300 Eye Street NW, known as Franklin Square, Hickok Cole transformed the ultimate power-broker lobby into a front door for our time. The existing 22-foot fluted columns, coffered ceiling, and shiny marble floor that could have been extracted from a John Grisham thriller were in fact conceived by Philip Johnson when he designed the 1989 Postmodern building. As Hickok Cole principal Rob Holzbach describes the recent renovation, “The lobby is liberated from its previous inward-facing intensity and now reorients itself to the streetscape.” 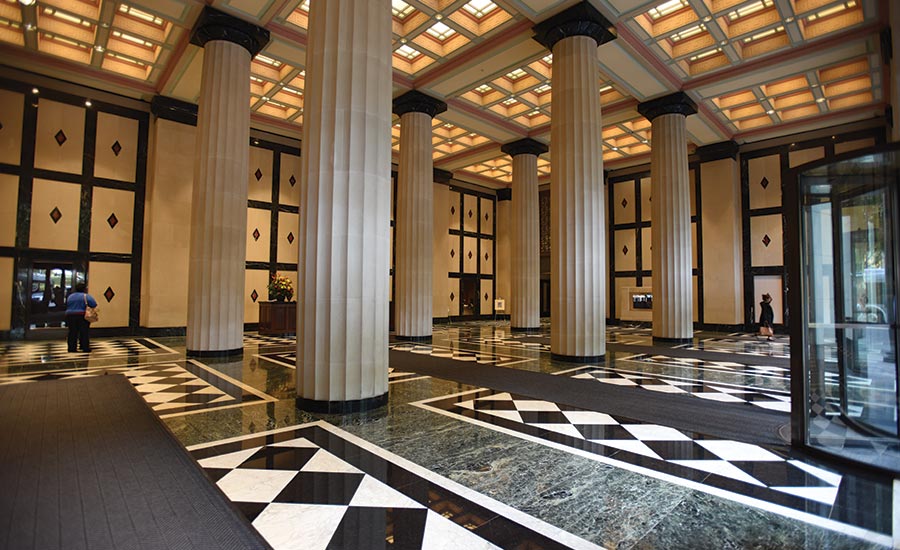 Johnson had inset the building’s double-height entrance under the third-story floorplate and crowned four bays of doors in grillwork, alternating the bays with as many canopies over the sidewalk. To better integrate Franklin Square into the urban fabric, Hickok Cole undid the original portal-like experience by replacing the bronze grillwork with a custom glass wall system aligned to the third floor’s edge. The strategy shifts the entrance nearer to the city’s foot traffic and maximizes sight lines between occupants and passersby. It also increases daylight in the interior, where the marble floors are newly honed to reduce glare. 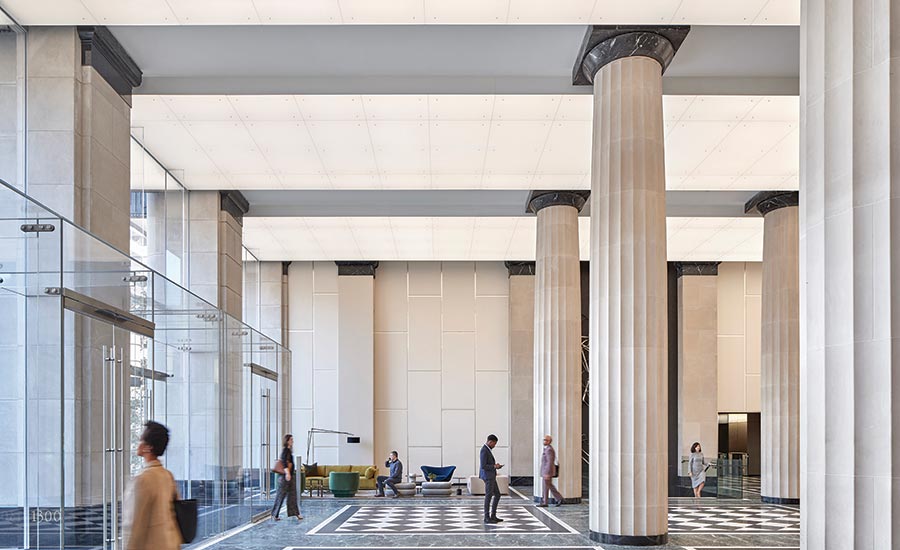 That solution replaced the myriad coffers overlooking Johnson’s entrance. Hickok Cole senior associate Bertin Radifera recalls that swapping coffers for ribbons “was an easy decision. The original grid was a little fussy, and the high hats installed behind the coffers didn’t properly light the space.” To achieve uniform illumination, the designers specified LED sheets with a typical diode spacing of 1 inch on center, and placed these in a precisely calculated airspace behind a ½-inch-thick diffusion-layer of glass with satin etching. The sheets have different orientations, based on their location within the ribbon, so that the glass surface is lit from edge to edge without hot spots. Additional LED strings were placed within the assembly, where necessary, to eliminate shadows. 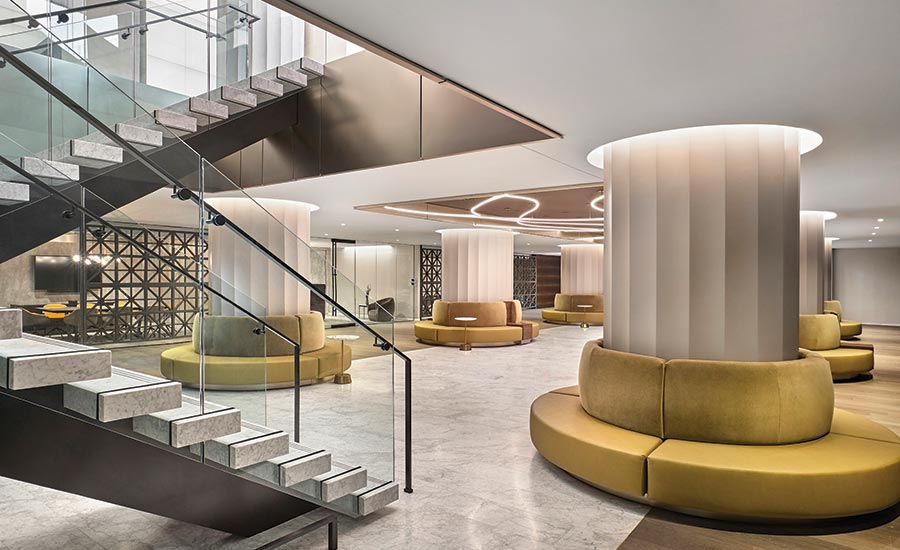 Cove-lit piers on the concourse (above) mimic Johnson’s fluted columns and appear to extend through the floor. Photo © Garrett Rowland

The ribbons are powered by the ceiling’s existing energy source, but the project team had to place coordinating controls and drivers within reach of building managers. Electrical- supply panels hidden within each side of the lobby provide that access. The entire system is DMX-controlled and dimmable per panel, and lighting intensity cycles through a series of preset scenes during the day. Manual and sensor-triggered overrides adjust brightness according to daylight availability. 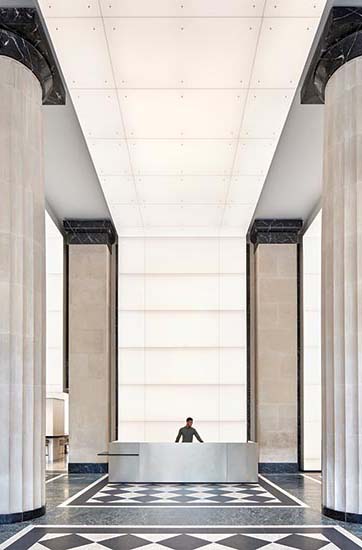 In addition to making an urbanistic statement to the surrounding neighborhood, the ribbons draw Washingtonians into Franklin Square, where they will find that Hickok Cole’s modernization stretches over 31,000 square feet of now-public interiors. The effort introduces new functions to an expanded lobby area, most notably lounge seating, a café, and lower-concourse-level conference facilities. Architectural gestures correspond to the programming changes: two new slab openings foster visual connections between the lobby and downstairs, for instance, and cove-washed pillars in that concourse appear as if extruded from Philip Johnson’s towering columns overhead. What was once a corporate fortress now feels more like a city within the nation’s capital.