“We were looking for signs of hope and optimism, and we found a lot of it,” says Hashim Sarkis, Dean of the School of Architecture and Planning at Massachusetts Institute of Technology, describing his quest for projects to exhibit as the curator of the twice-delayed 17th edition of the Venice Architecture Biennale, which opens to the public on Saturday. “At this moment, we are tired of dystopias,” he adds. “It is important to be reminded that the future might not be rosy, but maybe once you are in [a dystopia], you want to get out of it as quickly as possible.”

During the preview this past week, Venice has been strangely quiet and, but for the presence of security guards wielding infrared thermometers at the entrance to palazzi, relatively calm with many of the Biennale opening rituals — the packed parties and the awards ceremony — postponed until later in the summer. The shows themselves become the focus. Fortunately, what Sarkis has delivered in exhibitions for the Biennale’s two main venues, the Arsenale and the Central Pavilion in the Giardini, are an act of considered curation and analysis of the state of architecture that hits the perfect note in a world half-emerging, half-suffering from a pandemic. 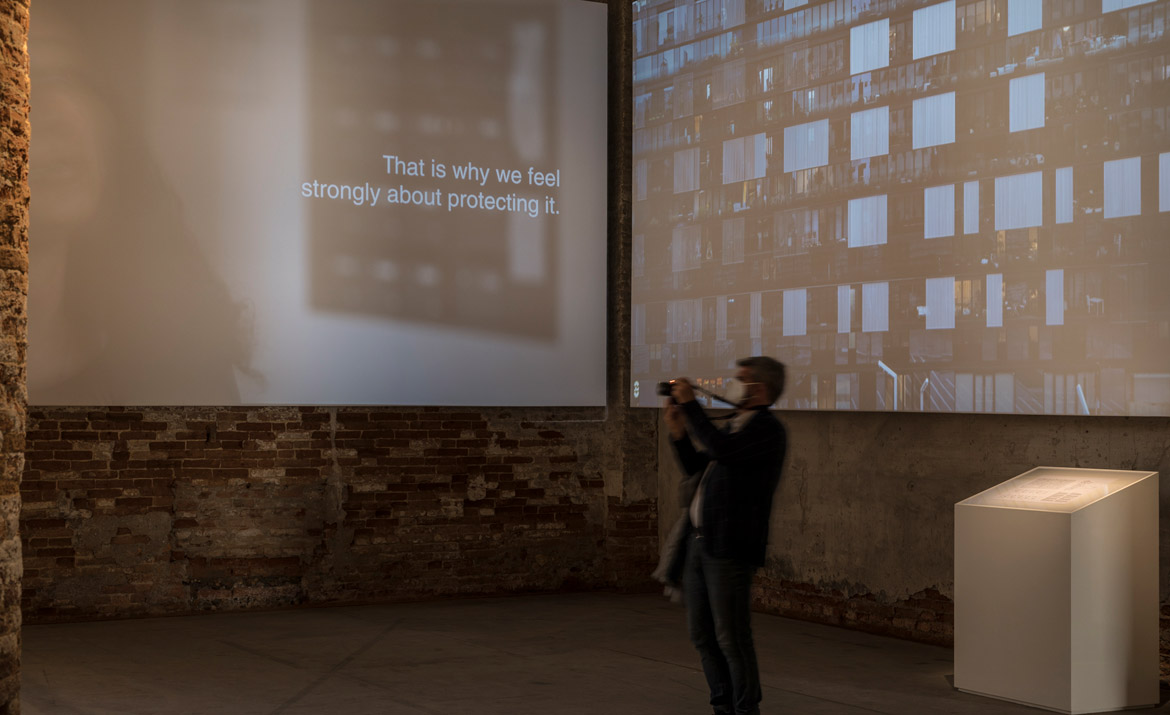 In the past, the sheer scale of the Corderie at the Arsenale has thwarted curators, as promising strategies became repetitive somewhere down the 1,040-foot long space. That was the case with Kazuyo Sejima and Ryue Nishizawa in 2010 and with earlier curators’ installations as well. The quality of individual works suffer in the overwhelming volume of the former rope factory, as was evident in 2018, too, when Yvonne Farrell and Shelley McNamara of Grafton Architects were the curators: the frequently delicate models seemed to shrink beneath the sheer weight of the loftly, continuous space.

Sarkis’s success is predicated not just on optimism but on a progression that is both spatial and thematic. The exhibition – whose theme this year is “How Will We Live Together?” – begins with an investigation into the body. Six gloves from spacesuits, delicately lit, speak of a very intimate architecture, conveying both man's ingenuity and his fragility. The installation was designed by modem, led by MIT Head of Architecture Nicholas de Monchaux and Kathryn Moll.

Upon entering the Arsenale, the first room is also populated by a series of fiberglass and resin sculptures by Nigerian artist Peju Alatise of figures transformed by different objects such as bowls and fabrics, or constituted from smaller figures. The effect is both hideous and beautiful. In ascribing this crisis of identity to new technologies, which both displace us and allow us to modify who we are, Sarkis, perhaps wisely, ignores the controversies around identity politics. Still, in acknowledging that our sense of self is in a state of flux, he ingeniously foregrounds the exploration of communal architecture to come. 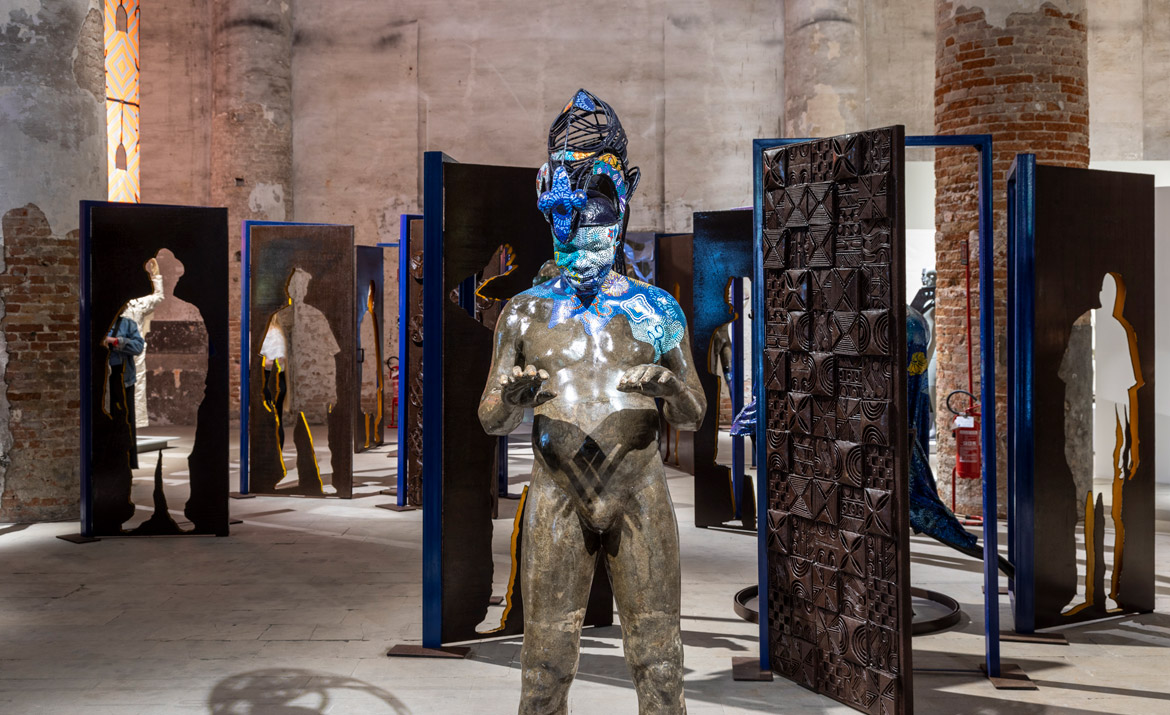 When we describe contemporary life as precarious, we often mean economic uncertainty. Yet Sarkis sees another kind of instability – and the opportunity for more elastic social relations and an ambitious new architecture to embrace it. Yes, the dystopian body alterations are alluded to. (Sarkis shows Parson and Charlesworth’s satirical Clickbaitwear, which is a helmet wrapped in an LED billboard that proclaims inane influencer slogans.) However, the condition of uncertainty also allows us to conceive of new means of relating to our fellow humans. In one of the installations, an audio interview with the 1960s counterculture thinker and builder Lloyd Kahn is accompanied by models recently created by the contemporary Swiss architect Leopold Bianchini that are clearly influenced by the lightweight structures first published in the Whole Earth Catalog.

But the show is not just interested in this moment as a willful return to an earlier avant garde or counterculture but as a model for the elasticity of human relations. One of the more modest pieces on show is a film of Farshid Moussavi’s mixed-use project in Nanterre near Paris, with  private apartments, student lodging, and commercial and public spaces. It is a fascinating building, with apartments arranged so they are accessed vertically with elevator and stairs only serving a pair of apartments. Inhabitants can choose to ignore their neighbors or meet with them. Share space or be private. Multiplicity and complexity are not shied away from, Sarkis suggests, here and elsewhere. 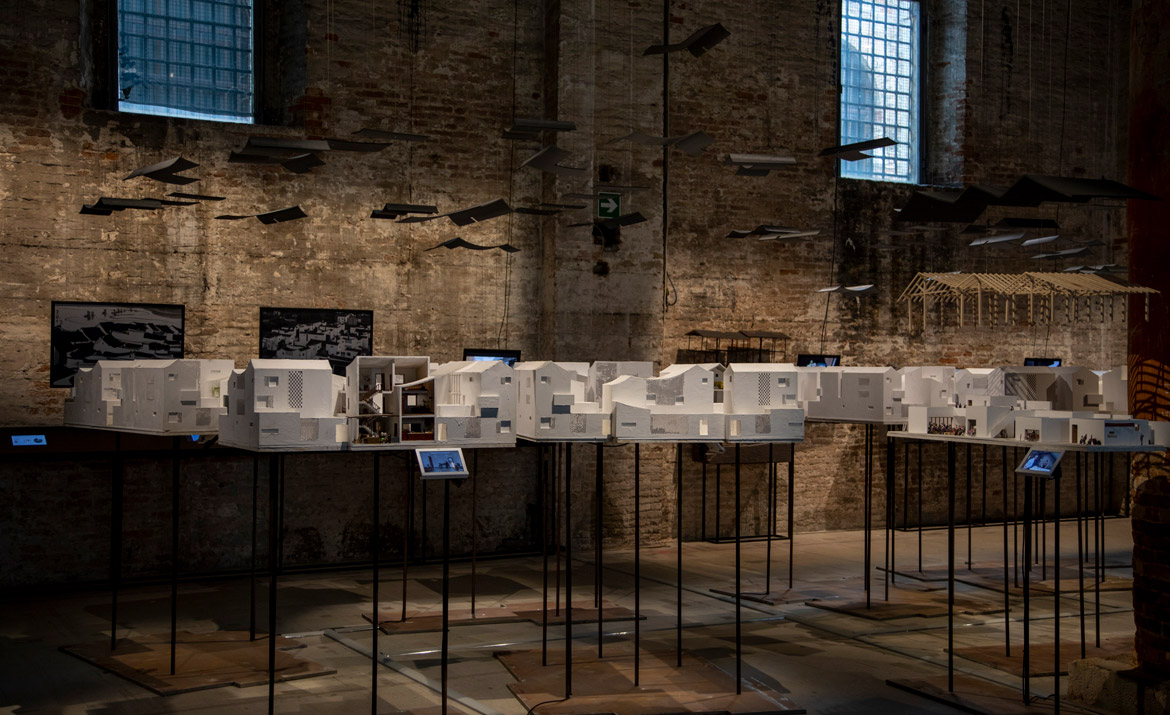 Nearby is a beautiful model of Affordable Housing for Relocalized Farmers near Hangzhou, designed by Meng Fanghao and Zhu Peidong of  Line+, in which the meandering streets are not so much thoroughfares but public space. Even in the chaos of China’s urbanization, opportunities present themselves to create real community.

While the tenor of the show is hopeful, Sarkis has not entirely avoided the alarming prognosis of some environmentalists but he has sensibly grouped such projects in the Central Pavilion in the Giardini, alongside research and proposals that consider humanity from a global perspective but don’t have imminent demise as the end point. If imagining an environmental apocalypse in the near future is a feature of contemporary culture, the logic of Sarkis’s exhibition suggests it is just one aspect of a wider global thinking. DESIGN EARTH’s The Planet after Geoengineering, which takes total disaster as a given, sits next to more optimistic visions, such as Richard Weller’s proposal for a global park from the perspective of Apollo 11.

Sarkis’s curated shows in the Arsenale and the Central Pavilion will not satisfy those in search of a room full of the most current architecture—or futurist visions.  What visitors will get instead is an exploration of our built environment that comes with a beguiling message of hope.

Further dispatches from Venice on Architectural Record will focus on the work in the national pavilions in the Giardini.