Venice seemed becalmed this year. Like so much of the world, the city was quiet, waiting for life to begin again. In May, during the much-delayed opening of the Architecture Biennale, there were only a handful of tourists, mostly Italians. The 50,000 Venetians who live on the island had their city to themselves, yet an air of melancholy hung on the empty piazzas. Few visitors came to the Biennale: the Dutch curators popped open some bottles of prosecco to celebrate the debut of their pavilion, but that was the limit of the partying. Exhibitors were relieved that at least some people would see their work, although the concern that the audience might remain small for this global architecture event was never far away. 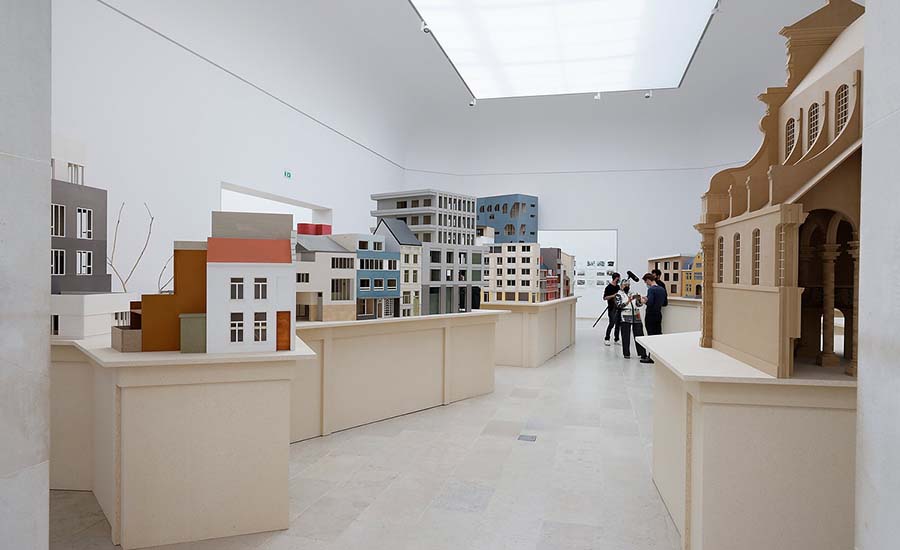 And that would be a huge shame. For while Venice felt adrift in the present, the Biennale itself had a strong sense of either recent history or the need to plan for our future. The best national pavilions displayed a nuanced reflection on recent populist movements, either the socioeconomic version, in which the working class has been pitted against elites, or a more cultural form, which has focused on issues of national identity. The generally liberal, cosmopolitan profession of architecture has often felt at odds with a wider public, and several exhibitions addressed this head-on. 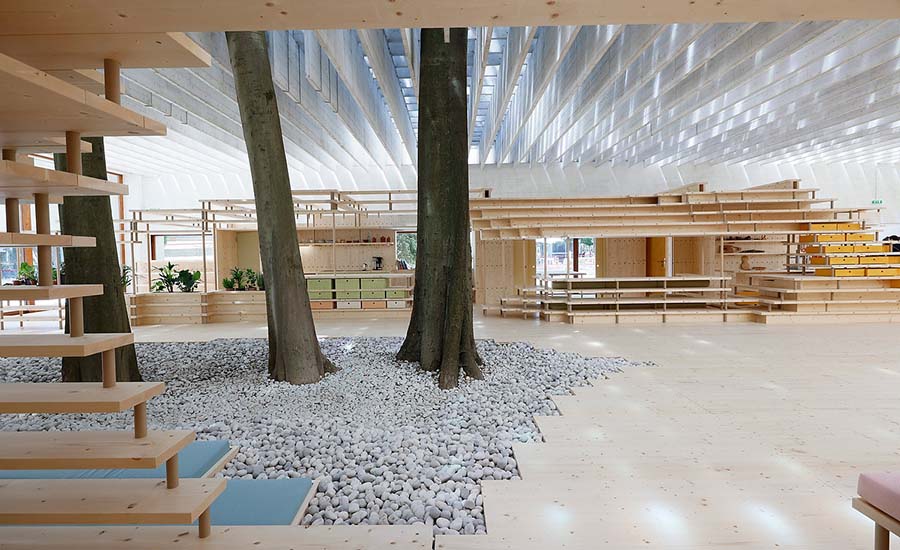 The Nordic pavilion representing Sweden, Norway, and Finland is a full-scale model of co-housing. Photo © Iwan Baan, click to enlarge.

The particularly strong U.S. pavilion represented a genuine attempt at reconciling this polarization. Curated by the architects and professors Paul Andersen and Paul Preissner, it was a triumph on several scales. A four-story hymn to timber construction— an almost Gothic structure built across the front of the 1930 Neoclassical pavilion—provided glorious views across the Giardini, the Biennale’s primary site. Inside, Chris Strong’s superb photographs captured the construction of timber housing across America.

The pictures convey an often ad hoc building industry, with the potential to be a more developed system (the sad demise of CLTtimber construction firm Katerra notwithstanding). Models made by the curators’ University of Illinois at Chicago students, of primary wooden housing types, show a profession eager to learn from the vernacular that has sheltered great swaths of American society in rural and suburban areas, when more modern building systems have not. 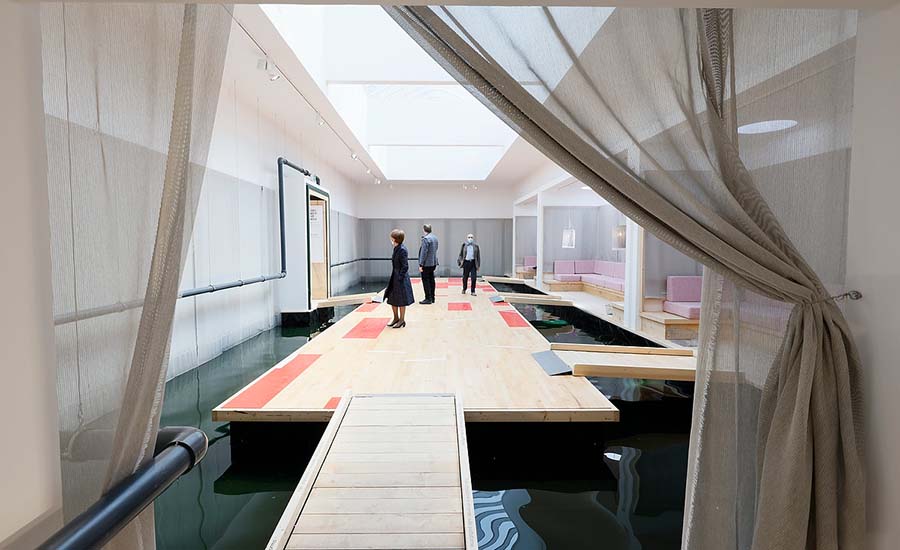 The Finnish pavilion looked at a similar typology—timber-framed building—but from a different historical perspective, with a rigorous piece of research about the Puutalo Oy, a 20th-century industrial venture for building timber houses. The company was established to deal with the displacement of 420,000 internal refugees who flooded the country from the East, following the Russian annexation of a part of Finland in 1940. Juuso Westerlund’s photography of the housing today is full of character, showing that uniform housing doesn’t mean uniform living. The Giardini was full of such excellent documentary photography, the key means for exploring forgotten quarters of society, from the immigrant populations of Romania to those who inhabit the Modernist superstructures of the past in Brazil. 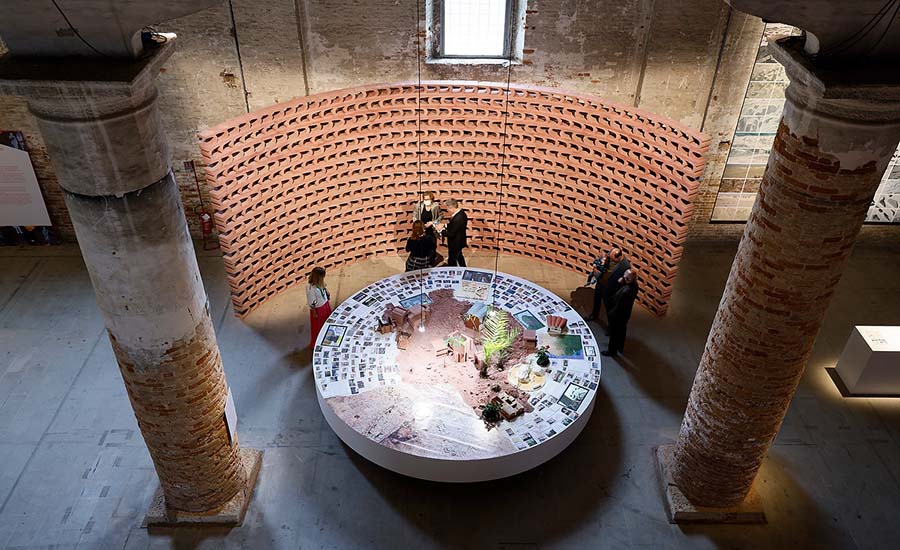 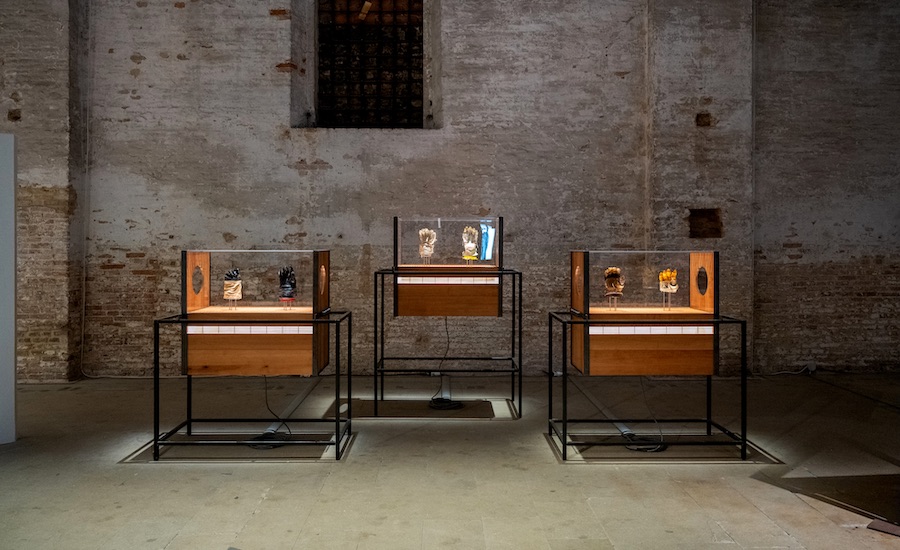 The real stars of the show, though, were not the national pavilions but the main exhibition in the Arsenale (the Venetian munitions factory originally built in the 12th century) and the Central Pavilion of the Giardini. Curated by Hashim Sarkis, dean of the School of Architecture and Planning at MIT, these installations, around the theme “How Will We Live Together?”—finely tuned in the extra year the curatorial team were granted due to the Covid delay—consider the future of architecture in a complex yet more hopeful approach than the jaundiced views of the field that we’ve seen in recent Biennales.

When Vittorio Gregotti became director of the Venice Biennale, in 1976, he instituted for the first time a system whereby the art biennale alternated with the more socially purposeful medium of architecture. His first Architecture Biennale, in 1980, expressed the theme “La presenza del passato” (the Presence of the Past)—and was perhaps the only time the Biennale has transcended the temporary event and entered the narrative of architectural history.

In the just-refurbished Arsenale, he installed a historicist, Postmodern “street,” with a string of facades down its length, by Frank Gehry, Rem Koolhaas, Hans Hollein, and Ricardo Bofill, among many others— a stunning work that is impossible to avoid when discussing the theatrical quality of Post-modern architecture. In a profound irony, “La presenza del passato” has dogged the curation of subsequent Architecture Biennales, encouraging curators to formulate new movements when none exist. Historical context has been used to create a comforting idea of a shared professional language, rather than addressing the real issue: where exactly should architecture sit within our society now and in a better future?

Sarkis has bravely focused on architecture’s real place in our shared culture. The show opens with a series of delicately lit spacesuit gloves, presented by the California-based practice Modem, which speak of an intimate architecture and convey both human ingenuity and our fragility in a hostile environment. 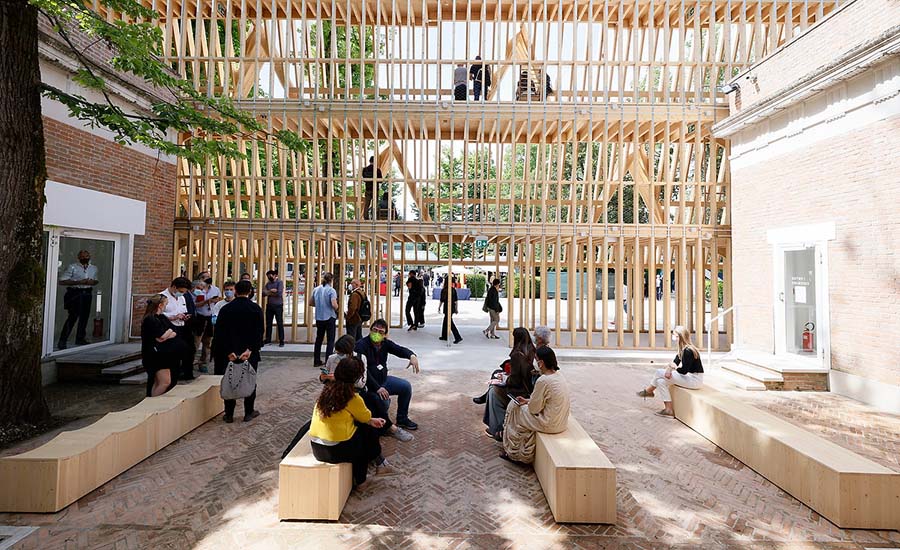 Visitors gather outside at the US Pavilion. Photo © Iwan Baan

Then, a bust of Nefertiti made of honeycomb by the Slovakian designer Thomas Libertiny, in collaboration with several thousand bees, shows how our sense of our humanity is shifting as our ideas about nature change. Our identities are in a state of flux, which Sarkis suggests is caused by technological innovations rather than by the rise of a new kind of politics. While this may be debatable, he ingeniously foregrounds the potential of a communal architecture to come. If our sense of self is malleable, are we not more open to others and hence to new ways of living?

In 1966, the British architect Cedric Price asked, “Technology is the answer, but what was the question?” The question could have been a provocation for Sarkis as he concentrates on technology as a means for problem-solving and offers architecture as both a haven from and a platform for it. It is perhaps not surprising that the MIT architecture dean is unafraid of exploring the emerging aesthetic of these new environments. Some of the results in the Biennale are unsuccessful: EcoloLogicStudio’s airpurifying and diet-supplementing algaefarming system looks like a series of shower curtains embedded with snot. Yet, nearby in the exhibition, films by Gramazio Kohler show how two buildings at the Swiss Federal Laboratories for Materials Science and Technology was built both for and by robots. The films, informed by the hypnotic, unceasing rhythm of robotic construction, possess a strange mundane lyricism and give the unsettling impression that the future is already upon us. 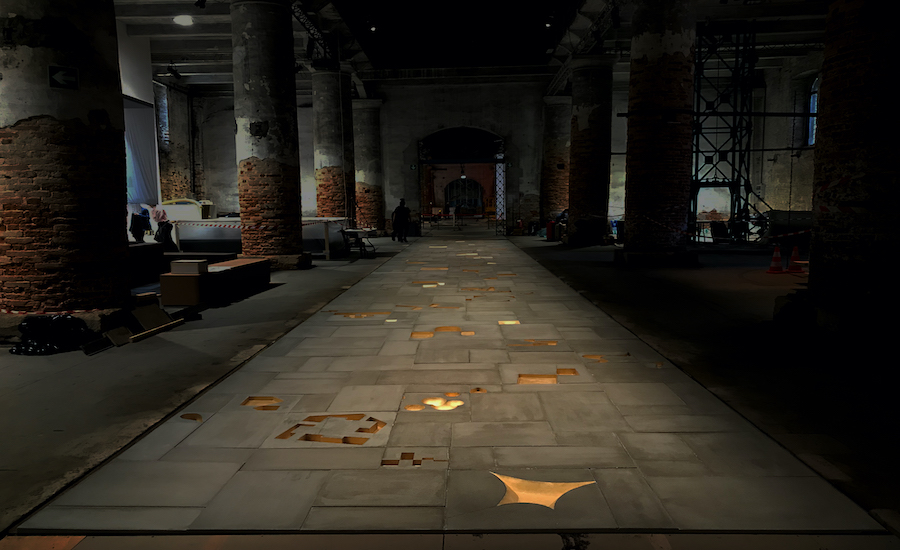 Aires Mateus made incisions into an elongated grid on the floor. Photo © Aires Mateus

Even the more conventional architecture that Sarkis exhibits—of which there is actually plenty—operates as simple social technology. One modest piece is a film about Farshid Moussavi’s mixed-use project in Nanterre, near Paris, which includes private apartments, student lodging, and commercial and public spaces. Apartments are arranged in pairs, so they are accessed vertically with elevators and stairs. Inhabitants can choose privacy or meet with neighbors, share space or not. The communal component in Aires Mateus’s work is the very ground into which its work is often dug and the design of a building begins. The piece that the Portuguese office created here is gouged into the floor of the Arsenale—a series of varied incisions, beautifully lit, into an elongated grid. These sophisticated symbols also look like the geoglyphs of the Atacama Desert, suggesting a developed cosmology and possibly an extraterrestrial audience.

While the tenor of the show is hopeful, Sarkis has not entirely avoided the alarming prognosis of many environmentalists, but he has sensibly grouped such projects in the Central Pavilion in the Giardini, apart from the more optimistic projects in the Arsenale. These stand alongside proposals that consider humanity from a global perspective but don’t have imminent demise as the end point. If imagining an environmental apocalypse in the near future is a feature of contemporary culture, the logic of Sarkis’s exhibition suggests it is just one aspect of a developing global consciousness. DESIGN EARTH’s The Planet After Geoengineering, which takes total disaster as a given, sits next to more upbeat visions, such as Richard Weller’s proposal for a global park from the perspective of Apollo 11.

Trapped as we are, like Venice, in an endless present, Sarkis’s beguiling message of hope is prescient in a way he could never have intended when he was named this edition’s curator in late 2018. We need a vibrant future now more than ever. Yet there is a profound irony that a wide international audience may be deprived of seeing it.