Las Americas Housing by SO — IL

Like many cities in Mexico, León—about 230 miles northwest of the nation’s capital—experienced aggressive, sprawling growth along its outer fringes in this century’s first decade. Much of it was fueled by a federal program, launched in 2001, to elevate living conditions for millions by creating pathways to affordable home ownership through government-backed mortgages and private development. But that initiative—tainted by corruption and investor greed—spawned endless tracts of cheaply built, nearly identical houses in Mexico’s remote urban outskirts, many disconnected from transportation, basic utilities or services, and other infrastructure. Some of those projects now lie decaying or abandoned. 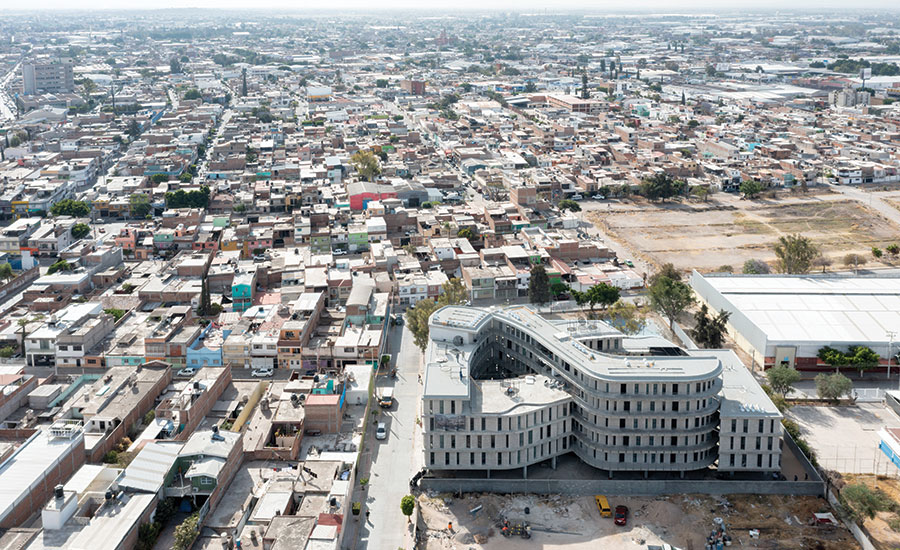 In counterpoint to the sprawl of new houses on the urban fringes, a city agency commissioned a 56-unit building in Léon’s core (above), resulting in a six-story building of variously scaled light-filled apartments (top). Photo © Iwan Baan, click to enlarge.

The industrial city of León—longtime fabricator of 70 percent of the shoes in Mexico and now central to an automotive-manufacturing region—was not among the worst-affected municipalities. Yet the construction boom along its periphery led to exorbitant infrastructure costs and critical loss of density at its core.

Hoping to catalyze the city’s regeneration and improve low-income living options, a progressive municipal agency, Instituto Municipal de Vivienda de León (IMUVI or, in English, León Municipal Institute of Living), has proposed an alternative model for affordable housing. With León’s mayor and the New York architectural firm SO–IL, IMUVI recently completed a test-case apartment building in the heart of the city’s tight-knit fabric: a sculpturally expressive structure that’s prototypical in its approach. The six-story building, called Las Americas, offers its 56 units for sale, not for rent, which isn’t uncommon in Mexico, even for lower-income housing. But what’s unusual is IMUVI’s mission to serve workers from the vast “informal economy”—street or market vendors, or freelancers—who wouldn’t qualify for traditional mortgages, even federally backed ones. At Las Americas, IMUVI is the lender. But, apart from innovative financing, how can this vertical, multifamily project offer a sense of personal ownership compelling enough to compete with freestanding houses?

“It goes beyond each owner’s four walls,” says IMUVI director Amador Rodriguez. “This is about community, within both the building and the neighborhood.” The central location is residential, if not high-end, with proximity to schools, parks, churches, a covered produce market, shops, extensive bike paths, and León’s well-developed bus system, plus other reliable existing infrastructure.

At the same time, Las Americas also offers individuality, with no two apartments exactly alike, and multiple, entirely outdoor routes linking each one to the street. Rejecting straight, oppressive double-loaded corridors (or enclosed single-loaded ones), the architects gave this corner building a modified figure-eight configuration, almost a Celtic knot, focused around two landscaped courtyards. Open to daylight and breezes, the circulation loops along the 8’s edges. With floor-to-ceiling operable windows, divided into hinged sections, every unit has cross ventilation, with both city and courtyard views. 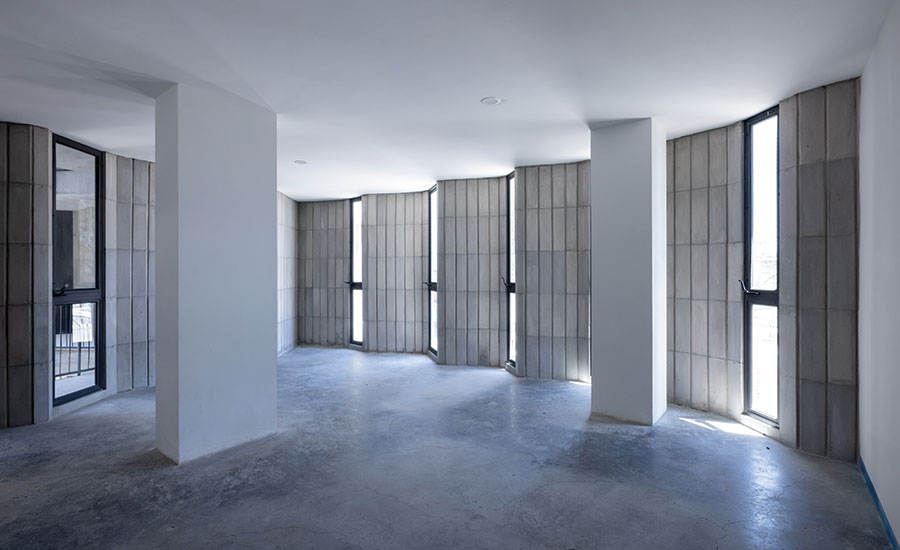 The units in this low-income development have simple concrete floors and full-length windows. Photo © Iwan Baan

The massing gives each apartment a unique “address” within the larger whole. Instead of an “anonymous, monolithic block,” says SO — IL principal Florian Idenburg, “it was important for every unit to have specificity of place.” Ranging from 527 to 1,023 square feet, with up to three bedrooms each, the airy, daylit apartments cost an average of $40,000. Among their economical features are compact open kitchens, modest-sized bedrooms, and exposed concrete surfaces throughout. While the curvy building plan and sculptural facade are outwardly expressive, they result in some quirky room shapes, many with acute angles, as well as zigzagging walls along their outer edges. Accessible units, plus two commercial spaces, are at grade.

Construction for the entire 62,614-square-foot building cost $2.4 million—less than $40 per square foot. According to Rodriguez, that’s low even for Mexico.

Ironically, SO — IL had to scrap prior plans for a similarly scaled and configured courtyard building in San Francisco, because estimated construction costs were too steep. The price tag—amped up by stringent energy codes, seismic issues, unionization, and an entirely different economy—was at least 12 times as high.

In León, one way SO — IL reduced costs was by designing for worker- rather than machinery-intensive construction, relying on inexpensive local labor. When an earlier scheme—with curving, light-scooping, vertical brise-soleil panels—demanded remote factory fabrication and crane lifts, the architects devised another solution: straighter (more tolerance-forgiving) fins, composed of concrete blocks that could be carried and installed by hand. Still, the resulting facades—with accordion-like pleats cast into the concrete’s pale gray surfaces—invite an animated play of light and shadow. Other savings came through the minimal architectural fee (“we practically donated our services,” says Idenburg) and the absence of both an elevator (a shaft exists, enabling the owners to install one later) and HVAC systems (unnecessary in this mild climate).

As for sustainability, concrete—the building’s ubiquitous structural and surface material—has undeniably high embodied-energy and -carbon costs, but there were trade-offs. This very economical option could be sourced locally. And, operationally, the building achieves sustainability through its gardens, shading fins, multiunit density, natural ventilation, and highly walkable/bikeable location.

Among the calculated compromises were questions of privacy. As in motels, fenestration lines the shared walkways, though the fins provide some baffling, and facing windows are relatively distant and staggered. But, as Idenburg points out, attitudes toward privacy are cultural, and, in much of Mexico, “people often have their front doors wide open—there’s a real connection to life on the street.” For Las Americas, his client’s recurrent question was, How do we create enough opportunities for communal interaction? Part of the answer lies within each floor’s shared patio, courtyards, and walkways. 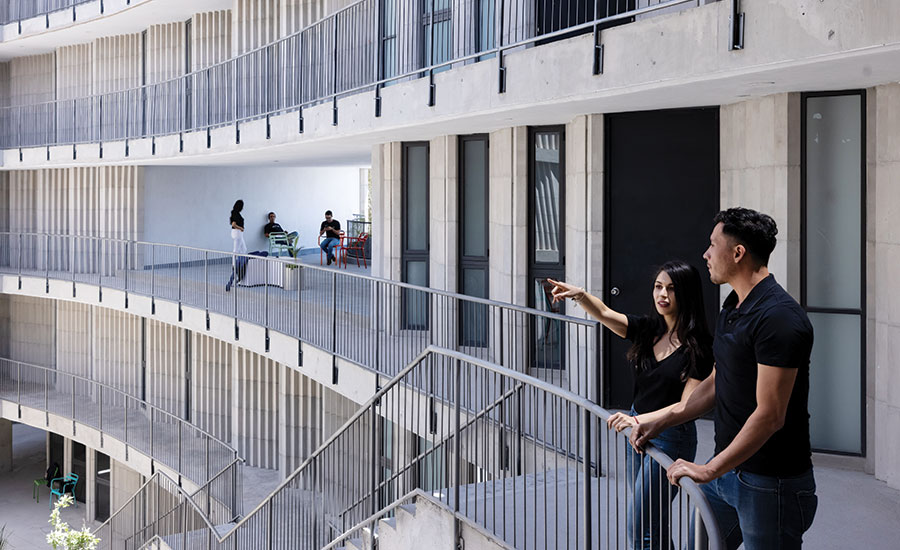 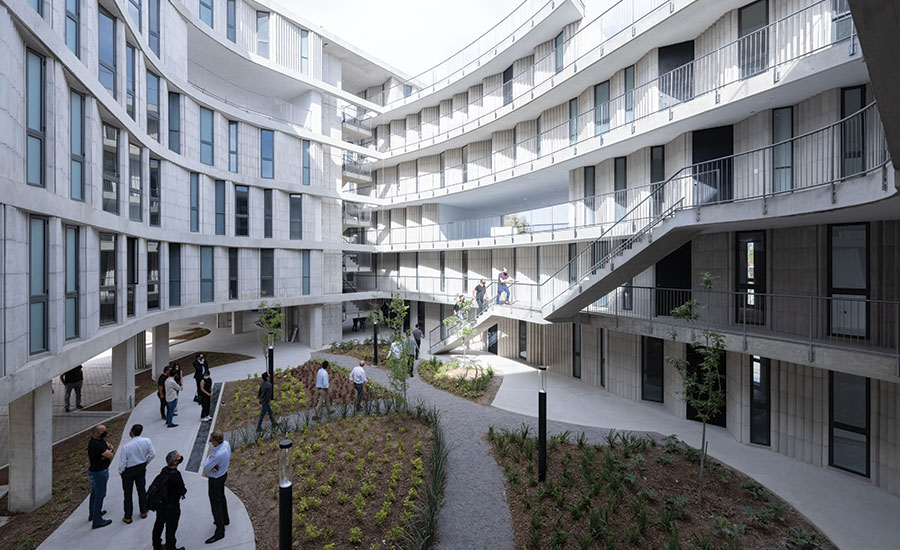 Though León is not known for architectural design, Rodriguez says, “we wanted to make a statement.” Beyond Mexico City, Guadalajara, and Monterrey, he explains, affordable high-rise dwellings are relatively rare, so the design needed to stand out as a new approach. Shortly before Las Americas opened, in May, nearly half its units were either undergoing approval or fully purchased. The project has attracted some urban, young, college-educated (though low-income) buyers within its eclectic demographic mix. The building’s first official apartment owner was a 33-year old streetside T-shirt vendor, who’s also a manicurist and single mother of a teen. “I looked long and hard for an opportunity to acquire a home—and this one fits like a glove,” she says. “It’s convenient for my son, who’s about to start high school, and for the ways I earn a living. This great responsibility makes me want to work 200 percent harder.”

“Over time,” says Idenburg, “I wouldn’t be surprised to see the homeowners transform the building with vibrant color—which will probably include their front doors, possibly the facade, and certainly their [apartment] interior walls.” If this prototypical approach catches on, Rodriguez hopes to partner with carefully chosen developers on future iterations. Meanwhile, he’s eyeing the adjacent vacant lot for IMUVI’s next project. 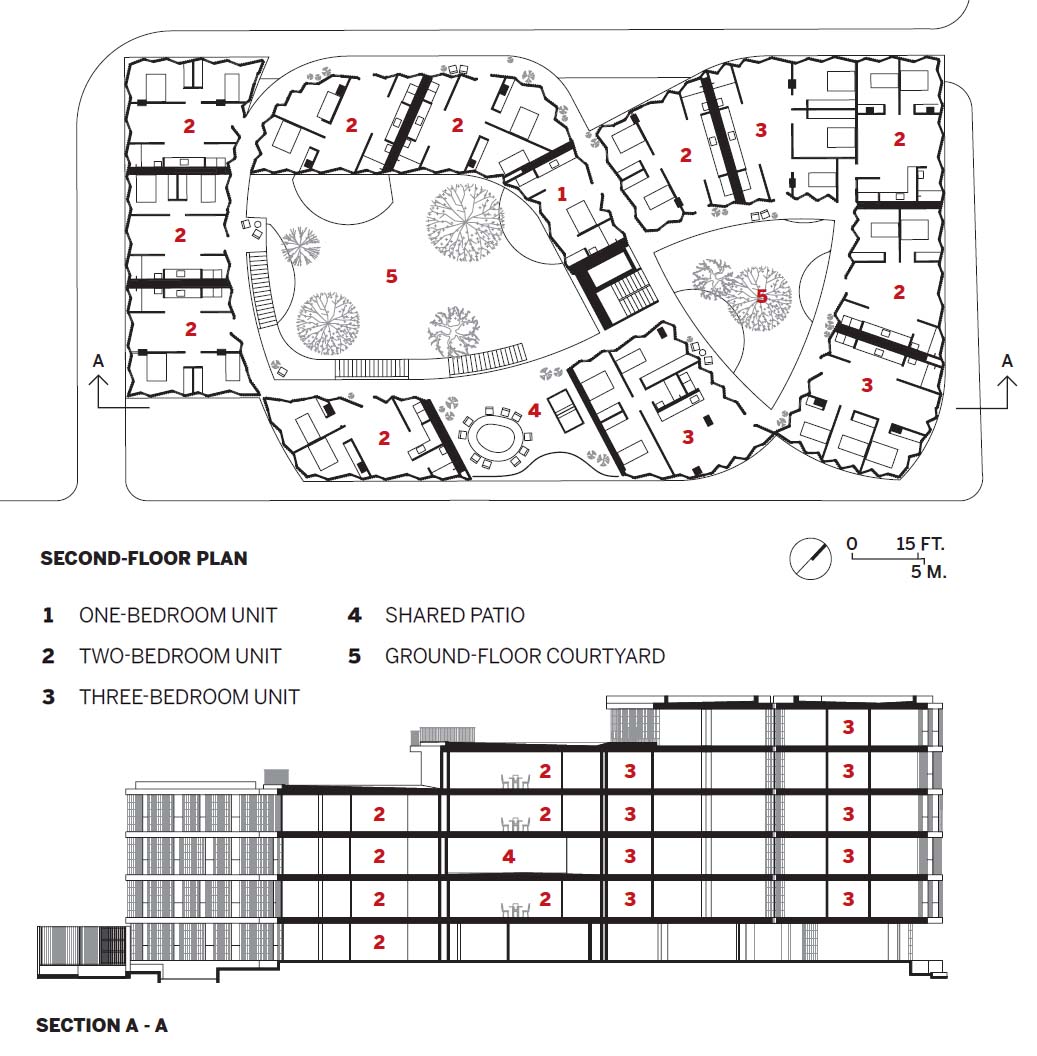