This website requires certain cookies to work and uses other cookies to help you have the best experience. By visiting this website, certain cookies have already been set, which you may delete and block. By closing this message or continuing to use our site, you agree to the use of cookies. Visit our updated privacy and cookie policy to learn more.
Home » Site Verrier de Meisenthal by SO – IL and FREAKS
ProjectsBuildings by TypeReuse and Renovation

Site Verrier de Meisenthal by SO – IL and FREAKS

Thanks to its abundant forests, water, and sand, the Pays de Bitche, in the Moselle département of France, has long been a center for glassmaking. Initially a nomadic activity, glass production in the region began to settle at fixed sites in the 18th century, and the Meisenthal glassworks, which began operating in 1711, is among the oldest. Continually expanded over the following two and a half centuries, the plant, which employed the celebrated Art Nouveau glass artist Émile Gallé for 27 years (1867–94), reached the peak of its production in the 1920s. But, after World War II, Meisenthal’s artisanal methods were unable to compete with mechanized glass production, and its furnaces shut down, seemingly for good, in 1969. 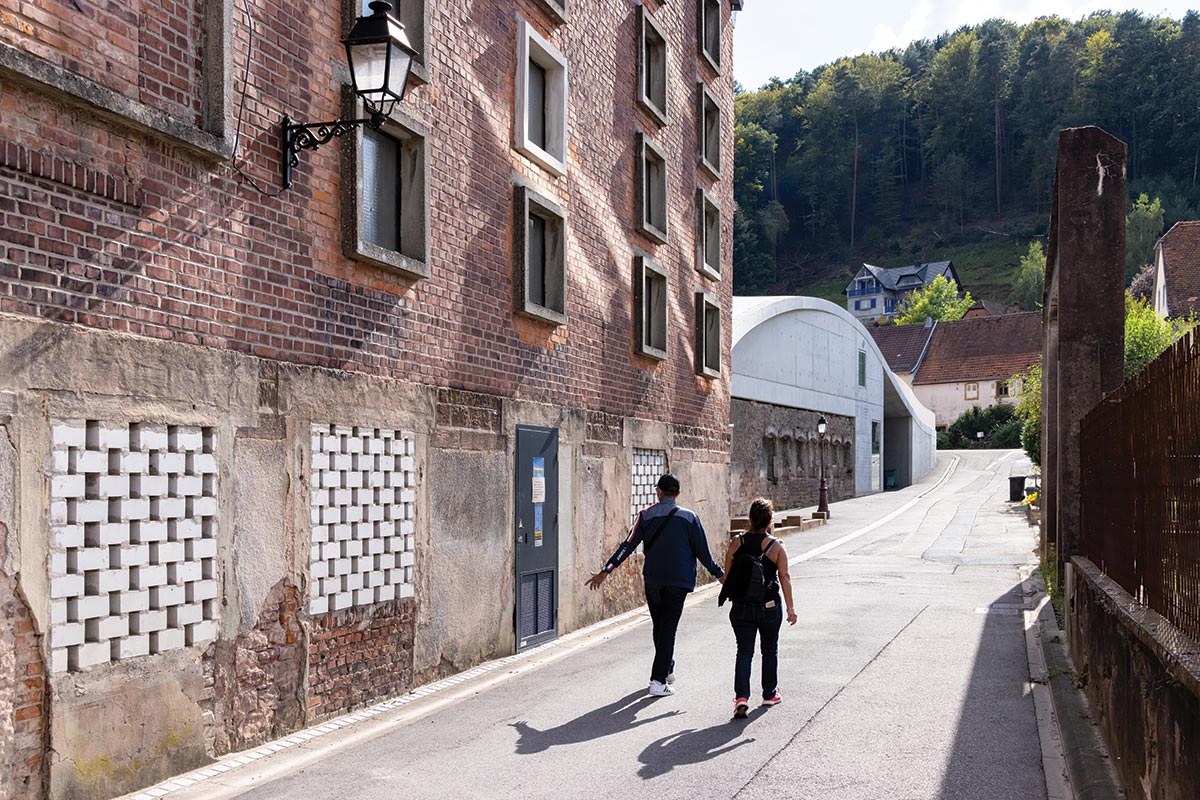 The reimagined glassworks (top) lies within a bucolic, resource-rich setting and is accessed from the street (above) at the center of town. Photo © Iwan Baan, click to enlarge.

Located at the heart of a village of 650 souls, the 2.5-acre complex did not remain empty for long. Artists began to squat in it, and, in 1979, local experts opened a museum of glassmaking in the former administration building (whose foundations date back to the site’s origins and contain the remains of the first furnace). In the early 1980s, the 35,000-square-foot Halle Verrière—by far the largest of the workshops, built in the 20th century—began to be used for art expositions and rock concerts, while the final ingredient in the site’s renaissance came in 1992 with the creation of the Centre International d’Art Verrier (International Center for Fine Glassmaking, or CIAV), which works with art students and international designers to perpetuate the region’s ancestral know-how. The CIAV has since become famous for resurrecting the tradition of boules de Noël—Christmas ornaments—that were a specialty of the neighboring Goetzenbruck glassworks, which, like Meisenthal, had ceased production in 1969. 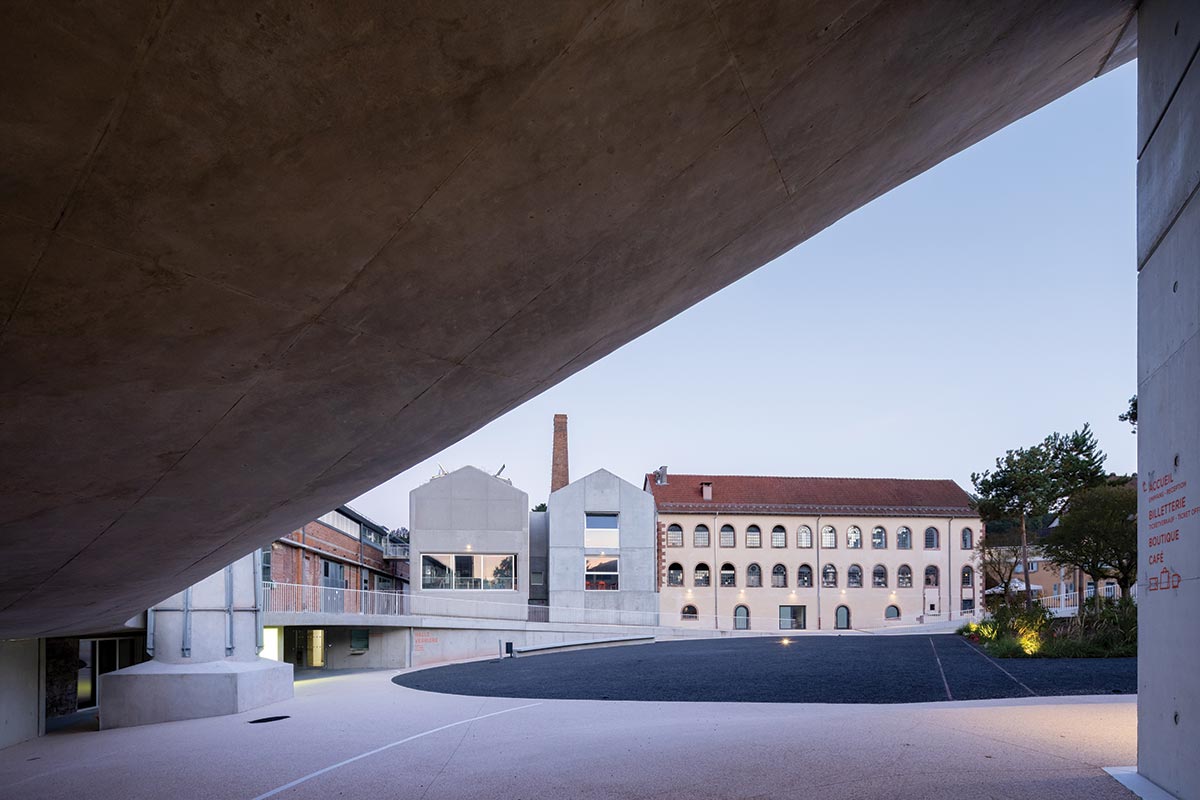 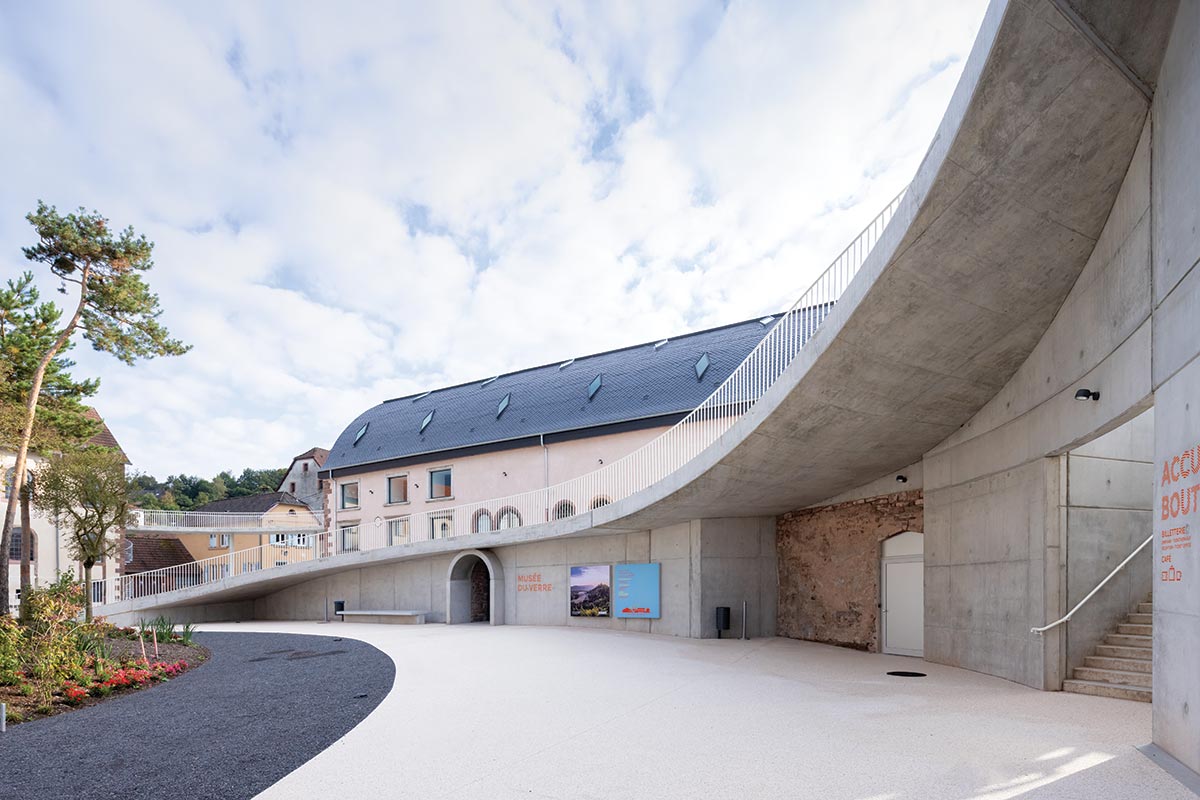 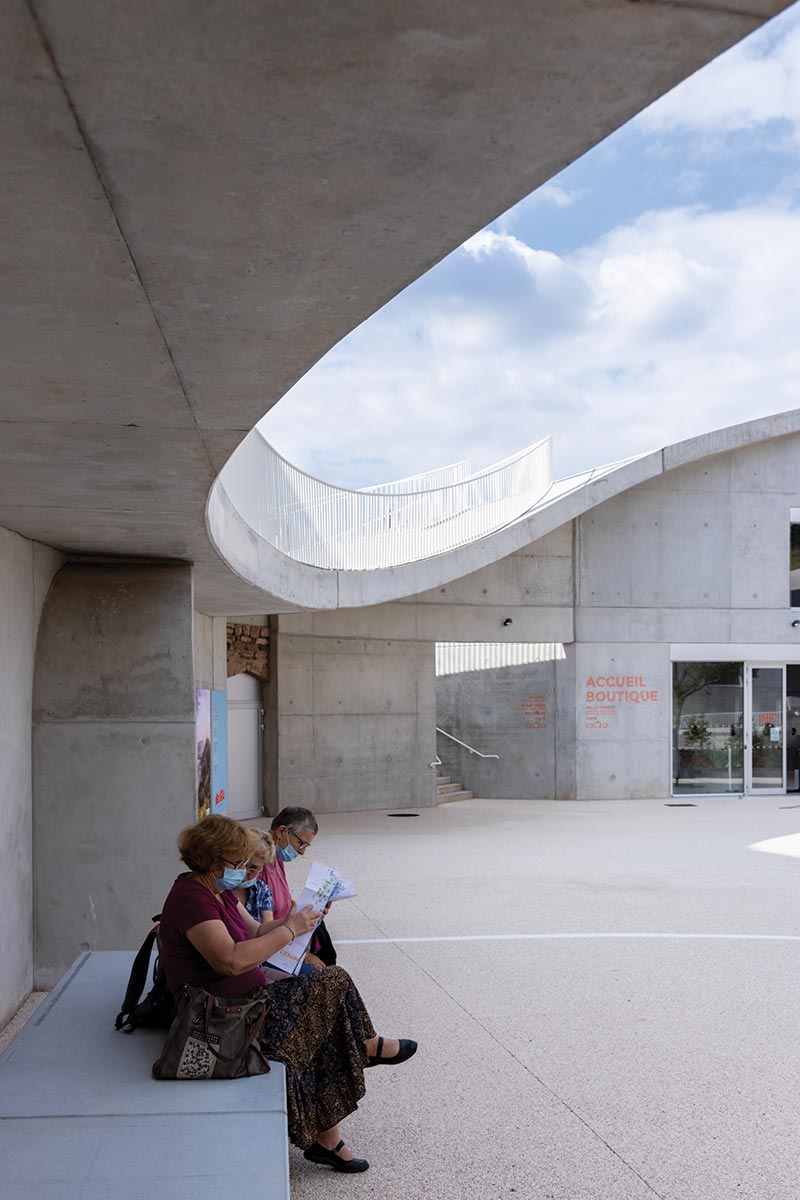 The canopied entry reveals the courtyard, Halle Verrière, and CIAV (1), plus the glass museum (2), and ticket office (3). Photos © Iwan Baan

By the early 2010s, the repurposed Meisenthal plant was receiving 70,000 visitors a year. “We’d proved we had the audience; now we needed a proper setting and facilities to welcome them,” explains Yann Grienenberger, CIAV’s director. In 2014, the local authority, owner of the site, agreed to a $13.6 million redevelopment plan, and an international call for proposals was organized. The brief included the renovation of the existing buildings, the addition of a black-box auditorium to the Halle Verrière, and the construction of new furnaces for the CIAV as well as of a new ticket hall/café for all three institutions. Entrants were expected to bring a sense of unity to a disparate site. “Out of the 184 submissions received, we chose three,” continues Grienenberger. “A safe pair of hands from Berlin [LIN], a more local team [the Belgians Hebbelinck and de Wit, in partnership with Nancy-based office Studiolada], and the joker entry [New York–based SO — IL, who teamed up with French practice FREAKS]. The joker won.”

“I think they chose us because we didn’t really do a building,” says Florian Idenburg, founding partner, with Jing Liu, of SO – IL. “Ours was also the project that preserved most of the existing fabric.” Seductively simple, the winning design aimed to unite the three institutions—whose entrances are all at different heights because of the sloping terrain—in an undulating wave of concrete that also includes the ticket hall on the street. Resisting the temptation to build a glassworks in glass, SO – IL and FREAKS sought nonetheless to represent the material through the idea of the concrete wave as symbolic “of molten earth. We felt it was allegorical for glass: something that is solid and becomes fluid and then hardens again,” explains Idenburg. They also aimed to create a coherent visitors’ circuit for the three entities, which are located around a central courtyard: first you arrive in the ticket hall (which also houses the gift shop and café); from there you pass into the museum via its basement, where you see the remains of the first furnace and watch an introductory film, before taking the elevator to the upper-floor galleries; a footbridge then leads you over to the CIAV, where you tour the glass-engraving workshops and watch, from the safety of an upper-floor internal window, the making of glass objects in the new furnace buildings; and, finally, you descend to the courtyard and can enter the Halle Verrière if there is an art exhibition on display that day. 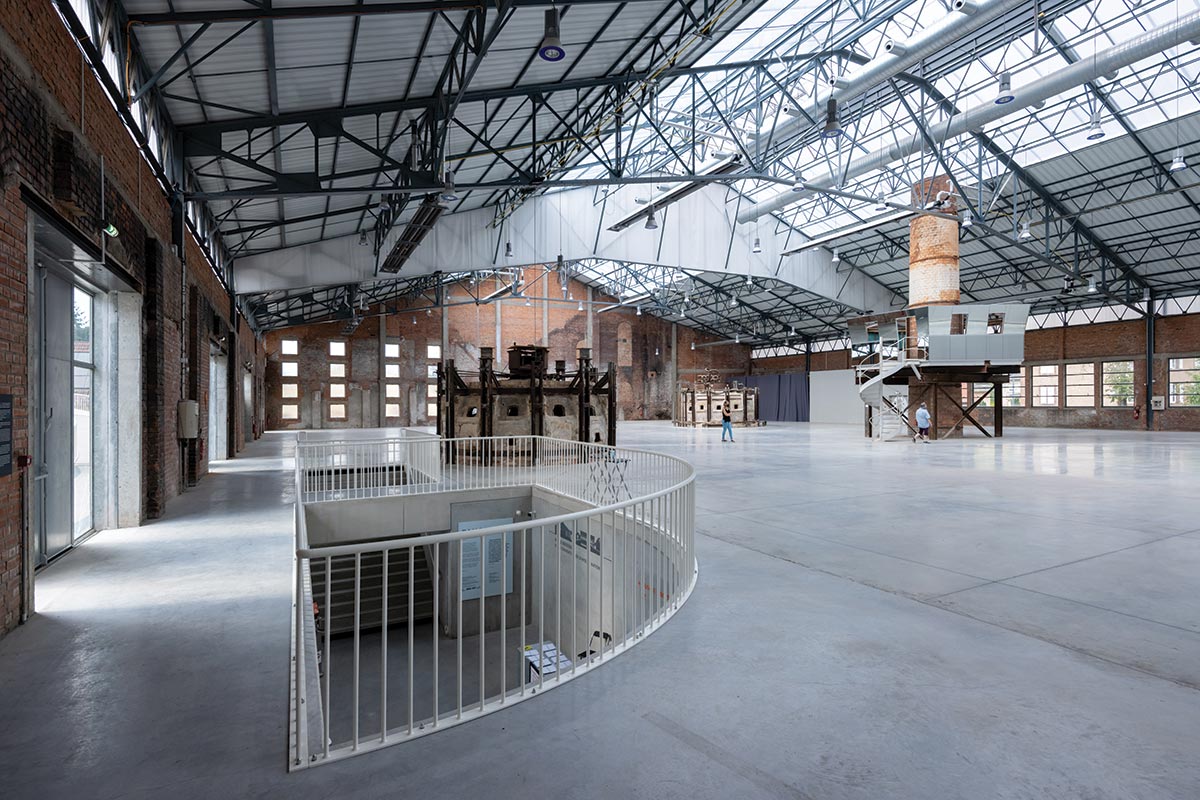 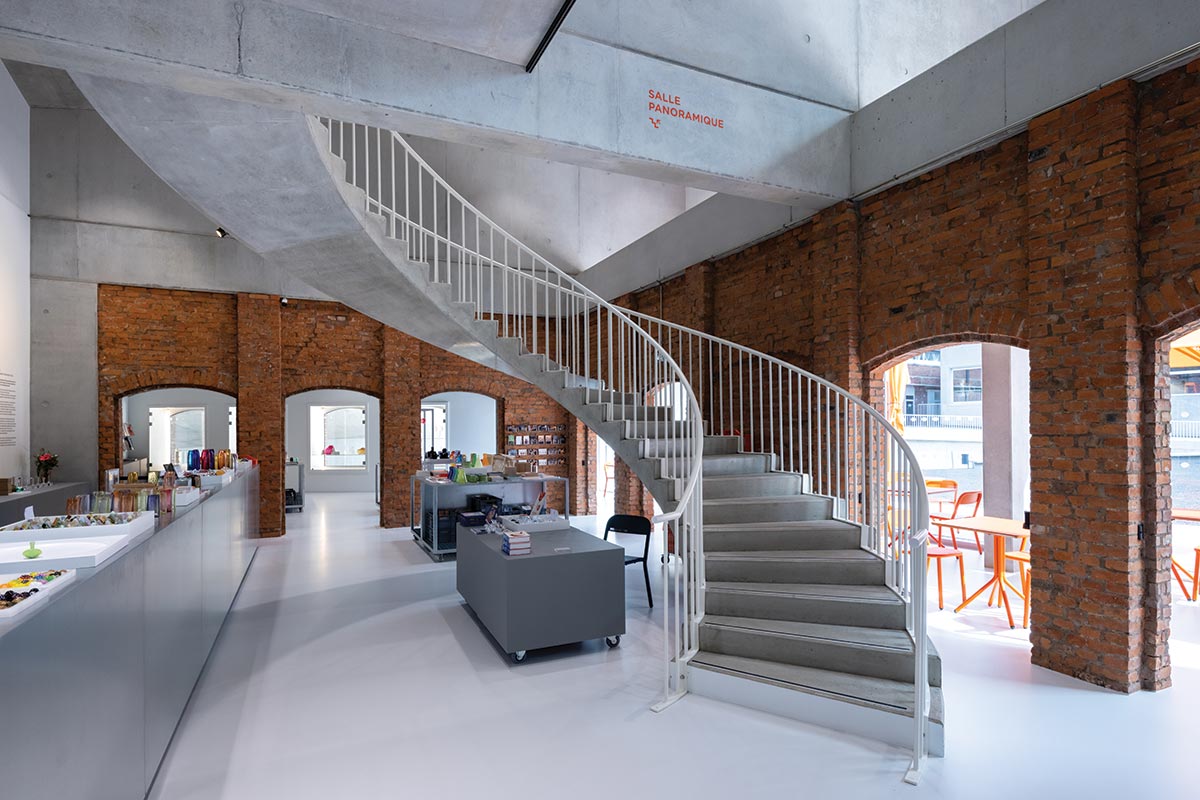 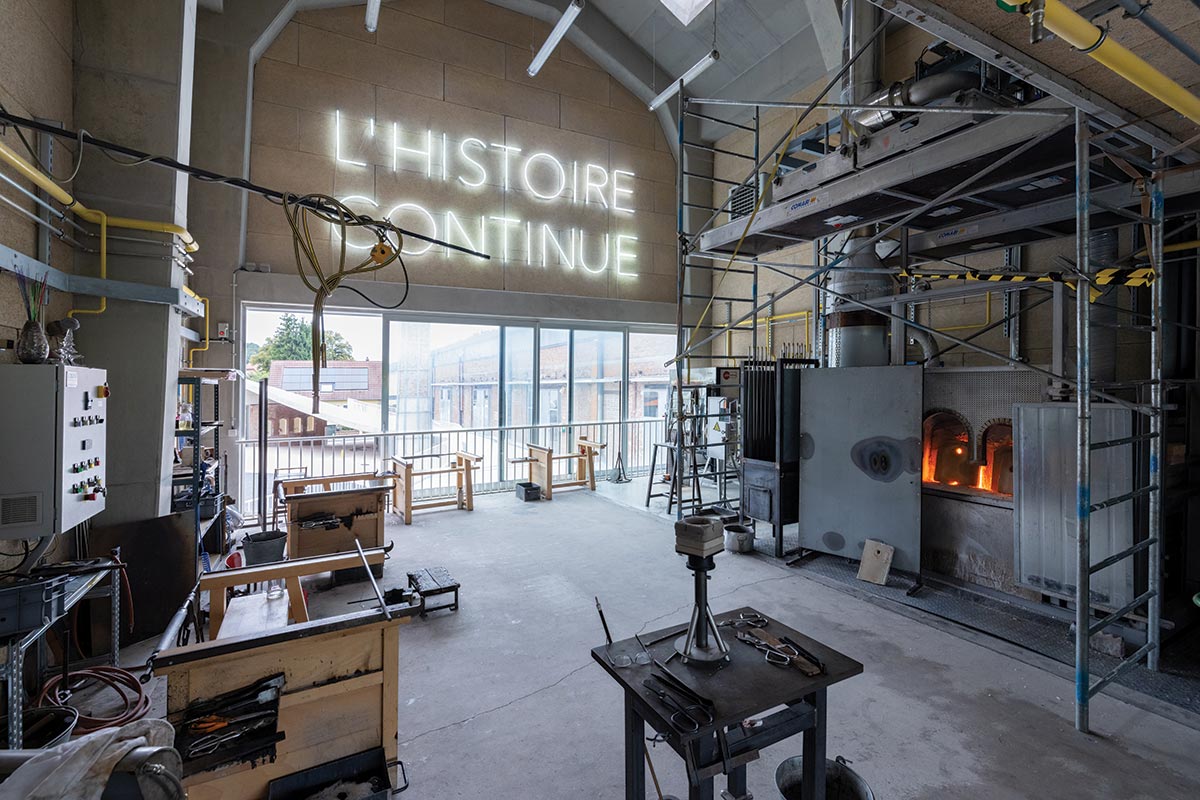 In the team’s competition renderings, the concept appears strong, especially from the air, but the details are very vague—which no doubt goes some way to explaining the disparity between the images’ rhetorical seductiveness and the reality on the terrain. Neither does it help that the concrete contractor, who apparently found the architects’ drawings too complicated to read, did such a sloppy job. The problems begin right at the entrance, which comprises a deep concrete canopy that is forced to make the jump between the ground floor of the Halle Verrière and the upper floor of the ticket hall: the resulting lopsided tunnel is distinctly uninviting. Then, when viewed from the courtyard, the all-concrete humpbacked ticket hall is distressingly ungainly, its slopes too steep for pedestrians, meaning the undulating circuit is interrupted by railings. (Given the very limited surface area it provides, was the entrance building’s upper floor even necessary, one wonders.)

Despite these reservations, there is much to like. The transformation of the Halle Verrière is sober and practical, with a new lower-level public entrance, generous dressing rooms, and a large bar catering both to the main hall and the black-box auditorium. The latter has been praised by both staff and visiting artists alike for its acoustics and adaptability (which includes the possibility of opening the stage on both sides—an idea put forward by the architects—allowing it to be used for large-scale concerts of 3,000 in the main space). The museum galleries, with displays by Designers Unit, are just as unpretentiously accomplished, as are the ground floor of the ticket hall (which incorporates the ruins of a brick structure) and the two new furnace buildings—one a recladding of a 1920s concrete frame, the other its doppelganger, poured on-site. If the architects had gone a little lighter on the facile wave symbolism, this project would have gained enormously in potency.

Las Americas Housing by SO — IL