”Son, grandson, husband, and father of architects, Gottfried Böhm has reason to recognize the nourishment that traditional ways and means provide in architecture, as in all the arts.” So read the citation of the jury when Böhm won the Pritzker Prize in 1986. He was the first German to win the prestigious award, and until 2015 when Frei Otto was selected for the prize, the only one. Böhm died at 101 on June 9 at his longtime home in Cologne.

Of the more than 150 buildings he designed in his seven-decades-long career, nearly half were churches—many of which replaced churches destroyed during World War II. At the Madonna of the Ruins church in Cologne, which Böhm began working on in 1949—his first project designed on his own after collaborating in his father Dominikus’s architecture office—an octagonal freestanding volume is set amid the surviving pieces of the former chapel. The structure was later incorporated into the Kolumba Art Museum (2007) by Peter Zumthor. 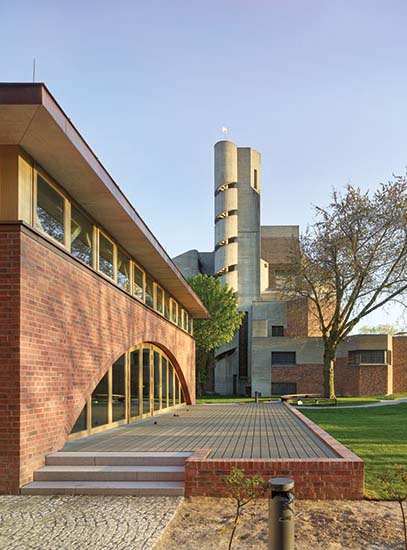 An annex to a choir school in Cologne by Lederer Ragnarsdóttir Oei and featured in RECORD’s February issue, abuts the sculptural concrete Church of the Resurrection of Christ (1970), designed by Gottfried Böhm. Photo © Roland Halbe.

His most famous church, Maria, Königin des Friedens (Mary, Queen of Peace), a prominent pilgrimage church and parish in Neviges, in northern Germany, breaks with tradition. Its concrete Brutalist form, resembling an abstract Cubist carving with a jagged roofline, reflects Böhm’s other interest, sculpture, a subject for which he also received a degree. His buildings are often made up of complex forms: spiral staircases, towers, bridges, conical roofs, domes, shell and fabric ceilings.

Böhm taught for over 20 years at the RWTH Aachen University, influencing a new generation of architects. “Böhm was already an archetype of an architect for me when I started to study architecture at Aachen,” recalls Olaf Drehsen, a partner at JSWD Architects. His 180-person firm is close to Böhm’s own office, housed in a simple building designed by his father Dominikus in Cologne’s Marienburg district. “Böhm’s concrete work and his deep knowledge of Christ and churches were deeply impressive for me. But he was also a warm-hearted and humorous patriarch of office and family. It is a big loss for architecture.“

In an interview with Böhm on the occasion of his 100th birthday last year, Süddeutsche Zeitung, one of the largest daily newspapers in Germany, called Böhm's churches strongholds of faith, his town halls administrative palaces. It goes on: “While many architects were producing a triumphal march of eternally dreary industrial construction in the post-war years, Böhm planned a different modernity—one that leaves room for what is so often driven out of architecture: the irrational, and the joy of free play.”

Böhm’s legacy lives on with three of his four sons, who are also architects.