Suburban sprawl promotes a cookie-cutter approach to commercial as well as residential development, creating successions of similar buildings—whether they happen to be stores, banks, restaurants, places of worship, doggy-daycare centers, or offices. Everything fits into a strip mall. Commissioned to design a two-story mixed-use structure, with retail on the ground and a dermatology clinic above, the Winnipeg firm 5468796 Architecture aimed to transcend the humble building type. Instead of a flimsy curtain wall or tilt-up construction, the architects specified poured-in-place concrete, and added depth to the building’s facade with recessed storefronts and large balconies at the corners of the upper story. A band of concrete panels precast with a strongly textured corduroy pattern obscures the lower portion of the second floor, creating a sense of mystery about what happens behind it. You may not recognize this as a medical facility, but you immediately know it’s not like anything else around it. 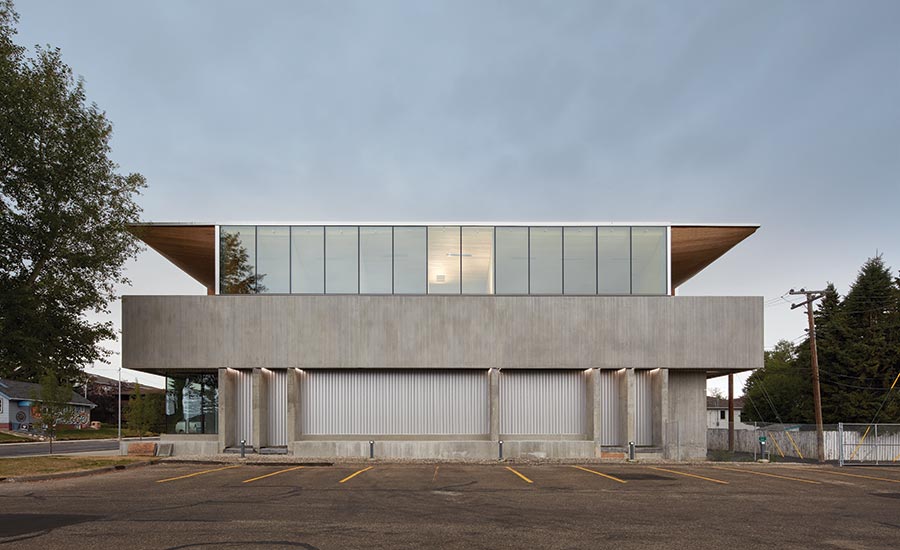 A concrete colonnade wrapping around the building establishes a visual rhythm for the ground floor. Photo © James Brittain Photography, click to enlarge.

Facing 17th Avenue, a busy thoroughfare that runs south of downtown Calgary, Alberta, the 25,000-square-foot building needed to establish a presence on the street and create a handsome buffer between inside and outside. The stately rhythm of thin, rectangular concrete columns and large panes of glass on the ground floor has helped attract a mix of street-level retail that includes a quirky pharmacy/café and, if lease negotiations are successful, a dental office. Some people park in a small surface lot adjacent to the building, but most enter from an underground garage. Knowing this, the architects carved a lightwell out of the center of the structure’s large footprint, bringing daylight and greenery down to the two parking levels. On each floor, the elevator lobby looks onto this lightwell, injecting a touch of nature into the arrival experience. 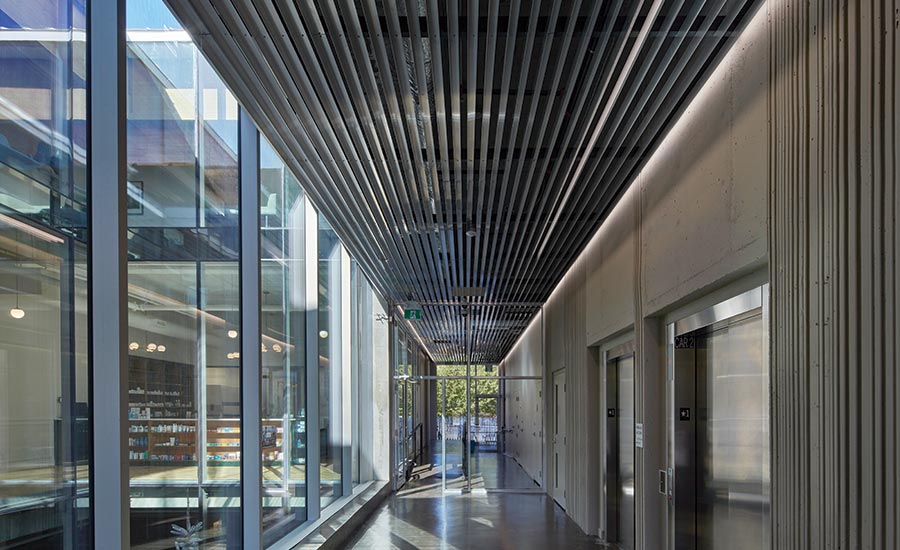 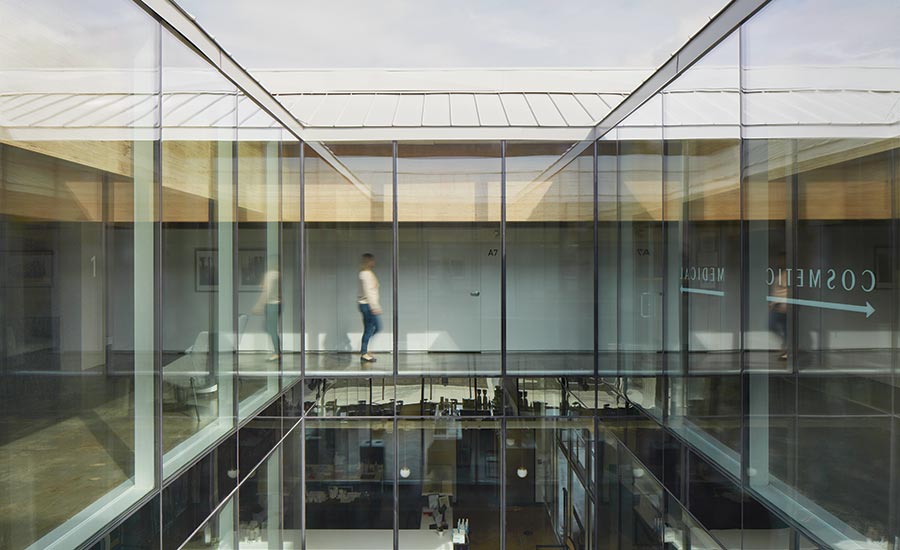 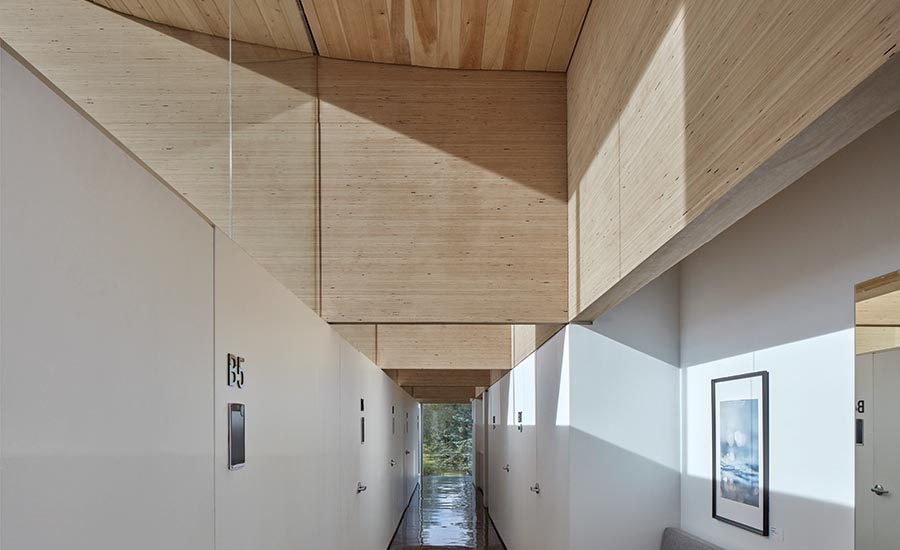 Creating a calming transition from busy street to medical clinic was a critical goal of the architects, says Johanna Hurme, the 5468796 partner in charge of the project. “We focused on the patient experience and wanted to make the interiors as ethereal as possible,” she says. To do that, they choreographed layers of light that guide visitors through the large second-floor clinic and help them feel relaxed. Clerestory glazing brings in diffuse light from above, while the band of cast-concrete panels, which the architects refer to as the “veil,” blocks views to the undistinguished environment outside and maintains privacy for the patients inside. Soft illumination from the lightwell, skylights, and corner balconies, which are protected by deep eaves, adds to an ambience of tranquil medical care. The team of three doctors who work here hope to see about 90 patients a day (their prepandemic level) in treatment areas devoted to medical dermatology, aesthetic dermatology, and rheumatology. “The architecture needs to move people efficiently through the space without making them feel like they’re being processed,” says Hurme. 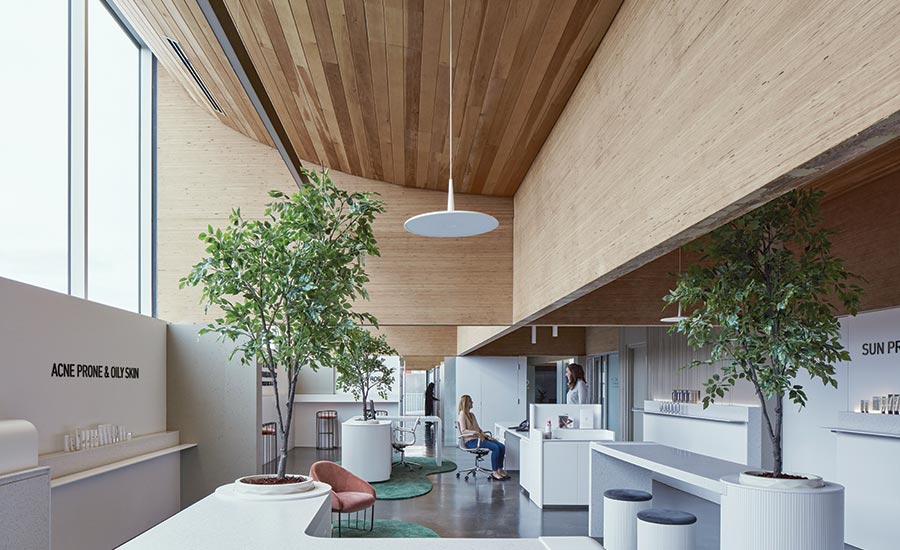 The curving roofline slides inside the clinic, injecting a graceful sense of motion (4). Pine cladding on the curving ceiling adds warmth to the light in a waiting area (5). 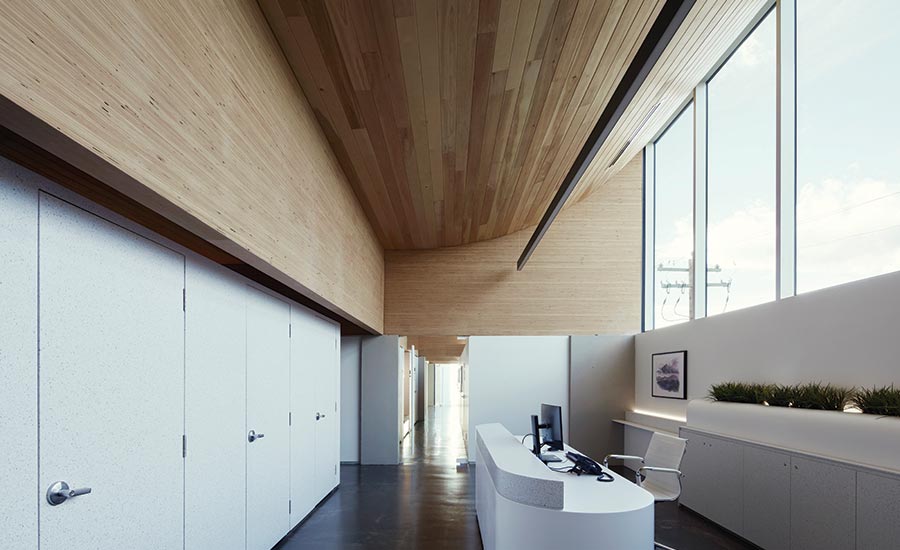 From the outside, what appears at first as a flat roof turns out to be gently curved on its underside, its profile revealed most clearly above the building’s corner balconies. This gracefully bowing plane, clad in light-colored pine, slides inside to become the ceiling—reflecting a soft glow throughout the facility and compressing space to create the sense of a protected haven. Inside, walls rise to a 7-foot-high datum to reinforce that sense of enclosure, while clerestory windows above offer patients—often lying on their backs—views up to the sky. Supporting the roof is an exposed grid of engineered-lumber beams that start at the 7-foot datum and rise another 6 feet. Pulled away from the building’s perimeter, the beams don’t interrupt the clerestories or block the daylight sliding deep into the facility. But they add depth and shadow to the various spaces and rooms—no flat hung ceiling here. 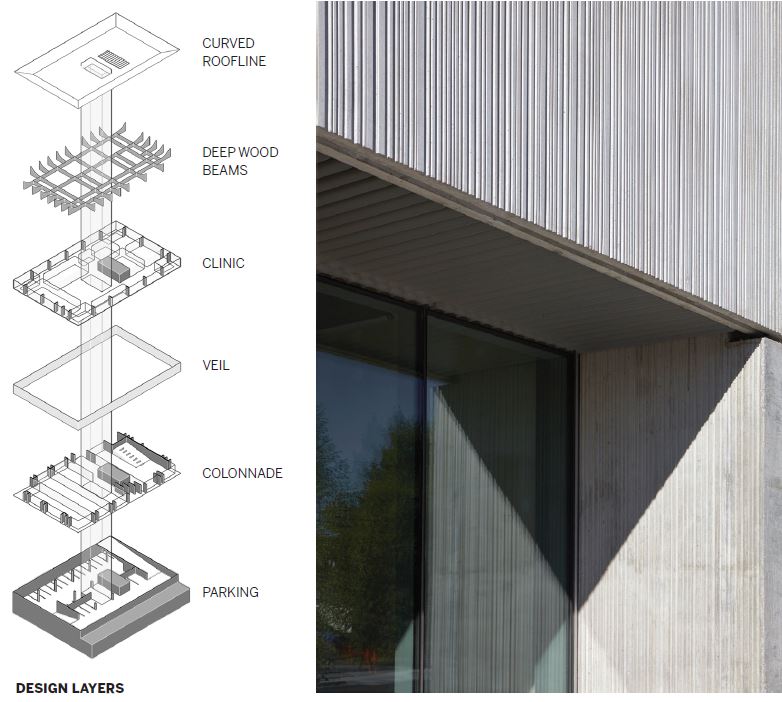 While not conceived as a “green” project, the building uses passive-design strategies such as broad eaves and deep recessing on the storefronts to reduce solar loads. Triple-pane windows and generous insulation also minimize energy consumption.

Founded in 2007 and named after its registration number, 5468796 Architecture has been expanding in recent years beyond its base in Winnipeg to do projects in Calgary, Toronto, Nova Scotia, and British Columbia. Included in Record’s Design Vanguard in December 2011, the firm has developed a reputation for innovative housing projects such as the Avenue Building and OZ Condominiums, both in Winnipeg. After giving a talk in Calgary in 2016, Hurme was contacted by Alkarim Devani, a local developer, who, along with his brother Afshin, runs a company, RNDSQR (pronounced “Round Square”) that prides itself on “thoughtful placemaking” and using design to bring people together. 5468796 (which has no easy-to-pronounce phrase for its name) has done a number of projects for RNDSQR, including housing and master planning, in addition to Beacon Dermatology.

Most commercial buildings on busy suburban thoroughfares seem temporary—cheap containers for an ever-changing mix of tenants. With its sculpted form and material palette of timber beams and deeply grooved concrete, Beacon Dermatology conveys a different message—that developer-built structures can have heft and substance, grace and subtlety. 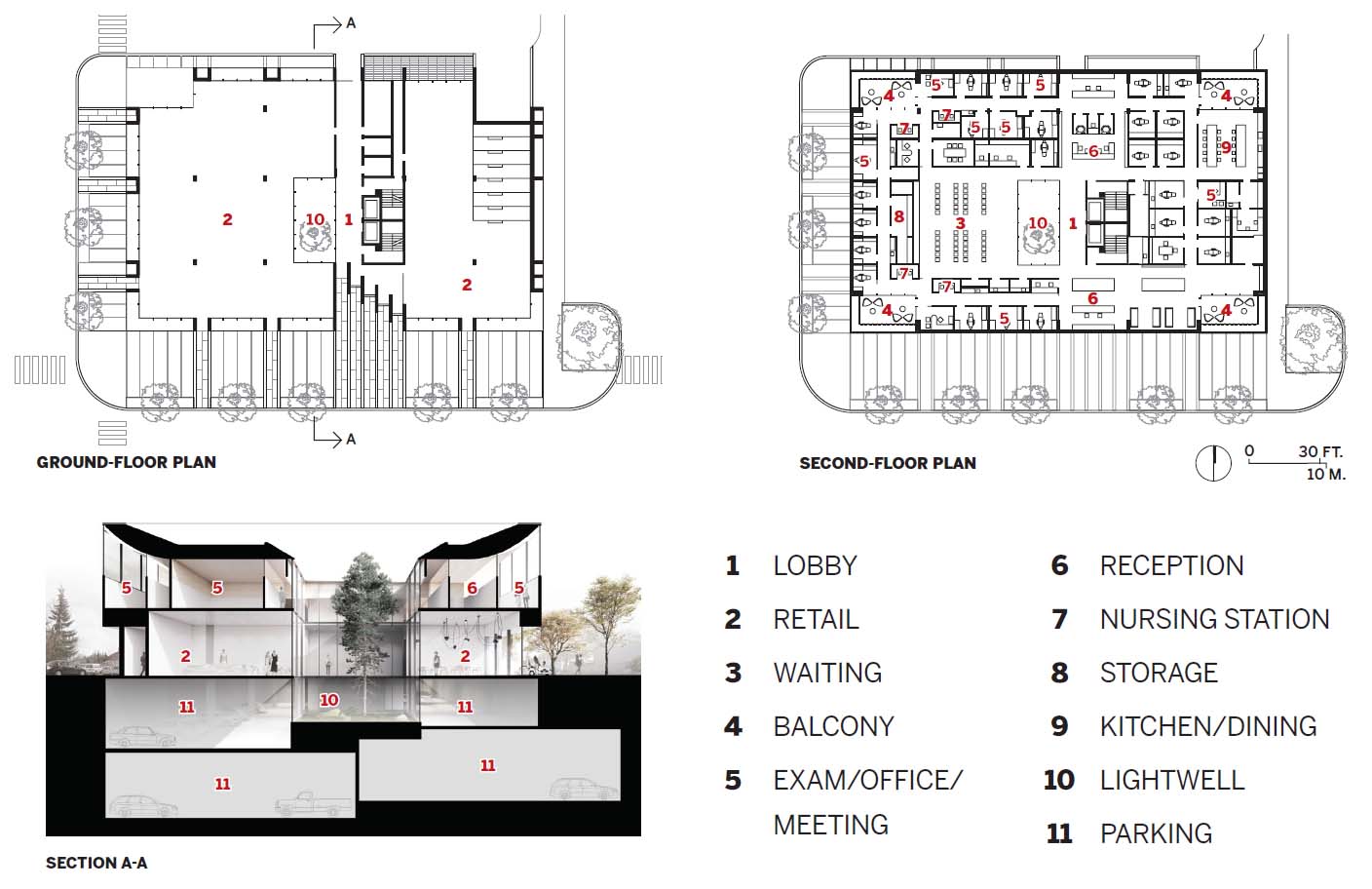