Although Penn Medicine Radnor, which opened in 2020 in suburban Philadelphia, is strictly an ambulatory care center, it belongs to an august medical family tree. It is descended from Pennsylvania Hospital, the first such institution in this country, founded by Benjamin Franklin and Dr. Thomas Bond in Philadelphia, in 1751. Through a merger between the original hospital and the University of Pennsylvania Health System (UPHS) in 1997, it now is connected to more than a dozen health-care facilities of varying specialties in the Philadelphia area.

UPHS’s decision to build a large, 250,000-square-foot structure—to serve 1,500 outpatients a day—in Radnor township was simple. “We wanted to provide as much care as possible close to home,” says Tracey Commack, the hospital’s associate executive director. The array of services ranges from endoscopy, radiation and oncology, audiology, ophthalmology, neurosciences, and dermatology to a heart and vascular center. Designed by Ballinger, architects and engineers based in Philadelphia, the center is unlike most centralized hospitals because it is part of a mixed-use development, next to a high-speed intercity railway, that will eventually include an office building (also designed by Ballinger) and a hotel (architect to be determined). UPHS purchased the 22.6-acre site in 2015, but, since the parcel was larger than needed for its medical program, UPHS, with Ballinger as the master planners, sought a mixed-use zoning to amend the pharmaceutical lab-and-office one that previously existed when Wyeth Ayerst Pharmaceuticals company, by then defunct, occupied the site. Brandywine Realty Trust is the developer of the two nonmedical components. 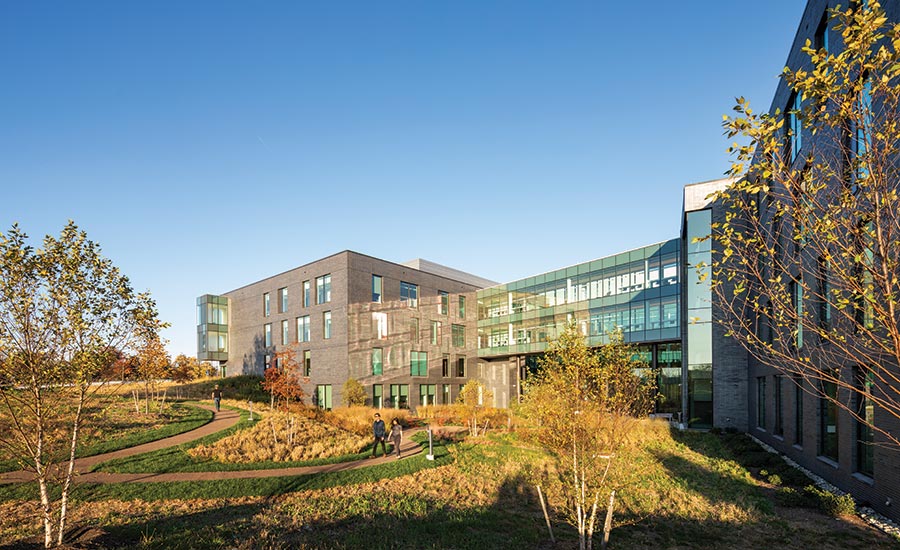 A meadow extends to the west. Photo © Albert Vecerka/Esto, click to enlarge.

Wyeth Laboratories (PDF)—as it was initially called—had been designed by Skidmore Owings & Merrill, with low-slung, blue-green glass and porcelain volumes. While its Midcentury Modern look was distinctive, the renovation needed for the UPHS program was deemed too extensive to keep the architecture, and so the buildings were razed. “Not only were the existing ones inefficient for health operations,” says Ballinger principal Eric Swanson, “the former complex depended on surface parking instead of garages—which didn’t help stormwater management.”

Only the concrete from the foundations was salvaged; it was recycled, cut, and used for fill to regrade the land, as well as for the base of the ground-level hospital slab.

To adhere to the height-limit and size requirements of the new zoning, Ballinger designed a U-shaped structure, four stories high, with a steel frame and a sleekly tailored iron-spot-brick rainscreen. A 1,000-car precast-concrete garage, six stories high, hovers above its east end near the railroad tracks. From the garage, patients can enter the hospital on the ground level, obviously a boon in bad weather. Stepping into the lobby, they behold, through floor-to-ceiling glass expanses, a lushly planted garden with outdoor seating, enclosed by the facility’s two wings. Beyond, a meadow rises gently to the west, concealing any glimpse of a main road on its other side. 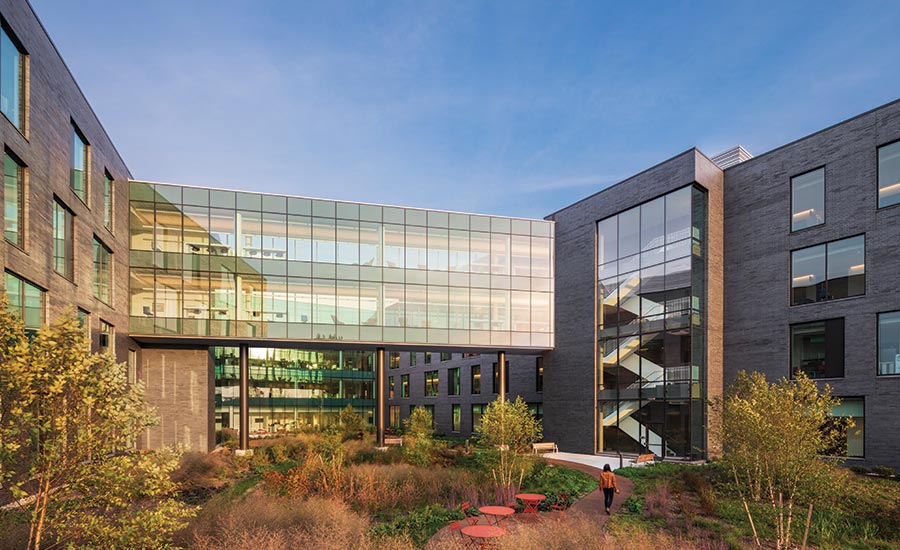 A landscaped courtyard is enclosed by two hospital wings, which are linked by a two-level pedestrian bridge. Photo © Albert Vecerka/Esto 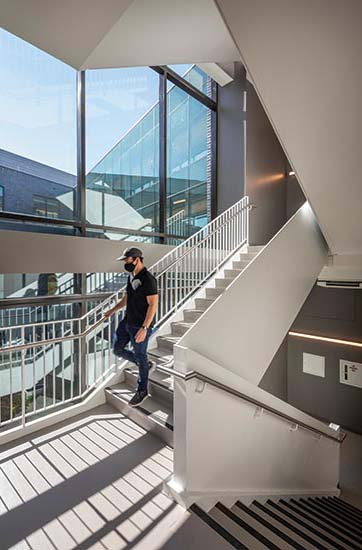 The architects emphasized the knoll-like configuration of the land to place the main entrance on a higher level than the one on the ground floor accessed by the garage. Here, on the north, a porte-cochère for drop-off brings visitors into the first floor, where they find a café and retail shop, and can survey the green courtyard one level below. On the second and third levels, the two wings of the U, one angled away to avoid a parallel alignment with the other, are linked by pedestrian bridges. As you walk across these narrow—14 feet wide—glazed passages, you may want to linger: counters for laptops line one side and lounge chairs are arrayed on the other. Two glassed-in stair towers jut into the courtyard to bring visitors down to the garden, and encourage physical exercise.

According to Commack, evidence-based design was behind the attention to light and the views of plants and trees, seen not only at the point of arrival, or from the pedestrian bridges, but through the floor-to-ceiling glass expanses of the hallways and lounges, which overlook the grassy courtyard from much of the facility. Even some corridors of the clinical pods that branch off the main hallways terminate in windows showing glimpses of the verdant property. Since the greenery attracts a variety of birds, the design team placed fritted glass in the most vulnerable areas; elsewhere, glazing is etched or tinted. 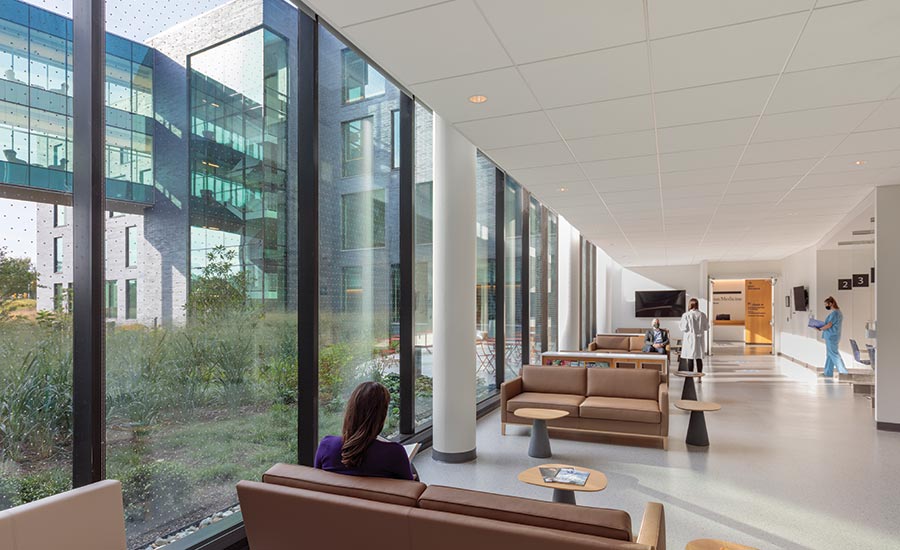 Plantings can be viewed from the waiting areas and hallways. Photo © Albert Vecerka/Esto

On a weekday in the spring, the waiting areas were not crowded; visitors and patients were socially distanced and wore masks, following Covid restrictions. The architects designed the waiting areas and exam pods so that they convey a modern Scandinavian simplicity through wood louvers and doors, and used assorted earth tones that echo the brick exteriors. Terrazzo floors provide a sheen to the well-trafficked areas on the first level (elsewhere, vinyl surfaces with a terrazzo pattern are substituted). Many walls have a lustrous plaster finish; others display plaster “paintings” abstractly relating to the landscape. Uplighting adds a soft ambient glow supplemented by the infusions of daylight. 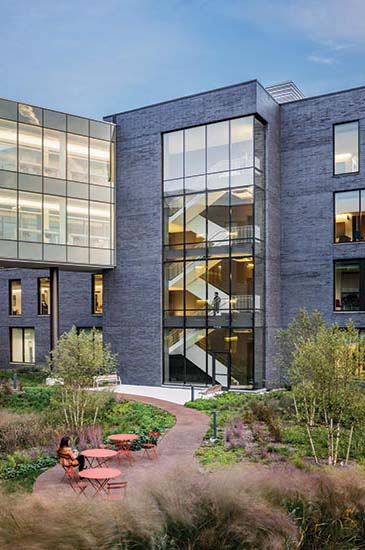 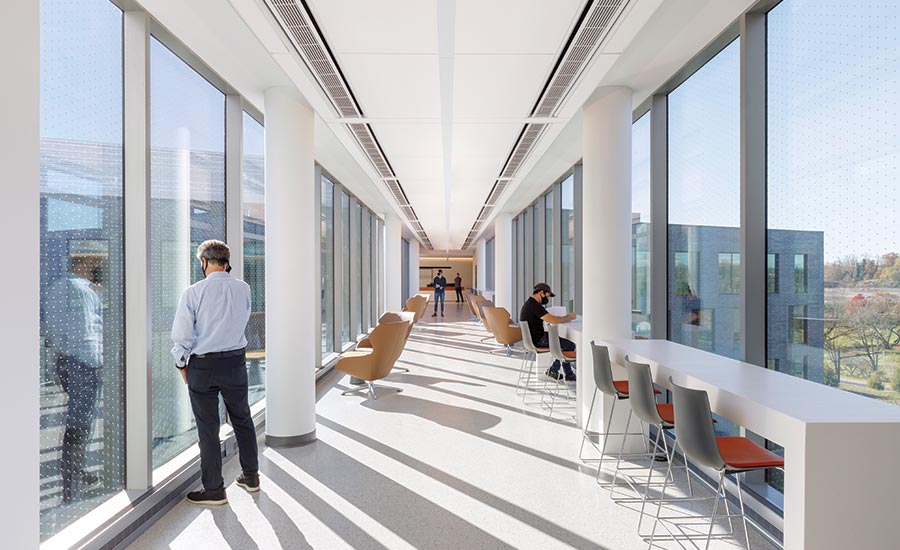 In the courtyard, Jonathan Alderson Landscape Architects planted a rain garden (1). The pedestrian bridge overlooks it on both sides (2). Photos © Albert Vecerka/Esto

Jonathan Alderson Landscape Architects, based in nearby Wayne, created the sustainable natural setting that adheres to Penn Med’s biophilic orientation. The firm centered the courtyard around a basin-shaped rain garden that captures stormwater and allows it to percolate into the ground instead of producing runoff. “A storm-management system is the backbone of our plan,” says Alderson, who also specified native plants such as penstemon, baptisia, and phlox to help in this endeavor. Paths threading through the garden and meadows are composed of porous chips of recycled tire and stone, which also help water absorption. Alderson favored meadows over lawns since they don’t need to be irrigated. Some large trees were saved, and over 100 new trees have been planted on the hospital site; 150 more trees will be added to the entire complex. 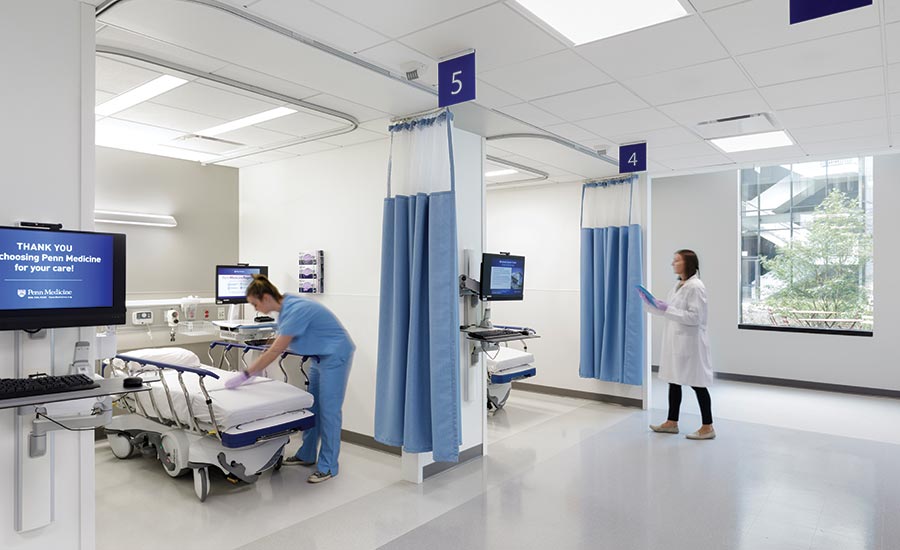 The clinical pods have views out as well. Photo © Albert Vecerka/Esto

The 1751 progenitor, Pennsylvania Hospital, had a “physic garden” to grow plant ingredients for medicines, so perhaps Penn Medicine Radnor is showing its ancestral DNA. But there is evolution: now the extensive vegetation has psychological benefits, and the stormwater measures and other strategies place Penn Med Radnor on track to qualify for a LEED Gold certification. 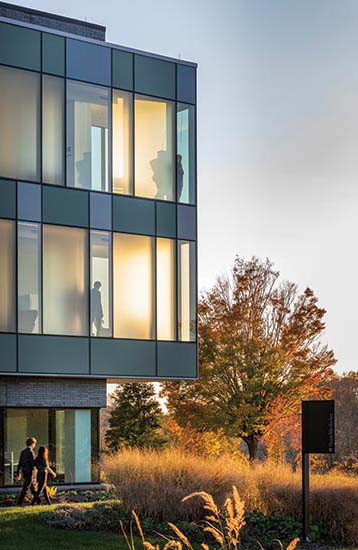 As another evolutionary step, the mixed-use development concept offers an intriguing business model for future health-care facilities of a decentralized yet specialized type. True, the pandemic and its economic fallout have delayed the construction of the hotel and the office building. Brandywine is still seeking an anchor tenant for the work space, known as 155 Radnor, and is marketing the future building with an emphasis on health (touchless features, antimicrobial environments, 100 percent outside-air circulation) and the connection to nature. The developer’s plans for the hotel are further off, although the clientele would seem to be in the area—not only patients who want to stay close to the hospital, but visitors to nearby colleges.

While the ambulatory facility appears more clinical than a hotel, the design imparts a serene ambience. It is too early for studies at the hospital to determine how the entire environment, the luxuriant landscaping included, fosters the cure and treatment of its patients. But this seems to be a good start and is certainly attuned to the progress being made in hospital design today, with its attention to evidence-based design, biophilia, and sustainability. 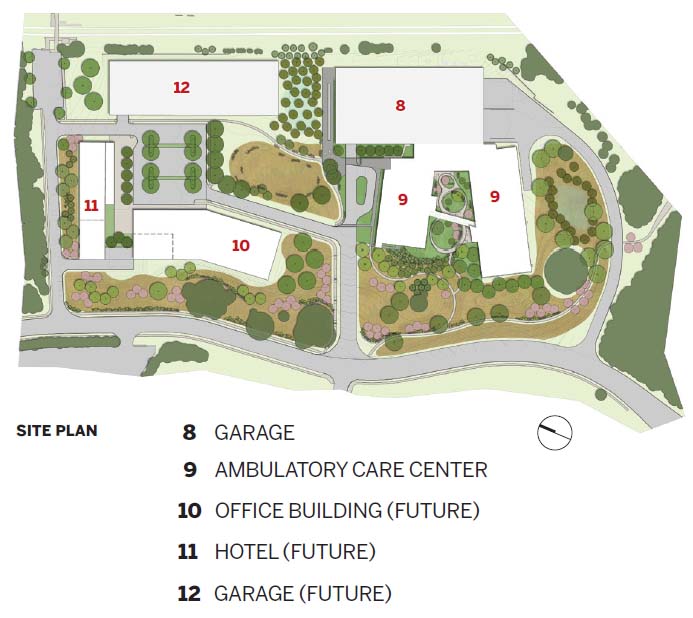 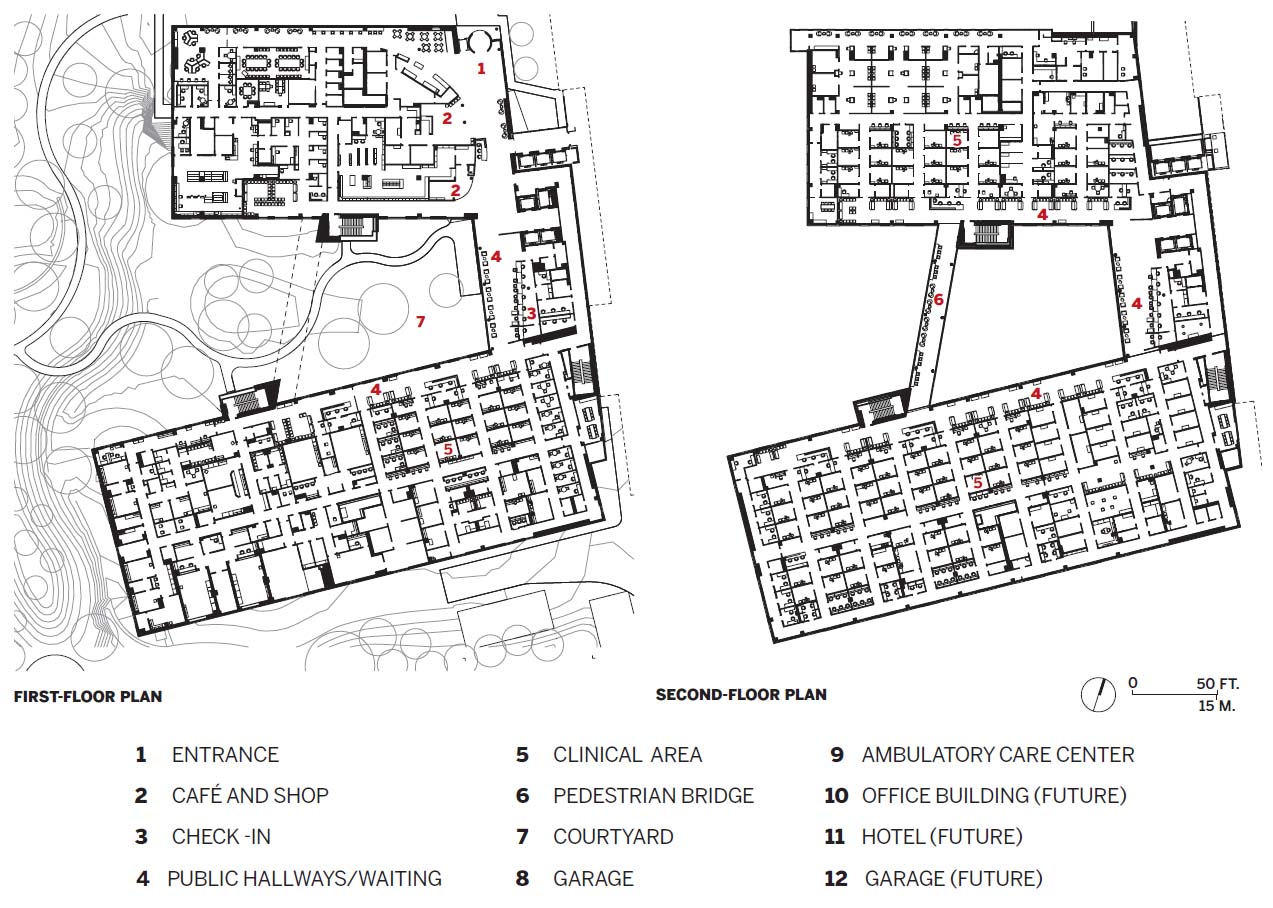