While the American criminal-justice system focuses on detention and punishment—with the largest prison population in the world—Scandinavian countries take a vastly different approach. Denmark’s prison system, for example, emphasizes the “good release.” From the start of a sentence, the state is preparing a convicted person to return to society, equipped with new job and life skills, and perhaps a school degree. To that end, the Danish Prison and Probation Service (DPPS) operates its facilities on a set of principles that includes “normalization, openness, responsibility, and . . . the least possible intervention.” Prison routine is designed to be as close to “normal” life as possible, with inmates doing their own laundry, shopping for food at a prison grocery store, and preparing their own meals. They are encouraged to take responsibility for their actions and manage their lives.

The buildings offer prisoners a connection to the strikingly beautiful setting (above and top). Photo © Adam Mørk, click to enlarge.

Anstalten, a new prison in Greenland, designed by Schmidt Hammer Lassen (SHL)—which was acquired by Perkins&Will in 2018—and Friis & Moltke, embodies the Danish method of incarceration, while engaging the rugged landscape of its site three miles outside Nuuk, the capital of Greenland. The project is part of a larger program by the Danish government to upgrade health and human services in Greenland, an autonomous dependent territory of Denmark with a largely Inuit population among its 56,000 inhabitants, who have their own social practices. “We designed Anstalten as a village of buildings to mimic local communities,” says Jette Birkestov Mogensen, an associate partner at SHL. The buildings climb a rocky slope overlooking Nuup Kangerlua, a fjord 165 miles south of the Arctic Circle. 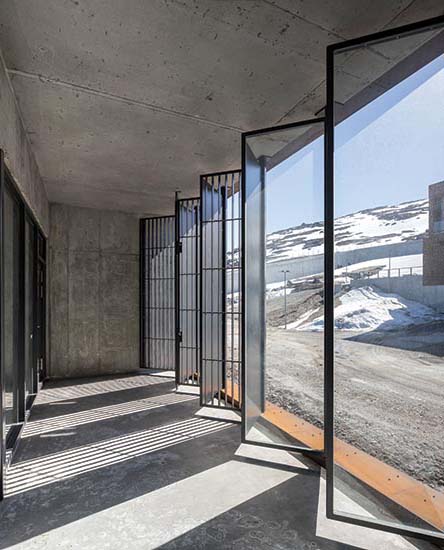 The housing units each have access to an outdoor space, here an enclosed terrace. Photo © Adam Mørk

“Greenland has its own culture, and we tried to respect that with Anstalten,” explains Tina Engelbrecht Ising, head of the resocialization division at the DPPS. Since nature is an important part of that culture, the architects engaged the prison as much as possible with the outdoors, orienting windows to views and even designing one building to bridge a small stream and allow water to run underneath it.

The 86,000-square-foot prison, comprising poured-concrete structures clad in many places with weathering-steel panels, accommodates 76 prisoners (both men and women) in five residential blocks, and provides workshops for learning employment skills, a library, a health center, and facilities for education and recreation. Most of Anstalten (which means “establishment” or “institution” in Danish) sits behind a perimeter wall and houses maximum-, medium-, and minimum-security prisoners. A few buildings outside the wall are for staff and for prisoners close to release, many of whom work or go to school in town and return in the evening. 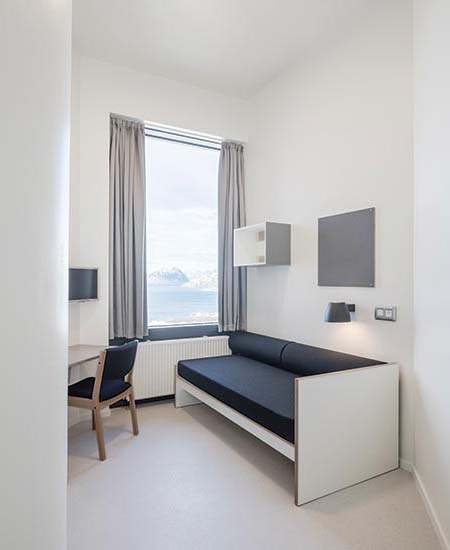 Most inmates live in 130-square-foot rooms with their own bathroom, bed, and desk, like a nice college dorm “single” in the U.S. The units are in clusters of four to eight, with shared living/dining/cooking space. In addition to video surveillance in all communal areas, an observation room adjacent to each cluster provides views into the cluster’s common rooms. But the staff spend most of their time in those communal spaces with the prisoners and act more as counselors than guards, says Engelbrecht. Instead of bars on the windows, high-strength laminated glass provides security. Prisoners can close curtains on their own windows and even lock their doors from the inside, though staff can open any space, if needed. Windows in residential rooms are angled to catch views outdoors, but also to provide privacy from other rooms. “By respecting inmates’ privacy, you encourage them to act responsibly and as part of a community,” says Mogensen.

The prison encourages families to visit—providing a playground and accommodations for overnight stays. Before Anstalten, most Greenlanders served their time in Denmark, which made visits difficult and expensive. 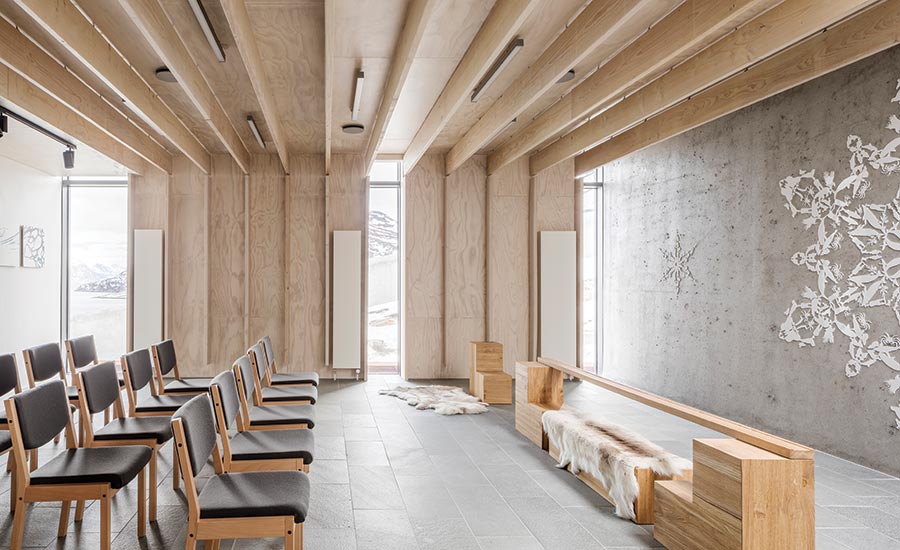 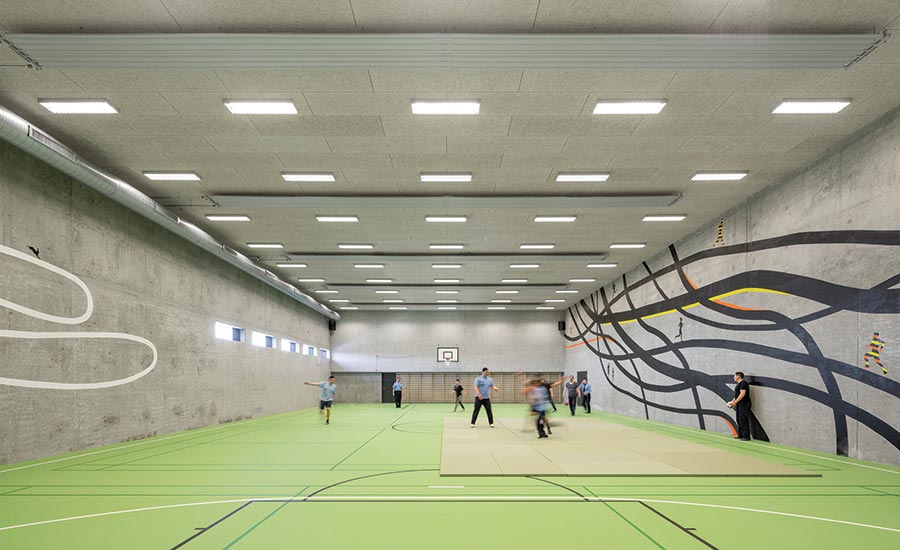 SHL has a long history of building in Greenland, starting with the Katuaq Cultural Centre in Nuuk, which opened in 1997. But Anstalten is the firm’s first correctional facility. Perkins&Will has a policy of not designing prisons, says Rachel Rose, associate principal and director of communication, because they don’t reflect the firm’s values and “commitment to upholding “the broader goals of society.” When Perkins&Will acquired SHL, the Danish firm was already working on Anstalten. “When we reviewed SHL’s portfolio prior to the acquisition, we were impressed with the client’s vision for humane rehabilitation rather than punishment, which is markedly different from the standard U.S. approach to incarceration,” explains Rose.

In recent years, though, some politicians in Denmark have pushed for tougher policies, says Engelbrecht, as gangs have become more aggressive and public perceptions of crime have shifted. In the U.S., the pendulum may be moving in the opposite direction, with the passage in 2018 of the First Step Act, which shortens mandatory minimum sentences in the federal system for nonviolent drug offenses and requires federal prisons to offer programs to reduce recidivism. But American prisons would have a long way to go before their conditions could begin to compare favorably with those in Scandinavia.