It is with pride that Ondřej Chybík reveals he has no driver’s license, and his partner, Michal Krištof, has only recently obtained one. The architects are cofounders of the Czech Republic–based Chybík+Krištof, a 2019 Record Design Vanguard firm, and, Chybík explains, they find that experiencing as many aspects of a city as possible, even (or especially) poor public transportation infrastructure, is essential to their practice. Born in Brno, the country’s second-largest city, both of them were well acquainted with Zvonařka Central Bus Terminal, which makes more than 820 regional, national, and international connections and serves approximately 17,000 passengers each day. In spite of its central location and critical role in the city’s infrastructure, the Brno municipality lost control of the terminal when it was privatized in the 1990s, and it subsequently fell into disrepair. “Zvonařka seemed a dark, unfriendly place,” says the city’s mayor, Markéta Vaňková. A frequent bus rider, Chybík agrees: “It was really the worst place in the city.”

Chybík and Krištof see themselves as activist architects, with a history of seeking out projects that will have social impact. They set out to learn what it would take to rehabilitate the 1980s terminal, a steel column and space frame structure, encircled by a parapet of reinforced precast concrete, designed by architect Radúz Russ. The private entity that rented the terminal’s platforms to bus providers, it turned out, did not make enough money to maintain or renovate the building, but, during a nearly five-year advocacy process, the architects helped secure public funding to finance the terminal’s rehabilitation before taking on the project as designers in 2018.

The terminal before renovation (1) and after (2 & 3). Photos © Alexandra Timpau 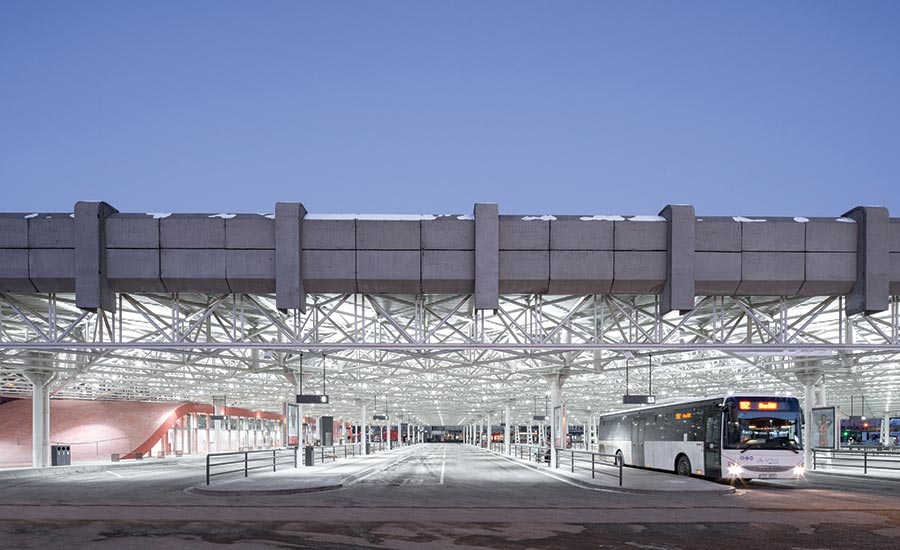 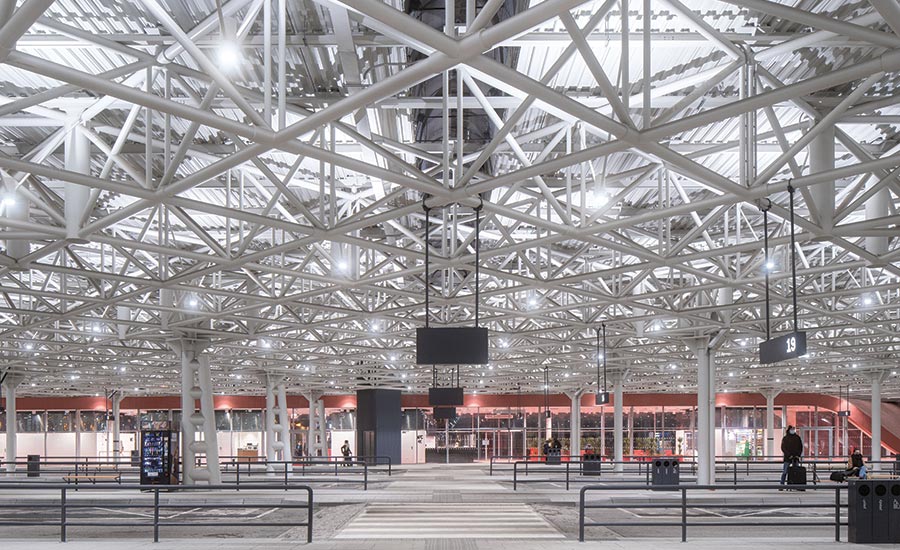 Chybík+Krištof is part of a growing movement to preserve Brutalist-era structures, in hope of saving them from the fate of the now-demolished Hotel Praha and Transgas buildings in Prague. While the Zvonařka terminal is recognized as a Brutalist heritage site, years of neglect and poor add-ons had obscured its architectural pedigree. “There was a lack of light, and the entire space was full of temporary stands with no architectural quality,” says Chybík. After the building—at 107,650 square feet, larger than Brno’s central city square—was emptied of all but its steel columns, and repainted bright white, the architects reconfigured the plan to make it more transparent and accessible. Now the terminal’s vast main hall has uninterrupted pathways and sight lines to signage for arrivals and departures, with an inner space for each bus platform. From the time it was built, up to 100 buses could park on the terminal’s roof—hence its robust structure. The architects were able to add 50 “park-and-ride” spaces while retaining the same capacity for buses, and also a new elevator to connect the parking area with the platforms below. A new passenger hall opens to a very visible entrance on Zvonařka Street, opposite a major shopping center. The hall’s wavelike glass, steel, and concrete form contrasts with the angularity of the original structure and enhances wayfinding. Passenger walkways now flow into the hall clearly from city streets, eliminating a formerly circuitous route. 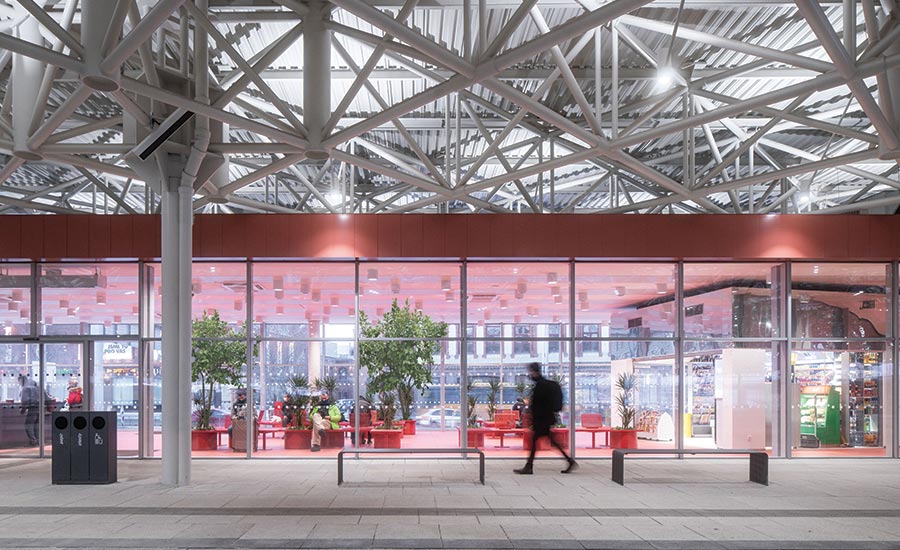 Lighting is crucial to the modernized terminal: “It was project-specific, because the beauty of the steel structure is key,” says Chybík. “We hung the lighting on the steel structure to illuminate it upward, so the structure appears to be floating above the platforms.” The terminal’s original curved skylight, which bisects the roof, was restored to bring in more natural light.

Yet to be completed is a publicly owned entrance plaza, between the building and the roadway. Chybík and Krištof see the station and that surrounding plaza as an essential urban gathering place, and they interviewed many of its users, including homeless people who had called its benches their own for years. “They considered some public spaces we didn’t even see,” says Chybík.

Now the city has added a new tram line to the terminal. “The part of the city where Zvonařka is located has seen considerable development recently,” says Mayor Vaňková. “The area has a huge industrial heritage and now is turning to new purposes.” Nearby is the reconstruction of Mendel Square, a busy hub next to the monastery where Johann Gregor Mendel discovered the principles of genetics in the 1860s, and where Chybík+Krištof are designing a reimagined version of Mendel’s greenhouse.

But the architects say the city’s transportation infrastructure is far from saved: an ongoing architecture competition for a new train station to be built outside the city’s center would erode the street life that adds energy to Brno’s core. But there’s hope that the existing 130-year-old station can remain in use as a vital part of the city. If the architects could spend close to a decade shepherding the bus terminal toward renewal, they may do the same for more of Brno’s other transportation buildings as well. 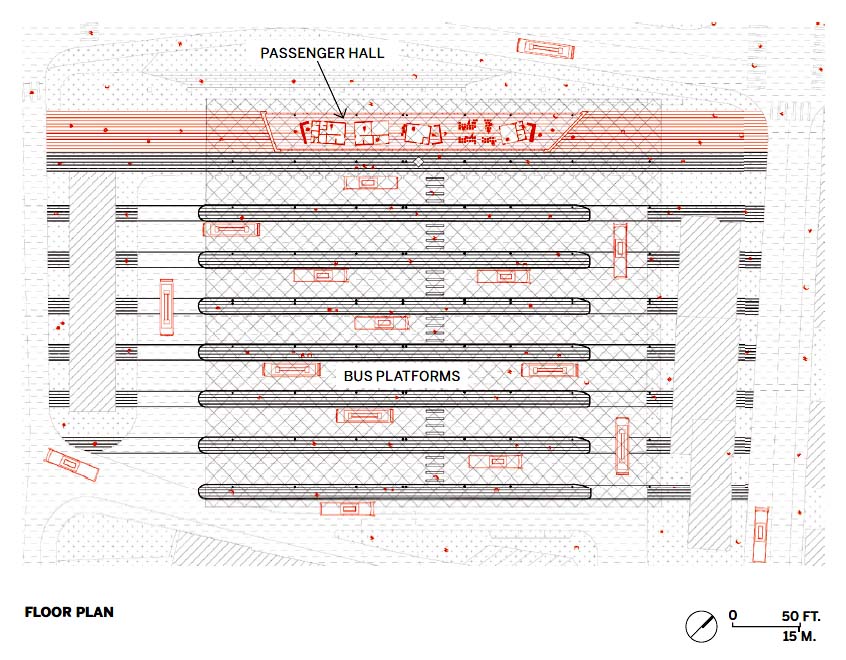