Topped by a monolithic undulating roof, the Takanawa Gateway Station recalls the elegance of the historic European train station—but in the heart of Tokyo. Designed by Kengo Kuma, the building is the first addition in 50 years to the Yamanote Line, the famous elevated train encircling the city center. Also serving the Keihin-Tohoku suburban commuter railway, the building is poised to become a main access point for a 32-acre urban-renewal project spearheaded by the station client, East Japan Railway Company. Titled Global Gateway Shinagawa, the phased development (master-planned by New Haven firm Pickard Chilton) is intended to transform a trainyard into an international business center and is slated for completion in 2040.

Passengers arriving at the station from Dai-ichi Keihin, a key multilane thoroughfare, ascend stairs and traverse a partially covered walkway to enter the concourse, a soaring space extending to the roof. This level includes the station office and restrooms at its north end, while its south end will hold a second entrance when the redevelopment project is finished. Connecting to a pedestrian deck, the additional entrance will also enable passengers to walk to Shinagawa Station, a nearby major transportation hub and Bullet-train stop. Beneath the concourse level are platforms for the four sets of train tracks while, above, balconies flank either end of the linear space, providing places to look down at the hustle and bustle. The entire interior is united by an enormous atrium at the building’s center, which rises up from the tracks to the ceiling and enables air and daylight to flow from top to bottom. Gazing up from the platform, the eye is filled with views of the roof underpinnings and soft light from above. “As they did with 19th-century terminals, we wanted to make one large space,” explains Kengo Kuma. 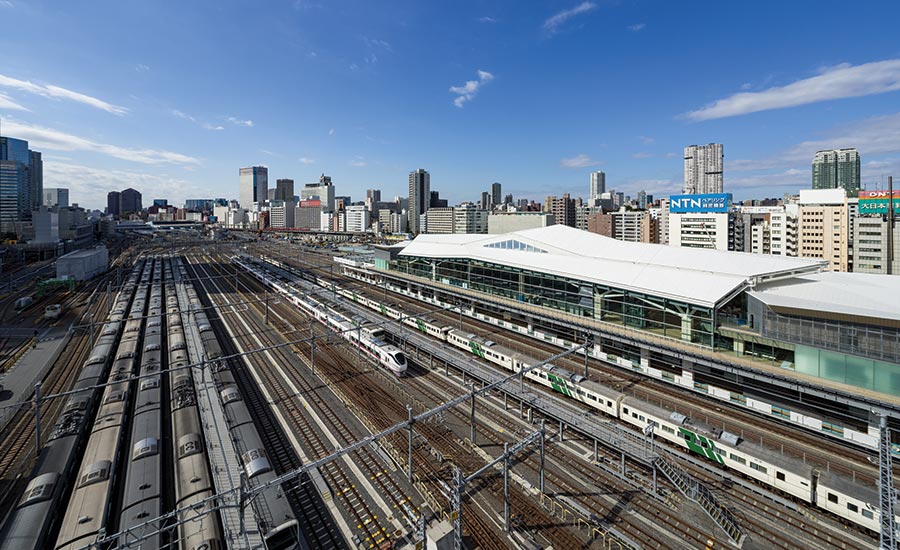 The roof surfaces—resembling shoji, folded like origami—and abundant use of wood, underscore the building’s Japaneseness (above and top). Photo © East Japan Railway Company, click to enlarge.

This idea of a singular voluminous space is underscored by the roof, whose hovering white planes unify the station. Its shoji-like white surface is composed of translucent PTFE-coated glass-fiber sheets arranged in four 394-foot-long ribbons. Inspired by origami paper, each strip is delicately creased with a series of “mountain” and “valley” folds. Where the folds do not align, there are vertical gaps between strips that, filled with panels of transparent ETFE plastic, function as clerestories. “I wanted to see the sky from the station,” says Kuma. The architect also wanted the building to “breathe,” a feat achieved by inserting a 7-foot gap between the roof and the curtain wall. While deep eaves prevent rain from entering the building, these gaps provide sufficient natural ventilation to eliminate the need for mechanical air-conditioning except in the lavatories and other enclosed areas. The transparent outer walls, made of floor-to-ceiling glass secured in steel frames, enable a strong visual connection between the station interior and the surrounding neighborhood—especially at night, when uplighting illuminates the roof and the building glows, in the words of Kuma, like a chochin lantern. 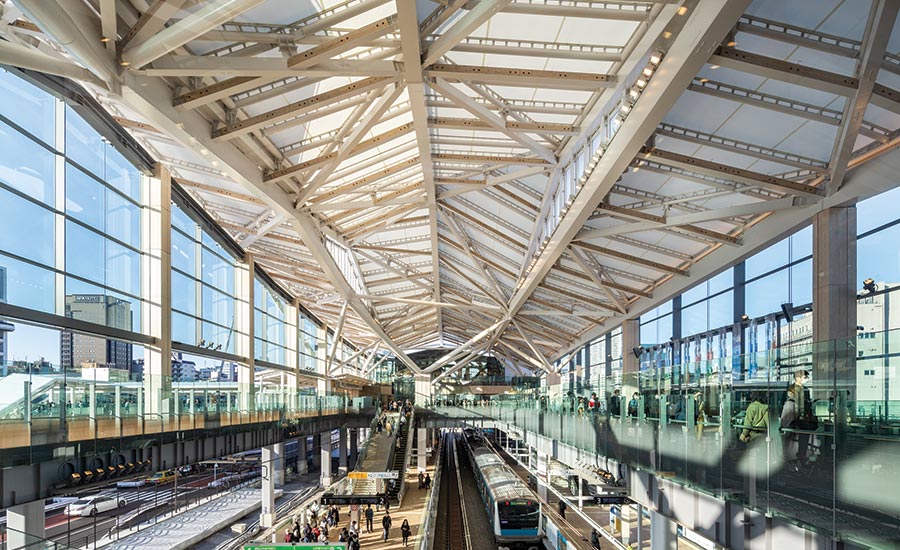 Floor-to-ceiling glass connects passengers to the outside and makes the roof appear as a floating canopy. Photo © East Japan Railway Company

Integrated within the curtain wall are wood-clad steel columns supporting the roof perimeter. In the concourse, the roof is held up by eight more columns, tree-shaped and strategically located to impede pedestrian traffic as little as possible. Also made of wood-clad steel, these members’ 5-foot-square trunk-like bases are topped with steel tubes that radiate outward, resembling branches. High-tension bolts join the roof structure’s wood and steel, ensuring their tight connection even when trains come rumbling through below. 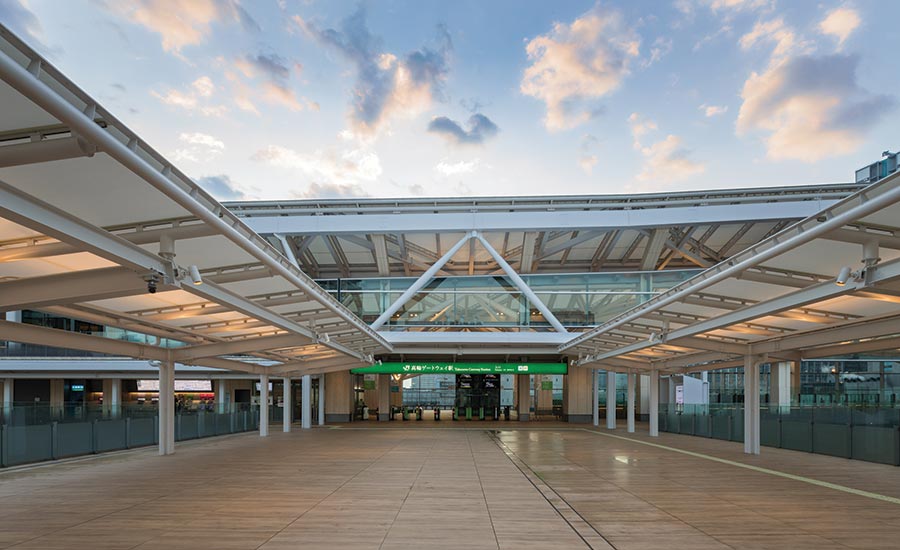 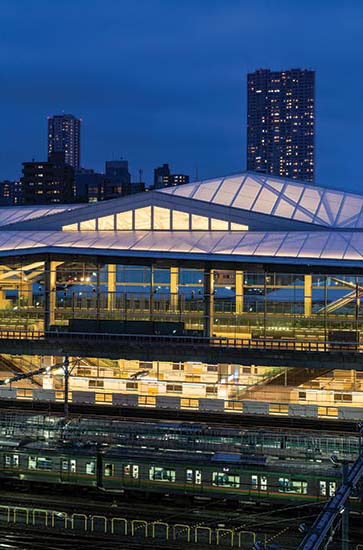 The roof structure is visible throughout the station (1 & 2) and, at night, from afar (3), as the building glows like a lantern. Photos © East Japan Railway Company

Kuma used a similar hybrid system for the roof trusses in the Japan National Stadium, built for the 2020 Tokyo Olympics. In many ways, wood, the medium of traditional Japanese architecture, is Kuma’s signature. He has used it across the country in museums, municipal centers, academic buildings, and other projects not regularly associated with timber construction. “In the station, we used wood everywhere to let visitors feel the Japanese space,” he explains. Like the structural components, the interior soffits are clad with cedar from Fukushima Prefecture. For fire protection and ease of maintenance, many of the wood elements were treated with a fire-proof glass coating and tinged with white paint to match the roof, while letting the grain show through. Outside, where the material also needed to be able to withstand water exposure, engineered New Zealand pine was used for wall cladding beneath the roof. Even the platform’s tiled floor has a woodgrain pattern. Unexpected in a heavily trafficked transportation hub through which 130,000 passengers will eventually pass every day, the wood softens the hard surfaces and cold metallics typical of station buildings.

The use of wood is especially evident on the platform level in the Kuma-designed bentwood benches and hip-height bars that passengers can lean against while waiting for their train. Manufactured in Yamagata Prefecture by Tendo Co. Ltd, the venerated furniture factory that first produced Sori Yanagi’s Butterfly Stool, both seating elements are made of molded cedar plywood, and their curving forms are as easy on the eye as they are on the body. 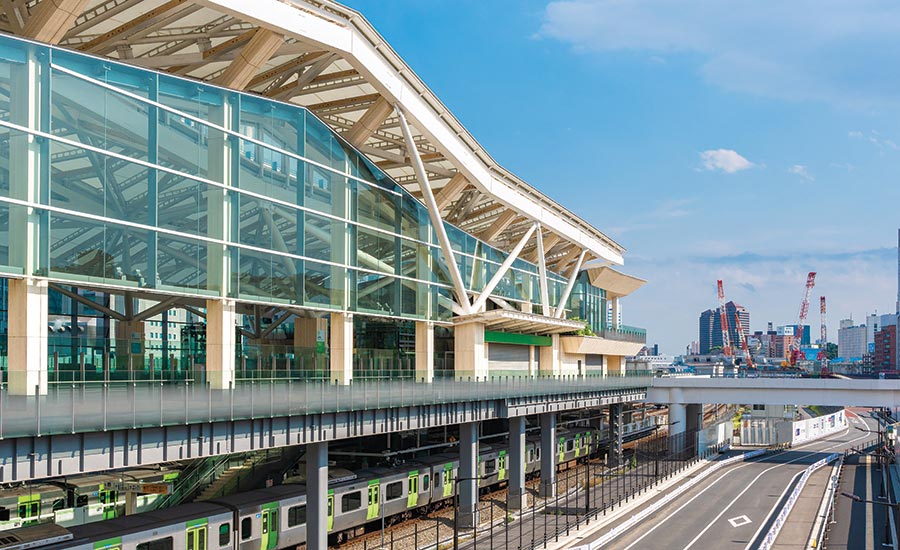 Between the presence of wood and the origami-like roof, with its reference to lanterns, the Takanawa Gateway Station bows politely to traditional Japan. Its individual components are employed with the refinement, grace, and exquisite craftsmanship we have come to expect of a Kengo Kuma building. Rendered at a large scale and with a high degree of abstraction, the station’s Japaneseness is legible but without being kitsch or commercial. 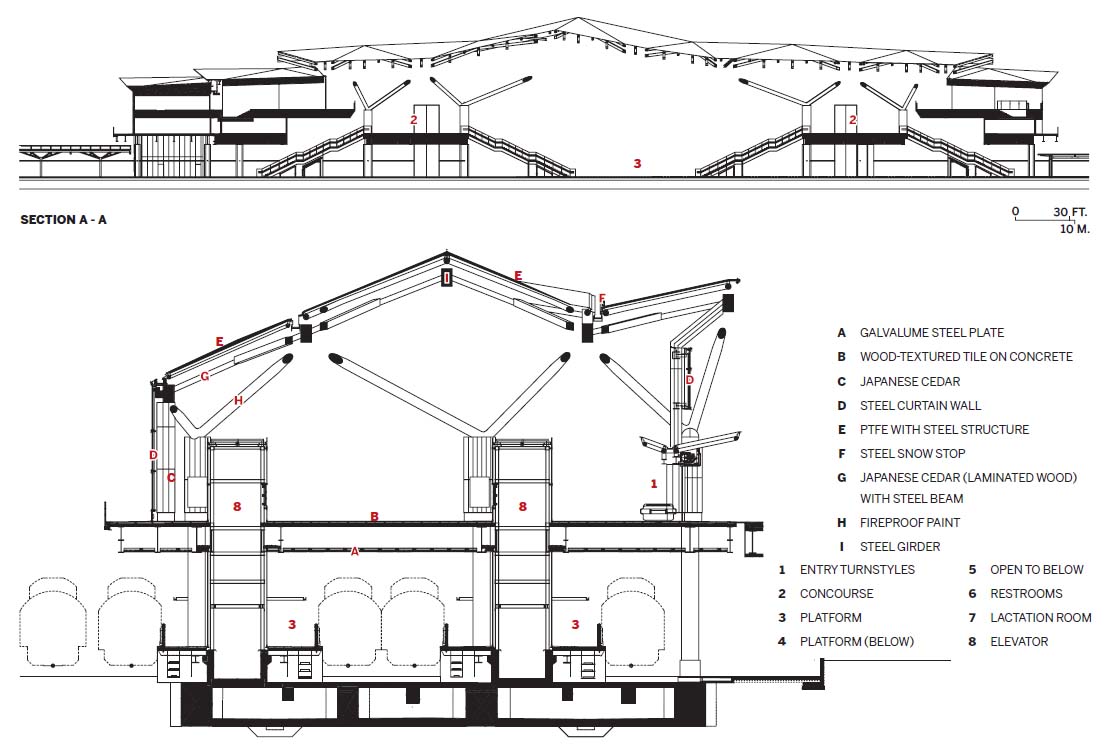