“If you dig a hole in New York City, it costs a million dollars and generates a million meetings,” jokes Mark Yoes, design principal at WXY. The design process for the Robert R. Douglass pedestrian bridge, which crosses West Street in lower Manhattan, backs up his point. Seven years and $45 million later, just before the 20th anniversary of 9/11, WXY has completed the last piece of the Lower Manhattan Development Corporation’s (LMDC) plan for rebuilding and restoring the area below Houston Street affected by the destruction of the World Trade Center towers. For the New York–based architects, the 240-foot-long walkway bookends two decades of work—the firm also helped with LMDC’s first project, restoring the Battery Park City esplanade and assisting with the disaster-recovery plan in 2001. “Now people can cross the bridge and not think about any of those things,” says Claire Weisz, principal in charge at WXY. 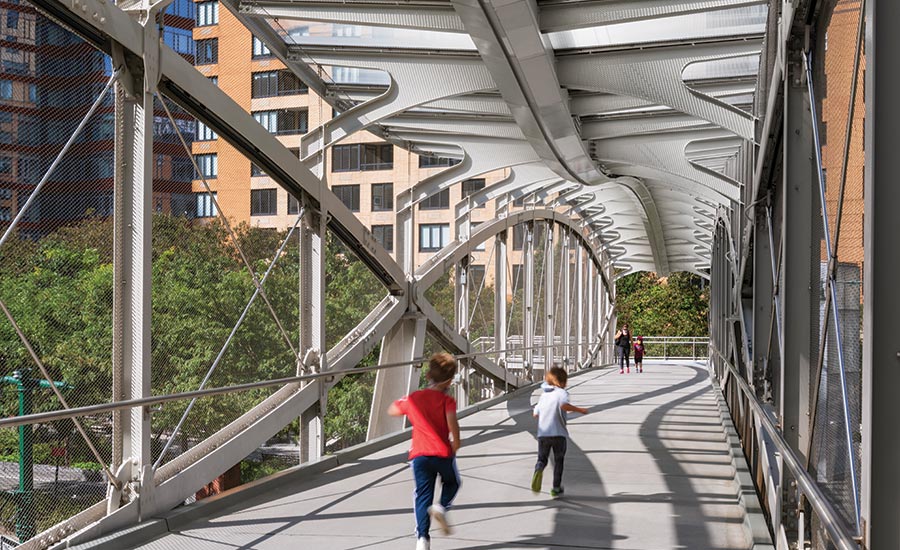 Connecting the Financial District to Battery Park City, both bridge approaches are accessible by stair and elevator and are illuminated by LEDs (above and top). Photo © Albert Vecerka / Esto, click to enlarge.

Named for Robert R. Douglass, the late LMDC board member who led post-9/11 efforts in Manhattan, the new structure replaces SHoP Architects’ interim Rector Street footbridge one block north. “It was very controversial,” says Weisz. “Even though Rector Street was a temporary bridge that was built to be dismantled and recycled, people wanted it up.” And although it became a neighborhood fixture over the years, a replacement—by WXY—was still needed, as it wasn’t built to last.

Working with the New York City Economic Development Corporation (NYEDC) on a project funded entirely by LMDC’s federal funds meant the architects needed to adhere to extra layers of rules and regulations. (Both NYEDC and LMDC are clients of the architects, though the Battery Park City Authority maintains the bridge). For example, WXY had to ensure that the structure’s steel was American-made, per the FTC’s Buy America program. Fabricated in steel shops in upstate New York and in Pennsylvania, the bridge was assembled off-site, stored in Brooklyn’s Red Hook neighborhood, and delivered to the downtown water’s edge by barge. It was then hoisted over the Battery Park City esplanade by crane. “The need to assemble it quickly was a major driver of the whole design,” says Yoes. For two nights in a single weekend, traffic on West Street was closed for 20-minute increments while the bridge was erected.

For this reason, it was especially important that the materials were lightweight for efficiency and ease of transport, according to Courtney Clark, associate principal at Thornton Tomasetti, the structural engineers. “We didn’t have room for a big foundation,” Clark says, explaining why the team created a lightweight superstructure of steel trusses and a fiber-reinforced plastic deck. The distinctive curved lenticular truss design and its spans—there are two, due to weight—are supported by three individual steel buttresses. According to Clark, the bridge’s central pier, in the road median, misses the Brooklyn-Battery Tunnel “by a few feet,” and the eastern end is constrained by underground utility lines, hence requiring a larger west footprint with an A-framed pier. 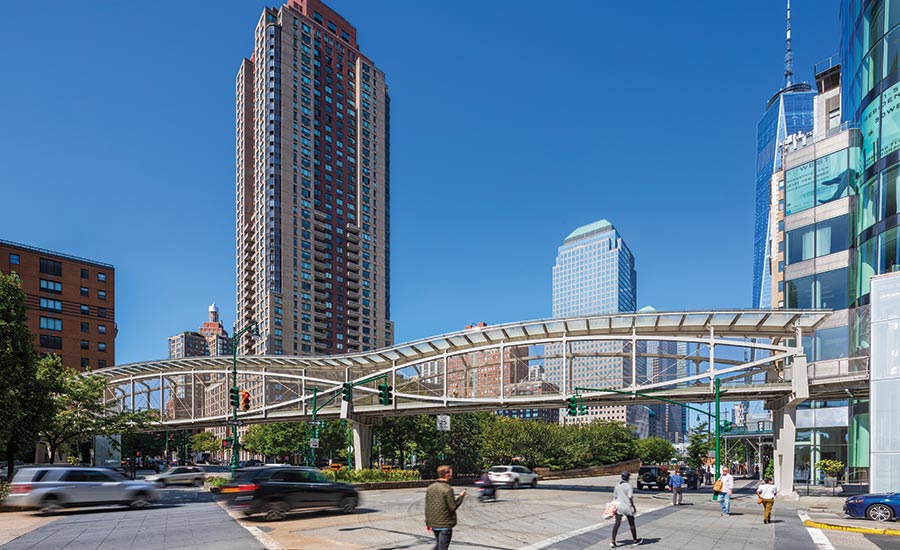 Across both spans, a glass roof with convex steel supports provides lateral bracing and shields people from the elements while still admitting daylight to the passageway below. Along the elevated path, diamond steel mesh is used as fencing—to prevent jumping or falling—while allowing for air movement and a sense of openness. “With infrastructure, it’s important to look at codes as a warning, but not as something to design to,” says Weisz. Above the traffic and several blocks from the water, the gentle sea breeze and shaded walkway are a welcome respite from the heat and create a low-energy microclimate for comfortable crossing. (Though in the winter, the gusts may be less refreshing.)

“There are two goals when you do a public-space project,” says Weisz. “You want to make what’s already there look better, and you want it to feel as if it was always there.”

From above West Street, there’s a good chance the professionals who work in the Financial District and the families who live in Battery Park City will focus on the whoosh of the cars below, the dramatic shadows cast by the arched steel roof supports, and the stellar view of One World Trade Center to the north. It’s impossible to ignore how the skyline has changed, but easy to forget the bridge hasn’t always been there.

Why did the bridge cross the river? To be installed over West Street. Watch a time lapse video that shows the delivery, assembly, and construction of WXY’s new pedestrian bridge in downtown Manhattan. The steel trusses were fabricated offsite in upstate New York before being stored in Red Hook, Brooklyn, and barged up to Battery Park via the Hudson River. Video courtesy Skanska. 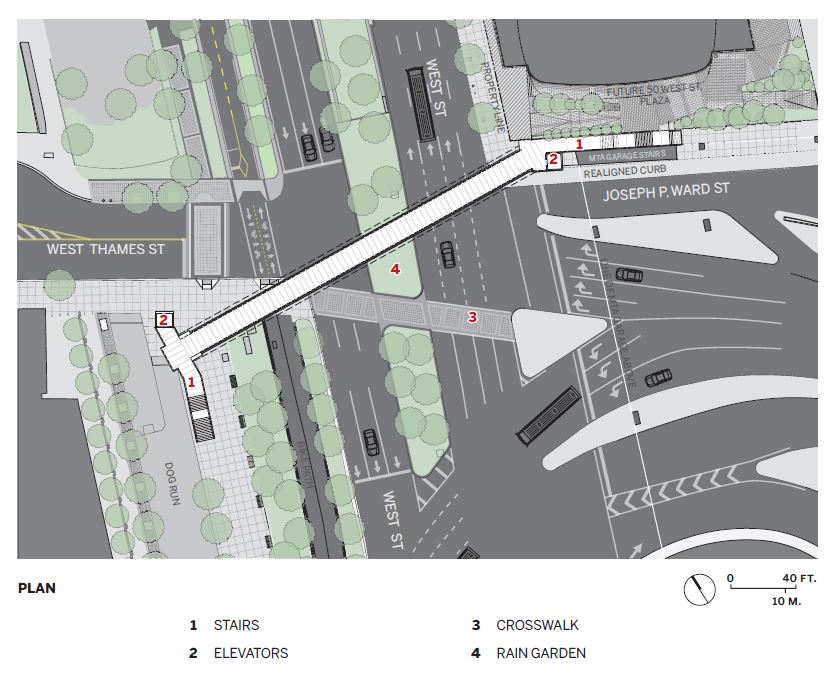 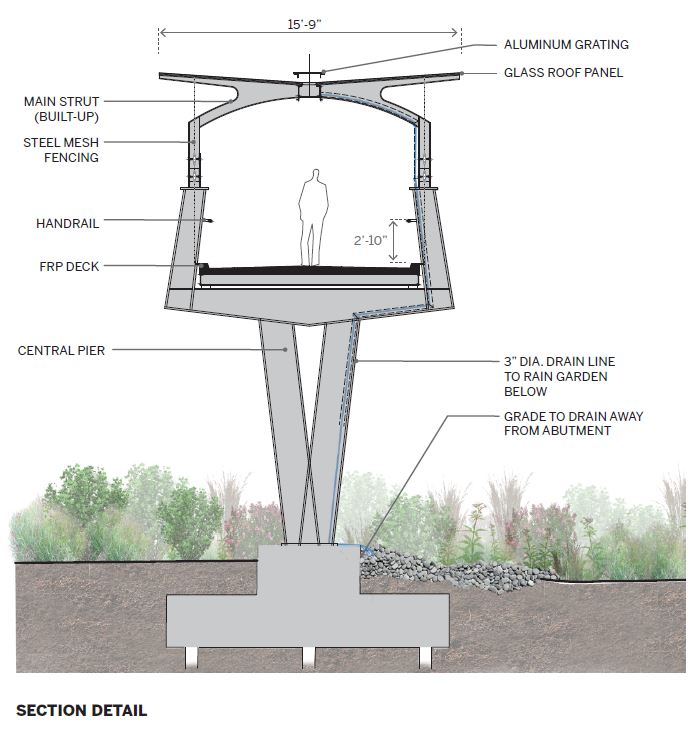