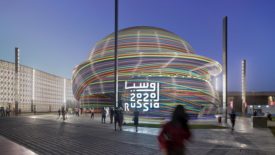 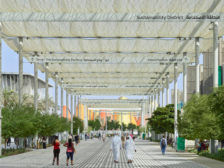 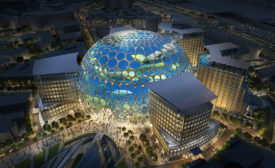 Still labeled Dubai 2020, the World Expo will open on October 1, complete with a centerpiece dome by Adrian Smith and Gordon Gill. 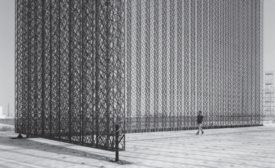 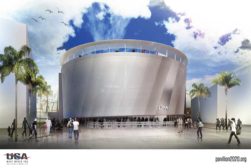 The cylindrical building will include a ride by Virgin Hyperloop One. 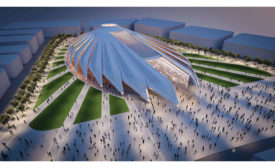 Working under a compressed timeline, Curtis Fentress expects the endeavor to finish “in the nick of time.” 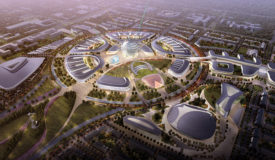 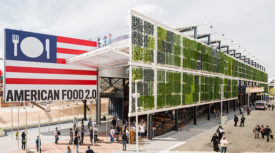 Fred A. Bernstein
One Comment
Since the 1990s, the U.S. State Department has been barred from spending public funds on world expo pavilions. The result has been a series of disasters: the U.S. was a no-show at the expo in Hanover, Germany, in 2000; it then built lackluster, overly commercialized pavilions for the 2005 and 2010 expos in Aichi, Japan, and Shanghai, China.
Read More 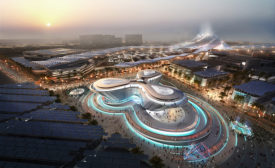 The designs center on three themes: mobility, sustainability, and opportunity.
Rebecca Seidel
No Comments
Foster + Partners, Grimshaw Architects, and Bjarke Ingels Group (BIG) will design a trio of pavilions for Expo 2020 in Dubai. The three firms beat ten competitors in a global competition whose results were announced on March 12.
Read More

Fred A. Bernstein
No Comments
Open since May 1, this tightly packed world's fair of architectural hits and misses runs through October 31. UK Pavilion by Tristan Simmonds in collaboration with BDP and Stage One. The first world exposition, held in London in 1851, occupied Joseph Paxton's Crystal Palace. But during the last century, expos (also called world's fairs) evolved into collections of national pavilions that competed for attention with novel and grandiose building designs. The Shanghai Expo in 2010 kicked off the “Asian century” with a show of architectural pyrotechnics that reportedly attracted 73 million visitors. The theme of Expo 2015 in Milan is
Read More
More Articles Tagged with 'World Expo'
Subscription Center
More Videos