Switch House West is the first of three residential sections to be completed in a remarkable transformation of the landmarked Battersea Power Station, in London, that will eventually include retail, hospitality, event, and office space as well. While it provides a relatively small number of new apartments—just 94—Switch House West represents a key moment in the redevelopment of this culturally significant, gargantuan building. It gives an early positive indication that what is effectively a sensitive rebuild, rather than a restoration, has been successful. 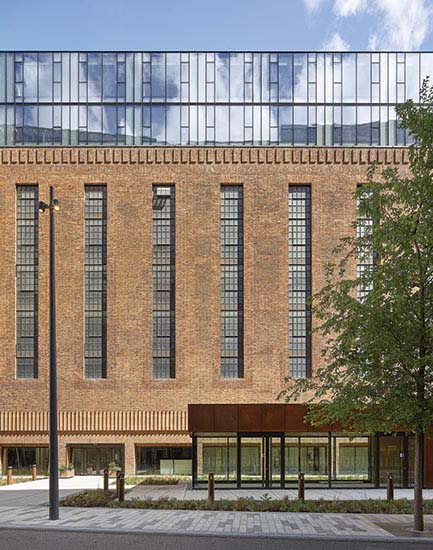 The west-facing facade of the renovated landmark (above and top) displays the building’s new fenestration and glazed addition. Photo © Hufton + Crow, click to enlarge.

Made famous by a Pink Floyd album cover and numerous films (cult favorite Dr. Who and the Dark Knight among them), the genuinely iconic Power Station is an enduring urban presence on the approach to London from the west, albeit one that now has new high-rise residential towers that are part of the wider Battersea Power Station redevelopment clustered around it. The existing building was originally designed by J. Theo Halliday and Giles Gilbert Scott and constructed in two phases, one between 1929 and 1935, and the second in a more drawn-out process that concluded in 1955.

After it was decommissioned in 1983, the power station suffered. The nearly 2 million-square-foot building and surrounding development site of 8 million square feet has changed hands numerous times since that date, all while the structure slowly deteriorated. One early scheme to turn the power station into a theme park, including a skating rink and a roller coaster, got as far as removing the roof to strip out the machinery, leaving the building exposed.

By the beginning of this century, the main part of the building, the Boiler House, was effectively a shell. The turbine halls on either side were in a slightly better condition but still needed a huge amount of labor just to consolidate the brickwork, even before reinforcing the structure to support reuse. Steered by the project’s lead architect, WilkinsonEyre, the construction team restored the building’s fabric, adding new brick, which has been patched perfectly into the old. The majority of these 1.75 million bricks needed for the renovation were made by the same company that provided the 6 million original pieces in the early 20th century. Because the construction of the building took place over 20 years and the blend of brick used during this time varied, three different combinations of 10 colors were created to match the existing condition. 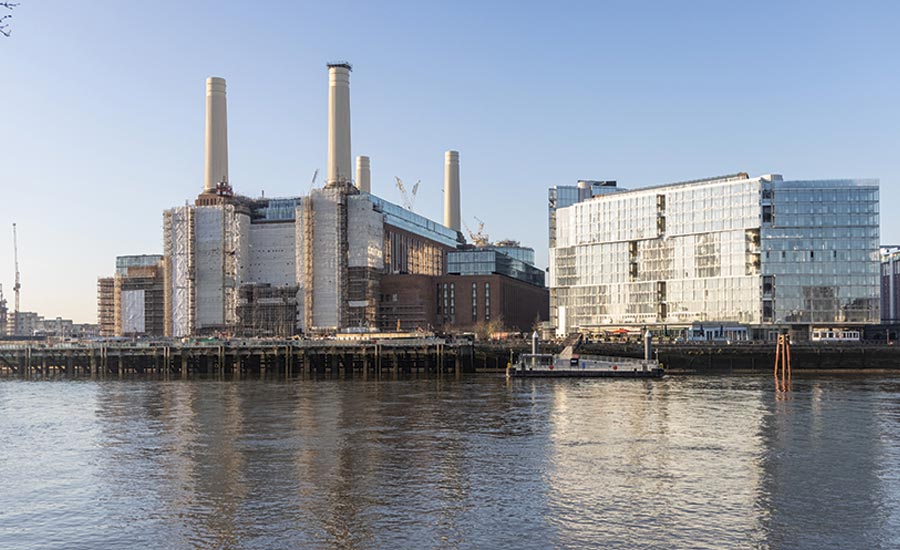 Switch House West sits next to the main power station, across from the development’s Phase 1 by SimpsonHaugh and Partners. Photo © Hufton + Crow

The two switch houses, on the far side of each turbine hall, contained the switch gear and battery and assembly rooms necessary to direct the generated electricity onward. Today, the switch house on the east is still being restored and converted for residential use, while the one on the west is ready to welcome its first occupants. Known as Switch House West, it is within the historic structure of the Power Station, but the architects were allowed to add three glazed floors on top of the old brick structure, creating nine floors in total. A landscaped courtyard was created on the roof of the adjacent Turbine Hall for the new residents. The all-new upper floors are legible as a separate section and consist of apartments on one or two levels, with as many as four bedrooms, most with their own private terraces, roof gardens, or both.

To establish the new floors and walls for Switch House West, the architects inserted a central concrete core and a grid of steel columns and beams that they connected to that core; this system also reinforces the facade. Steel frames have been inserted into the facade to create narrow slot windows (46 feet long and 5 feet 5 inches wide). These frames are bolted and welded to the new steel grid and then wrapped very tightly in brick, the same way as in the original structure. 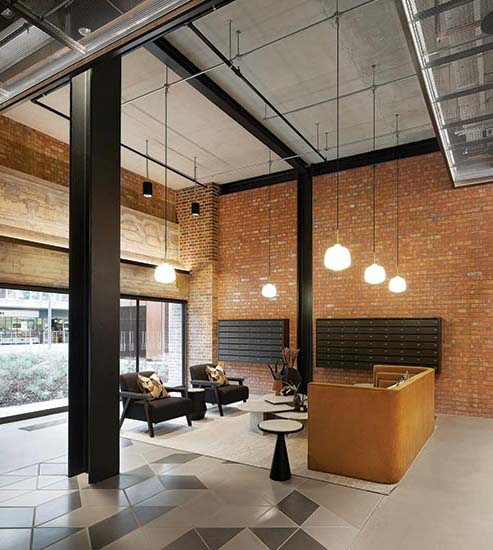 New steel structure in the lobby is embedded in the brickwork. Photo © Hufton + Crow 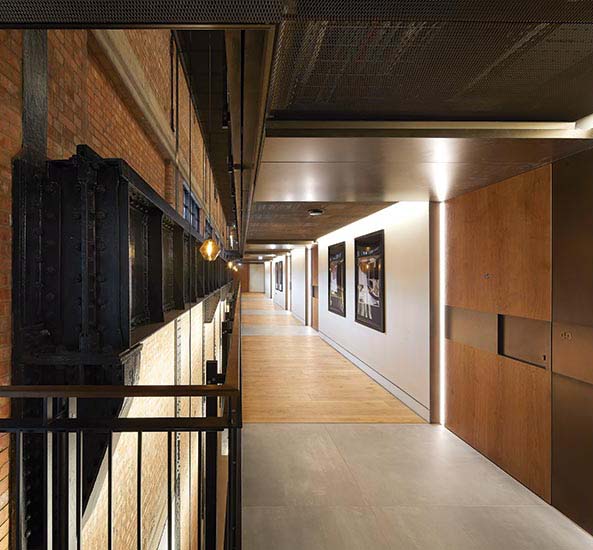 The corridors were set back to reveal the expanse of wall that separates Switch House West from the adjacent Turbine Hall. Photo © Hufton + Crow

Much work has been done to make the building’s scale amenable to habitation. The Switch House is 492 feet long, and enclosed corridors along that distance would have been monotonous. To remedy that effect, the architects left a narrow gap in the flooring of the corridors at each level on the side of the building adjacent to the Turbine Hall. This allows for a full appreciation of the building’s height at each floor, as passersby look up at the exposed wall.

The windows are particularly ingenious additions, as they are effectively vertical extrapolations of original, smaller mullioned windows. From the exterior, the fenestration around the facade rises from the second to sixth floor, with its units 10 feet 6 inches apart. This interrupts the daunting mass of brick and accentuates the Art Deco finned brick detailing of the original building. From the interior, they provide floor-to-ceiling glazing to each apartment. 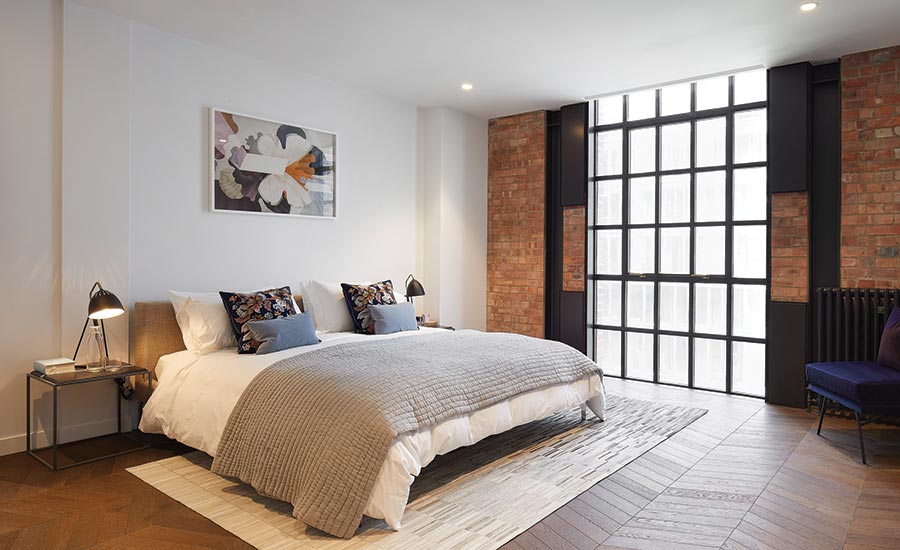 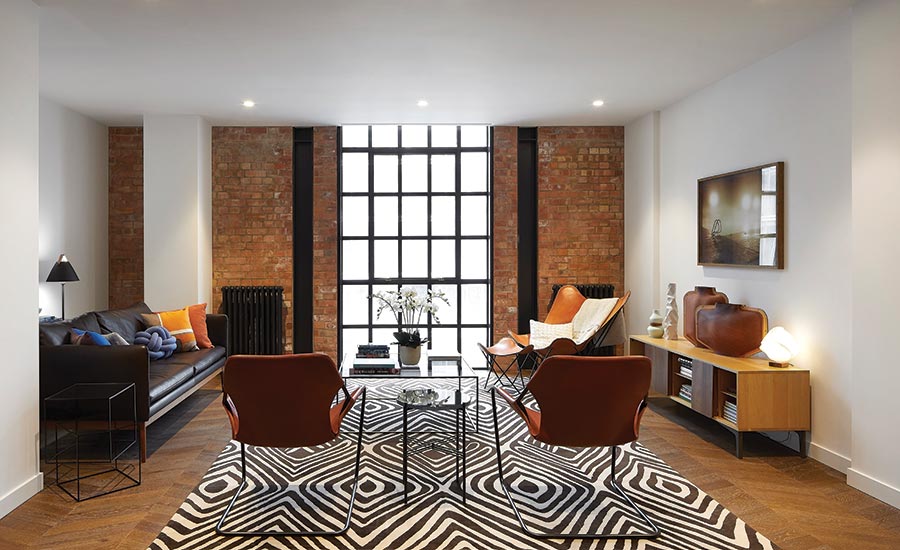 In the new section above, the apartments are larger and have more private outdoor space. Accommodation within the existing walls of Switch House West consists of studios and one-, two-, and three-bedroom apartments, including some duplexes, all featuring the brick and steelwork that date back to the 1930s. Exposed brick creates an instant visual cue of loft living, which prompts an industrial decor. 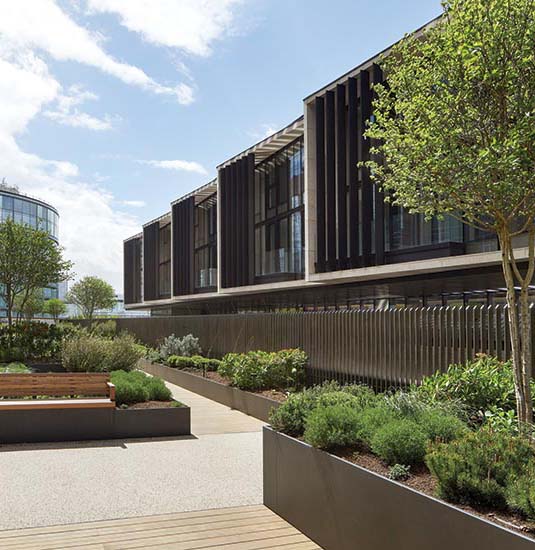 Bronze paneling, concrete, timber floors, and metal-mesh ceiling tiles dominate the communal areas, lobbies, and corridors. Inside the apartments, the interior architect Michaelis Boyd has created several palettes for finishes that draw on existing details from the original building, such as the dark herringbone-parquet flooring in one of its control rooms. This design scheme is complemented by custom brass light switches and Art Deco–style door handles, designed by WilkinsonEyre, used throughout Switch House West and planned for the rest of the Power Station build-out.

If Switch House West is any example, the Power Station will be a Gesamtkunstwerk of thoughtful historical reuse—from the detailing of its hardware all the way up to the massive structural support work—guided by a sensitivity that relies as much on imagination as on historical fact. The retail component in the two former turbine halls and the offices in the old Boiler House are set to open in spring 2022.

It is strange that this historical sensitivity has not been reflected in the massing of the new construction around it. Residential buildings now crowd the Power Station, particularly Phase 3A, which comprises 1,300 apartments designed in an eyewatering partnership between Norman Foster and Frank Gehry. Given the attention to detail in the historical fabric of the Switch House—in the ingenious and very successful use of a series of brick blends on the facade, for just one example —it is incongruous that little consideration has been given to the legibility of the historical structure within the surrounding area.

The Zayed Centre by Stanton Williams