Finnish architect Anssi Lassila, founder of the 20-person firm OOPEAA/Office for Peripheral Architecture, in Helsinki, was only 4 years old when Aarne Ervi, known as a master of Modern architecture, died in 1977. But Lassila grew up admiring his predecessor’s work. “Even though Ervi was of a younger generation than Alvar Aalto, he worked with Aalto in the 1930s,” says Lassila, “and he had a strong influence on the functionalist style of architecture in Finland.” 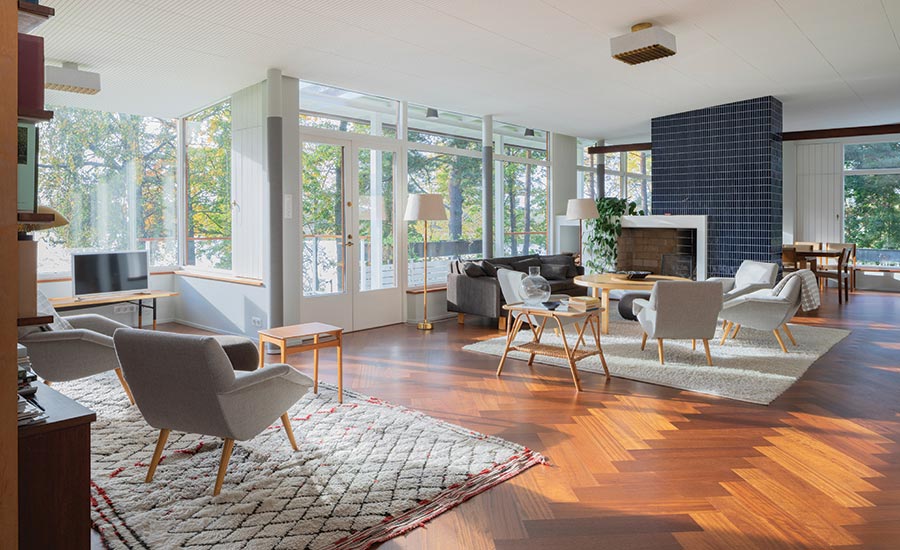 Lassila was thrilled when his firm was asked to renovate the Villa Koivikko in 2017, a landmarked residence that Ervi designed in 1958, on a forested lakeside hill just outside Helsinki. (Koivikko means “birch grove.”) The villa’s new owner told Lassila he planned to use the 2,700-square-foot house on weekends and holidays, year-round. His brief was to make it a place where the family could relax while he, an author, focused on his work in a new, separate 540-square-foot studio. His only requirement? Any new buildings had to be of the same high caliber as the original villa and the caretaker’s house.

“Our starting point was to really celebrate the beauty of Ervi’s architecture, then to add to the complex in a way that would meet the needs of the current owners and their lifestyle,” Lassila says. Studio Petra Majantie acted as the interior architect and client’s representative on the project.

The villa is poured-in-place concrete with a white-brick and iroko-wood facing; for the caretaker’s house, Ervi used concrete block. “Ervi was eager to experiment with new technical solutions and innovative materials,” Lassila says. “But many of the materials he selected turned out not to endure all that well. For example, the thermal insulation totally evaporated and turned into dust.” Lassila installed new insulation, geothermal heating, and updated the HVAC systems while meeting the requirements for renovation set by the landmark authorities.

Off to one side of the villa, midway down the steeply sloping hill to the lake, Lassila designed a new car shed with two open ends, like a covered bridge. On the opposite side of the villa, he decided to build the writer’s studio on top of a stone cellar. By removing the cellar roof, he was able to add a second floor, with a glass facade overlooking the lake. Both garage and studio are covered with tarred wood shingles extending from their pitched roofs to the ground, 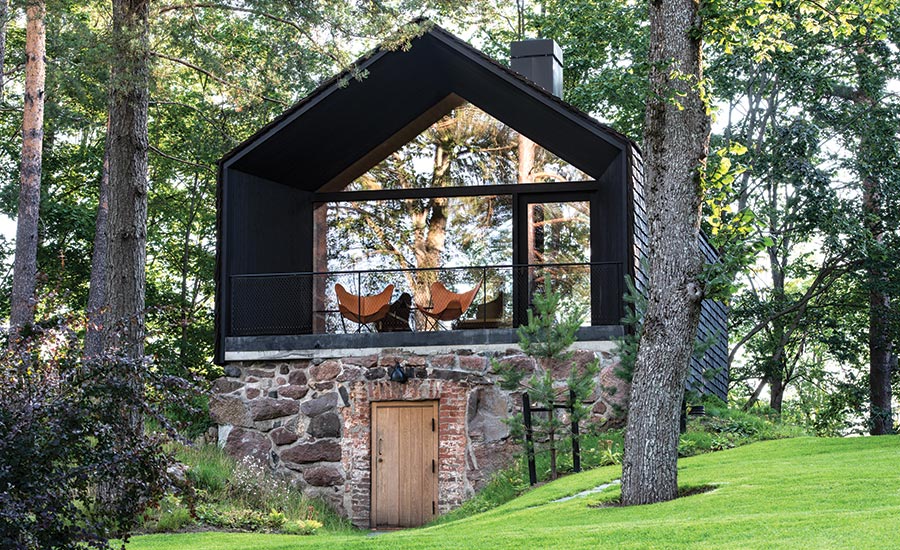 Besides renovating the villa and caretaker’s cottage, architect Anssi Lassila designed additional structures. One, a writer’s studio (1) is built atop a stone cellar. Its interior (2) is lined in spruce. Photo © Sakari Majantie (1), Angel Gil (2) 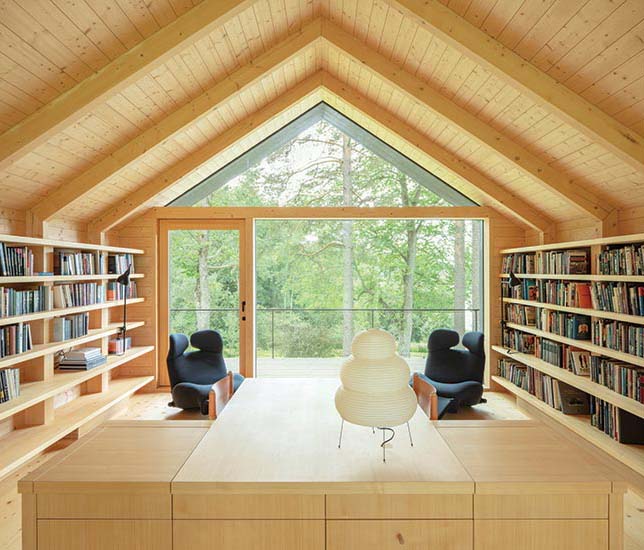 “Tarred wood in Finland appears on church roofs and old buildings because it offers good weather protection and is long-lasting,” Lassila says. “I didn’t want to compete with the original white buildings; I thought the new structures should avoid being the center of attention, and try to blend in with nature.”

The interiors of the studio (as well as the new black-waxed traditional wood sauna with a grass roof, next to the lake) are sheathed inside with pale spruce. “The interiors’ light-colored wood is visible from the outside,” he says. “The buildings seem to glow at night.” 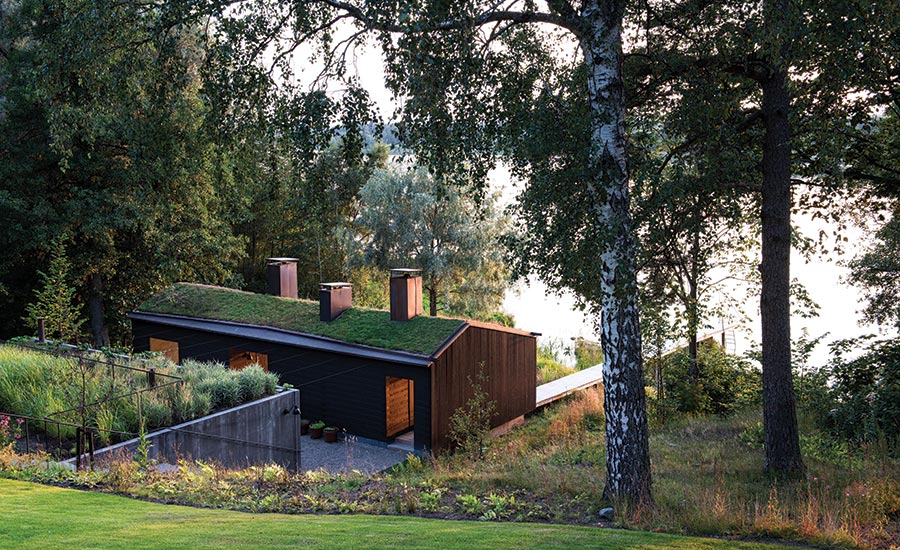 Another new building, a sauna, is covered with tarred wood and a green roof Photo © Sakari Majantie

Lassila felt that the work on the villa was especially inspiring “because of the rich layers of dialogue” involved. Others agree: it has been nominated for the 2022 European Union Prize for Contemporary Architecture/Mies van der Rohe Award, to be announced next spring. Whatever the outcome, here the architect and his team have sensitively balanced the strong horizontal lines and light exteriors of 1950s Modern architecture with discreet dark-wood vernacular additions, to create an arresting ensemble. 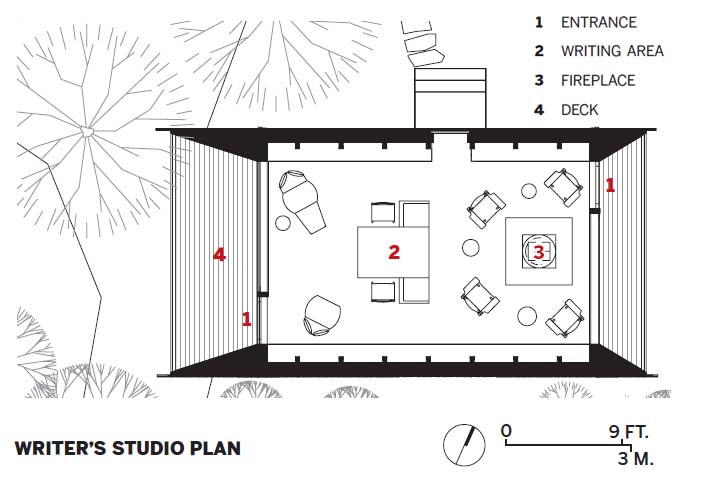