Located in the mercantile sector of old Tokyo, Kappabashi is Japan’s cookware capital. Historically, the neighborhood’s shops catered to professional chefs and restaurateurs. More recently, home cooks have become their bread and butter. Since many of these family-owned businesses have been hawking their wares for generations, the shift in clientele has often required—while retaining a sense of history—rebranding as well as rebuilding. In his redesigns for the shops of Majimaya, a seller of confectionary tools founded in 1912, and Kama-Asa, a knife purveyor that started four years earlier, architect Masahiro Yoshida, director of the Tokyo-based KAMITOPEN, deftly balances the old with the new.

Specializing in small-scale retail and commercial works, Yoshida got his first Kappabashi commission some 10 years ago when he renovated the knife shop’s former store on the same site, which he refashioned with a browser-friendly open-floor plan and accessible carousel-style displays. After seeing his neighbor’s new interior, the head of Majimaya wanted an update of his own. This time the client didn’t just want a makeover. He wanted an entirely new building. 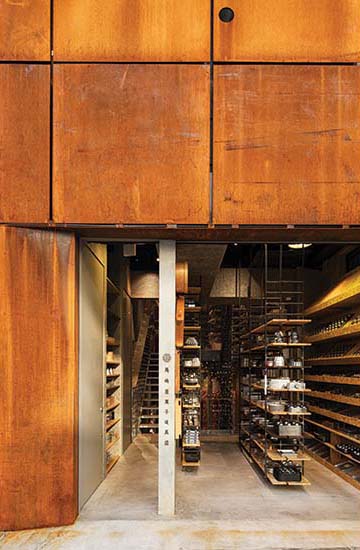 Open to the street, framed by a facade of weathering steel, the Majimaya shop’s stocked shelves attract customers (above and top). Photo © Keisuke Miyamoto, click to enlarge.

Like many stores on Kappabashi’s arcaded main street, Majimaya’s headquarters struggled to lure window-shoppers inside. They also needed an innovative way to present their inventory of some 3,000 metal molds and cookie cutters, too many to show on their narrow ground floor. The challenge Yoshida faced as he developed the necessary multilevel scheme was not only how to get customers to enter the store but also how to draw them upstairs to explore the shop’s array of implements. His response was a four-story building that fronts the street with a windowless rust-colored Cor-Ten steel facade. It contains an additional basement, sales areas on the lower three floors, workrooms on the fourth, and an event space plus a roof terrace at the top. Dividing the floors into nine half-levels, a large staircase occupies the middle of the plan. “It’s not such a big deal to walk up half levels,” says the architect. 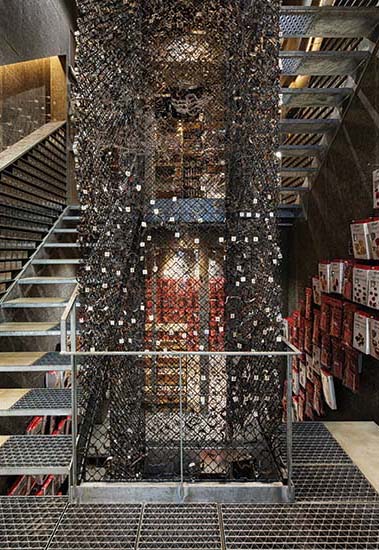 The towering chain-link-fence screen is surrounded by the building’s central stair and parallel to a wall of corresponding storage drawers. Photo © Keisuke Miyamoto

Much more than a mere circulation conduit, the stair is the shop’s showpiece. Turning a presumed deficit into an asset, Yoshida took advantage of its central position in plan and created a vertical display upward through its core. “At first the clients had no idea what I was talking about,” muses Yoshida, “but they really trusted me.” While ascending the gracious 10-inch-deep, concrete and steel-mesh treads, customers can freely examine the tools, which dangle from the chain-link-fencelike screen that wraps the stair’s skylit void. Each mold is tagged with a number correlating to one of the brick-shaped tin-plate boxes that line the opposite walls. 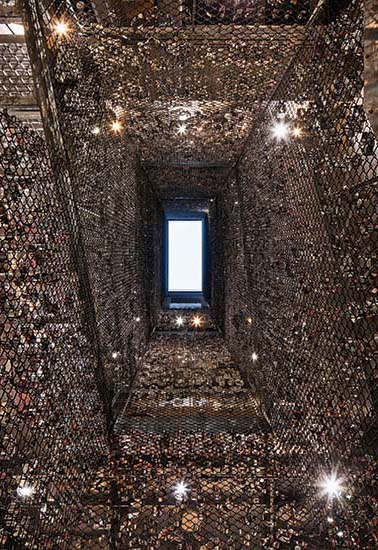 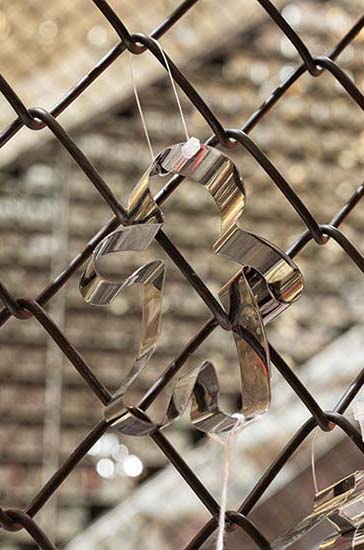 Having been in production since the immediate post–World War II period, the shiny metal boxes are a throwback to another era. They are also emblematic of Yoshida’s seasoning the new shop with a dash of nostalgia. From the original lettering of Majimaya’s previous home—adorning the wall of the roof terrace—to the patterned glass panels salvaged during its deconstruction and the wood molds crafted by a now-deceased employee mounted above the cash register counter, the architect sets off a palette of industrial materials with valued artifacts of the past.

In turn, Majimaya’s new home inspired the head of Kama-Asa to hire Yoshida to design a new building for his company. While Yoshida’s interior reboot of the existing space had boosted sales by attracting general customers, it came at the cost of the shop’s professional clientele. Yoshida solved this problem with a four-story structure containing separate sales areas for casual cooks and full-time chefs on the first and second floors respectively. The two showrooms are connected by an open stair and a void on either side of the shop’s main entrance. The third and fourth floors hold storage and an event space with an adjoining roof deck. Intended to invite customers inside, glass window walls front the two sales floors, while cement panels, tinged gray-black (Kama-Asa’s signature color), shield the upper levels from view. 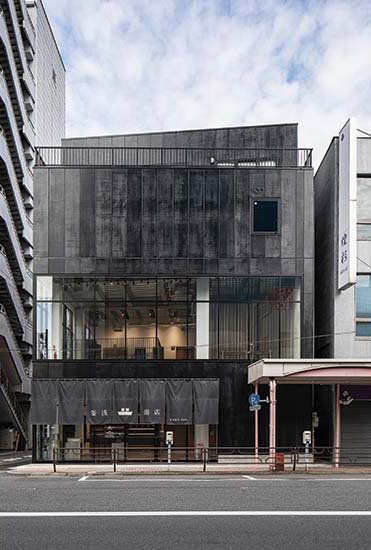 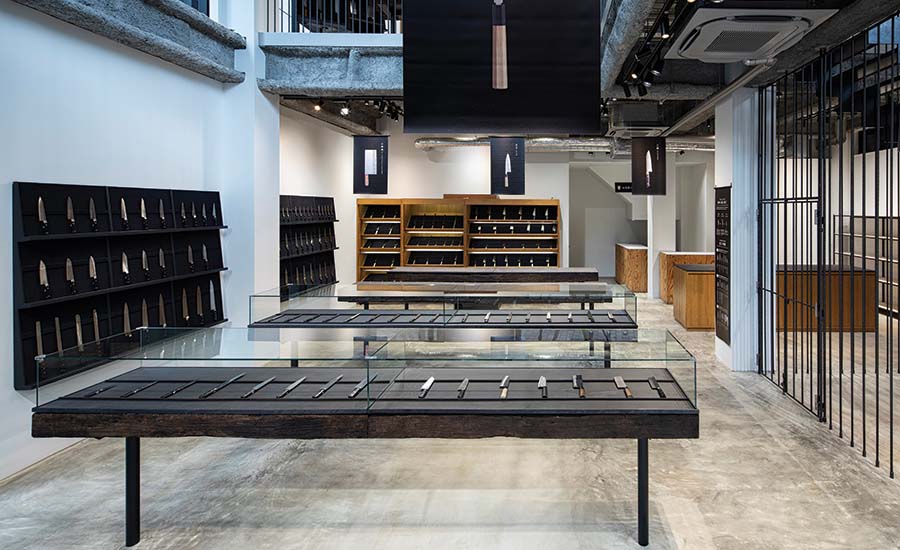 Adorned with a traditional noren curtain, the front entrance (3) leads into the Kama-Asa showroom for casual cooks (4 & 5). Photos © Keisuke Miyamoto 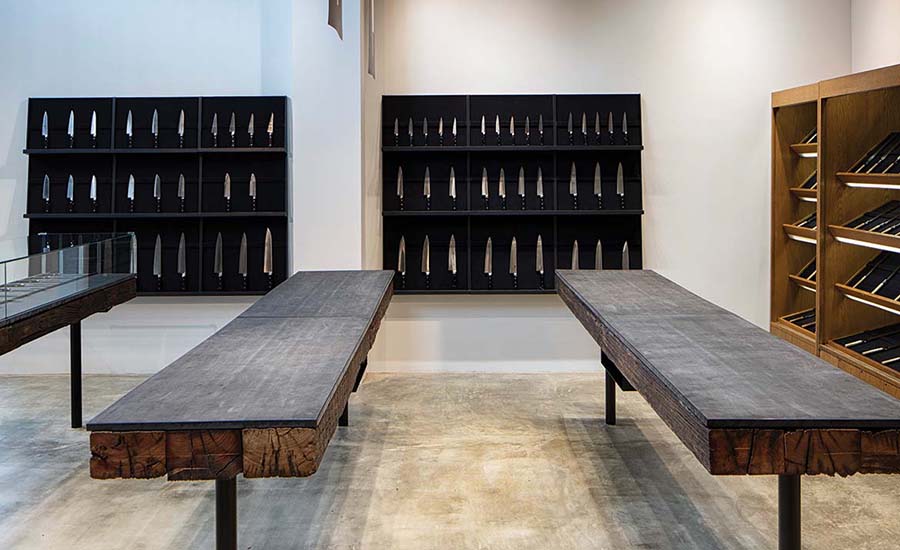 No doubt the bold building front stands out from the neighbors. But the shop’s most striking features are inside, where 20-foot-long display counters serve as giant cutting boards for customers to test out knives. Juxtaposing coarse with smooth, and delicate with brawny, each counter consists of spindly steel legs that support repurposed railroad ties sandwiched between razor-thin steel sheets and a 1-inch-thick layer of vinyl acetate, which serves as both the display and the cutting surface. Additional knives are presented in wall-mounted wooden racks made with parts recycled from the Yoshida-designed display cases that stood in the old store. Each shelf is covered with cloth that conceals magnets holding the blades in place.

Bowing politely to the client’s metalworking skills, rebar appears in various places. Rendered with the care and sensitivity of an artisan, the nubbly metal poles enclose the concrete stairs and encircle the void on the second floor as a balcony railing. “Even the handrails are made of rebar,” says the architect. Utilizing a construction material normally hidden from view as a finished element to be touched by the hand takes nerves of, well, steel. But Yoshida had confidence in the contractors’ ability to achieve this feat artfully. 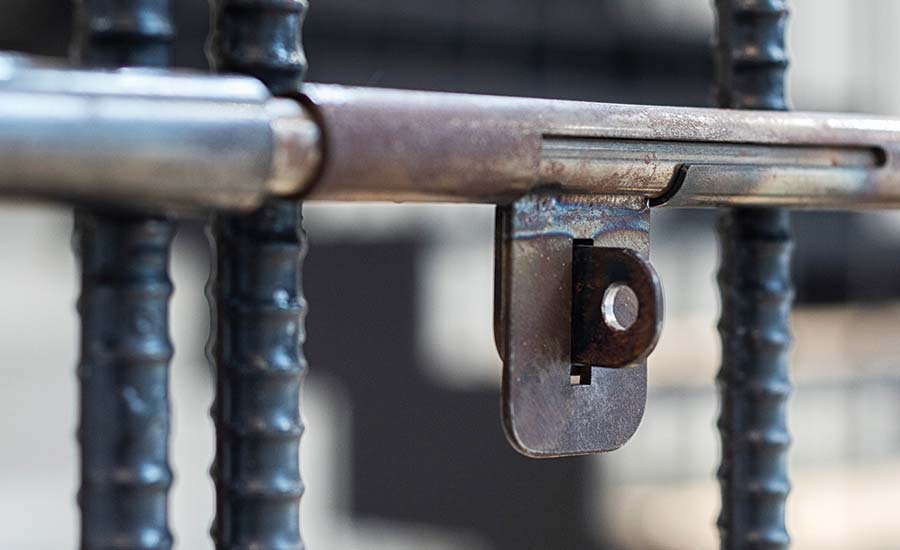 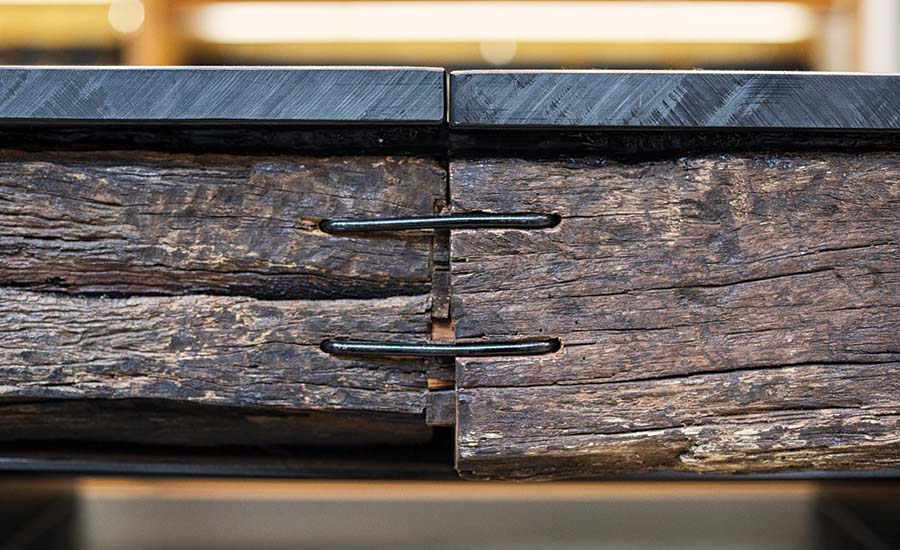 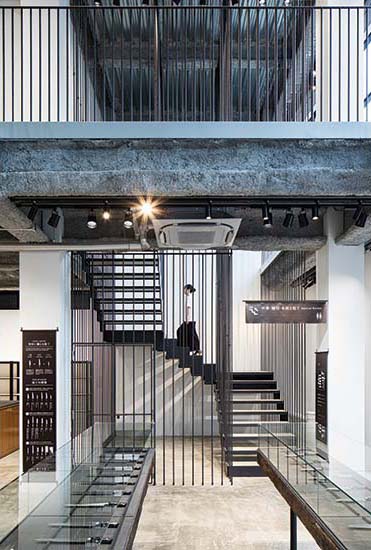 Industrial materials like rebar (6) and recycled railroad ties (7) articulate the stair and counters in the showroom (8). Photos © Keisuke Miyamoto

From a high-end sushi bar down to a convenience-store rice ball, one does not have to look far for the taste of tradition in Japan. Where the medium of architecture is concerned, however, finding ways to keep Japan’s rich history alive and relevant can be a challenge. The risk of sliding into the realm of kitsch is real. By embedding select elements from the past and rendering the mass-produced with the care and attention of a craftsperson, Yoshida gives Japanese tradition contemporary expression. 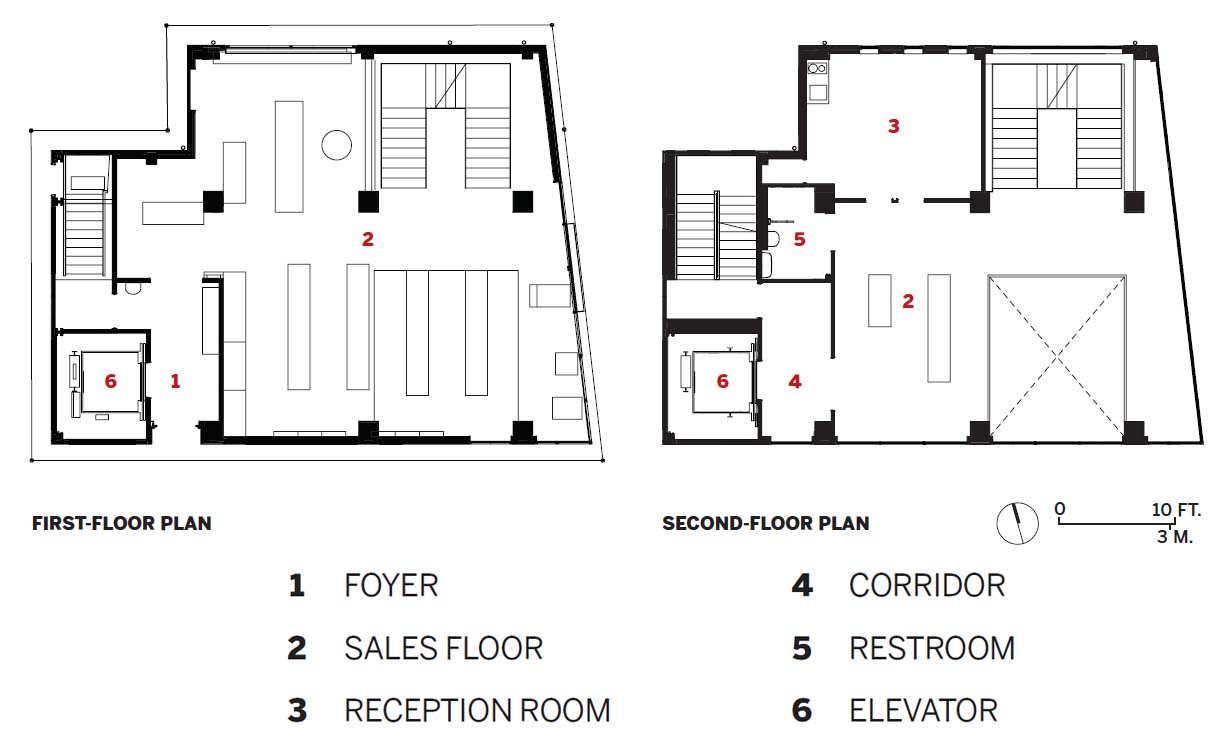