Traditional weddings in Japan are a big business. These sumptuous affairs often entail opulent multicourse meals, endless toasts, and several costume changes by the bridal couple, including elaborate kimonos. Because this garment is both expensive and expansive, many prefer to borrow rather than buy. Catering to that need, the Marusho Co., purveyors of partywear, decided to convert their showroom for rentable Western wedding finery to one tailored mainly to Japanese attire. Dating to 1989, the space, which occupies the second floor of the company’s six-story building in central Yokohama, had been adorned with white steel frames, glitzy chandeliers, and shiny stainless-steel surfaces, typical trappings of Japan’s bubble-economy era. The clients now wanted the design of their shop to reflect the history and timeless quality of the kimono—but with a contemporary twist befitting the 21st century. In architect Yoshimasa Tsutsumi, they found their best man.

Dividing his time between offices in Hiroshima and Beijing, Tsutsumi is making his mark with retail shops and restaurants that incorporate Japanese materials, detailing, and aesthetic sensibility. His first foray into the kimono world, the Marusho showroom is approached by stairs or elevator leading up from the first floor, where customers slip out of their street shoes. Upon entering, they are greeted by a single bridal kimono suspended in the customary T-shape to highlight its intricacy and brilliance. This display fronts the area designated for the bride: built-in closets and drawers for the garments and their accoutrements, as well as a dressing room. The grooms’ area on the showroom’s opposite side holds places to display, store, and try on morning suits and tuxedos. Lining the showroom’s perimeter are six semiprivate consultation booths at the rear, plus back-of-house staff facilities on either side. In the center of the showroom stand two massive three-quarter-height display units. Straddling the line between architecture and furniture, these define circulation through the space and house two-tiered racks of formal kimonos for the women in the wedding party—bright-colored garments for the young and dark ones with elaborate embroidery for older members. 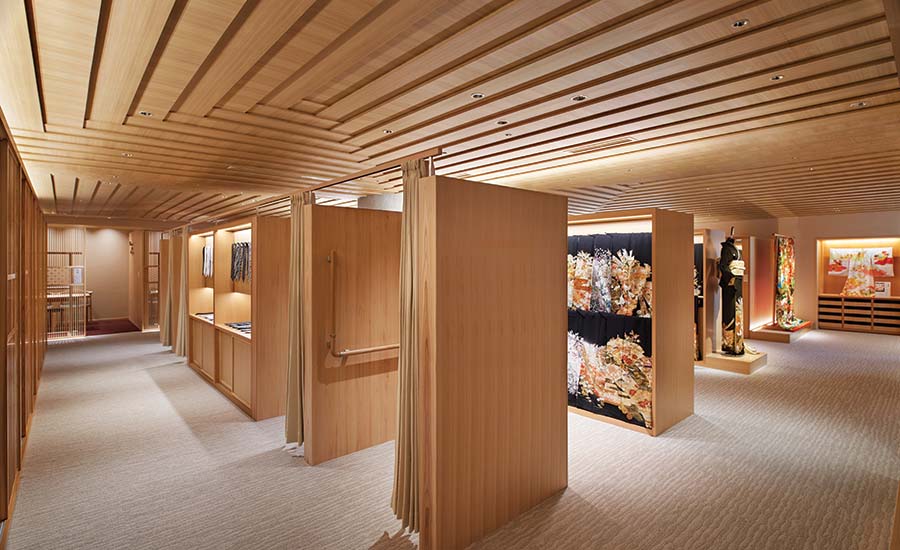 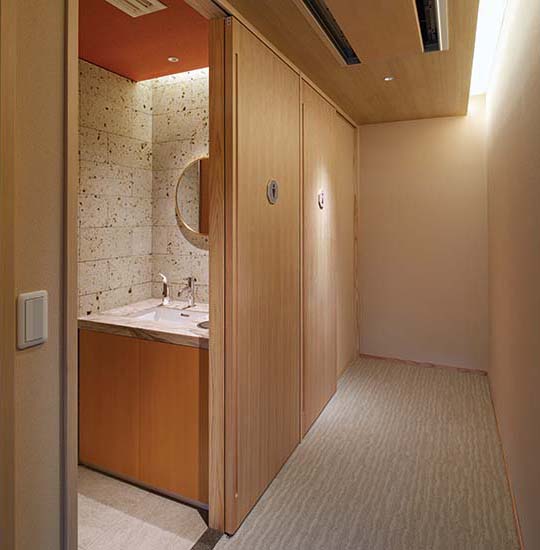 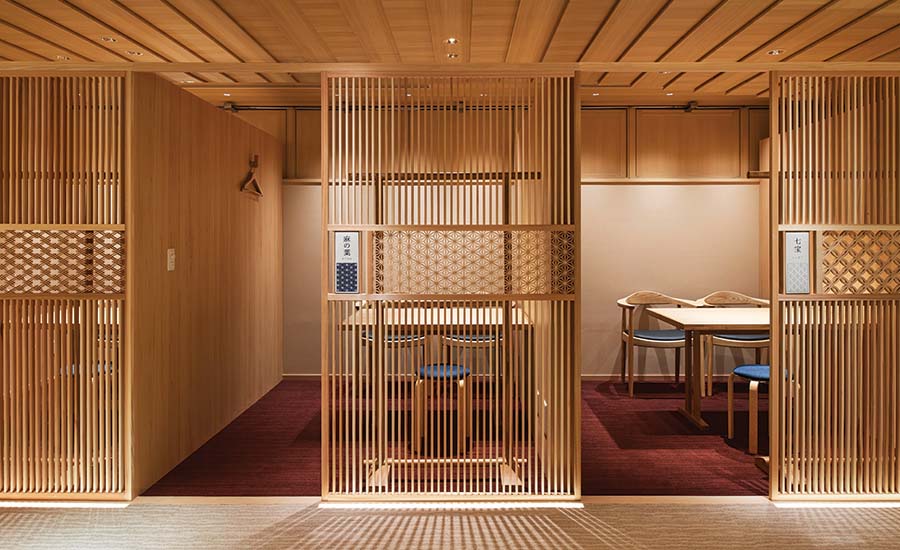 But the showroom’s architectural piece de resistance is its 9-inch-deep dropped ceiling. Rendered in overlapping wood slats, it was inspired by the neckline of the kimono, which is created by folding layers of fabric neatly across the front of the body. Decorative as well as functional, the stepped surface was designed to conceal the array of existing beams and HVAC ducts overhead. Due to these conditions, the room height drops to just under 8 feet at its low points—but Tsutsumi’s system of overlapping slats deftly draws attention away from that deficit.

Like the complicated but invisible underpinnings of the kimono, it took a well-concealed support system to create the ceiling’s elegant, tiered form. Hanging from the concrete slab overhead, a steel suspension system secures progressive layers of drywall wrapped with wood-grain-patterned plastic-coated paper. “It’s inflammable, cheap, lightweight, and easy to install,” explains the architect. The slats also incorporate the downlights responsible for the room’s soft illumination, which complements the surface-mounted fixtures inside the cabinets that highlight the displays.

Additional challenges that the building posed were its curtain wall windows and beefy concrete columns. Locating the back-of-house area behind the front facade enabled Tsutsumi to effectively block the windows altogether, turning the showroom into a separate world and protecting Marusho’s delicate wares (which are prone to fading caused by sunlight). This strategy also enabled the architect to bury two of the columns in the storage-lined wall. But there was nothing he could do to hide the third, which stands in the middle of the showroom. Instead, he turned the 4-foot-diameter cylinder into an ornamental element by coating its surface with textured bands of a mortar-and-earth mixture reminiscent of historic mud walls. 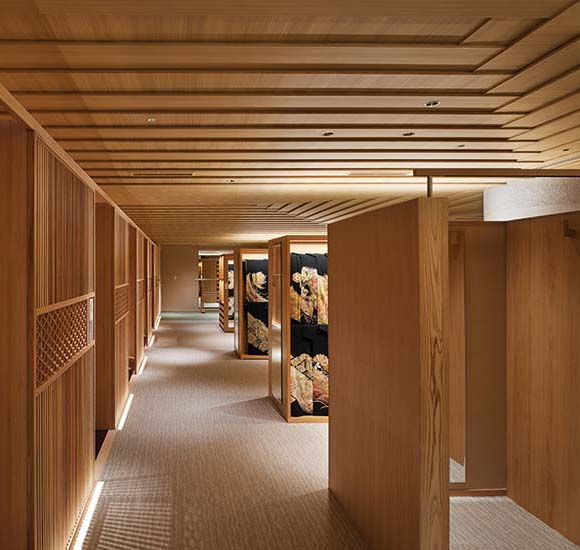 Throughout the showroom, materials are a means of artistic expression, traits of Japan’s traditional architecture born anew that do not compete with Marusho’s inventory. These richly appointed surfaces are perceived by other parts of the body as much as the eye—from the patterned carpet cushioning the customer’s stockinged feet to the cabinetry’s smooth cedar cladding and the delicate wooden fretwork of the sliding doors for the six consultation rooms, where apparel options are presented privately to the customer. Each door is adorned with a different kumiko panel composed of tiny wood pieces by Toyama Prefecture craftsmen. Even in the restroom, materials warranted special attention, with bengala red washi paper to cover the ceiling and walls of Oya volcanic stone (a Frank Lloyd Wright favorite).

Incorporating tradition without being trite can be tricky. But, in Japan, tradition is not a static entity. On the contrary, the old ways are subtly updated again and again as they pass from one generation to the next. By marrying today’s technologies with yesterday’s materials, textures, and colors, Tsutsumi adroitly proves this point. 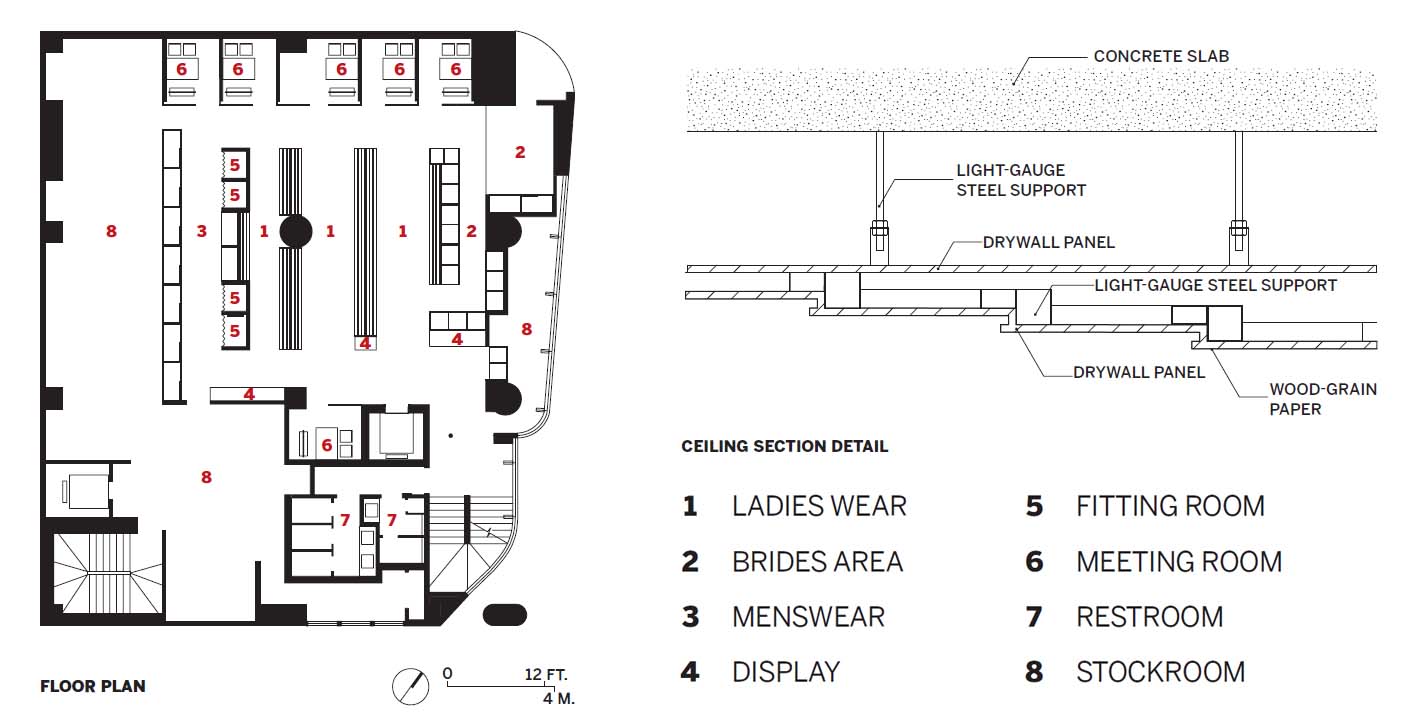